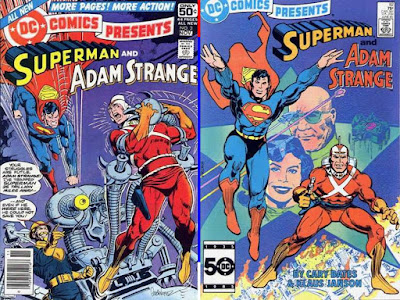 Superman was a baby when he was rocketed from Krypton to Earth, while Adam Strange was an adult when he was struck by a Zeta-Beam and transported to the distant planet in the Alpha Centauri system, Rann.

But, both of these men were able to find love on their new homes, as well as plenty of menaces to face as well, Superman with his powers and morality, Adam Strange with a few weapons he picked up on the planet and his scientific knowledge.

Though they originally met via the Justice League of America, they did have two adventures together.... 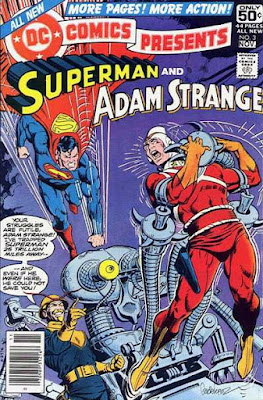 Superman thought he was returning home to Earth from a space mission in DC Comics Presents #3 (November, 1978) by David Michelinie, Jack C. Harris and Jose Luis Garcia-Lopez, but it was really Rann he was headed home to in "The Riddle Of Little Earth Lost", while Adam Strange was dealing with menaces on Earth.  Superman found Rann in the position of Earth in the Sol System, and, found Adam's wife, Alanna, and her father, scientist Sardath, in the capital city of Ranagar, and dealt with a few menaces by using his brains (like Adam Strange usually does).

It was found out that the planets switched when an experiment of Sardath's on the currently Rann-locked Adam Strange that somehow switched the planets positions (with Adam remaining where he was).  On Earth, Adam Strange stopped a few threats of his own, meeting Lois Lane, and getting information at the Daily Planet, which led him to the source of the transformation, and the man behind it, Kaskor, who had once tried to rule Rann, but now wants to destroy it.  Kaskor stabilized the Zeta-Bean energy on Earth, so it wouldn't move, while Rann's charge would wear off, causing both planets to occupy the same space and explode.  Superman traveled the distance between Earth and Rann, arriving in time to free Adam, and the two came up with a plan to move a space warp just in front of Earth, to allow it to move to its original position if Superman gave it a little nudge, when Adam Strange detonated a ship to move the warp to that point in space as his Zeta-Beam charge wore off (so he would be back on Rann as the ship exploded).  The plan worked, with Clark Kent on air giving thanks to Earth's "newest" hero, while Adam got to enjoy time with Alanna as he was finally home again with her. 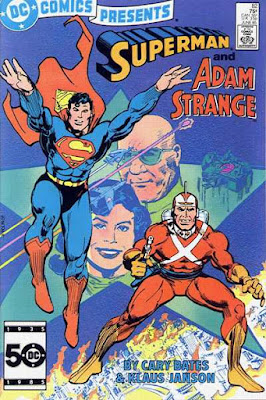 Adam Strange and Superman had a second solo team-up in DC Comics Presents #82 (June, 1985) by Cary Bates and Klaus Janson, where they dealt with "The Ghost Of Krypton Past!".

Adam's wife, Alanna, had been having dreams about Rann exploding and speaking in Kryptonian, so, Adam called on Superman for help.  When Superman arrived, he confirmed that Alanna was speaking his people's dead language, and that Rann was now occupying the same relative space as Krypton did when it exploded.  Alanna was also being possessed by a Kryptonian demon, Zazura, who planned on exploding Rann like Krypton.  Superman and Adam had to work together to free her, but found her dreams weren't being caused by Zazura, but by the spirits of the Kryptonians who had perished, who helped Superman against Zazura, allowing Adam to have his wife back, free of catastrophic dreams.

Who Is Adam Strange? 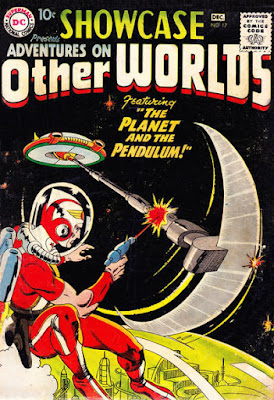 Adam Strange is an archeologist, who, while on a dig in Peru, ended up being struck by a Zeta-Beam and transported 4.3 Light Years to the planet Rann in the Alpha Centauri, where he met the lady Alanna, saving her from a menace, being taught their language and  going home to meet her father, Sardath, all in Showcase #17 (November-December, 1958) by Gardner Fox, Mike Sekowsky and Frank Giacoia, under a cover by Gil Kane.    Adam's basic scientific know-how would allow him to defeat fantastic threats, with the help of a spacesuit, ray gun and jet pack given to him.  When the Zeta-Beam charge wore off, Adam would be teleported back to Earth, but he was given a schedule of when the Zeta-Beams should strike next, and made plans to return to Rann.

This series continued through the next two issues of Showcase, then became a regular feature in Mystery In Space, starting with the August 1959 53rd issue, with stories still by Fox, art now by Carmine Infantino, and usually inked by Murphy Anderson, though the first was by Joe Giella. 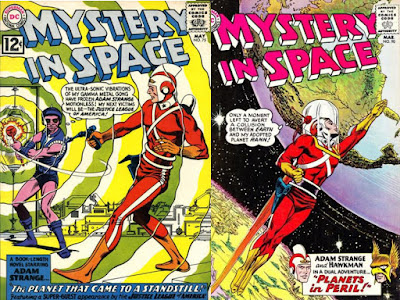 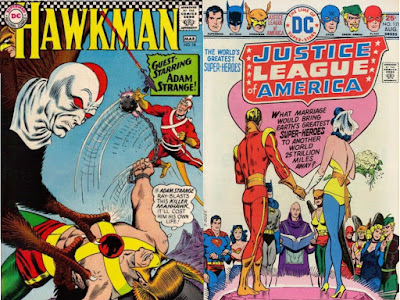 Adam's regular series ended with Mystery In Space #102 (September, 1965), but thankfully, his friends helped him out, with Adam and Alanna appearing in Hawkman #18 and #19 of 1967, and after a few solo appearances, and sorting out some of Adam's problems,  the Justice League was able to attend Adam and Alanna's wedding in Justice League of America #121 (August, 1975). 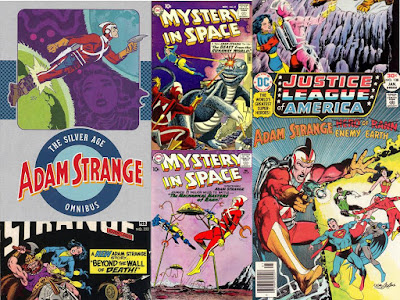 Adam Strange's Showcase appearances, as well as all of his Mystery In Space stories, Hawkman #18, and Strange Adventures #222 and #226 are in the Adam Strange: The Silver Age Omnibus, with a few of his Batman team-ups in Brave and the Bold collections, and his Justice League of America stories in their collections, as well as his part in the Invasion!, and check back for more on Adam Strange, including future ties to the L.E.G.I.O.N., R.E.B.E.L.S., the Rann-Thanagar War and the Justice Leagues.
Posted by Dave's Not Here Comic Blog at 4:11 AM