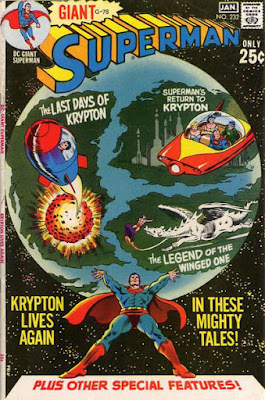 Superman's homeworld of Krypton took the focus of one of the last of the 64 page DC Giants to run in Superman's title (with only one after, then a few 100 Page Super Spectaculars just to keep readers happy with collections of older tales), with Superman #232 (December-January, 1970/1971) also known as Giant #G-78, with a cover by Curt Swan and Murphy Anderson.

These reprints had a bit of a purpose, and this incredible cover was just the beginning of new happenings in the Superman titles.

But, first, the stories contained within the Giant.... 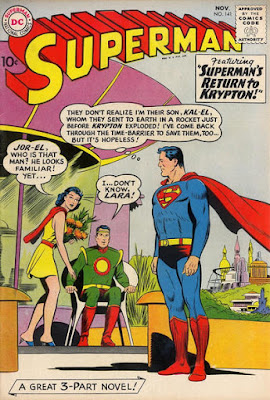 The main tale of the issue was "Superman's Return To Krypton", a full length tale from Superman #141 (November, 1960) by Jerry Siegel, Wayne Boring and Stan Kaye, with an original cover by Curt Swan and Stan Kaye.  This tale took into account many of the additions to Superman's Kryptonian history, and presented them as Superman had accidentally time traveled to Krypton before it exploded, where he was trapped, due to not having powers on Krypton.

Superman had to find his way around, being mistaken for an extra on a Kryptonian movie set for "The Space Explorers", meeting his parents, Jor-El and Lara, on the day they were married and attending the ceremony, then going to work for Jor-El as he attempts to save the inhabitants of Krypton from the upcoming explosion with a fleet of space arks. 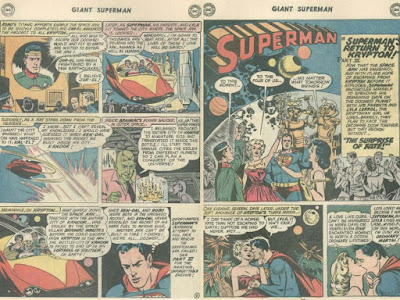 Superman, going by Kal-El, even falls for Lyla Lerrol, a famous actress, as well as meeting Krypto's parents, helping out Jonathan Kent and Martha Clark on Earth via long range telescope, but, for all he did, Superman was unable to change anything, as the equipment to build the space arks was in Kandor, which Brainiac came to shrink and capture, insuring the doom of Krypton.  Superman then got caught in a launch of a prop ship for the movie company, which took him out of Krypton's area, allowing him to time travel home. 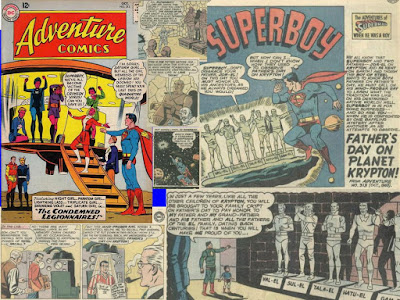 This time around, it is "Father's Day On Planet Krypton", though the Superboy story from Adventure Comics #313 (October, 1963) by Leo Dorfman and George Papp don't quite get to celebrate in style (not making the cover, as the Legion of Super-Heroes tale did).

Still, it was quite an adventure for the Boy of Steel, after making a gift for Pa Kent, young Clark Kent went to the Mind-Prober Ray to learn of how Father's Day was celebrated on Krypton....and that each Kryptonian house had a fortress with statues of their ancestors, which Kryptonians were suppose to honor at a certain age.

Superboy had ended up on Earth before this happened, so he had a little extra mystery to solve, as well as being tormented by Jax-Ur, a Kryptonian criminal from the Phantom Zone, and, the fact that, while he found the statues in space, they had been turned to Kryptonite!  Still, Superboy did beat these obstacles, and discovered more on Val-El, Sul-El, Tala-El, Hatu-El and Gam-El. 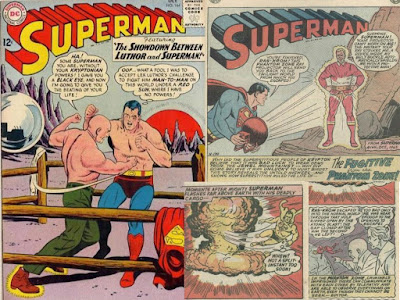 Next up is "The Fugitive From The Phantom Zone", a back up tale from Superman #164 (October, 1963) by Edmond Hamilton, Curt Swan and George Klein, with a new threat to Superman's life (though he had his hands full in the front of this issue as well).

Kryptonian criminal Ras-Krom escaped from the Phantom Zone after the detonation of a nuclear bomb.  Disguising himself as "The Old Man from the Cosmos", he tried to steal nuclear weapons to open a rift to allow the rest of the Phantom Zone villains out, but, while fighting Superman, revealed his fear of ancient Kryptonian superstitions, which allowed Superman to herd him Ras-Krom to where he needed him to be, to nullify a device the criminal created to prevent Superman from sending back into the Phantom Zone. 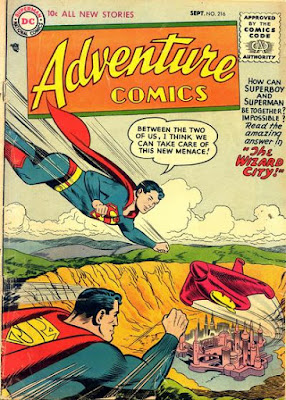 Adventure Comics #216 (September, 1955) has "The Wizard City" by Bill Finger, Curt Swan and George Klein (under a cover by Curt Swan and Stan Kaye), which appears to be a story of Superboy teaming up with Superman?

Well, there is a team-up in the story, but it was Superboy getting help from a professor that had been lost in the African jungle, looking for a meteor that had crashed there.  That meteor was the remnants of a Kryptonian city, so Superboy couldn't go into the area, as it had been turned into Kryptonite, so he dressed his new pal as Superman, to confuse Vedders, the guide who abandoned the explorer to another city, that of ancient knights, who had gotten lost in Africa.  Superboy helped the new "Superman" to defeat Vedders, bury the city to keep others away from it, and take the lost knights to civilization.  Then, Superboy was able to reunite the explorer with his son, Jimmy, who proclaimed Superboy would forever be his pal for finding his dad, Professor Mark Olsen.  Shame Jimmy was too young to get a picture of the occasion.... 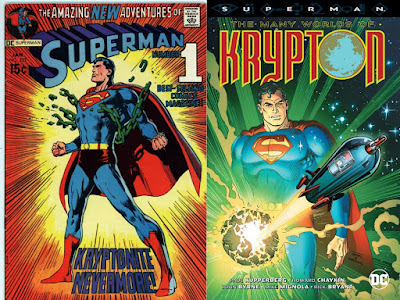 This Giant set up for the next issue of Superman, which signaled a turning point for Superman, marking the start of the Bronze Age, along with the destruction of all Kryptonite on Earth (for a time), as well as a new back-up feature for the Superman title, the World of Krypton, of which many tales were based on the tales presented here (and collected in the recent tradepaperback of Superman: The Many Worlds Of Krypton, along with more modern interpretations of Superman's home from two World of Krypton mini-series), all to showcase the planet that is home to Syfy's newest series, Krypton, which showcases Superman's grandfather....and more.