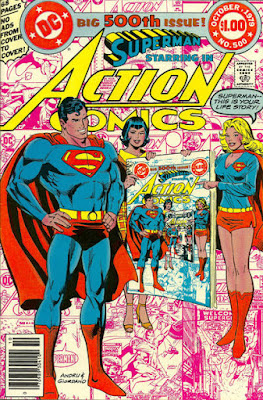 Looking at a very special issue of Action Comics and the life and times of Superman, halfway to 1000, here is Action Comics #500, which "is something very special.  It is the first comic book ever to reach its 500th issue!  And the reason it has lasted so long can be summed up in one word: Superman!". 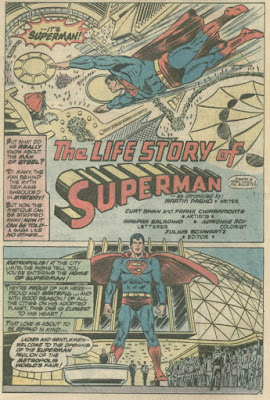 This issue features "The Life Story Of Superman" by Martin Pasko, Curt Swan and Frank Chiaramonte, and had originally been prepared for an All-New Collector's Edition, but instead found its 64 pages in this special issue instead.

This is the most complete telling of the story of the Earth-1 Superman, covering his life from Krypton, to landing in Smallville, then arriving in Metropolis.  So, time to leap into the contents of the issue, as Superman did, by arriving at the Metropolis State Fair for the Superman Pavilion opening with owner J. Robert Arngrim, unaware of the danger that lurked there.... 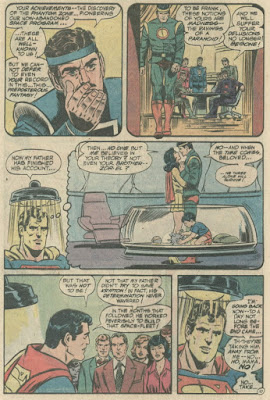 The planet Krypton was doomed.  The core of the planet was unstable, and set to explode.

Only one scientist, Jor-El, saw this, and had given up his space research to try to save the planet.  Jor-El was unable to convince the Science Council of Krypton's trouble (or even his own brother, Zor-El), so, instead, Jor-El put his efforts into saving his family....his wife, Lara, and two year old son, Kal-El.

An early test with Kal's dog failed, as a meteor hit the ship, sending it out of Krypton's orbit, getting the dog lost in space. 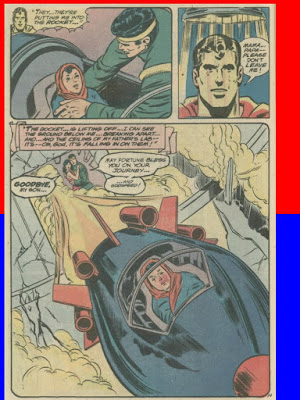 Still, Jor-El soldiered on, building a small ship, that had also been planned for a test, but had to be used as the end came sooner than Jor-El thought it would.

Jor-El was unsure it could safely get to its destination with Lara and Kal, so Lara volunteered to stay with her husband to die on Krypton to give their son the best chance at life.  Kal-El rocketed to Earth as Krypton exploded...

...an event so scarring it took Superman out of the Mind-Prober Ray he had been using to relive the events, and what of the young boy in a secret lab, being fed these memories by a mysterious scientist? 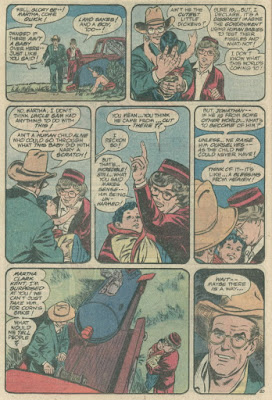 The next exhibit Superman and his friends were guided into was a representation of his time as Superboy in Smallville, but, to be fair, Superman recollected on his own starting with his rocket landing in a field and being found by Jonathan and Martha Kent.

The Kents took the boy to an orphanage in secret and hid his rocketship, but came back a few days later to adopt the lad, whom they suspected had extraterrestrial origins, naming the boy Clark Kent.  As a young lad, this Superbaby was hard on his clothes, but the Kents used the blankets he was wrapped in to make him an invulnerable suit he could play in, all while instilling their values on the boy, including a sense of duty, that he could use his powers to help others. 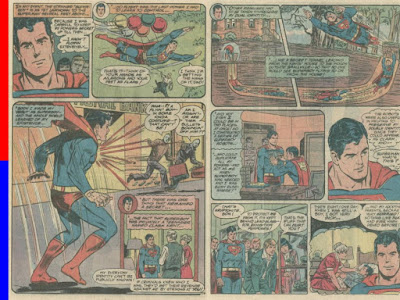 When he felt old enough, they modified the playsuit, using the belt from the ship as a belt, the upholstery to make boots and even adding emblem of the stylized "S", for Clark to go in action as....Superboy!  Clark added a slouch, changing his hair style and voice and glasses (with glass made from the window of the rocket) to make Clark Kent appear different from Superboy, and set about to help the people of Earth from many dangers, including those of Kryptonite artifacts that hit the Earth (like the Phantom Zone Projector, which Jor-El had used to exile Krypton's most dangerous criminals). 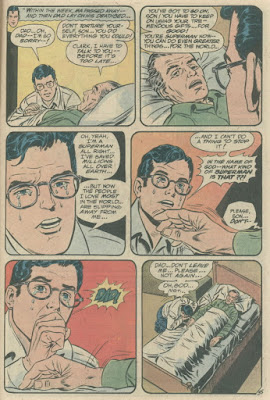 Superboy also dealt with Kryptonite, and Superman theorized all these Kryptonian items ended up on Earth due to the untested nature of the ship that brought him to Earth, which left open a rift from Krypton to Earth for a time after the rocket landed.

This may have eventually dragged the rocket that Kal-El's dog into space to Earth, so Superboy had a super dog, Krypto, who had the same powers as the lad did.  Superboy protected Smallville, including friends like Lana Lang, but, was unable to save those he loved the most, as his parents contracted a Caribbean virus after a vacation there and fell ill.  Even with his powers, young Clark was unable to save his adopted mother and father, and truly doubted his ability to become a Superman, as Clark and Superboy moved on from Smallville....(meanwhile, the mysterious scientist directed a young teenager in a Superboy suit through a mock town, mirroring Superman's journey from Superboy to Superman). 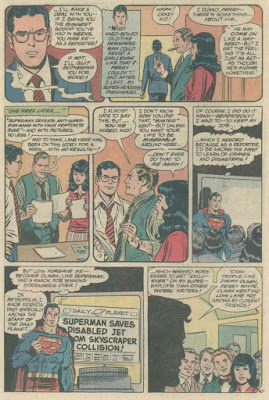 Then, after a time, the grown-up Superboy, Superman, was seen protecting Metropolis (as Clark Kent attended Metropolis University for four years, getting a degree in Journalism, and perfecting his act as a bit of a klutz to direct attention away from Clark Kent ever being Superman).  Though mild-mannered, Clark Kent showed enough aggression to impress Perry White, getting a scoop on Superman (beating out current Daily Planet reporter Lois Lane) to get a job with her at the paper, where he would work with her, and his pal, Jimmy Olsen, one of the Daily Planet's photographers, later, Lana Lang would follow from Smallville, and the paper would be bought by WGBS, taken over by a conglomerate run by Morgan Edge, who would make Clark Kent an anchorman, with sportscaster, Steve Lombard and cameraman Josh Coyle. 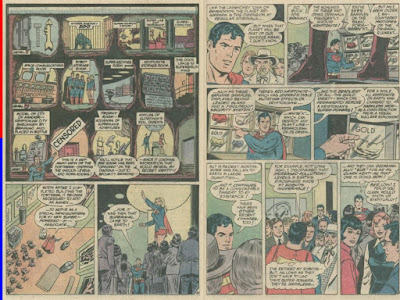 Superman settled into an apartment that a reporter could afford (storing a few non-Super costumes, as well as a Superman and Clark Kent robot there), but stored most of his items that he had been gathering in his secret lair under the Kent farm house in a new place, his arctic Fortress of Solitude.  Superman had many items their, including the shrunken Kryptonian city of Kandor (which Brainiac had taken from Krypton before it exploded), Kryptonite samples, a super computer and a memorial to Krypton, Jor-El and Lara.

Superman even added a little extra space for his cousin, Supergirl (Kara Zor-El, the daughter of Zor-El), who ended up on Earth later in Superman's career, that trained in secret for a time, before establishing her own heroic career.  Superman also reflected on his loves (such as Lana Lang, Lori Lemaris and Lois Lane), and foes (like Toyman, Parasite, Brainiac), but then, was secretly exposed to Green Kryptonite and replaced by another Superman, and fell to the mysterious scientist had been behind the scenes before....Lex Luthor. 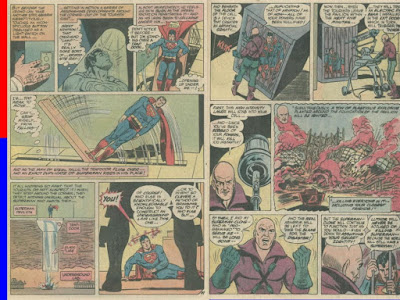 Luthor, being Superman's most dedicated foe, planned on using the introduction of the Superman Pavilion to kill Superman, and replace him with an exact clone, putting Superman's memories into the growing clone as Superman recalled them.  The Pavilion would explode as Superman's friends left, killing all the people who might have suspected the clone wasn't Superman.  Luthor could only interrupt the memory transfer once....to change what the clone thought of Luthor by changing Luthor's origin (with the clone telling the story to the crowd, of how Superboy ruined Luthor's life out of jealously in Smallville, upsetting Lana and Lois, getting Lois to head to the exit and trigger the bomb). 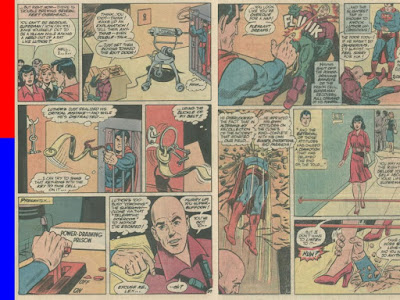 Superman had to think fast, and used his Kryptonian belt along with Clark Kent's tie (which Luthor was unaware Superman had, as Luthor wasn't able to monitor the memories) to escape Luthor's cell, stopping Luthor, saving Lois and his friends, then having a quick battle with the clone (which ended with the clone being exposed Gold Kryptonite, removing his powers forever), making this just another average adventure of Superman! 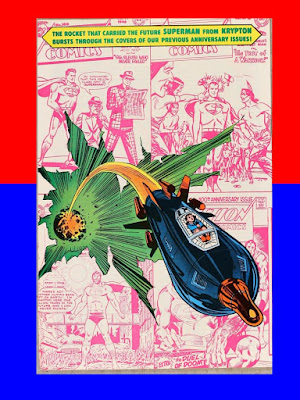 The issue also had a back cover, which featured the covers of issues 100, 200, 300 and 400 with Kal-El's rocket bursting through the center, and a inside front and back cover history of Action Comics by E. Nelson Bridwell, which started with the quote used at the beginning of this article, and ended with "What's coming up for Action Comics?  Will we one day celebrate our 1,000th issue?  If we do (and right now, we don't see why not), one thing is certain -- it will still be starring Superman!".

A month and a half from now, we will see that issue!