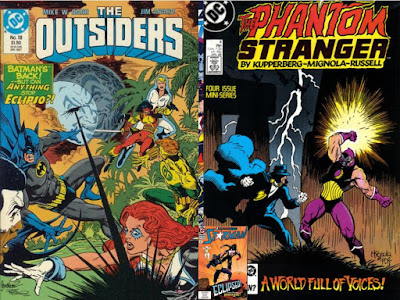 Thinking about the moon makes you think about the lunar villain, Eclipso, who had a small run of his own series in the House Of Secrets in the 1960s, then menaced a few select heroes like the Justice League of America, Metal Men and Green Lantern in the 1970s and 1980s....

...but, after the Crisis On Infinite Earths, Eclipso was working his way up to bigger and better things!

Those things included appearances in the Outsiders, Phantom Stranger and Starman.. 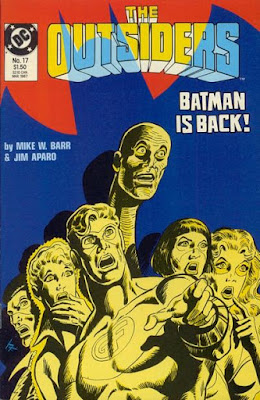 Eclipso returned in Outsiders #17 (March, 1987 by Mike W. Barr and Jim Aparo), with "Do Not Go Gentle Into That Good Night--!", but it was the return of Batman that took the focus of the cover.  Batman had left the team about the time Looker became a member, but fate had a way of bringing them back together again.

A series of museum robberies put Batman and the Outsiders on the trail of the People of the Dark, and their high priestess, leading the Outsiders and Batman to the island of Diablo, where the Prime Minister of the land recounted the origin of Eclipso, how high priest Morphir scratched solar scientist Bruce Gordon with a black diamond during an eclipse....and Gordon was on the island at the time continuing his research along with his fiancee, Mona Bennet.  The high priestess and her cult captured Batman and the Outsiders, who met Bruce Gordon, whom the priestess was using in a ceremony during the eclipse to reform...Eclipso (who must have reformed slightly during the Crisis, but had been bodiless since his last appearance facing off against John Stewart during his early run as Green Lantern.  The Outsiders figured to wait until the eclipse passed to face Eclipso (since he was most powerful at this time), except...Eclipso made sure the eclipse wouldn't end! 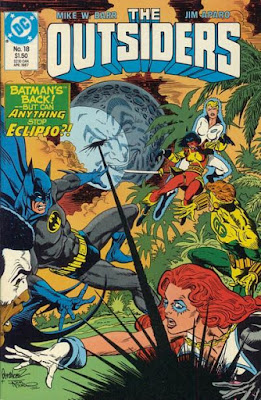 Then, in Outsiders #18 (April, 1987, by Mike W. Barr and Jim Aparo), the team would "...Rage, Rage Against The Dying Of The Light!", trying to find a way to stop Eclipso's artificially continuing eclipse.  The team was well suited to face Eclipso, with Black Lightning and Metamorpho working in tandem, Halo's light powers, Looker's mind powers, Geo-Force's gravity and Katana's mystic blade, but Eclipso revealed that he is "no mortal man, but the personification of a concept", allowing him to survive their attacks, and still grow stronger, until the team again combined their attacks under Batman's direction to weaken him and trap in the one prison that had held him for years...the body of Bruce Gordon.

This ended the immediate menace, but began a more tortured life for Dr. Bruce Gordon again... 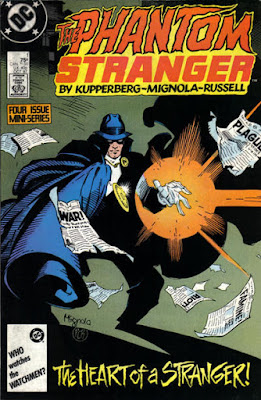 Both Bruce Gordon and Eclipso were on hand next for the four issue mini-series of the Phantom Stranger from the 1980s, where Eclipso would again threaten the Earth.  The Phantom Stranger himself was only beginning to reform in Phantom Stranger #1 (October, 1987 by Paul Kupperberg, Mike Mignola and P. Craig Russell), but events were happening in Gotham and Metropolis (as well as the rest of the world) that would require his attention and "The Heart Of A Stranger".  Commissioner James Gordon was finding the remains of a mob hit, while Jimmy Olsen found ties to the Russian mob in Metropolis, and the United States and Russia were approaching a state of war as natural upheavals were taking the Earth, with S.T.A.R. Labs scientist, Jenet Klyburn trying to piece together the troubles....and Bruce Gordon, knowing that there is trouble wishes someone would help him against it.

Phantom Stranger faces Lycaon and his cult, with a little help from James Gordon against a demon, then confronts Eclipso, who, working with the Lords of Chaos and claiming to have just found magic, is subtly working to destroy the world, hiding his plans from all the usual heroes....with the Phantom Stranger looking for new allies, finding a disheartened Bruce Gordon. 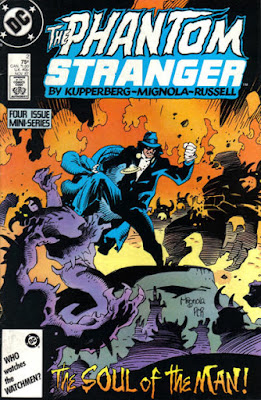 With Phantom Stranger #2 (November, 1987, by Kupperberg, Mignola and Russell), it is a fight for "The Soul Of Man!", with Eclipso tormenting Bruce Gordon via their mental link, but the Phantom Stranger working on Gordon's behalf.  Jimmy Olsen continues to follow his leads on the Russian mob, while the world gets worse, and Gordon and the Phantom Stranger find they will get no help from the Lords of Order, but instead go to recruit Jenet Klyburn, with the trio going to research a disaster site.

While there, they discover the mystic connection to the supposed natural problems the Earth is having, with the doctor taking action to help Phantom Stranger and Gordon stop this particular problem, while Lycaon and his cult grow in power, as does Eclipso.

With one end of Earth ended, Eclipso focuses his mind on the next two. 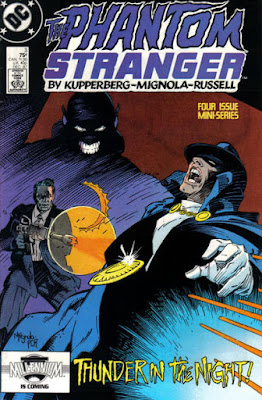 Tensions between the U.S. and U.S.S.R. get worse, with Valentina Volstok (Negative Woman of the new Doom Patrol) working for the U.S. government trying to find the cause, with Jimmy Olsen finding the Russian mobster has ties much further up than he thought, being pursued by a demon Russian mobster, with Phantom Stranger showing up to rescue him (instead of his usual pal, Superman).  Gordon, Olsen and the Phantom Stranger head to the White House, where it is found that the demon can shift bodies, and takes over the U.S. President, to begin World War III, with only the combined effort of the Phantom Stranger, Jimmy Olsen, Bruce Gordon and Ronald Reagan stop this world threat.  Meanwhile, Lycaon works out a TV deal, and Eclipso hoping his last mystic end to Earth will be the one to end all life on Earth. 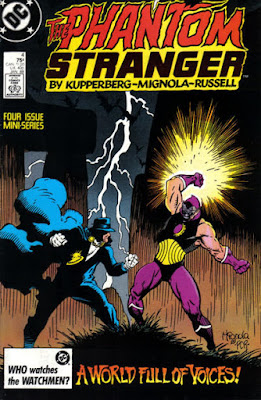 Phantom Stranger #4 (January, 1988 by Kupperberg, Mignola and Russell) offers "A World Full Of Voices" for Lycaon, or more accurately, a chance for him to expand his Temple of Divine Light with a worldwide television audience.   Eclipso plans to have Lycaon unite the world's will as one, and use the power that comes from that to destroy the planet.  Valentina Vostok tries to stop Lycaon, but fails, while the still all too human Phantom Stranger tries to gain power of his own at Stonehenge, getting into conflict directly with Eclipso, who uses his own black diamond against the Stranger.  All the while, Lycaon tries to unite humanity's will. with Bruce Gordon in the audience...and, as he does tap into the power of humanity, it pulls the Stranger and Eclipso to the studio, where the Phantom Stranger is able to stop Lycaon, tapping into that power instead to restore his own mystic might, ending the threat of Eclipso for a time (though Phantom Stranger would hand around with Bruce Gordon for a bit, during a run in Action Comics Weekly....). 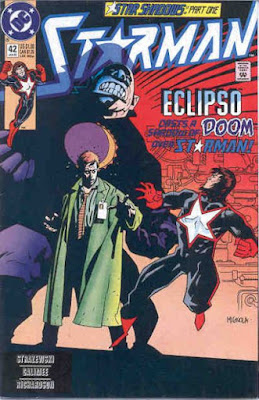 After resting for a while, Eclipso returned in Starman, stepping out of the "Star Shadows" for a four issue run, starting with Starman #42 (January, 1992, by Len Strazewski, John Calimee, Andrew Smith, Roy Richardson and Alan Kupperberg.  The solar powered Starman (Will Payton) is having overload problems with his powers, and goes to get help from Dr. Kitty Faulkner of S.T.A.R. Labs (who is also the solar powered heroine, Rampage).  While there, Starman meets Dr. Bruce Gordon, who is a solar scientist, with Kitty letting Will know Bruce knows her secret, and Will and Bruce swap origin stories, (with Will's being he became Starman after being struck by an energy beam from space).  Gordon suggests they take his solar jet into space so he can get readings off of Starman in order to diagnose his condition, and off the two go.

While in space, their ship runs into intergalactic bounty hunter Lobo, and, while Starman is occupied with him, the moon crosses the sun, turning Bruce into...Eclipso! 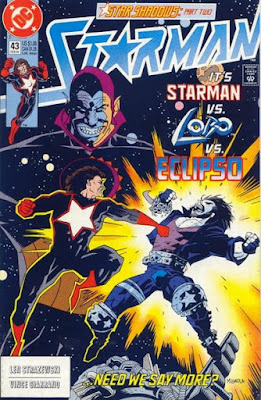 With "Blue Moon" from Starman #43 (February, 1992 by Len Strazewski and Vince Guarrano), it is revealed that the Lords of Chaos put Lobo on the hunt for Eclipso, for his failing to destroy the Earth, offering Lobo quite the bounty.

Lobo and Starman fight on the moon, while Eclipso retrieves his black diamond and costume (which he had subconsciously gotten Bruce Gordon to hide on the solar jet).  Eclipso asserts that it was his satellite which had generated the energy beam which turned Will Payton into Starman, and that Eclipso had been using his heroic creation as an energy storehouse.  Lobo and Starman's battle eventually brought them to where Eclipso had landed the solar plane, and Lobo was ready to take in Eclipso for his bounty. 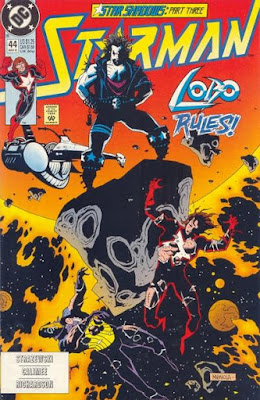 Lobo and Eclipso would battle on the "Dark Side Of The Moon" in Starman #44 (March, 1992 by Len Strazewski, John Calimee and Roy Richardson).  During that battle, Starman helped, separating the two for a bit, and getting a few facts from Bruce Gordon as Lobo had weakened Eclipso, figures its us (Starman and Eclipso) against them (Lobo and the Lords of Chaos), works with Eclipso to make Lobo think Starman had incinerated him, getting Lobo to leave with "proof" of Eclipso's death to get his money.

But, Starman then learns of Eclipso's duplicity, nearly getting brain damage, as the villain takes the solar plane on the run to head back to Earth and Kitty at S.T.A.R. Labs....leaving Starman behind, realizing he will need help to defeat Eclipso. 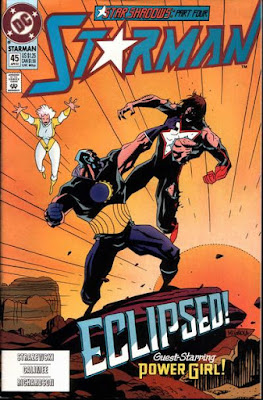 With Starman #45 (April, 1992 by Len Strazewski, John Calimee and Roy Richardson), Kitty is indeed there at S.T.A.R. Labs for the return of the solar jet, but instead finds Eclipso in "Starlight, Star Bright".  Eclipso defeats Kitty, even when she turns into Rampage, and Eclipso plans on using her as a power battery (letting slip that Gordon had gotten Eclipso's origin a little wrong, suggesting "there is a little of me in everybody".).  Eclipso's devilish plan to get more power from the approaching Starman is foiled, as Starman recruited help from Justice League Europe's Power Girl (a friend of his since the Invasion!), exposing Eclipso to the concentrated sunlight Starman can generate...bring back Dr. Bruce Gordon.  With the menace averted, Gordon is able to get answers for Starman's power surge, that it was natural, and he just has to get use to his new more powerful self. 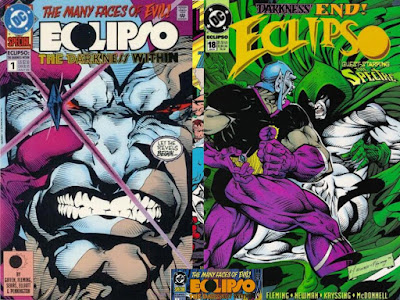 This ends up being the last issue of Will Payton's Starman, but Kitty, Bruce Gordon, Mona Bennet and especially Starman get to be involved in Eclipso's next plan, revealed over the course of the DC Annuals of 1992, as well as the 2 issue bookends of Eclipso: The Darkness Within (as well as Eclipso's 18 issue series), with seeds to Eclipso's true nature having been planted in these series, to enhance his history after his appearances in House of Secrets.