Superman and The Legion of Super-Heroes On The Moon 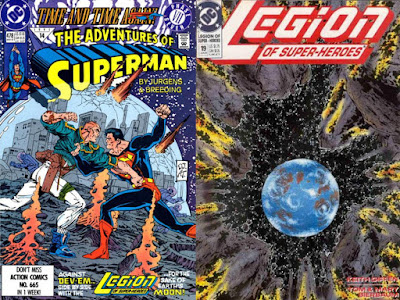 Superman and the Legion of Super-Heroes once met on the moon, and it was quite the disaster.

But, perhaps we're skipping a little a head of ourselves in this story....and that's exactly what Superman was doing at the time.

So, perhaps it would be better to step back a bit, to allow you to catch up.... 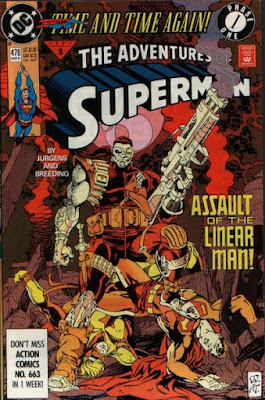 It all started in Adventures Of Superman #476 (March, 1991, by Dan Jurgens and Brett Breeding), with Clark Kent trying to get use to being engaged to Lois Lane, ended up having to help Booster Gold (the greatest hero you've never know) against a Linear Man (one of the self-appointed protectors of the timestream), who wanted to return Booster Gold to his proper time (Booster was originally a resident of the 25th Century, who "borrowed" some equipment from the Space Museum, to travel back in time to become a hero....).

The encounter did nothing to change Booster's status as a hero before his time, but did send Superman forward in time, where he met the charter members of the Legion of Super-Heroes (Cosmic Boy, Saturn Girl and Lightning Lad) early in their career, but for Superman, it was the first time meeting the Legion (after the Crisis On Infinite Earths, Superman hadn't had his career as Superboy, so hadn't met the Legion of Super-Heroes until recently...).

Lost In The '40s Tonight 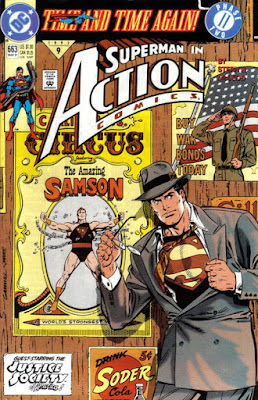 In Action Comics #663 (March, 1991 by Roger Stern and Bob McLeod), the Legion, busy with saving their city at the time, are startled to meet Superman, having not yet met him this early in their careers, get distracted, so an explosion there sends Superman back in time...


....all the way to 1943, where after a brief distraction at a circus, Superman gets the idea of enlisting the help of the then young and active Justice Society of America at their townhouse...but, the ghostly guardian, the Spectre, advises against that, rightfully saying that meeting Superman would mess up the JSA's history (which had already been changed in the aftermath of the Crisis On Infinite Earths so that they didn't have a Superman in their ranks), so sends the time-lost Man of Steel across the world to... 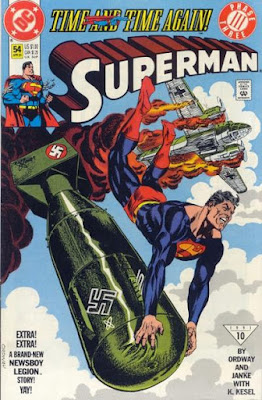 With Superman #54 (April, 1991 by Jerry Ordway and Dennis Janke), Superman did get more involved in World War II, messing up the life of the immortal General Zieten (whom Superman had just met in the modern day a few weeks previously, as Mr. Z, and where Clark's fiance, Lois Lane, was currently worried about the missing Clark Kent/Superman)...

....deciding to take a more active role in World War II due to seeing the suffering of citizens of Warsaw (unconcerned about historical damage he could cause), Superman tried to stop an experimental Nazi bomb, which exploded, engulfing him and sending him back to the future (but still beyond his own time....). 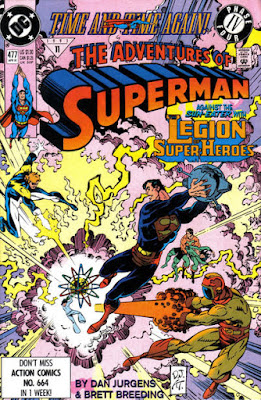 The explosion sent Superman into space, meeting the Legion of Super-Heroes again (further along in their timeline, with members of the team being Lightning Lad, Phantom Girl, Shrinking Violet, Ultra Boy and Wildfire...corresponding to their time in the 1970s, or is that 2970s?).

This adventure from Adventures Of Superman #476 (April, 1991 by Dan Jurgens and Art Thibert) against the menace of the Sun-Eater (a gaseous creature that....well, eats suns).

The Legion had a bomb that they planned to use to stop the creature, but, yet again, it was Superman who was there to help defeat the menace.

That bomb's explosion sent Superman back in time yet again... 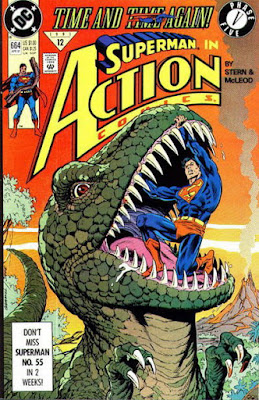 Back to Action Comics #664 (April, 1991, by Roger Stern and Bob McLeod), and to a meeting with a Tyrannosaurus Rex!

You'd think Superman would be alone at this time, but it didn't work out that way, as he met up with Atom's foe, Chronos, who had been trapped in this time period after a battle with the Blue Beetle.

Chronos had plans to return to his own time, but that was fouled up by Superman (so Chronos had to put himself in suspended animation and get home the long way, but even then, Chronos arrived to modern time early, letting him be better prepared for future battles with the Atom), while Superman ended up a little farther in the future (but still the past), and, with yet another explosion, ended up in... 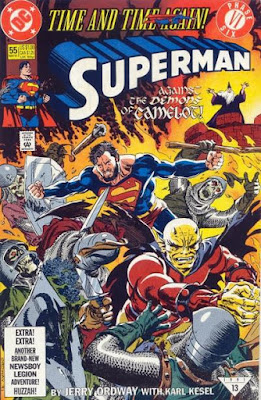 With Superman #55 (May, 1991 by Jerry Ordway), Superman found himself in the court of Camelot, as it was under attack by the forces of Morgan Le Fey and Mordred, and being protected by Merlin, and his demon, Etrigan.

Superman wasn't as much help against all the magic menaces that were around (as Kryptonian powers don't seem to work well against magic), so Merlin was forced to use desperate measures to save Camelot, bonding Etrigan to the human druid, Jason Blood, while Superman found himself yet another explosion, hurtling him into the far future once again (all the while, Lois wondering where Clark was...). 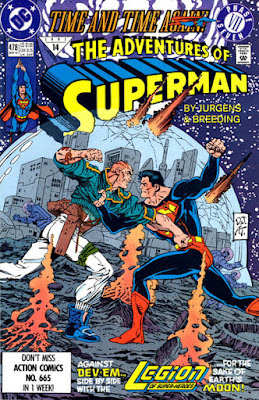 Getting readers of this article to where we started with, with Adventures Of Superman #478 (May, 1991, by Dan Jurgens and Brett Breeding), with Superman, and members of the Legion of Super-Heroes (from a period in their future called "Five Years Ahead" with members Cosmic Boy, Saturn Girl, Lightning Lad, Laurel Gand, Chameleon Boy (going by Cham), Shrinking Violet (going by Vi), Furball (formerly Timber Wolf), where their were facing off against a homicidal Daxamite by the name of Dev-Em, with plans to blow up Earth's moon (as the Earth at this time had been taken over by the Dominators).

Superman shows up, but this time, stops the explosion of the moon.  That's when the Linear Man shows up, knowing that the moon must explode at this time, and continues the countdown, resulting in the moon exploding (sending Superman back to his home time, and Lois, with the knowledge that the Earth will lose its moon in 2995....). 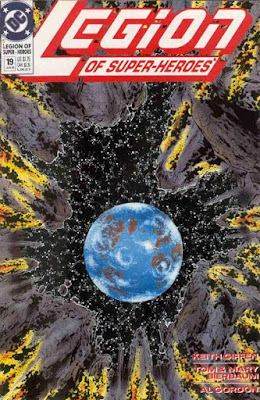 ...at least until time resets the Legion's future (which happens again and again for a while....).