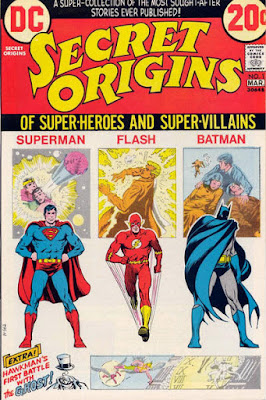 To be fair, the title was Secret Origins, and boy did it deliver.

With issue #1 from February-March, 1973, you got the origins of Superman, Batman and the Flash, as well as the first story of Gentleman Ghost (but, to be fair, no origin at the time for the supernatural foe of the Golden Age Hawkman and Hawkgirl).

All this under a beautiful cover by Nick Cardy, and edited by E. Nelson Bridwell.

Where did these tales come from, and how did they fit them all in one normal sized issue? 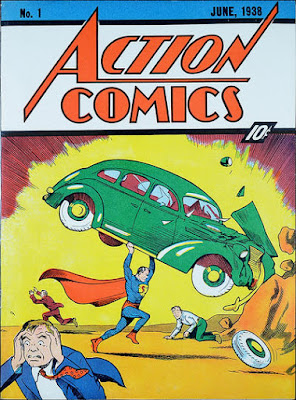 The origin of Superman was first up, and it was all of one page from Action Comics #1 (June, 1938) by Jerry Siegel and Joe Shuster, detailing how a boy rocketed from a dying alien planet to land on Earth, where he possessed powers and abilities far beyond those of mortal men, and would use them to fight the forces of evil...

....pretty straight forward and simple, and the first time this story had been seen in its original form in over 30 years!

So much more would later be added to this story, but everything you needed to know was on that page, even an explanation of how this man from another planet had super powers! 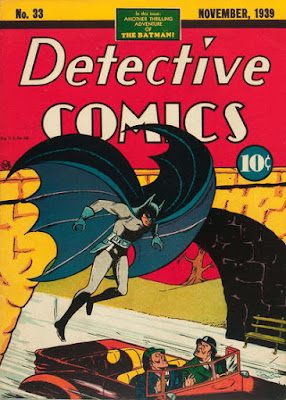 A little longer was the origin of Batman, detailing how young Bruce Wayne's parents were killed by a mugger, and that changed the boy's life, filling full of resolve, giving the rich young man an obsession to track down criminals, striking fear in their hearts by being dressed as...

This was two pages, the first two from Detective Comics #33 (November, 1939) by Bill Finger and Bob Kane.

Another origin that had so much added to it over the decades, but a strongly written and drawn beginning, sure to capture the imaginations of readers for years to come, as later telling of Batman's origins proved! 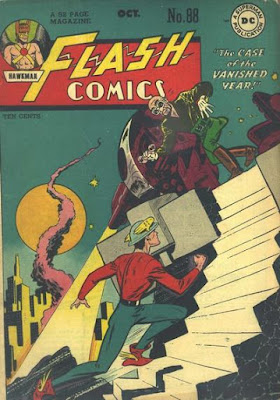 Now, the Ghost (later called Gentleman Ghost) didn't really get in origin in this tale from Flash Comics #88 (October, 1947) by Robert Kanigher and Joe Kubert, but instead started a mystery of whether or not this thief really was a ghost, as he faced off against the original Hawkman and Hawkgirl (though this cover was not the one they usually alternated with the Golden Age Flash), so likely this tale's reprint was included more at the behest of this book's editor, E. Nelson Bridwell (who was also working on a book called Wanted: The World's Most Dangerous Villains at the time, which reprinted classic confrontations of heroes and their greatest foes.....).

Still, it took quite some time, and a bit of travel over multiple Earths, but readers did get an answer to whether Jim Craddock was really a ghost (and, along the way, he even got to act the hero for a time!). 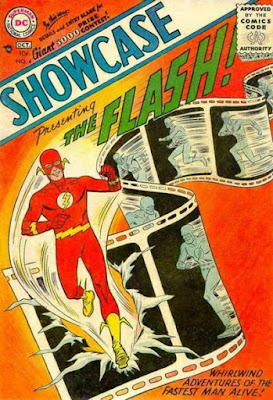 It was the origin of the Silver Age Flash which ended this book, though Barry Allen did read the adventures of Flash (Jay Garrick) from the Golden Age, with Barry's first appearance as the Scarlet Speedster from Showcase #4 (September-October, 1956) by Robert Kanigher, Carmine Infantino and Joe Kubert.  This details how police scientist Barry Allen was struck by lightning in front of a batch of chemicals, which gave the man super speed, which he used to keep his fiance, reporter Iris West safe, and, in this story, defeat the Turtle Man.

Best of all, editor E. Nelson Bridwell summed up a little of the additions to Superman and Batman's origins, as well as giving a little detail on Gentleman Ghost and the Flash, starting what would be a seven issue run of issues giving the origins of DC's greatest heroes (along with covers by Nick Cardy, where he would sometimes summarize the origin in one iconic image), all to get you excited about reading reprints (as had been done when DC collected many origins in 1961 in that Secret Origins book).

As a reader, who could ask for more?  Like Supergirl, Spectre or Robin maybe?
Posted by Dave's Not Here Comic Blog at 4:38 AM