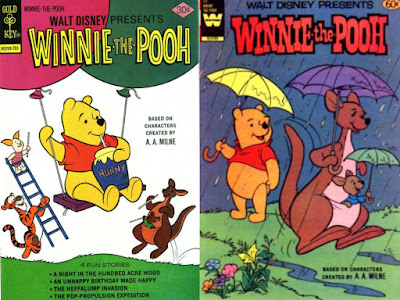 Oh, bother.  Something a little different and lighthearted today, celebrating the work of English author A. A. Milne (January 18, 1882 to January 31, 1956), covering Winnie The Pooh!

Alan Alexander Milne wrote stories in the 1920s about his son's (Christopher Robin Milne) teddy bear (Winnie The Pooh), and other of his stuffed animals, such as Tigger, Piglet, Eeyore, Kanga and Roo (and added characters of the Owl and the Rabbit). 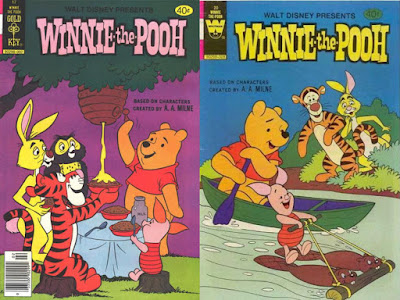 Though A. A. Milne had passed long before, Gold Key/Whitman published 33 issues of a comic book based on those works under the title of Walt Disney's Winnie The Pooh from January, 1977 to July, 1984, with the bear and his friends having adventures (including looking for honey) through the Hundred Acre Wood.
Posted by Dave's Not Here Comic Blog at 3:48 AM

Email ThisBlogThis!Share to TwitterShare to FacebookShare to Pinterest
Labels: A A Milne, Gold Key, Whitman, Winnie The Pooh