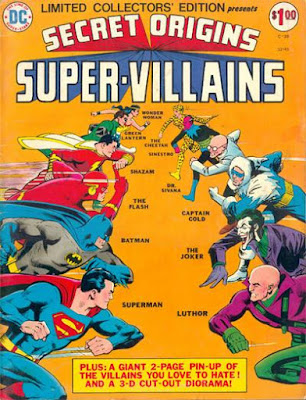 Looking back at all those Secret Origins, they all seemed to be heroes, though the title did promise there would be a few villains along the way.


Villains, having such big egos and working their own schedule (not willing to give up too many origins in Wanted: The World's Most Dangerous Villains), instead appeared in an oversized treasury edition, that of Limited Collectors' Edition C-39 of October-November, 1975, under this fighting cover by Dick Giordano, featuring Luthor, Joker, Captain Cold, Sivana (and a few more), facing their foes of Superman, Batman, Flash and Captain Marvel! 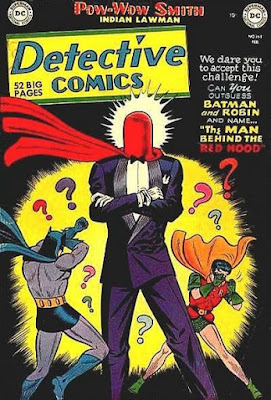 The Joker was first up, in Detective Comics #168 (February, 1951) by Bill Finger, Lew Sayre Schwartz and George Roussos, with "The Man Behind the Red Hood!", with Batman battling the Joker again, as well as a mysterious figure behind a red hood in a tuxedo.

Batman had to due some detective work to find out who was underneath the Red Hood, with a little help from Robin and some students, which led back to one of Batman's earliest cases where he faced this dastardly criminal before at a chemical plant near the Monarch Playing Card Company where his foe escaped by diving into a pit of chemicals.  This all lead up to a modern confrontation at State University with the Red Hood, and learning a little about how the Joker became the Joker, with the part Batman played in the clown prince of crime's origin. 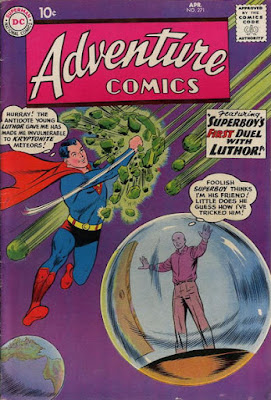 Adventure Comics #271 (April, 1960) by Jerry Siegel and Al Plastino explains "How Luthor Met Superboy!", as it seemed Superman and Lex Luthor's feud went all the way back to Smallville.

When Superboy first met Lex Luthor, Lex had a full head of brown hair, and was a fan of the Boy of Steel, saving him from a Kryptonite meteor.  To return the favor, Superboy builds Lex a laboratory!  Lex invents a formula to make Superboy immune to Kryptonite, as well as a living protoplasm....yet, gets absent-minded, setting the lab on fire.  Superboy comes in and blows out the fire with his Super-breath, which ruins the protoplasm, and causes young Luthor's hair to fall out.  Luthor then vows to avenge his misfortune on Superboy, inventing items to help the residents of Smallville, to take the spotlight away from Superboy (but his quick plans only make menaces, that Superboy fixes them, infuriating Luthor more).  Luthor tries to kill Superboy with Kryptonite, but fails, leaving Superboy to only hope they can be friends again.  (Spoiler, their battles continue on and on....and even include Batman and the Joker). 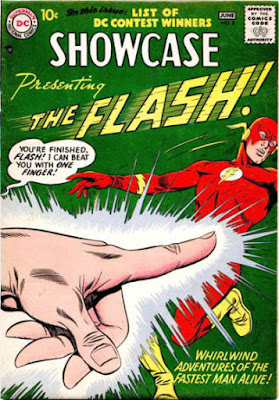 "The Coldest Man On Earth!" premiered in Showcase #8 (May-June, 1957) by John Broome, Carmine Infantino and Frank Giacoia, that man being Captain Cold (though Cold gave Flash, and readers the finger, by not being on the cover!).

Leonard Snart was a small time thief, who accidentally creates a cold gun to take out the Flash, using this weapon to rob a bank, which causes the Flash to show up to stop him.  Snart stops Barry Allen by freezing the street below his feet, then escapes to make more plans against the Flash as Captain Cold.  Using Helium, Captain Cold finds he can create cold illusions, then faces off against the Flash at a lake nearby Central City.  The Flash was too quick to be fooled by these tricks, and captures Captain Cold! 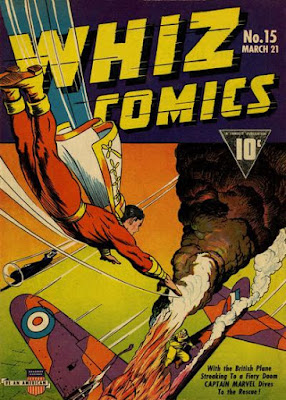 Though he premiered with Captain Marvel, Doctor Thaddeus Bodog Sivana had his origin told in Whiz Comics #15 (March, 1941) by Bill Parker and C.C. Beck.

Captain Marvel fought some villains, trying to escape them with Beautia Sivana leads him to say "Shazam!" and change back to Billy Batson, who then gets captured by Sivana and fights Gloppos, (Venusian Frog-Men) who lived on Venus, and Sivana's daugther, Beautia, explained how her father tried to invent items to help people on Earth, but was ridiculed, so built a spaceship to take her and her brother, Magnificus, to Venus, conquering its jungles.  Sivana returned to Earth to face Captain Marvel, many times, but this time Dr. Sivana has Billy trapped unable to turn into Captain Marvel using a device, that Billy eventually breaks, and faces Magnificus Sivana in a battle, injuring the scientist, whom Beautia wants to take back to Venus, where he will be no harm (though Beautia means well, that doesn't stay true, though at least Magnificus and Beautia remain Cap's friends, but Sivana's other kids, Junior and Georgia, join him to fight the whole Marvel Family). 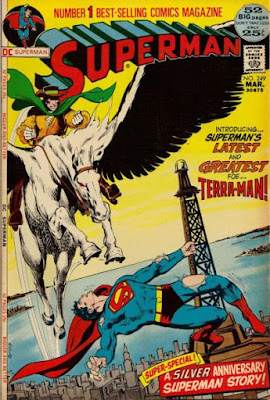 Outlaw cowboy Jess Manning was training his son, Toby, to be just like him, at least until the pair came across an alien being and his spacecraft in "The Origin Of Terra-Man", the second story of Superman #249 (March, 1972) by Cary Bates, Dick Dillin and Neal Adams.

The spaceman killed Toby's father, but the alien took the young cowboy into space, adapting him to be a space cowboy, training him to be a thief, giving him devices that have an old west feel, and even Nova, a flying horse.  Toby settles up with the alien, figuring out a message his dying father left him, that the alien killed Jess.  After killing the alien, Toby, taking on the name, Terra-Man, returned to the modern Earth to take on the planet's top lawman in the modern age, who happened to be Superman.

The two then faced off many times....and more! 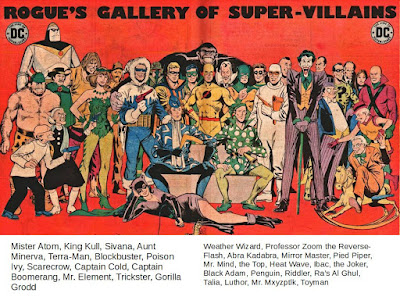 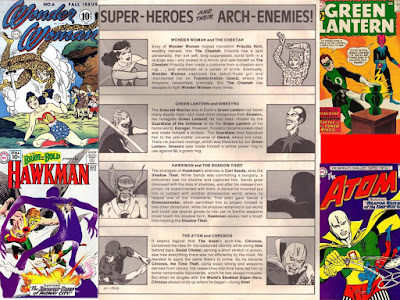 ...and, a text page summarizing the battles between Wonder Woman and Cheetah, Green Lantern and Sinestro, Hawkman and Shadow-Thief, and Atom and Chronos.  Some of these villains combine, in groups like the the Monster Society of Evil, the Injustice Gang of the World, the Flash's Rogue's Gallery, and later in groups like the Secret Society of Super-Villains and the Suicide Squad.

If you love DC's bad guys, this treasury is the one for you!
Posted by Dave's Not Here Comic Blog at 4:11 AM