Meet The Legion Of Super-Heroes 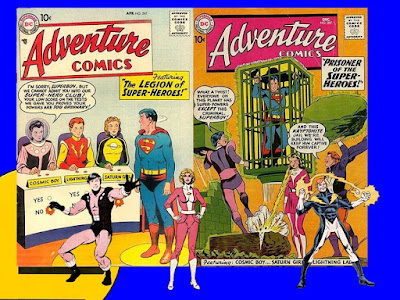 The Legion of Super-Heroes is a group of heroic youngsters from 1,000 years in the future...who first appeared in Adventure Comics #247 (April, 1958) in a story titled "The Legion Of Super-Heroes" by Otto Binder and Al Plastino, under a cover by Curt Swan and Stan Kaye, though the kids' costumes got a little closer to their regular look in their second appearance, in Adventure Comics #267 (December, 1959) with cover by Swan/Kaye, and story by Jerry Siegel and George Papp.

But, who were these three founding members, and what did they want with Superboy as a member? 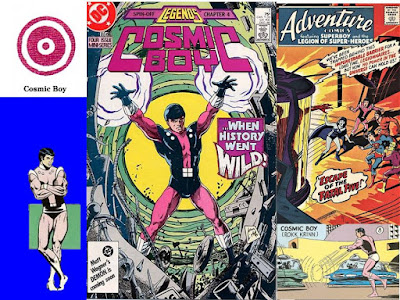 Rokk Krinn of Braal became the first leader of the Legion, perhaps because of his magnetic personality.

Rokk possesses the power of magnetism, native to Braalians, but his ability was stronger due to being born on Earth, with its stronger magnetic fields.

Rokk was on a spaceship headed for Earth, when he met two other teenagers who would change his life forever. 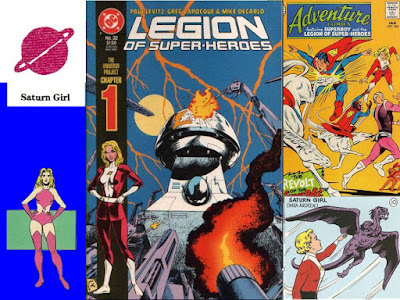 Imra Ardeen of Titan was a bit aloof when she boarded a spaceship headed to Earth, but she had a right to be, as she was a telepath, one of the strongest of the moon of Saturn, planning to come to Earth to use her power for good by joining the Science Police, to stop criminals.


Imra came aboard the ship headed to Earth, where she got an early chance to use her powers to thwart the assassination of industrialist R. J. Brande, as well as drawing the attention of the third charter Legion member. 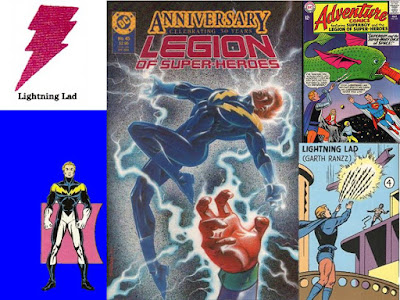 Garth Ranzz of Winath was leaving home, and his twin sister, Ayla, coming to Earth to look for his brother Mekt.  The three youths had had an ill-fated spaceship trip before, landing on Korbal, where they were charged with electricity by the Lightning Beasts, gaining lightning powers themselves.

This act also unhinged the untwinned Mekt (Winath residents were usually born as twins), who left home, with his brother, Garth, heading to Earth to enlist the help of the Science Police to find the missing boy.

Garth got distracted, meeting Rokk along the way, and noticed a beautiful young girl board the flight (Imra) at Titan (while Rokk hoped he could get a job with R. J. Brande).

While disembarking on Earth, two assassins planned to kill R. J. Brande, except they hadn't counted on a telepath picking up their plans, and two boys using their respective powers to stop the assassins. 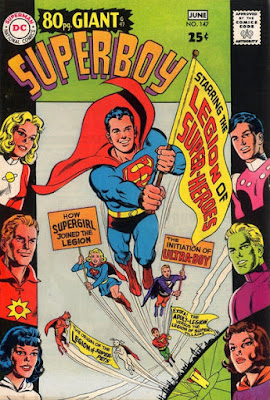 R. J. Brande had the three youths report to his office afterwards, with the financier giving the kids the idea that they could work together to combat crime and injustice, using the 20th Century Superboy and Supergirl as role models, and that he would be willing to fund their enterprise.  The three youths agreed, getting code names, costumes and a headquarters, picked Cosmic Boy to be their leader, drafted a constitution to guide membership enrollment (such as each member having a unique power, and all members having to have a power), then, after a little side adventure wherein they convinced the United Planets to grant the members of the Legion citizenship to all worlds, set about to get more members, starting with Triplicate Girl and Phantom Girl (the Legion origin was finally revealed in Superboy #147 of May-June, 1968 by E. Nelson Bridwell and Pete Costanza, with a little addition to the story happening in DC Super-Stars #17 of November-December, 1977 by Jack C. Harris, Juan Ortiz and Robert R. Smith).

All this (and a little bit more), and it is time to catch up to the story presented in the Legion's first appearance, where they enroll the young Kryptonian from Smallville. 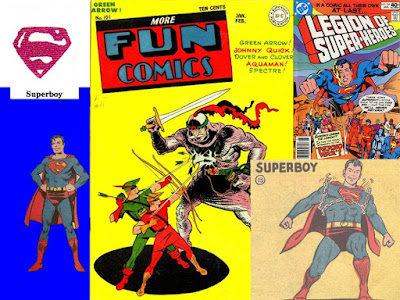 Kal-El of Krypton came to Earth, sent their as his planet exploded by his parents, Jor-El and Lara, with his ship landing on the outskirts of Smallville, where he was found by farmers Jonathan and Martha Kent, who took the boy as their own (naming him Clark Kent), raised him to learn how to use his incredible alien powers, such as flight, strength, speed, invulnerability and vision powers, but also gave him the heart of humanity, inspiring the lad to grow up to fight for truth, justice and the American way, eventually leaving Smallville to go to work for the Daily Planet, a major metropolitan newspaper, and become the hero of the world, Superman.

But, it was his adventures as a boy, that started in More Fun Comics #101 (January-February, 1945) by Jerry Siegel and Joe Shuster, (with a rare time that Green Arrow took the cover over Superboy) that continued on through a few issues of More Fun Comics, before transferring over to Adventure Comics, where Superboy was the main feature, learning how to get along, hiding his identity from the prying eyes of Lana Lang...and, where the charter members of the Legion of Super-Heroes came back to recruit Superboy as their 13th member in Adventure Comics #247. 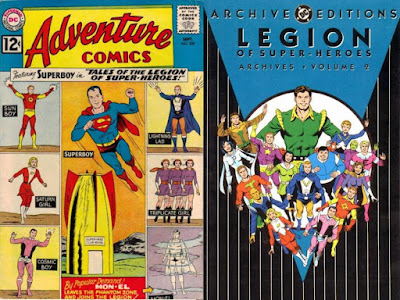 But, after Cosmic Boy, Saturn Girl, Lightning Lad, Triplicate Girl, Phantom Girl, who joined next?  (A little spoiler, it was Chameleon Boy, Invisible Kid, Colossal Boy, Star Boy, Supergirl, Brainiac 5 and Shrinking Violet....).  But, where did these new members come from (some of them were in the shadows back in Adventure Comics #247), and how did Superboy's friend, Mon-El, end up as a member as well?  When time permits, more facts of the Legion will be revealed....
Posted by Dave's Not Here Comic Blog at 3:53 AM