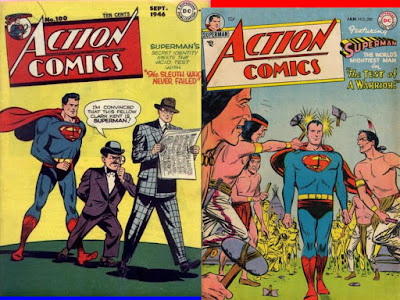 Starting a celebration of every 100 issues of Action Comics, where Superman began back in June, 1938. 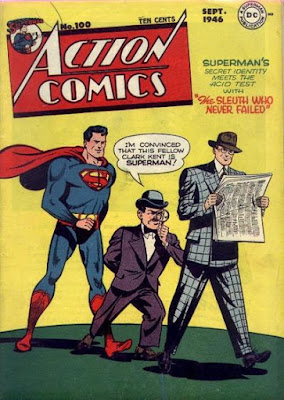 The first of these special issues was Action Comics #100 (September, 1946) with a cover by Wayne Boring and Ed Dobrotka.

This issue features the main story of "The Sleuth Who Never Failed" by Alvin Schwartz and Ira Yarbrough, where Inspector Hawkins from Scotland Yard comes to America to find out Superman's secret identity...following around Clark Kent for a time, but eventually giving up on Kent as Superman's alter ego, after a myriad of super-tricks, and one not so obvious, that of finding Clark's will, where Superman is named as a beneficiary!

This issue is unique as this is the only one that features the original, Golden Age Earth-2 Superman as the star, and also has many other features, such as the Hayfoot Henry, Congo Bill (who later got a magic ring and merged with Congorilla), the Vigilante (the Seven Soldiers of Victory member) and Zatara (Zatanna's father). 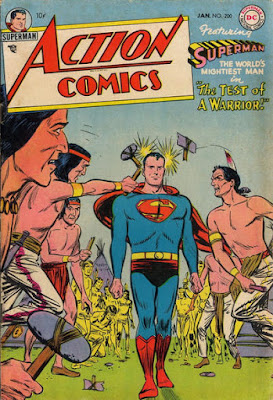 J. Winslow Mortimer provided the cover for the next centennial issue of Action Comics, which was #200 (January,1955).

Here, Superman faced the "Tests Of A Warrior" by no credited writer, and artists Wayne Boring and Stan Kaye.  Superman helps the son of Indian Chief Hun-Sha, who is being forced to pass tribal tests by the evil medicine man, Morwatha, until Superman can expose his treachery.

This is a story of the Silver Age Superman of Earth-1, and with shrinking page counts, only has two other adventures, that of future Space Planeteer, Tommy Tomorrow, and jungle explorer, Congo Bill (who 48 issues later becomes Congorilla).

Come back as the countdown to Action Comics #1000 continues...
Posted by Dave's Not Here Comic Blog at 4:00 AM