In Action With King Krypton 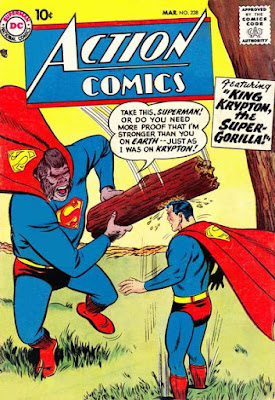 Gorillas seem to always make a monkey out of Superman.  That was true in Action Comics #238 (March, 1958) when Superman met King Krypton, "The Super-Gorilla From Krypton" by Otto Binder, Wayne Boring and Stan Kaye, with a cover by Curt Swan and Stan Kaye (who take liberties on the cover....King Krypton never wears the Superman costume).

Cub reporter Jimmy Olsen was on a safari in Africa, when his party was attacked by a gorilla....so, Jimmy used his signal watch to summon Superman, who caged the gorilla.

But, the gorilla breaks the bars, and flies away! 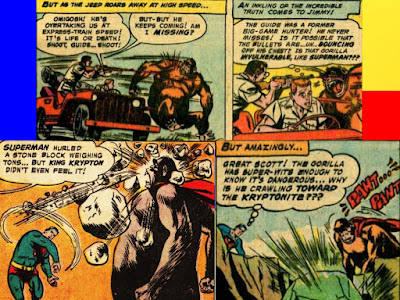 Superman finds a test rocket from Krypton, figuring that animal must be from his home world.  Jimmy names him King Krypton, the Gorilla of Steel, with Superman going to pursue him.  Superman stops King Krypton from attacking an airplane, then tries to wrap him in his cape, which the gorilla likes and takes.

Meanwhile, Jimmy searches for Kryptonite to stop the beast and finds a tribe of ancient Romans, who have devolved into near barbarism...but, they have Kryptonite spearheads.  Superman comes to try to save Jimmy, but is also taken captive, as is King Krypton, who follows the Man of Steel.  The Romans bid Superman and King Krypton to fight, but Superman is too weakened by Kryptonite.  King Krypton comes to save him, turning into a man as he dies being exposed to the Kryptonite.  He was a scientist on Krypton trying to evolve himself forward, but instead turned himself into a gorilla, and his assistant launched him into space.  He dies, finally being a man again. 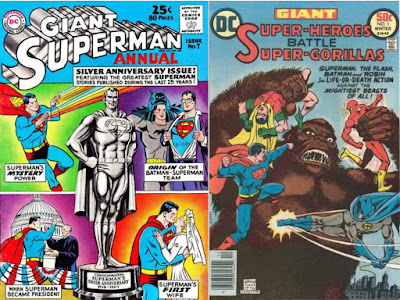 This story has been reprinted twice over the years, once in Superman Annual #7 (Summer, 1963) as part of a 25th Anniversary celebration...

....then again in Winter, 1976, as part of a collection of super gorilla stories, entitled Super-Heroes Battle Super-Gorillas, along with stories of Flash and Batman.
Posted by Dave's Not Here Comic Blog at 4:11 AM