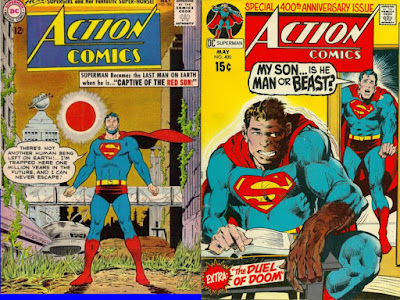 This time around, continuing our celebration of Action Comics and its many hundreds of issues...

...with a look back at Action Comics #300 and #400, with adventures of the classic Silver Age Superman! 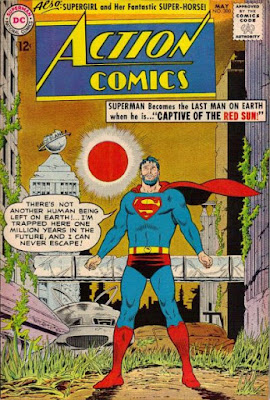 The anniversary issue, Action Comics #300 (May, 1963), with a cover by Curt Swan and George Klein, was indeed a special one, as by this time, Action Comics was dominated by Superman and his family.

Superman was featured in the main story, "Superman Under The Red Sun" by Edmond Hamilton and Al Plastino, wherein the Man of Steel ends up in the far future thanks to the machinations of the Superman Revenge Squad, where Superman is the last man on Earth (and does not possess his powers, as Earth's sun has turned red).  This story details Superman's fight to survive and get to his Fortress of Solitude, wherein he is able to use a rocket there and some Red Kryptonite to get home.

There is also back up story, featuring Supergirl and one of the earliest appearances of Comet the Super-Horse! 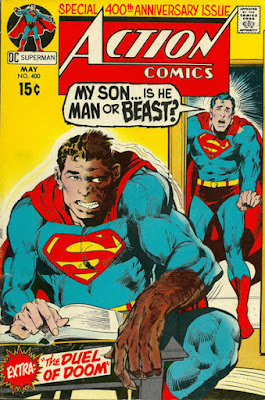 The main story of the issue, "My Son...Is He Man Or Beast?" is by Leo Dorfman, Curt Swan and Murphy Anderson, where Superman becomes the guardian to Gregor Nagy, the son of a scientist who dies.  Gregor becomes the Changling, randomly changing into animals, until Superman helps him learn to control his power, and teaches the boy the morality to be a hero, as Gregor sacrifices his life to save others.

This issue also features a tale of the bottle city of Kandor, where Superman and Supergirl tell of two Kandorian students who learn the value of working together.

Check back as we continue going up the numbers of Action Comics until it reaches 1000 in April!