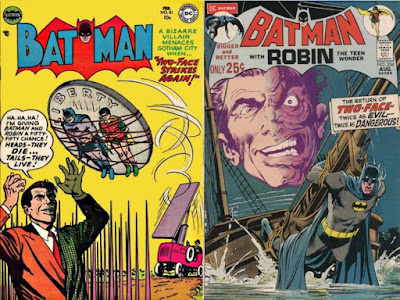 What better way to celebrate today, than with two stories of Two-Face? 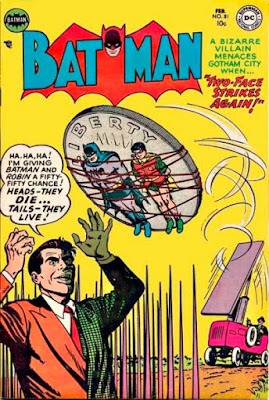 Even with that title, Batman #81 (February, 1954) by David V. Reed, Dick Sprang and Charles Paris (under a cover by Win Mortimer), was the first appearance of the Earth-1/Silver Age Two-Face (as, on Earth-2/Golden Age, not only was Two-Face originally District Attorney Harvey KENT, but, had been cured after a trilogy of tales with plastic surgery, never to return to his split alter ego).

Here, Harvey was trying to put his criminal past behind him, but a chance robbery, with Dent going in to stop the criminals exposed him to a small explosion, undoing the surgery, condemning him to a life as Two-Face (which he permanently decided with a flip of his coin, which landed scarred side up).

After gathering a gang, Two-Face went after others with two faces (clowns, actors) keep ahead of Batman and Robin, until Batman offered up his own identity as Bruce Wayne (receiving an award for aiding a native American charity) to lure Two-Face out, getting Batman and Robin a chance to capture him, but getting caught in Two-Face's coin trap....which they defeated, then captured the criminal. 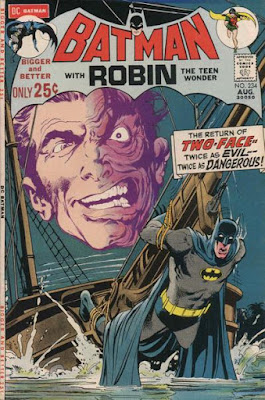 It appears returning Harvey Dent to a life of crime didn't sit well, as he didn't return to menace the caped crusader until Batman #234 (August, 1971) in a tale by Denny O'Neil, Neal Adams and Dick Giordano.

This time around, it was only Batman available to face Two-Face, who used a pair of clowns to steal a parade balloon and a book from a nautical museum.  After recounting Two-Face's origin to Alfred (how Harvey was half-scarred in court by a criminal throwing acid, cured and then redamaged in an explosion), Batman went after Two-Face and his real target, a boat at a marina, which Two-Face sinks!  Batman figured out Two-Face's real plan...to use the parade float to raise the boat later, to plunder it at his leisure.  But, by showing up, Batman forces Two-Face to speed his timetable, tying Batman to the boat and deflating the giant balloon.

Batman convinces Harvey to flip his coin to decide if he should save Batman, and the coin comes up good, so Two-Face heads back to the sinking boat (which Batman  has already escaped, capturing Two-Face on his return). 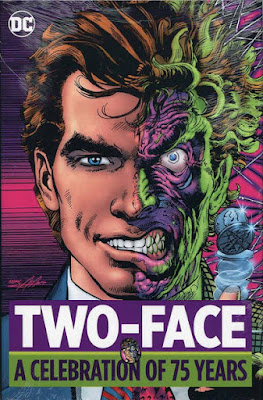 These two tales set the stage for later interpretations of Two-Face, though for a while, mostly as a second-stringer with a fetish for coins and the number 2, later, after the Crisis On Infinite Earths, and Frank Miller's Batman: Year One, Harvey Dent was added as a friend of Bruce Wayne, James Gordon and Batman, and additional origin details elsewhere by writers such as Jeph Loeb, Marv Wolfman, Chuck Dixon and others, took Two-Face out of the realm of second stringer, and into being a tragic look at the other side of Batman's coin, a good man who could do evil when counting on chance, and not drive and determination.

These two stories above, as well as his original three, along with others, are reprinted in Two-Face: A Celebration of 75 Years, which came out in 2017.

Posted by Dave's Not Here Comic Blog at 2:22 AM