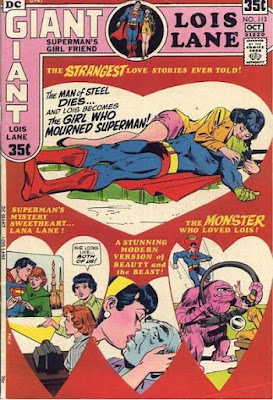 True, it was still the title of Superman's Girl Friend, but even though Superman and Lois Lane loved each other, it was shown on a few occasions that Lois might love someone else, or that Superman might have someone else in his life...


Still, it brought back quite a few tales of love... 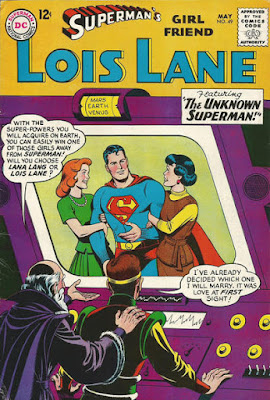 First up was "The Unknown Superman" from Superman's Girl Friend, Lois Lane #49 (May, 1964) by an unknown writer and artist Kurt Schaffenberger.

Lois tests out a device by a Dr. Drolc, which allows her to trace talents, which she proves works.  So, she finds Strong Bear, an Indian man with super powers, and the two fall in love, then plan to marry.  Looking at the ring his tribe gives her, she realizes that Strong Bear really was Dr. Drolc, and others whom she had found during her testing.  Lois breaks the ring, and Strong Bear becomes a small blue alien man, the last survivor of the nuclear war which devastated his planet, who had been using the ring to take human form, allowing him to survive on Earth.  He did love Lois, but, without the ring, he was unable to survive on Earth and dies.... 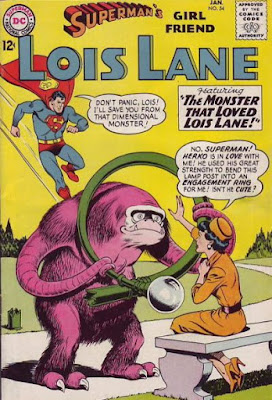 Superman's Girl Friend, Lois Lane #54 (January, 1965) is the next tale up, with "The Monster Who Loved Lois Lane" by Edmond Hamilton and Kurt Schaffenberger.

This time around, it was the inter-dimensional alien of Herko that falls for Lois, having been brought to Lois' dimension by Dr. Elder, and the super-strong and invulnerable alien immediately falls in love with Lois.  Lois leads Herko away from populated areas, giving Dr. Elder time to repair his machine.  Herko even proves a match for Superman for a bit, and, after the doctor finishes his repairs, Lois leads the love struck alien back to a portal to his own dimension, where he is heartbroken, having to live there without Lois Lane. 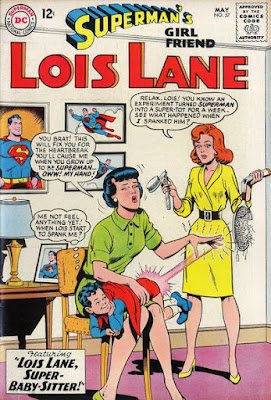 Next up is "The Return Of Lois' Monster Sweetheart" from Superman's Girl Friend, Lois Lane #57 (May, 1965, by Edmond Hamilton and Kurt Schaffenberger, though that feature didn't make the cover...).

Feeling a little guilty about what she did to Herko, Lois goes to check up on him with help from Jimmy Olsen, but the two accidentally get trapped in Herko's dimension.  While there, Herko tries to renew his relationship with Lois, but Lois finds Zagga (a female member of Herko's race, who happens to love Herko).  Lois convinces Jimmy to try to woo Zagga, hoping to make Herko jealous and pursue Zagga, but this plan backfires, nearly resulting in a double wedding of Earthers and aliens.  Thankfully, Lois' makeup makes Herko sick, and he falls for Zagga as she helps him recover, while Dr. Elder fixes his machine to bring Lois and Jimmy home. 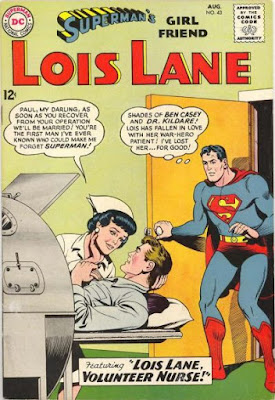 With Superman's Girl Friend, Lois Lane #43 (August, 1963), Lois became "The Girl Who Mourned For Superman", in a story by Leo Dorfman and Kurt Schaffenberger (with another story not featured on the original cover of the issue).

This time around, an electrical experiment with the Jimmy Olsen Fan Club transports Lois to an alternate Earth (but this one was so similar, she wasn't aware she was on an alternate planet).   Here, Lex Luthor traps her, and is able to kill Superman (but dies in the process).  Lois lives there long enough to see a robot replace Superman, then a Kandorian....before she meets an ambassador from Atlantis (which had not sunk in this world).  Lois visits her doppleganger without revealing herself, and ends up back home after getting another unintentional electric shock. 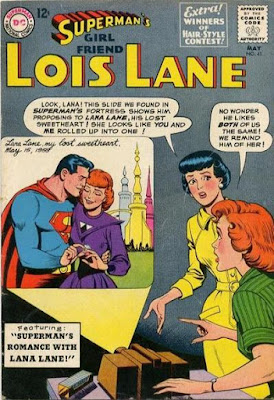 The last Lois Lane story of this giant was from Superman's Girl Friend, Lois Lane #41 (May, 1963), with "Superman's Romance With Lana Lane" by Jerry Siegel, Curt Swan and George Klein.

Wait a minute...Lana Lane?  Yes, a few years before this story, Lana and Lois were merged into one girl by an alien pendant, and Superman, realizing he is getting the best of both worlds, proposes to the merged woman (believing this change would be permanent).  Unfortunately, it was not, and Superman realized they would both die.  Superman came up with a way to save one with a magic statue, but thankfully radiation from a strange meteor safely separated the two, and Superman, confronted by the pair, refuses to admit which of them he would have saved. 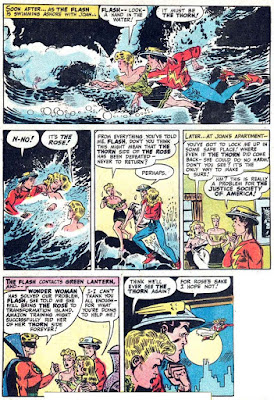 There is part of one more story in this issue, an unpublished Flash Comics Rose And Thorn Story from the tail end of the Golden Age by Robert Kanigher and Joe Kubert.

At least, it is two pages of this story, with the Golden Age Flash, Jay Garrick, saving Joan Williams from the evil Thorn, who turns back to her good side of Rose, with Flash giving Rose to Green Lantern to take to Wonder Woman's island, to make sure she is reformed.

More on this Rose and Thorn, and her more modern version who was a heroic back-up in Lois Lane, is available here, and, if you loved this, more Giant Lois Lane fun can be found here, with the eventual results of that union of Green Lantern and Thorn pop up here, as Roy Thomas used this untold tale during his run on Infinity, Inc.