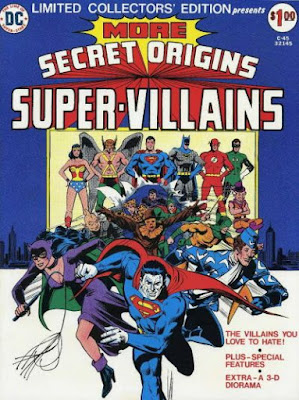 Coming back with a little more Secret Origins for DC's super-villains.

Here's even more from Limited Collectors' Edition C-45 of June-July, 1976, under another wonderfully evil cover by Dick Giordano.


This time around, its the foes of Batman, Flash, Superboy/Superman and Wonder Woman that get covered....specifically Catwoman, Mirror Master, Mr. Mxyzptlk and the Cheetah! 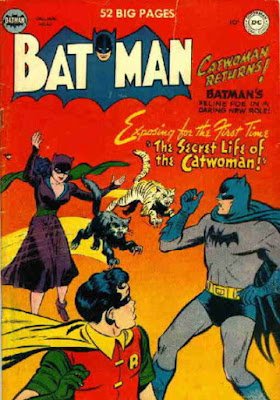 Readers get to see "The Secret Life Of The Catwoman" from Batman #62 (December-January, 1950/1951) by Bill Finger, Bob Kane, Lew Schwartz and Charles Paris.

Catwoman is broken out of jail by the mysterious Mr. X to help in his planned crime spree.  Along the way, Catwoman encounters Batman, but saves him from a collapsing wall, with her receiving a knock on the head.  Catwoman claims the 1950 calendar is ahead of time...and wonders why she is in costume, after all she is just stewardess Selina Kyle.  Batman deduces she had amnesia, and works with her as she recalls a planned meeting with Mr. X.  Catwoman works with the dynamic duo to capture Mr. X, and after doing so, Catwoman vows to retire from the costumed life.

Thankfully she did not.... 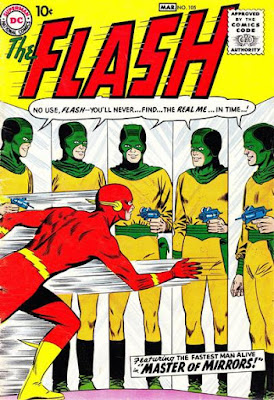 Reflecting on his past, its time for the origin of the Mirror Master from Flash #105 (February-March, 1959) by John Broome, Carmine Infantino and Joe Giella with "The Master Of Mirrors!".

Ex-con Sam Scudder goes into a bank, to capture an image of one of the tellers.  Appears while serving time, Scudder made a mistake making a mirror, learning how to keep a reflection in one.  He continued experimenting with mirrors, making images that he could command, making himself a Mirror Master.  Scudder used this ability to rob banks in Central City, coming into conflict with the Flash, who followed one of his images home, and, after a battle with some of Mirror Master's illusions, the Flash took Mirror Master to jail (so Barry Allen could make his lunch date with Iris West).


Mirror Master would return again and again to face the Flash. 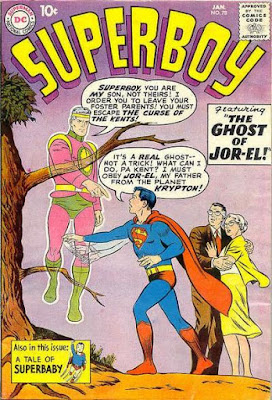 Next up, a foe of Superman's, the 5th Dimensional imp, Mr. Mxyzptlk, but a tale from his (and the Man of Steel's) boyhood, with a young Mxyzptlk facing Superboy for the first time in Superboy #78 (January, 1960) in "The Ghost of Jor-El!" by Jerry Siegel and George Papp.

Mxyzptlk started as a mischievous little boy that vexed his 5th Dimensional parents of Fuzastl and Tlndsa, so, he ran away to Earth-1, encountering Superboy in Smallville, thinking it would be fun to turn the town against the Boy of Steel.  The boy prankster even enrolls in Smallville High, meeting Clark Kent, and accidentally revealing to Clark his color blindness.  After a few attempts to sabotage Superboy (which Clark turns to his advantage), Superboy finally uses what he has learned to get the imp to say his name backwards and go home.

Mr. Mxyzptlk never forgave Superboy for this, and would return again and again to torment the Man of Steel. 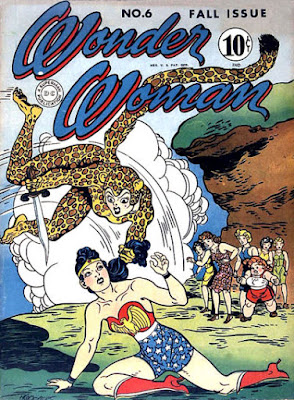 Last, but not least of the featured origins, was the first battle of "Wonder Woman And The Cheetah" from Wonder Woman #6 (Fall, 1943) by William Moulton Marston and H. G. Peter.

Debutante Priscilla Rich is outshone by Wonder Woman a few times, and decides to plot revenge against the amazing amazon.  Priscilla manifests an alter ego, the Cheetah, and garbs herself to look like one. stealing charity money with the intent to frame Wonder Woman for its theft.  Cheetah fails in this, ending up trying to kill Wonder Woman in quicksand, then a fire, with Wonder Woman nearly figuring out her identity as it appears the flames take the Cheetah.

But, the Cheetah would return. 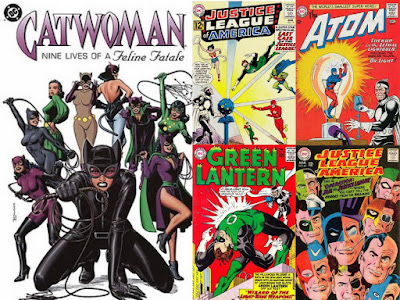 Added features in the treasury include a feature on 18 super villains (including Captain Boomerang, Vandal Savage, Scarecrow, Matter Master, the Shark, Bizarro No. 1, Penguin, Solomon Grundy, Giganta, Grodd, Brainiac, Two-Face, Felix Faust, Queen Bee, the Top, Pied Piper, Sonar and Kanjar Ro), another feature on the many costumes of the Catwoman, and, on the last page, "Every Hero's Enemy"...that of Dr. Light, making this and the other DC villains' treasury an indispensable guide for every villain fan of from the 1970s!
Posted by Dave's Not Here Comic Blog at 4:13 AM