Inside Batman And The Outsiders 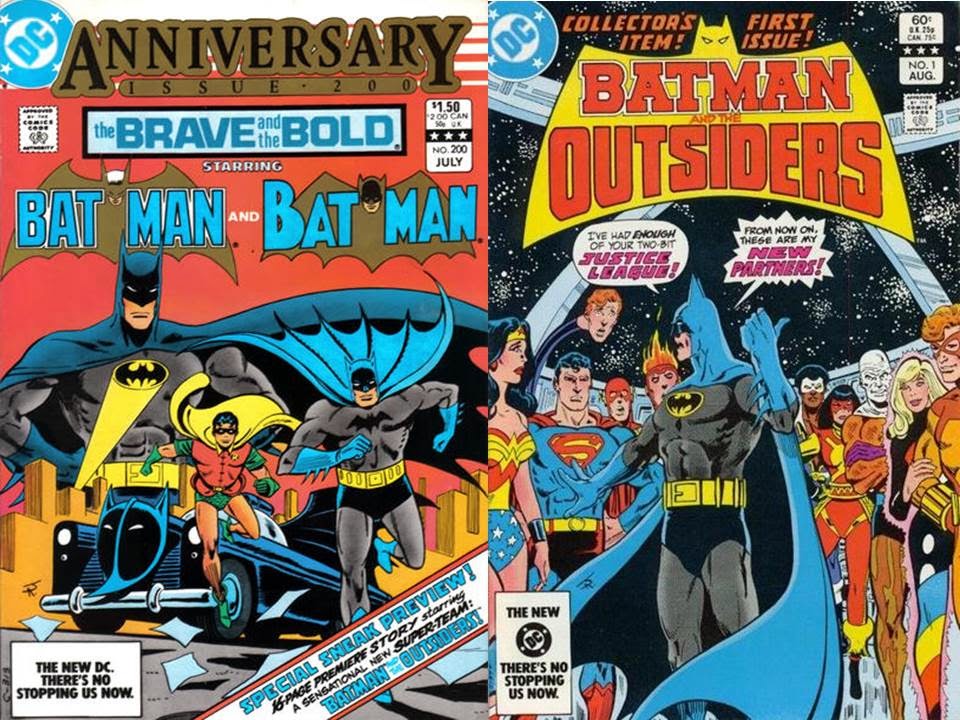 It's odd to think of a loner like Batman as a member of a team...but he was.

Batman helped found the Justice League of America (and worked with many, many heroes over the years in the Brave and the Bold), but there came a day when the JLA just wouldn't help, and Batman needed his own team....
...the Outsiders! 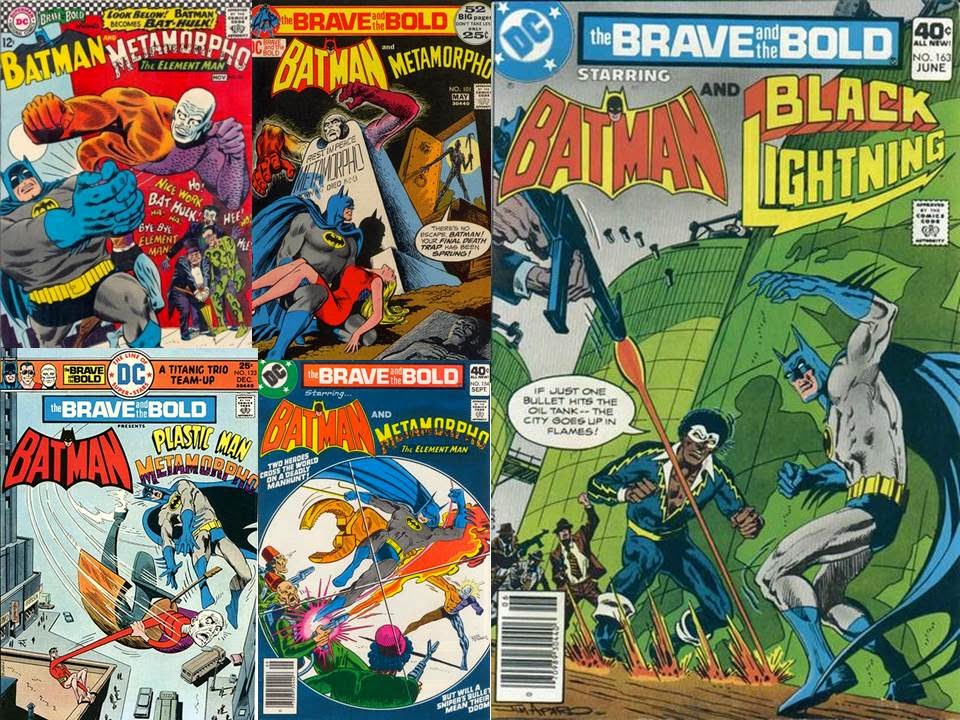 That was part of the problem.  When the financial adviser to Wayne Enterprises, Lucius Fox, was taken hostage in Markovia, the JLA wouldn't help Batman free him.  So, Batman felt the need to leave the group, and headed there to free his friend in Batman and the Outsiders #1 (August, 1983). 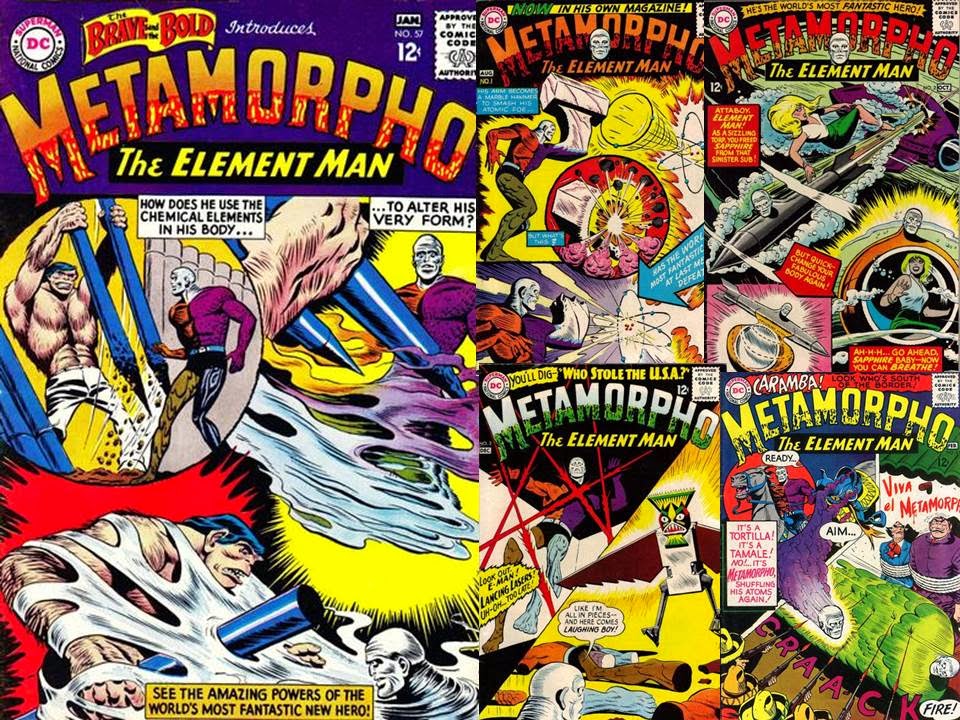 Rex Mason was just a guy who was lucky.  He had Sapphire Stagg (a weathly girlfriend), though her father, Simon Stagg of Stagg Industries, didn't approve of their relationship.  So, Simon sent Rex to Egypt to find the Orb of Ra, giving his caveman manservant, Java, instructions to finish Rex off.  Rex was left for dead in a pyramid, but instead, changed into the master of his elements, Metamorpho (all of which happened in Brave and the Bold #57, December-January, 1964/1965 by Bob Haney and Ramona Fradon). 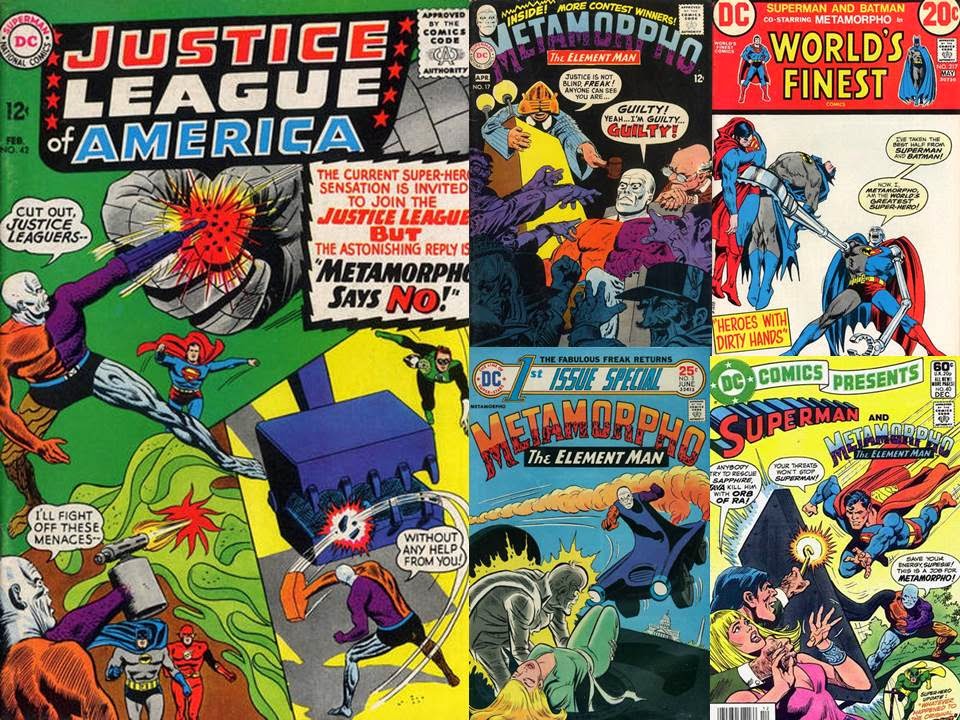 We've talked about the early appearances of Metamorpho in Brave and the Bold, and then Rex went on to his own series, that lasted 17 issues from July-August, 1965 to March-April, 1968 (where Rex faced menaces like Kurt Vornak, Edifice K. Bulwark, Achille Le Heele, Doc Dread, El Matanzas, Stingaree, Franz Zorb, the Thunderer, Jezeba and Mr. Shadow, and working with Urania Blackwell the Element Girl), with Rex making a notable appearance in Justice League of America #42 (February, 1966, by Gardner Fox and Mike Sekowsky), wherein "Metamorpho Says - No!" to the JLA!  Metamorpho wasn't interested in being a hero, he was looking for a cure to his condition (even though it helped him be a hero), and ended up in Markovia at a time of unrest looking for Dr. Helga Jace... 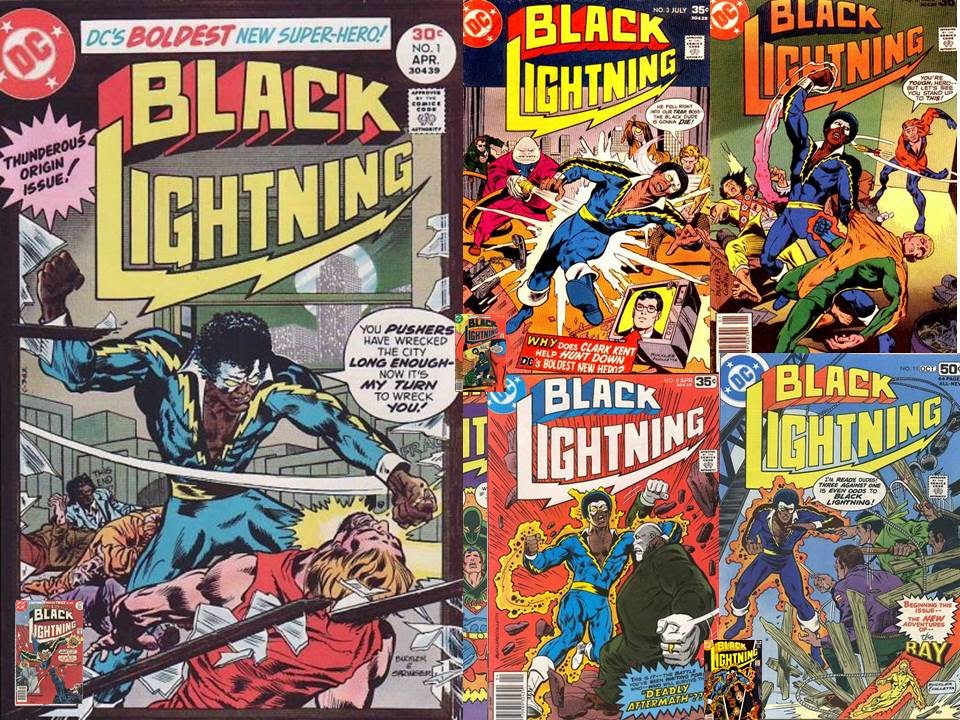 Jefferson Pierce was an Olympic athlete who had escaped crime of the inner city, but came back to Metropolis to be a teacher (and ended up fighting against that street level crime headed by the crime cartel 100, who faced the Thorn) starting with Black Lightning #1 (April, 1977, by Tony Isabella and Trevor Von Eeden). 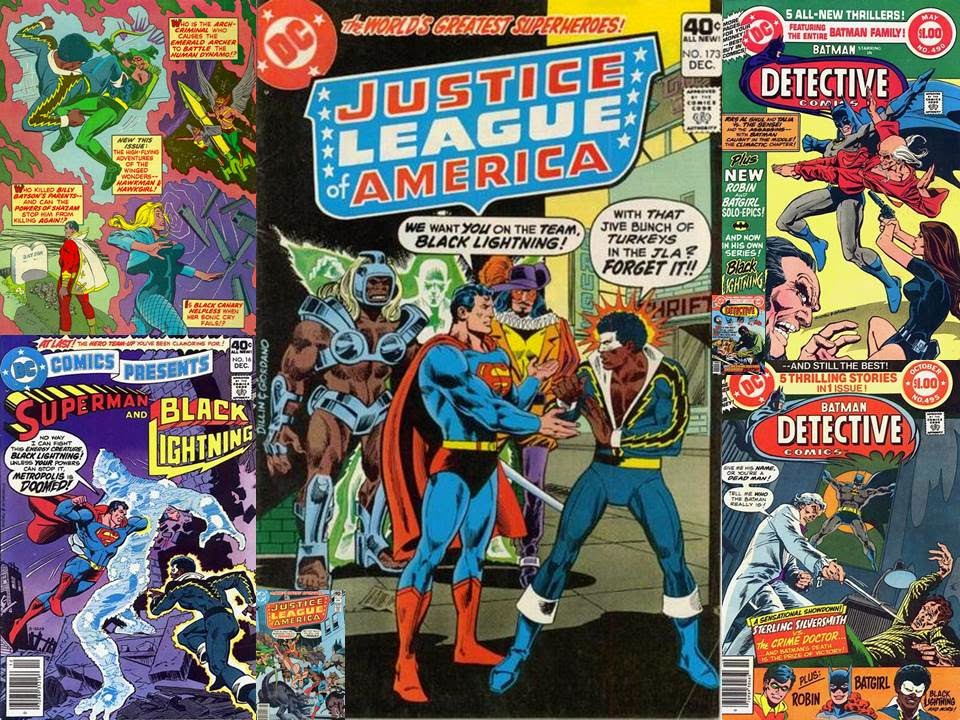 Black Lightning's series lasted 11 issues, and along faced many foes, like Merlyn the Dark Archer, Talia Al Ghul, the Cyclotronic Man (a renamed, old foe of Batman's), Synoide, the Annihilist, Flash foe the Trickster, but mostly Tobias Whale, the local leader of the 100.  Black Lightning also worked with Green Arrow (proving they were both street level heroes, and inspiring Green Arrow to leave the JLA for a while), Superman and Batman, and even told the JLA no as well in Justice League of America #173-174 (December, 1979 and January, 1980, by Gerry Conway and Dick Dillin), before heading home, and losing his powers in Detective Comics #490-495 in 1980, and then being recruited by Batman to help free Lucius Fox in Markovia.

Black Lighting and Metamorpho were the two previous introduced heroes, but there were more in Markovia, and they were all introduced in the back-up story in Brave and the Bold #200 (July, 1983 by Mike W. Barr and Jim Aparo), though that story featured an already formed Outsiders team operating in Gotham (with a story taking place between Batman and the Outsiders #3 and #4). 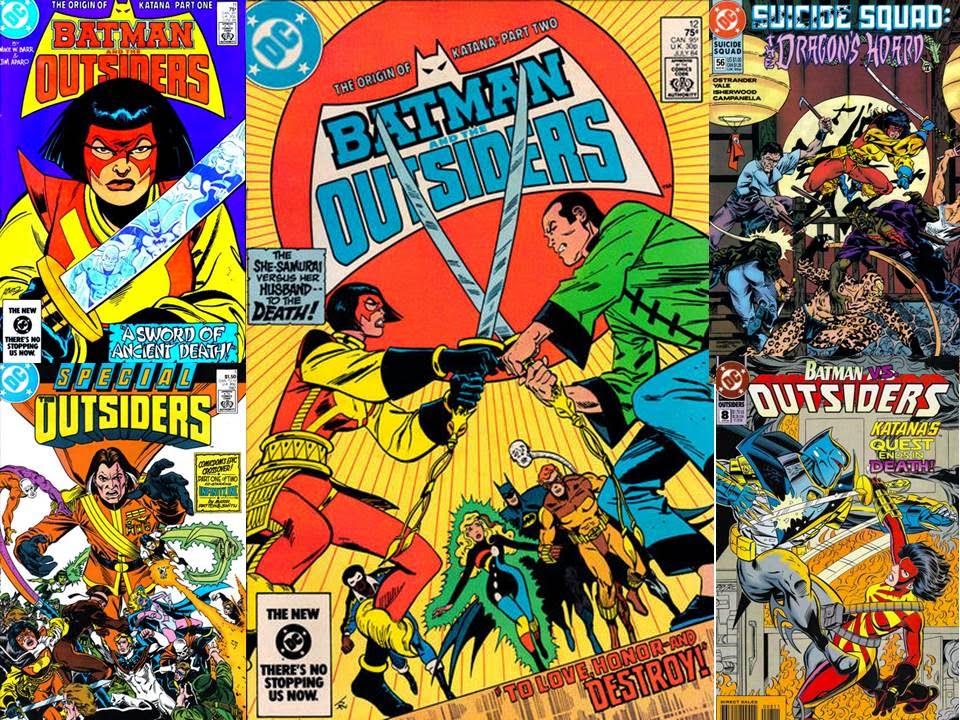 Tatsu Yamashiro was just an ordinary housewife (trained in the Japanese martial arts), at least until her husband, Maseo, and kids, Yuki and Reiko, were killed by Takeo Yamashiro (Maseo's brother, also in love with Tatsu, disowned by the Yamashiros for his Yakuza membership, and wanting her and the Soultaker sword).  Tatsu escaped with the sword (which had Maseo's soul in it, having been killed with it by Takeo), then learned more training under samurai master Tadashi, and started to track down those that had killed her family, ending up in Markovia, where she killed General Franz (who had given the Soultaker to Takeo originally) who was working for Baron Bedlam, and meeting Black Lightning. 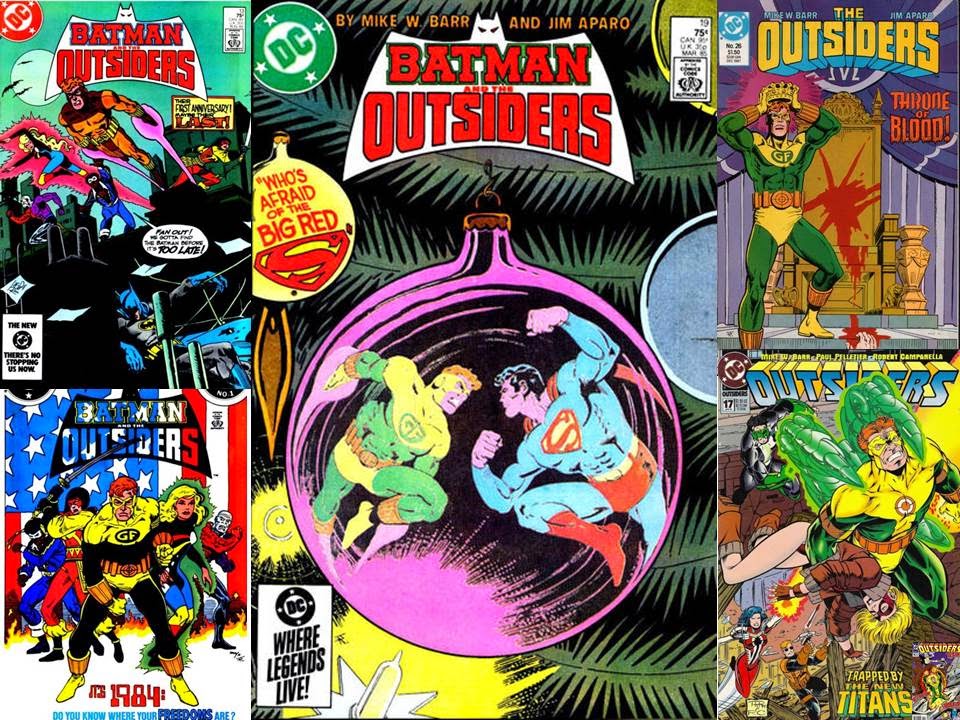 Brion Markov was a Prince of Markovia, and trying to stop the revolt in his country started by Baron Bedlam, having Dr. Helga Jace give him Earth-based powers, but it ended up with Brion being buried (yet his powers were strong enough to revive him).  Having strength, invulnerability, flight and gravity manipulating powers, Brion did join with the heroes in saving Markovia from Baron Bedlam, but Brion's brother, Gregor, took the throne, so Brion headed to the United States with the other members of the Outsiders (and, while there, met his younger half-sister, Tara Markov, who was working with the Teen Titans at the time under the identity of Terra, with Earth-moving powers of her own...and a secret as well).  Geo-Force often butted heads with Batman, as Brion felt he was a more natural leader as royalty.... 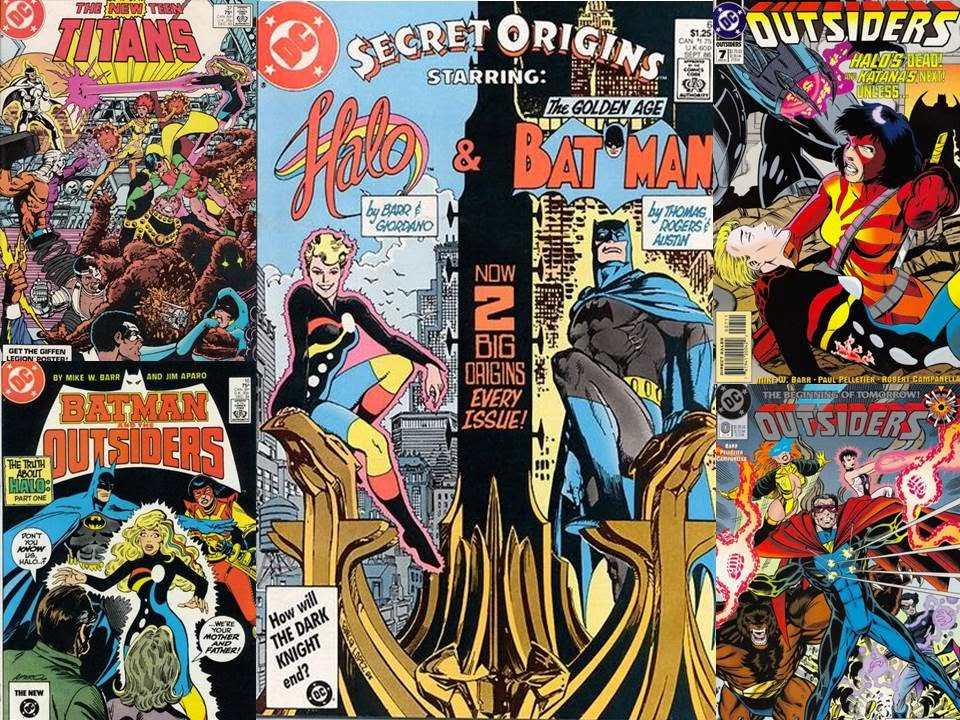 Halo was originally an Aurakle (beings of sentient energy who had been inhabiting the universe since near the dawn of creation), who inhabited the dying body of criminal Violet Harper, but she came to take on her own identity as Gabrielle Doe.

As Halo, she could generate aura of different colors, and while she could fly with each, each color also had another power, like red was heat blasts, orange was force blasts, yellow was bright light, green was a stasis beam, blue was a distortion effect, indigo was a tractor beam, and violet...was unknown to Gaby (but allowed the violent Violet Harper control).  Halo was taken in by Katana, who saw her as a surrogate daughter). 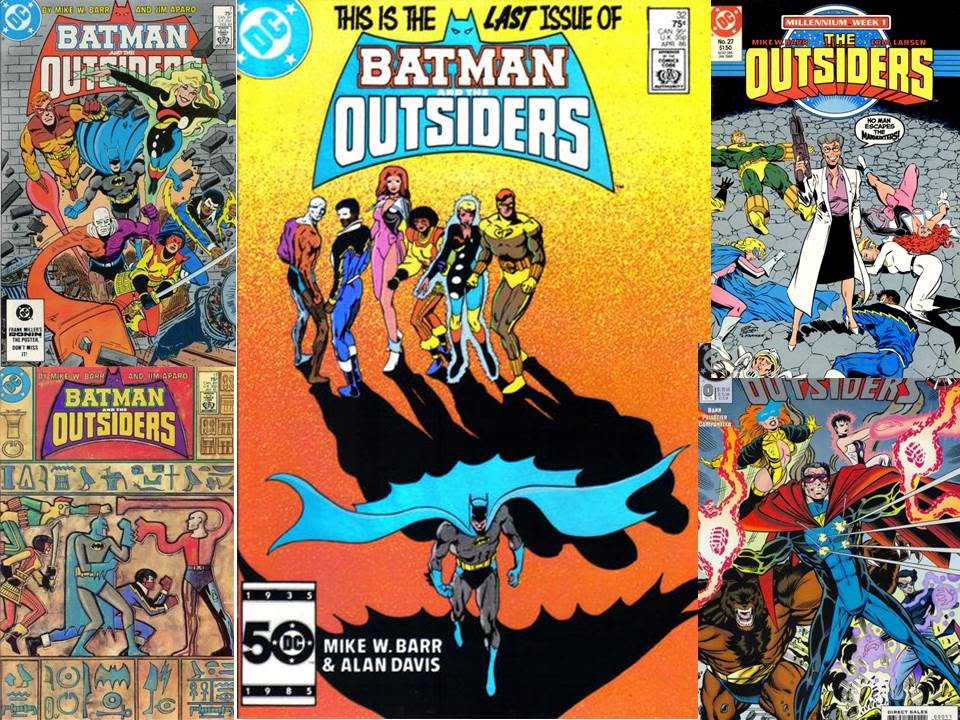 The original Batman and the Outsiders lasted for 32 issues and two annuals, until Batman and the Outsiders #32 (April, 1986), wherein Batman left the team (though the title continued on as Adventures of the Outsiders for a bit).  The team had already picked up a new member, Looker, and had moved into their own Outsiders title (which lasted 28 issues from November, 1985 to February, 1988, and even had an Annual and a Special, that crossed over with Infinity, Inc. and added more members like Windfall and the Atomic Knight).  Another run of Outsiders happened from November, 1993 to November, 1995, lasting 26 issues...and was the last to feature Katana, Halo and Geo-Force exclusively....and added even more members like Faust, Technocrat, Wylde and the Eradicator, but all that is a tale for another day!