We Are The Marvel Champions Part 2 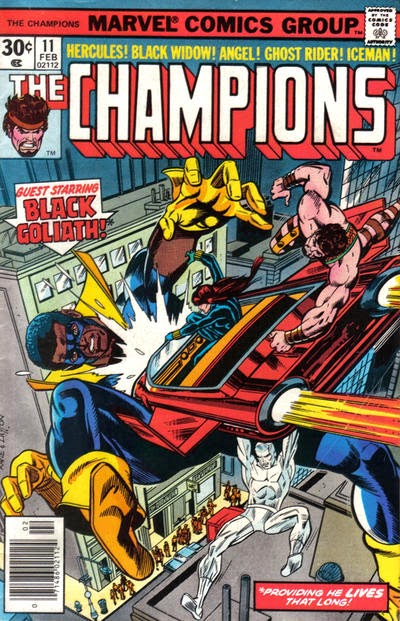 Picking up where we left off, more on Marvel's Champions!

First and foremost, it had the team meeting Black Goliath (a West Coast super-hero with growth powers and ties to Hank Pym/Ant-Man and the Avengers).  It also guest-starred ex-Avenger archer, Hawkeye, and his time-misplaced cowboy buddy, the Two-Gun Kid, and the team faced off against the shadowy threat of Warlord Kaa (as well as getting use to having Darkstar around).

The team also was to deal with the Stilt-Man, and a threat from Black Goliath's recently cancelled title, and artist John Byrne came aboard as Champions artist at this time (through issue #15), joining Bill Mantlo's wild scripts (which were a part of the rest of the Champions' run!). 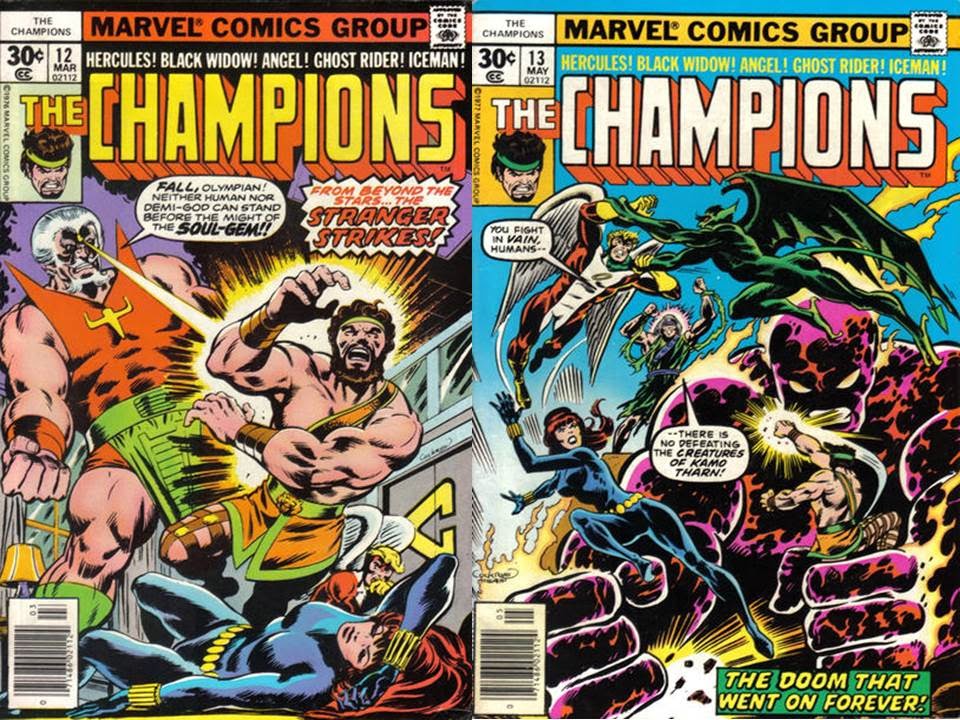 Things did get wilder, as Hercules, Black Widow, Ghost Rider, Iceman, Angel and Darkstar faced the Stranger (a cosmic powered villain who had previously faced the X-Men and the Silver Surfer) in Champions #12 (March, 1977), and dealt with the item that Stilt-Man stole....and might end the Earth, all while half the team ended up in the other dimensional realm of Kamo Tharnn (the Possessor....an old foe of Hercules and Thor).  The team was able to stop all the problems and come back together in Champions #13 (May, 1977)...but there were problems developing on the team (having a headquarters and other equipment that didn't work, as well as the differing personalities of the team causing problems...and the team let Ghost Rider take a little time in his own title in Ghost Rider #23, and Black Widow helped Spider-Man fight the Silver Samurai in Marvel Team-Up #57). 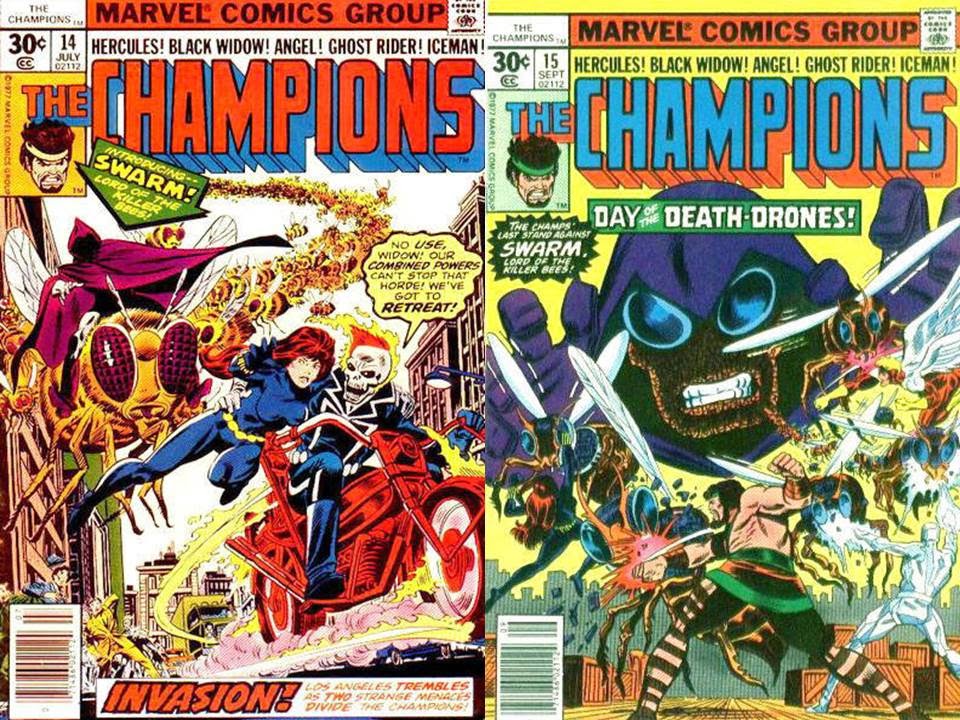 The team came back together in Champions #14 and #15 (July and September, 1977), where they fought Swarm, lord of the killer bees!  (This wasn't John Belushi on a cross-continental bender, but instead a man (Fritz Von Meyer) who had been mutated into a form where he was held together by bees!).  The Champions managed to pull apart this threat as they were falling apart.... 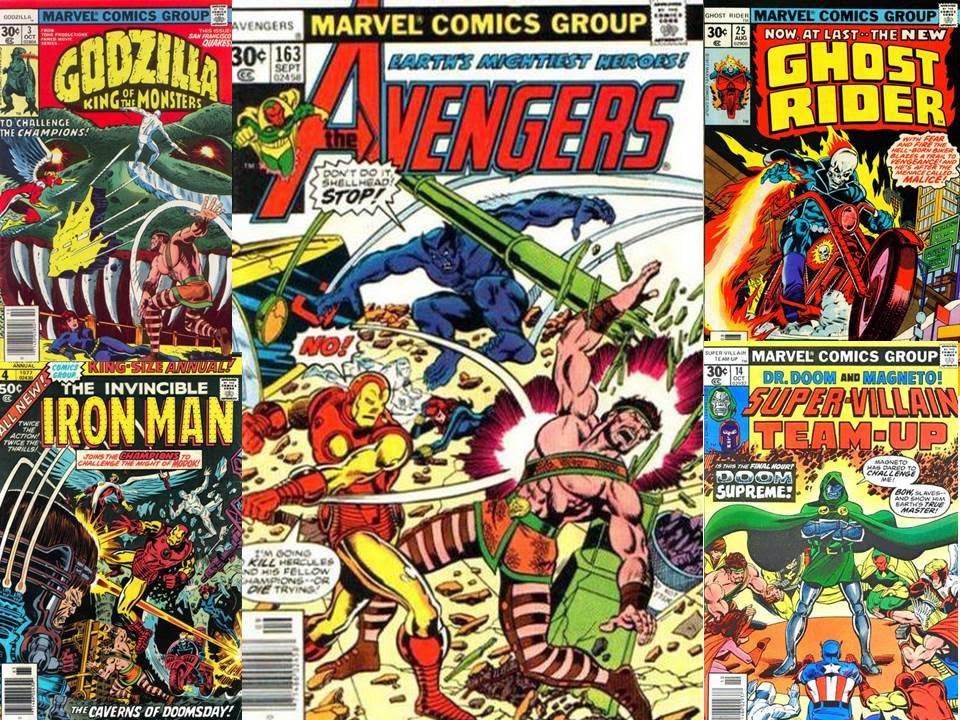 The team tried to get away from trouble (and each other), but only ended up facing Godzilla (at least Hercules, Black Widow, Angel and Iceman did) in Godzilla #3 (October, 1977 by Doug Moench and Herb Trimpe); the whole original team gathering to help Iron Man fight MODOK and A.I.M. in Iron Man Annual #4 (August, 1977, by Bill Mantlo and George Tuska); Hercules working with Black Widow and Iceman and Avengers Iron Man and the Beast to fight Typhon (an old foe of Hercules) in Avengers #163 (September, 1977, by Jim Shooter and George Tuska), and the team being the destination of Magneto and the Beast in a world taken over by Dr. Doom in Super-Villain Team-Up #14 (October, 1977 by Bill Mantlo and Bob Hall), which led directly into... 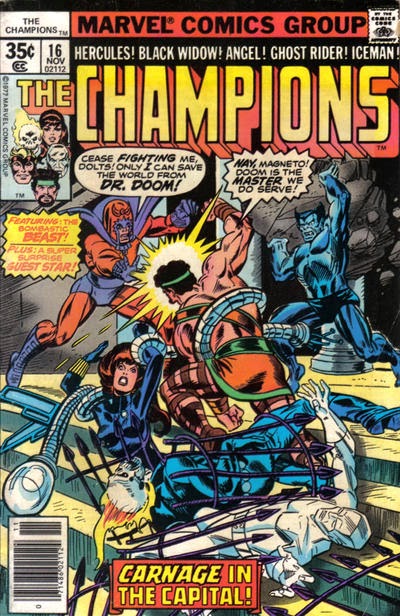 ...Champions #16 (November, 1977 by Bill Mantlo and Bob Hall).  In this issue, the team was a pawn of Dr. Doom and his mind-controlling gas as well, except for the non-breathing, very demonic Ghost Rider, proving the Beast knew what he was doing when he led the team out west!

The rest of the team was controlled and did fight against Magneto, the Beast and even the Hulk, but eventually Dr. Doom was beaten (but not without more fracturing of the team dynamic....which already was falling apart).

The team showed how fractured it was here... 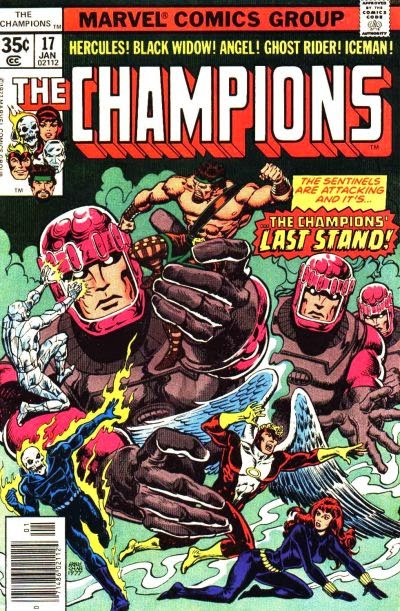 Champions #17 (January, 1978, by Bill Mantlo, with art by George Tuska and John Byrne) had the Champions facing off against a group of evil mutants (Unus, Lorelei, Blob and the Vanisher) who had come to the team looking for help...from the Sentinels (evil robots who planned on eradicating mutants, and it seems demi-gods, ex-Russian spies and demonic motorcycle riders as well)!

This was the end of the Champions run, but not quite the final end of the team....that was promised for an upcoming Avengers issue, but instead ended up in Peter Parker, the Spectacular Spider-Man....

Posted by Dave's Not Here Comic Blog at 7:30 AM