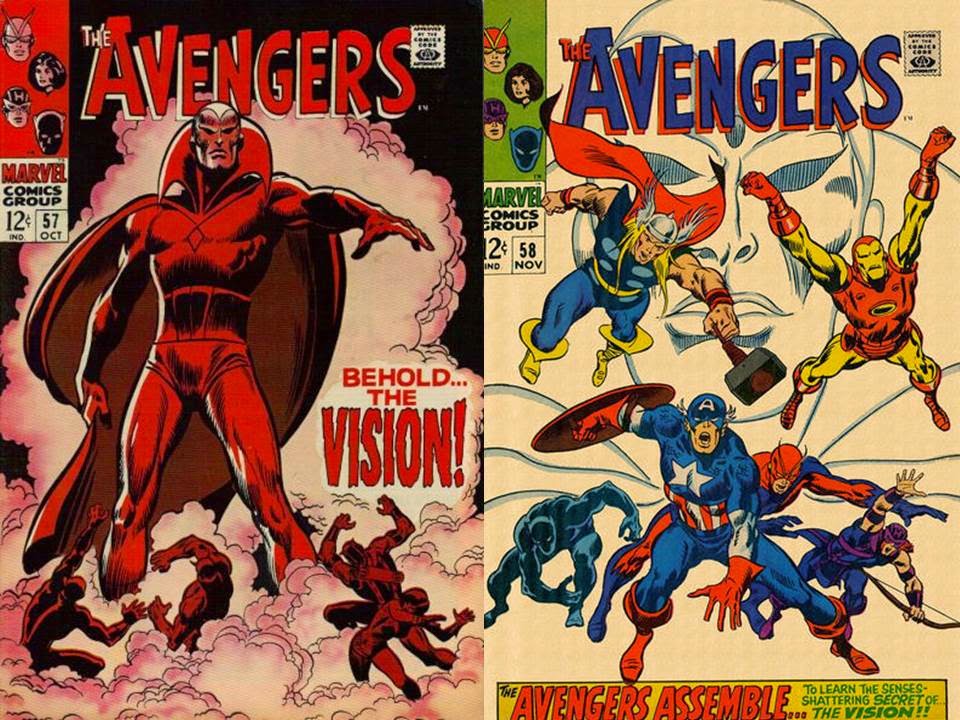 Continuing our coverage of the Roy Thomas' years of Avengers chronicles, with Roy's biggest contributions to the team, the Vision and Ultron!


The Vision, a synthozoid (synthetic android) who can control his own density and fires a solar beam through a jewel on his forehead, meets the team in his first appearance of Avengers #57 (October 1968 art by John Buscema), and after a quick fight with the Avengers, reveals that Ultron built him to destroy them, but instead he helps the group to defeat Ultron.

Visions Of Things To Come


Vision joins the team in Avengers #58, (November 1968, drawn by John Buscema), where it is revealed that the Vision possesses the brain patterns of the supposedly dead Wonder Man (given to him by the evil Ultron), and that Hank Pym is the creator of Ultron! (Not the least of the secrets concerning the Vision, Wonder Man and Ultron, but the ones available to the Avengers at this time…). 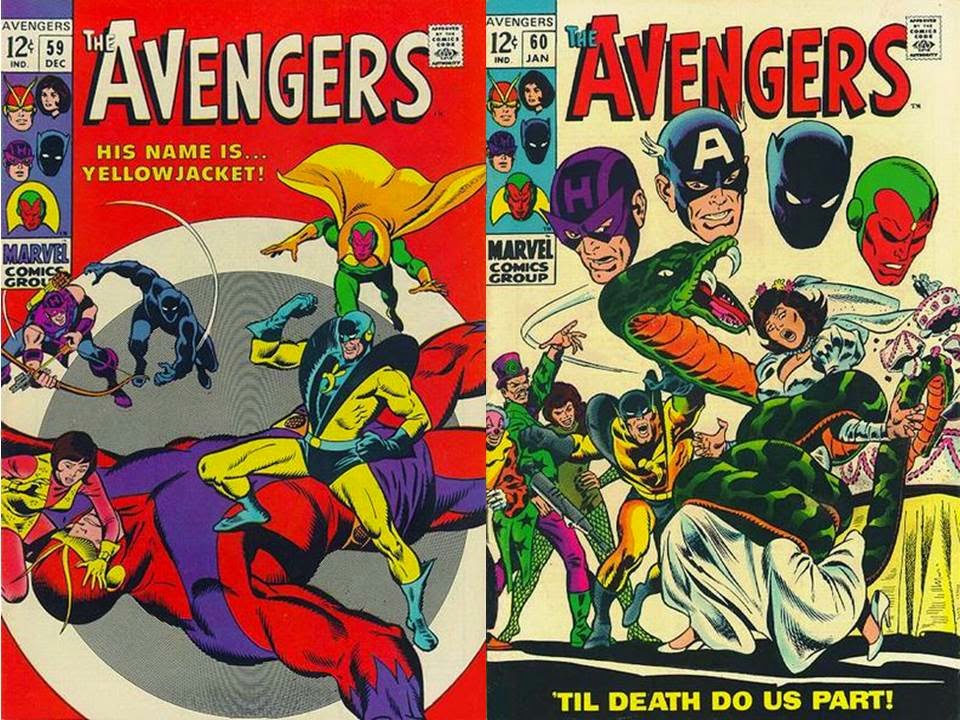 The team plans to confront Goliath, but has to deal with Yellowjacket in Avengers #59, (December 1968, art by John Buscema) and Yellowjacket claims to have killed Goliath, and wants to be a member of the Avengers. Strangely, the team accepts this, and the Wasp even marries Yellowjacket in Avengers #60 (all the while fighting the Ringmaster and his Circus of Crime in January 1969 drawn by John Buscema)! Janet does this because she knows Yellowjacket is Hank Pym (aka Goliath)! Hank explains away his temporary insanity (and it is later revealed that the team was playing along with Hank to help him…still, when he returns to the team after a honeymoon with the Wasp, he keeps the identity of the Yellowjacket, which foreshadows the many identity problems that Hank Pym will have in the future. Some of the guests at the wedding who would be Avengers in the future made their first appearance in the Avengers title, including the Inhuman elemental Crystal, man without fear Daredevil and sorcerer supreme Dr. Strange (who also sticks around to help the newer Black Knight…but more on him in a bit). 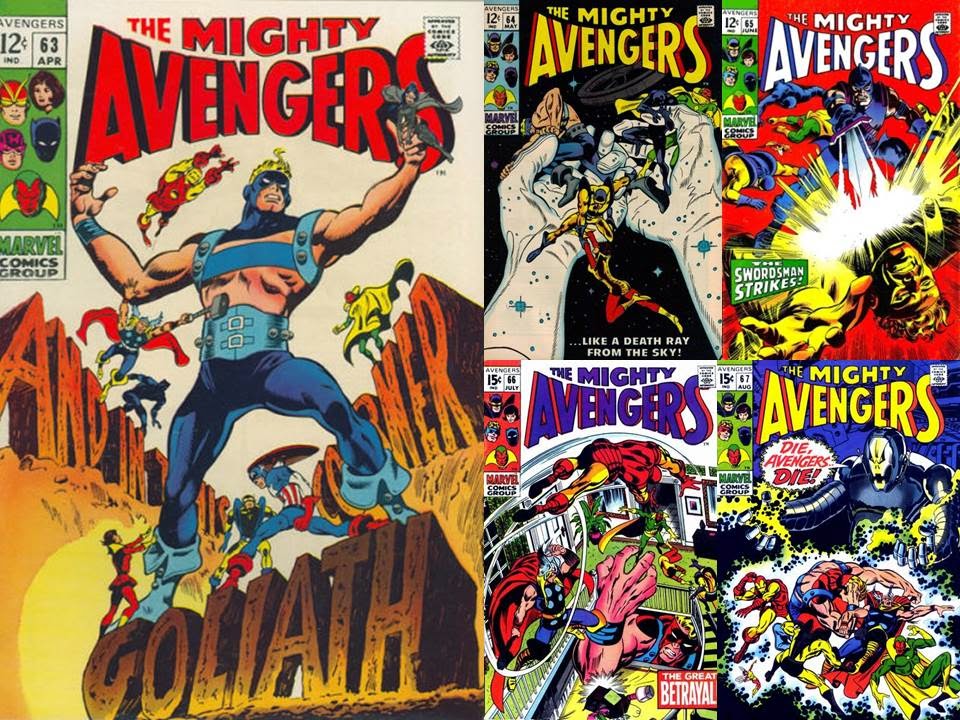 Change is afoot, as Hawkeye deals with a broken bowstring by adopting the identity of Goliath to save the Black Widow from the Puppet Master, Mad Thinker and old Ant-Man/Giant-Man foe, Egghead in Avengers #63, (April 1969, art by Gene Colan) where Clint Barton also keeps this new look and power as the new giant on the Avengers... 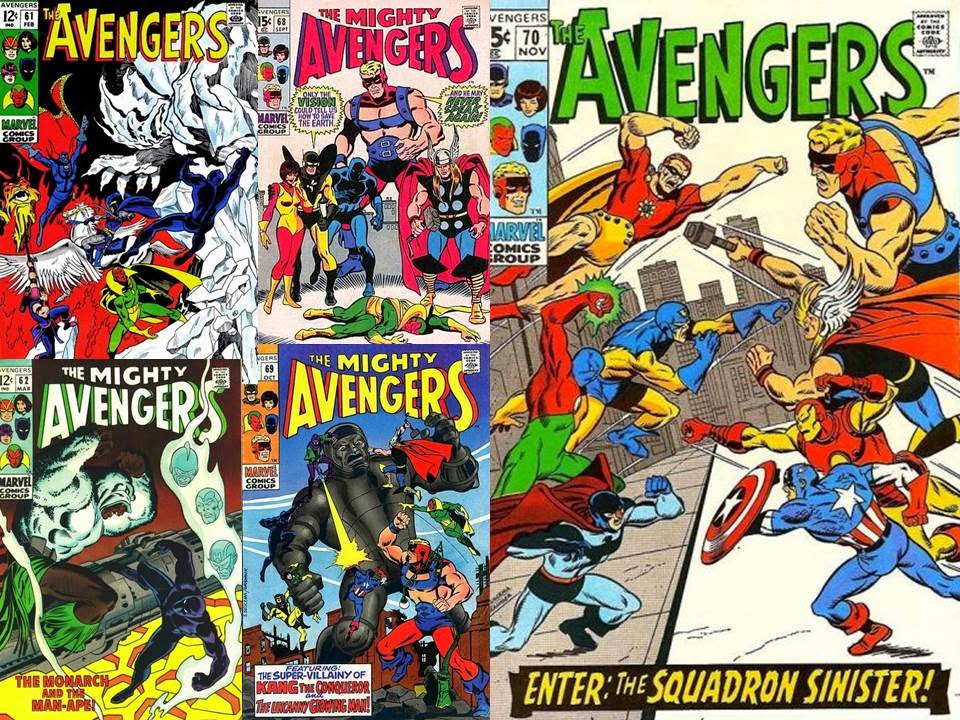 ...but still has to deal with old problems (like the Swordsman, Ultron and Kang) as well as new (like the alien gaming Grandmaster and his distinguished creations, the Squadron Sinister – a team of villains composed of oddly familiar looking people – a strong flying alien Hyperion, speedster Whizzer and power-beam welding Dr. Spectrum and a dark knighted Nighthawk) who fight the Avengers over the period of Avengers #69-70, both drawn by Sal Buscema. 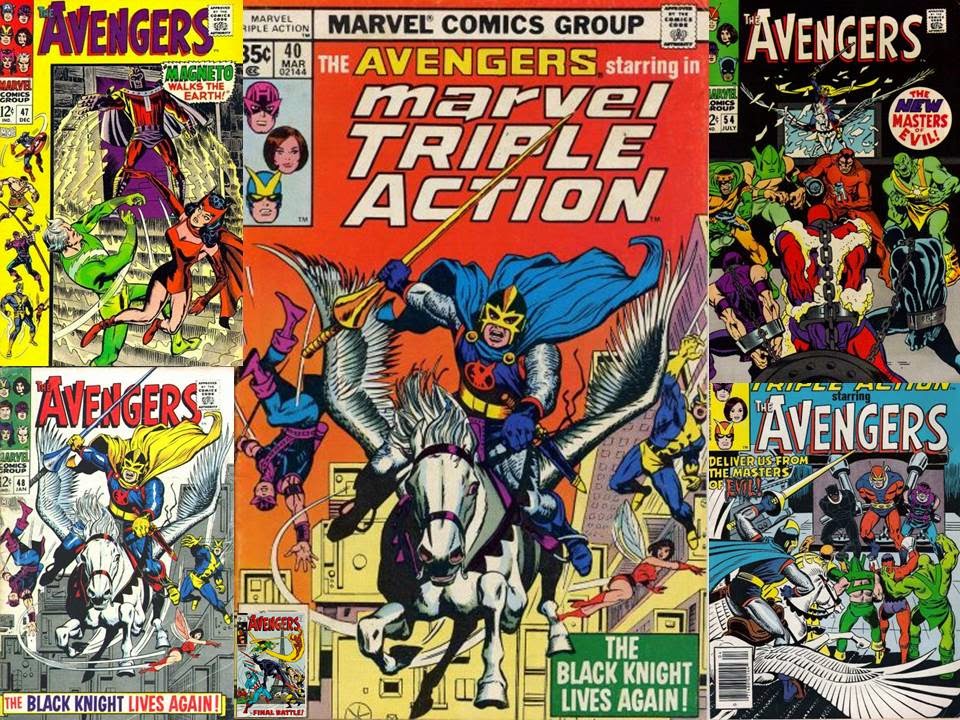 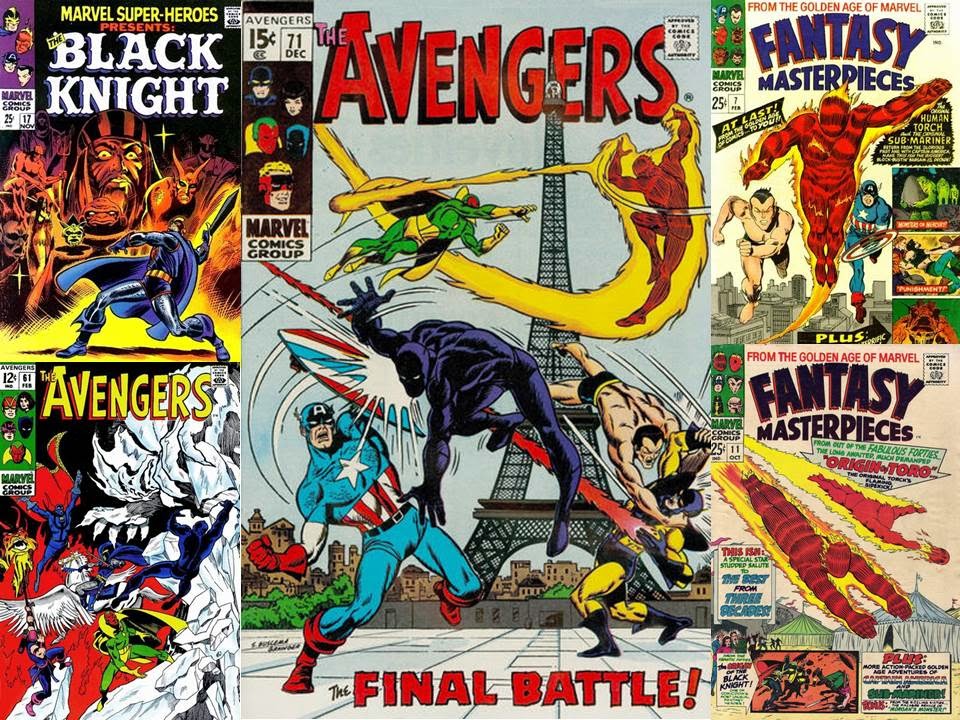 It is later revealed that the Black Knight is a long, noble tradition dating back through a lineage to the 12th century, defending the land against invaders, and after an encounter with the ghost of Sir Percy of Scandia (the original Black Knight, in Marvel Super-Heroes #17, November, 1968 by Roy Thomas and Howard Purcell), he proved worthy to draw the Ebony Blade (his own version of Excalibur) and gained that as a weapon, whose enchantments allowed him to help the Avengers (and Dr. Strange) in Avengers #61 (February 1969, art by John Buscema) against Asgardian villains Surtur and Ymir, and returned to aid the team in the battle of Kang and the Grandmaster, and led to the team taking him on in Avengers #71 (December, 1969, art by Sal Buscema, and, is it ironic that the team ends up in World War II again, and meets an early Captain America, the android Human Torch and Sub-Mariner, right when they are forming the Invaders? Cap deals with the Black Panther as they’ve met before though not yet, and Yellowjacket might be angry with Sub-Mariner since Namor took his Giant-Man spot in Tales To Astonish, but what is the relationship between Vision and the Human Torch?). 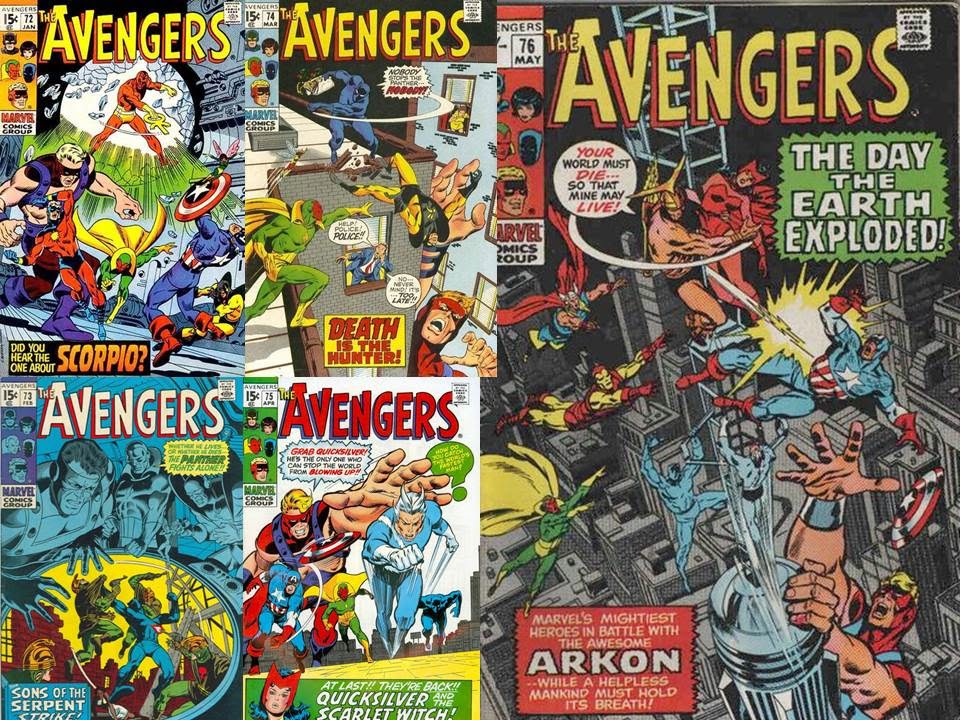 Still, the Avengers return home to more foes, facing the Zodiac (a team of technology enhanced mobsters based on astrological signs) finding out that Nick Fury hadn’t been killed by Scorpio, and meeting up with the Kree Captain Marvel for the first time, as well as reencountering Rick Jones in Avengers #72 (January 1970, art by Sal Buscema). The team then meet an alternate world barbarian named of Arkon from Polemachus (premiering in Avengers #75, drawn by John Buscema for April 1970) who was seduced by the Enchantress, and she also took an interest in the Black Knight – whose Ebony Blade was cursed, making him more violent and prone to rage). The eventual end of this encounter with Arkon (in Avengers #84, January, 1971, art by John Buscema) left Black Knight without his blade for a time, so he left the team for a time. 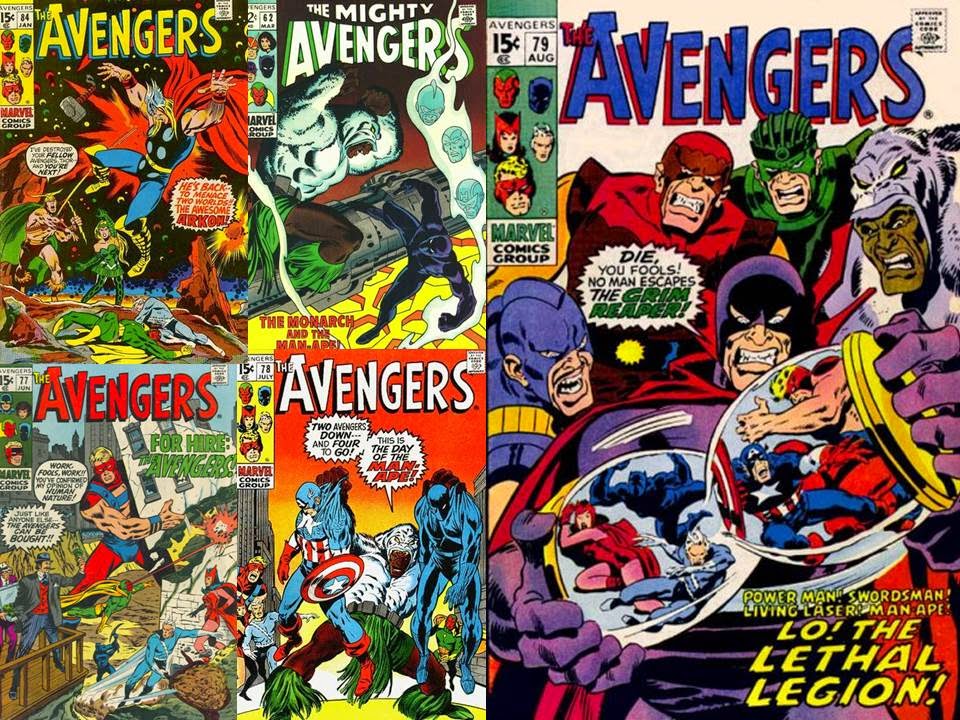 A new group of villains came into being to face the Avengers but its members were old foes.
They were called the Lethal Legion, and they first attacked the Avengers with Avengers #78 (July, 1970, with art by Sal Buscema), and their roster included the Swordsman, Power Man, the Living Laser, the Grim Reaper, and the Man-Ape (a foe of the Black Panther, who first appeared in Avengers #62, March, 1969, with art by John Buscema).

The Avengers stopped them in Avengers #79 (August 1970, drawn by John Buscema). 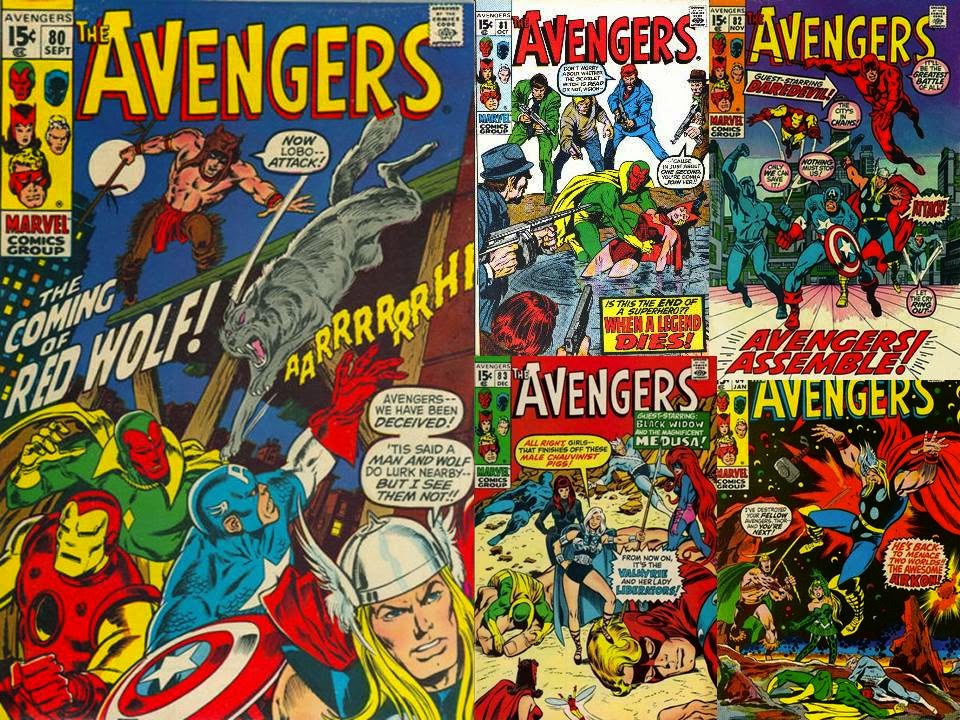 The past comes alive again, as there is yet another legacy hero introduced, the current version of the Red Wolf, in Avengers #80. (September 1970, art by John Buscema).

With the help of Daredevil, they face the Zodiac again in Avengers #81-82.

The women get into the team-building act as the Valkyrie is introduced, and tries to form the Lady Liberators with the Wasp, the Scarlet Witch, the former Frightful Four member Inhuman Medusa, and still not Avenger Black Widow which all happens in Avengers #83 (December 1970, art by John Buscema). All this doesn’t happen as it’s a plot by the Enchantress, which leads to her fleeing to Arkon’s realm for a time. 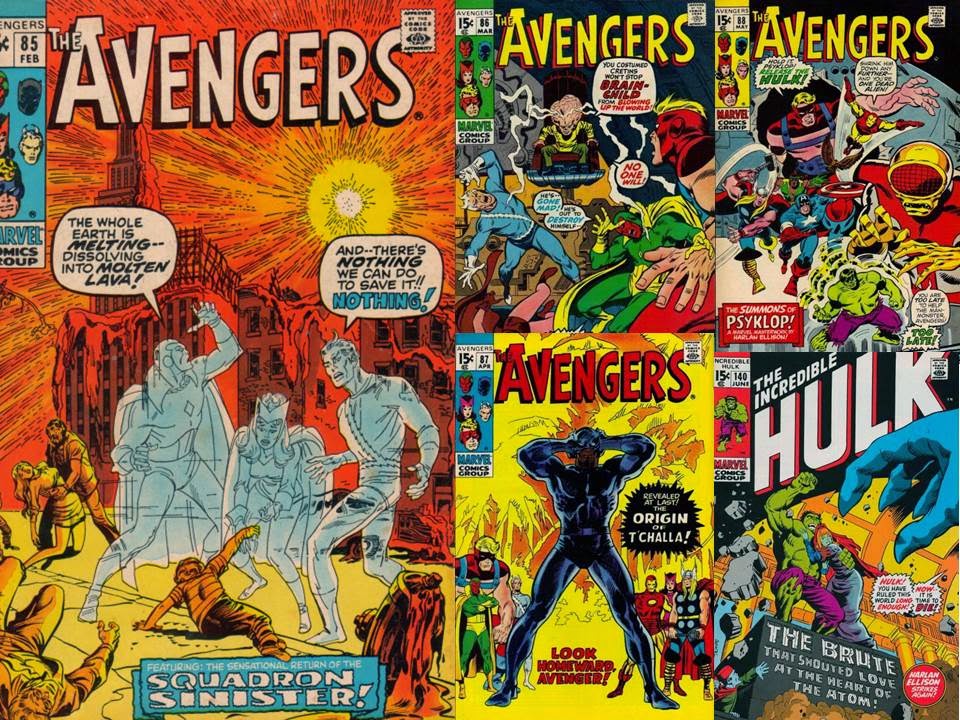 With Avengers #85-86, we found out why the Squadron Sinister were so familiar…they were based on the Squadron Supreme…heroes from an alternate Earth that included the high-flying American Eagle, beam-welding Dr. Spectrum, their own archer named Hawkeye, his girl friend with a sonic cry Lady Lark, super-strong Hyperion, small scientist Tom Thumb, brooding dark crime-fighter Nighthawk and speedster the Whizzer. The team had to stop the evil Brain-Child from destroying their Earth. This sets the stage for a whole future of crisis between the Marvel Earth and the world of the Squadron Supreme, and also is where the Avengers will prepare for one of their larger battles…after a brief meeting with the Hulk in Avengers #88 (that also featured future Avenger and partner to Captain America, the high-flying Falcon, in his first Avengers appearance).

All this leading up to the most important battle in the lives of the Avengers (as well as everyone on Earth....coming soon!).