Avengers Opposite: More Masters of Evil 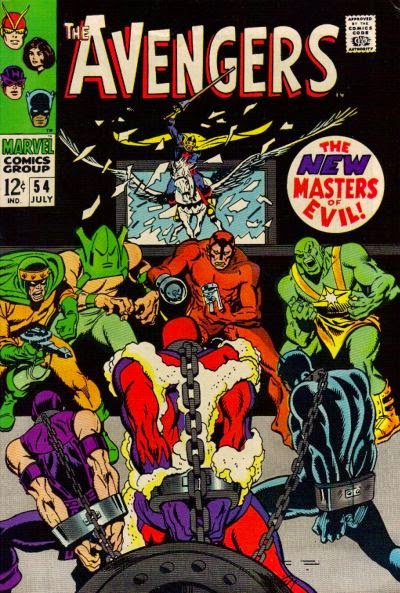 The Masters of Evil returned to face the Avengers with Avengers #54 (July, 1968) by Roy Thomas and John Buscema...

...and this cover by John Buscema.


What wonderful additional villains did they bring to face Earth's Mightiest Heroes? 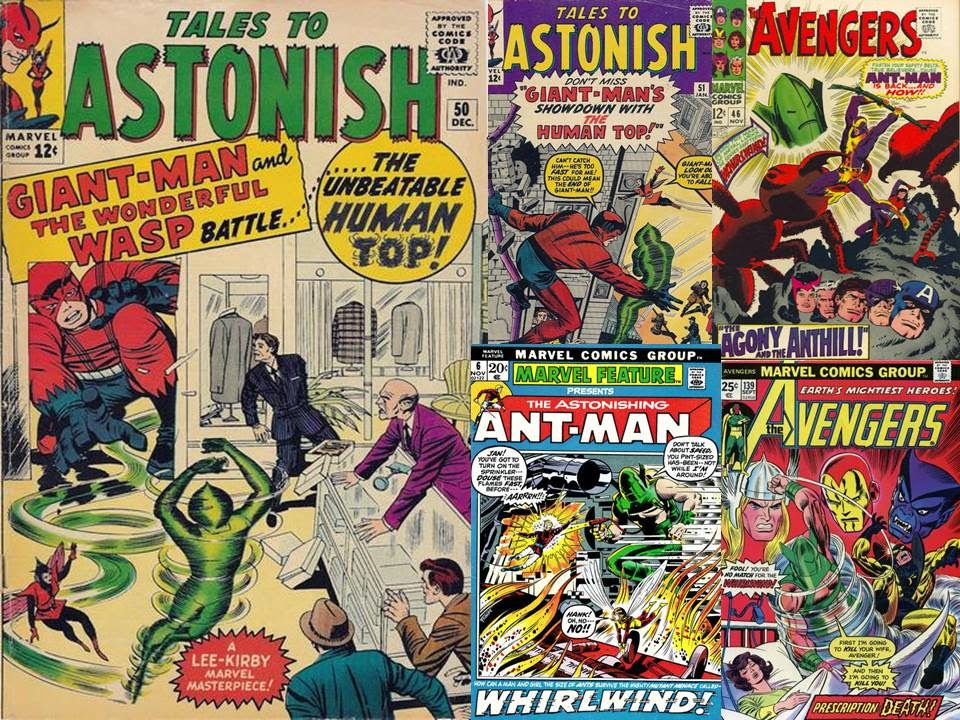 Whirlwind started out as the Human Top in Tales To Astonish #50 (December, 1963 by Stan Lee and Jack Kirby), fighting against Giant-Man and the Wasp!  David Cannon was a mutant with superhuman speed and a really bad attitude! 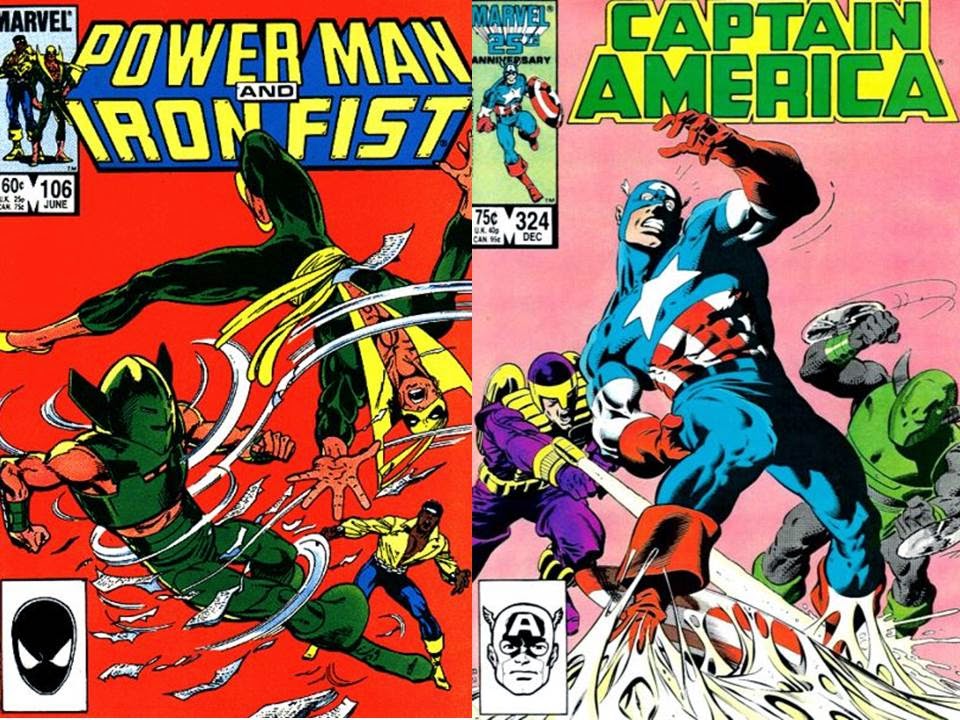 David returned to face the duo in Tales To Astonish #51, #55, #59, #68 and #69, and even was one of the many menaces at the wedding of Reed and Sue Richards in Fantastic Four Annual #3....soon after which, he upgraded his costume and became Whirlwind (starting in Avengers #46 in November, 1967 also by Thomas and Buscema)....continuing to mess with the Wasp and Hank Pym (in all his identities like Ant-Man, Goliath and Yellowjacket), as well as being a member of the Masters of Evil (and other villain groups, like the Lethal Legion). 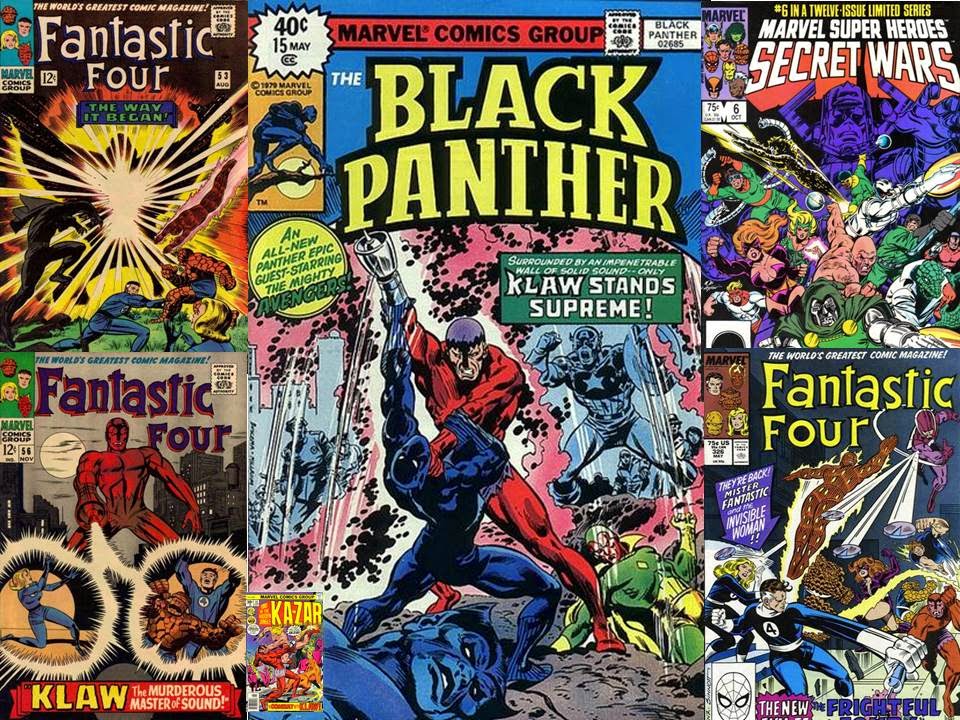 Klaw started out as a physicist who needed Vibranium to power his sound transducer, and the only place he could get it was in Black Panther's country of Wakanda.  So, in Fantastic Four #53 (November, 1966, by Stan Lee and Jack Kirby), Ulysses Klaw invaded the land a long time ago, but was held back...but, Klaw was wounded, losing his hand, and returned many years later, with a sonic blaster replacing his hand, and faced and lost to the Black Panther and the Fantastic Four (returning again in Fantastic Four #56, this time as a man made of sound...except for his sonic blaster hand). 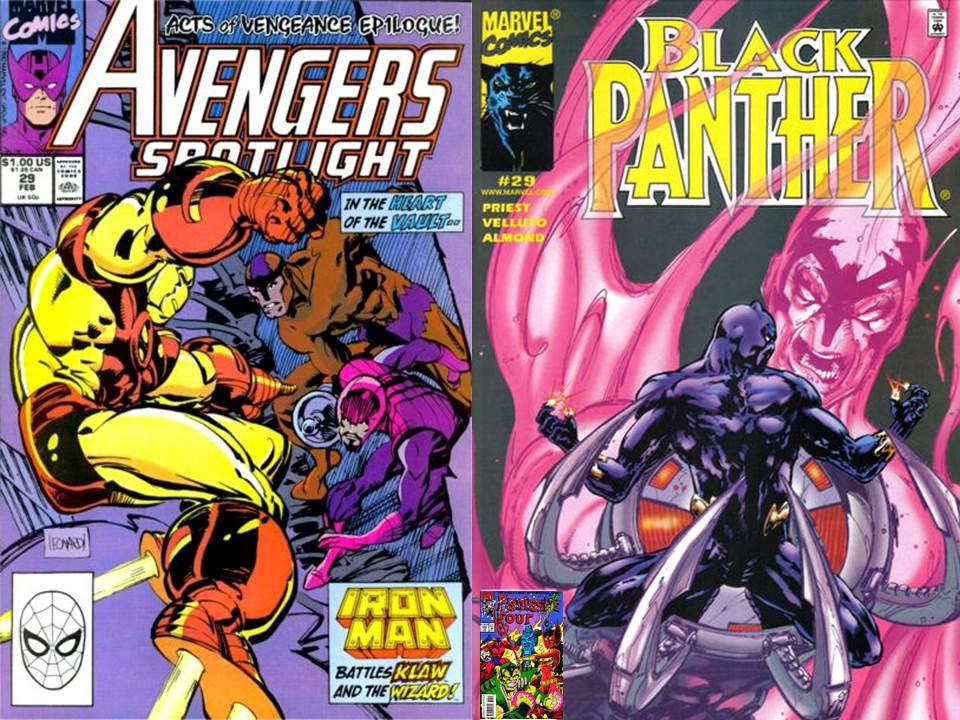 Klaw joined the Masters of Evil right after that encounter, and returned again and again, facing the Avengers, the Fantastic Four, and even Ka-Zar and the Dazzler as well, before being recruited the Beyonder for the Marvel Super Heroes Secret Wars (working with other Masters of Evil like the Enchantress and later members like Absorbing Man, Titania and the Wrecking Crew), and returning to Earth, and fought the Black Panther again as well, and even joined the foes of the Fantastic Four in the Frightful Four. 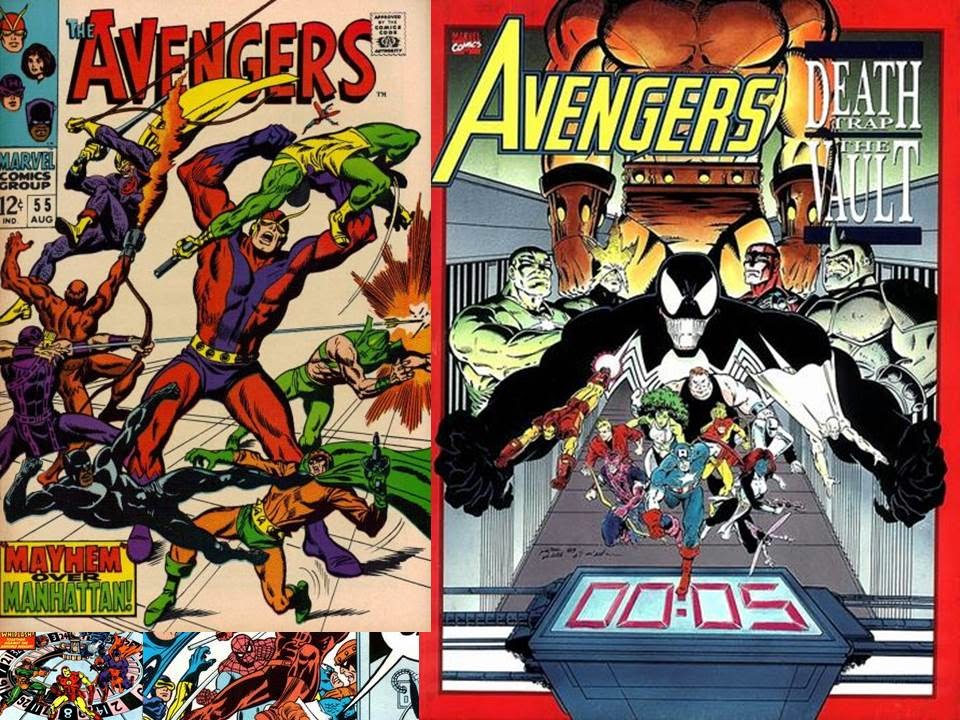 Radioactive Man and the Melter returned to the group as well...

...and they had been charter members of the team, returning to face off against the Avengers again...as they would do in the future!

A Spy In The Ranks 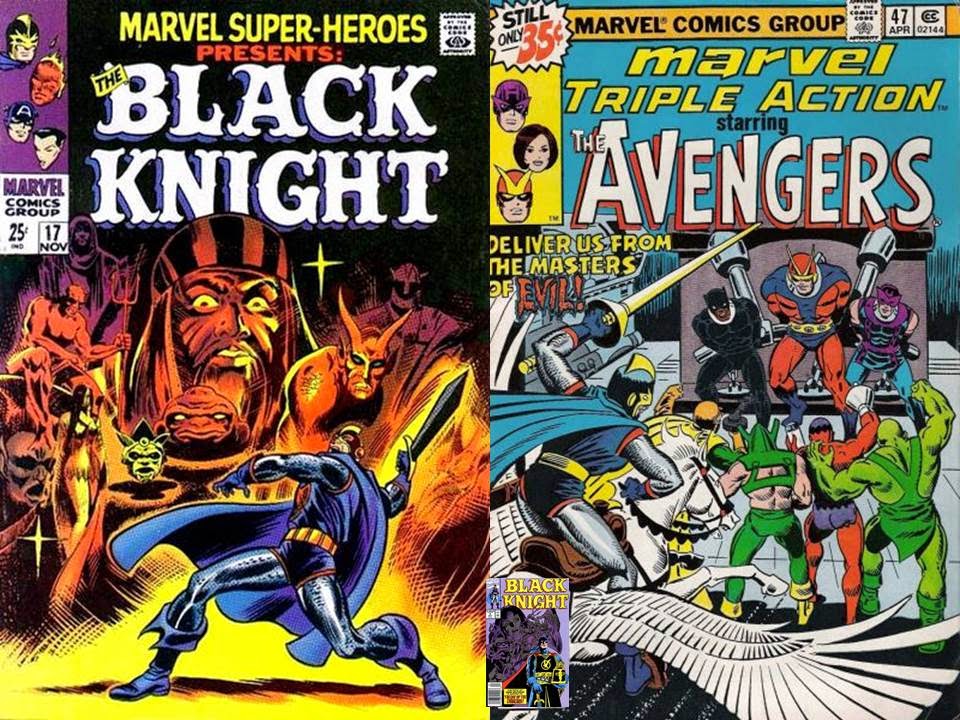 Black Knight was Dane Whitman, who took over from the original Masters of Evil's original Black Knight...


...but he was really a hero, and ended up helping out the Avengers against the villains, and their mysterious leader.... 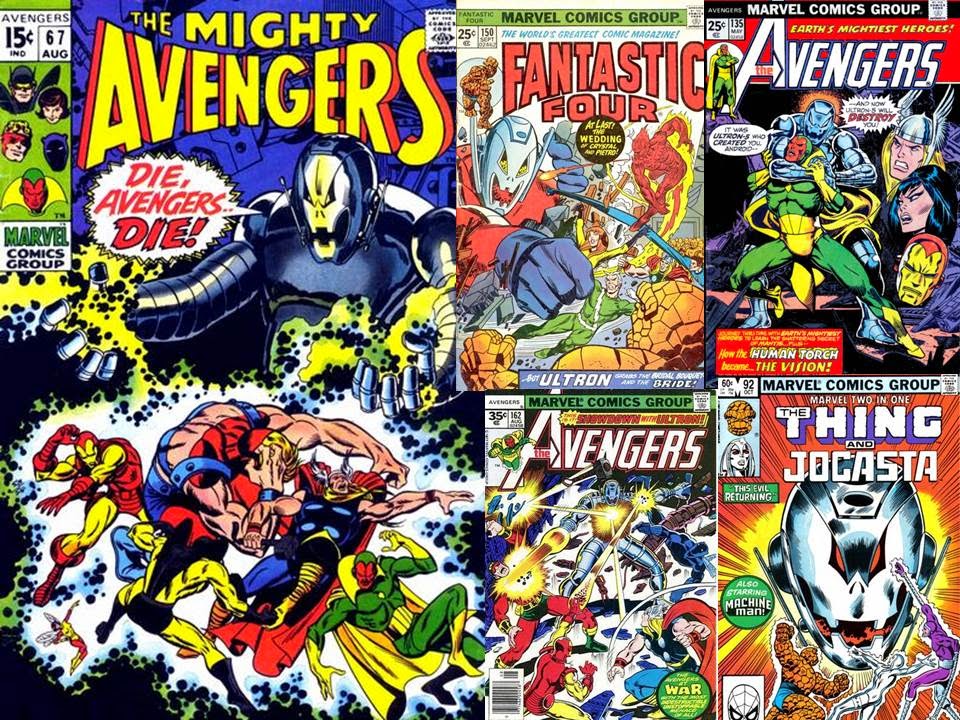 ...would you believe it was the Avengers' butler, Jarvis?  You shouldn't, because it really wasn't (but it wasn't Baron Zemo either....).  Underneath the cowl of the Crimson Cowl was Jarvis, but he was really just a hypnotized pawn of the real villain, Ultron!

Ultron was created by Hank Pym, endowed with a copy of his brainwaves (which, as Hank's size-changing was making him more unstable meant that the robot was likewise mentally unbalanced), Ultron hypnotized Hank into forgetting he created the robot....and went about planning to attack the human race.  Ultron failed with his gathering of Avengers villains, but soon returned, creating the Vision to infiltrate the team (getting help from the Grim Reaper so he could give the Vision Wonder Man's brainwave patterns, and getting the body of the original android Human Torch from Fantastic Four foe, the Mad Thinker), Ultron continued his attack against the super-hero team (but was betrayed by the Vision). 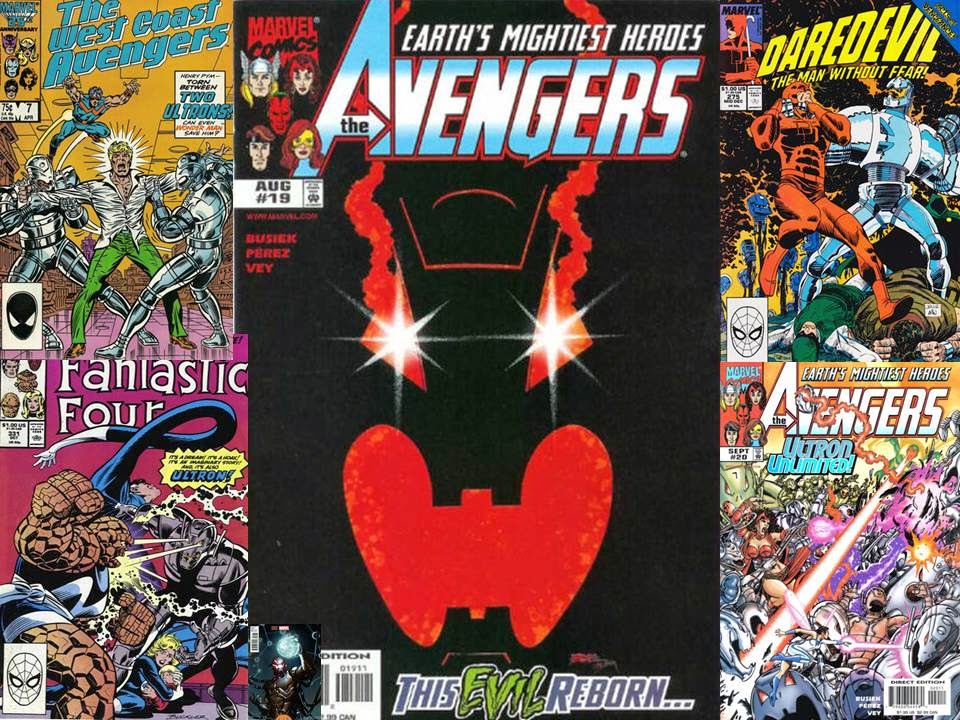 Ultron has come back many times over the years, facing the Fantastic Four as well, and looking for a bride of his own (creating the android Jocasta).  Ultron was even a part of the Marvel Super Heroes Secret Wars, wherein he was used as a pawn by Dr. Doom...but he returned again as a villain in his own right, being a true menace to the Avengers and the entire human race every time he comes back!

Posted by Dave's Not Here Comic Blog at 5:00 AM