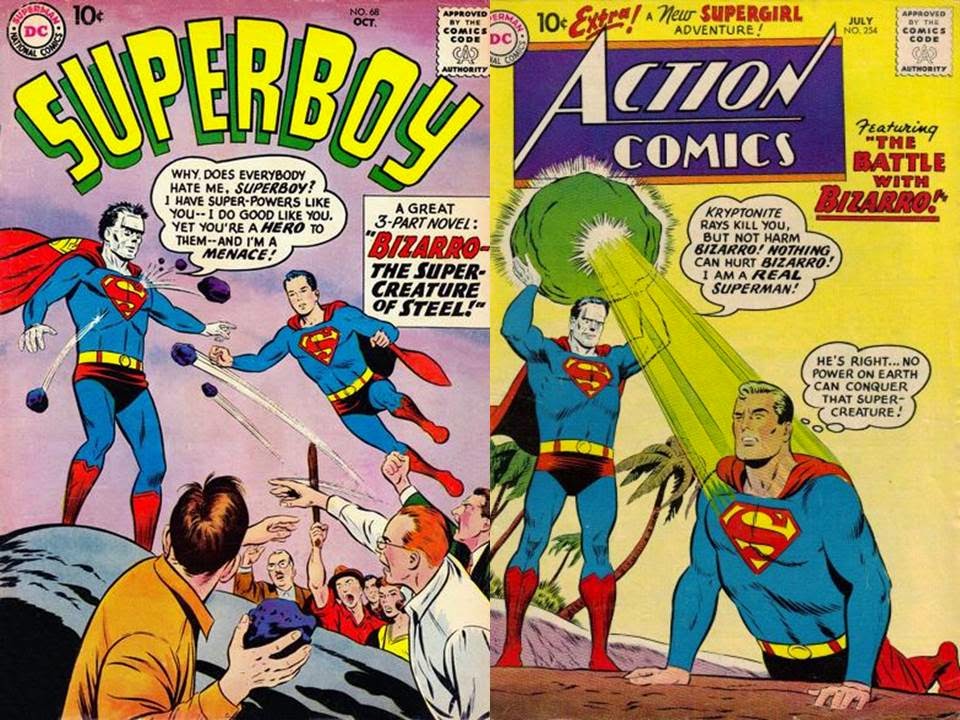 So, you probably know Batman, the World’s Greatest Detective, but how about the World’s Biggest Fool?

Well, that wouldn’t be Bizarro Batman…which means it likely is, in Bizarro speak!


Bizarro first came to be in Superboy #68 (October, 1958), with Professor Dalton’s duplicator ray, but the bizarre duplicate of Superboy didn’t stick around long. Lex Luthor, using Professor Dalton’s ray in Action Comics #254 (July, 1959) created a more long lasting version of Superman (and, in the next issue, Lois Lane as well…and eventually, a whole world of Bizarros!). 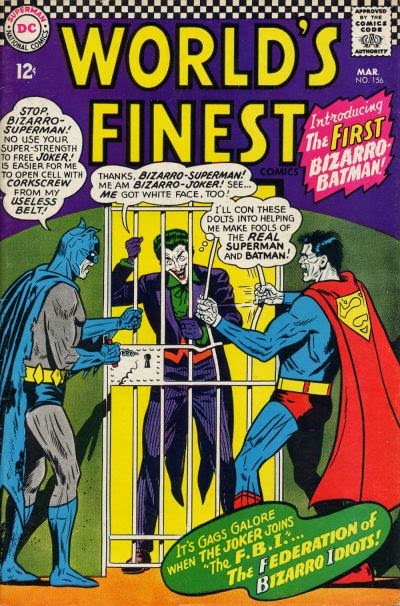 That brings us to Bizarro-Batman, with his first appearance in “The Federation of Bizarro Idiots” in World’s Finest Comics #156 (March, 1966, with story by Edmond Hamilton and art by Curt Swan).
Bizarro need a buddy (or wouldn’t that be an enemy to him) and created Bizarro-Batman, and the odd pair went around Earth creating trouble (and being shadowed by Jimmy Olsen and Robin, to prevent the Bizarros from revealing the heroes alter egos!). Along the way, we found out about Bizarro-Batman’s Bat-Jalopy, his Useless Belt (full of cigar ashes, old cigarette butts, used bottlecaps and rusty nails), and of course, the Bat-Tower, Bizzaro-Batman’s “secret headquarters” (that had signs pointing the way!).


The villains even freed the Joker along the way, apparently to help him (but they just handed him over to Superman and Batman when they got back). The heroes had to work hard to get the Bizarro duo to leave Earth and go back to Bizarro World but they did, eventually. 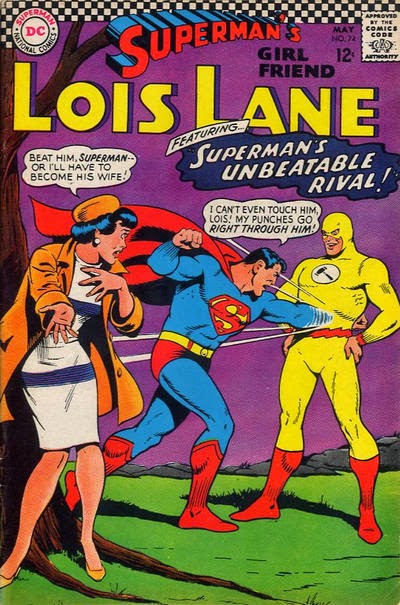 Bizarro-Batman (as well as Bizarro) next appeared in Superman’s Girlfriend, Lois Lane #74 (May, 1967 in a story by Leo Dorfman and Kurt Schaffenberger).

Won’t say much about this one, but, sadly, it hasn’t been reprinted yet (the first Bizarro-Batman tale was, in Showcase Presents: World’s Finest #3!


The original Superboy tale with Bizarro was reprinted in the first Superman Annual #2 in the 1960s, as well in the 1987 version of the Greatest Superman Stories Ever Told).

It also signaled the end of Bizarro stories at DC Comics, for at least a time (even if Bizarro made it into the Super Friends cartoon as a member of the Legion of Doom along with Luthor, Brainiac and Toyman!). 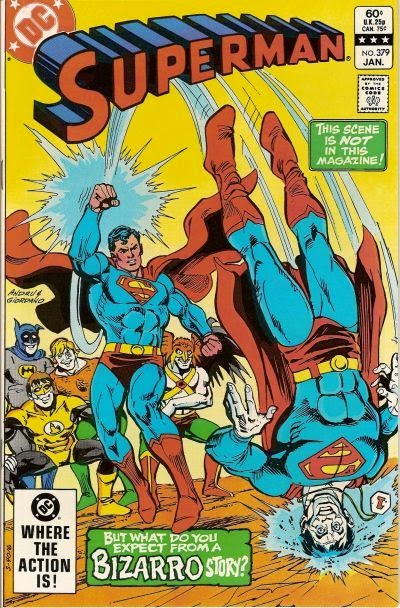 Bizarro-Batman sat out the 1970s (even though Bizarro made a few stops in Superman and the Secret Society of Super-Villains), but did return with Superman #379 (January, 1983, by Cary Bates and Curt Swan) with “The Bizarro-Buster is Loose”…and was he ever!


This time around, there was a whole Bizarro Justice League, including Bizarro-Flash, Bizarro-Aquaman, Bizarro-Yellow Lantern (the reverse of Green Lantern) and Bizarro-Hawkman…and that group needed help from Bizarro-Luthor (who had appeared before, back in Bizarro’s own series in Adventure Comics!).


Still, the menace the Bizarros faced was looming…and it was that comics were getting a little more serious, and such foolishness as a “Bizarro Batman” wouldn’t be allowed for a while… 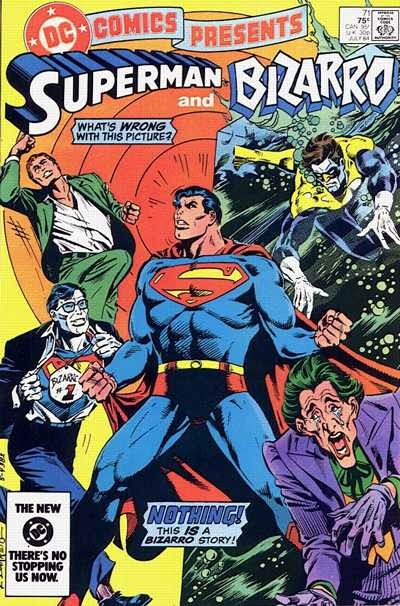 That issue was the last appearance of Bizarro-Batman, but the Bizarro Justice League popped up again in DC Comics Presents #71 (July, 1984), adding a Bizarro-Wonder Woman to the roster, as well as Bizarro-Amazo, Bizarro-Shaggy Man and Bizarro-Joker, all in the last pre-Crisis appearance of the Bizarros!

Still, even a Crisis couldn’t hold Bizarro down, as John Byrne did include a more scientific version of a bizarre duplicate of Superman in Man of Steel #5 (December, 1986), and another who came back later for a time, before a more mystic version of Bizarro came back during the Emperor Joker storyline. 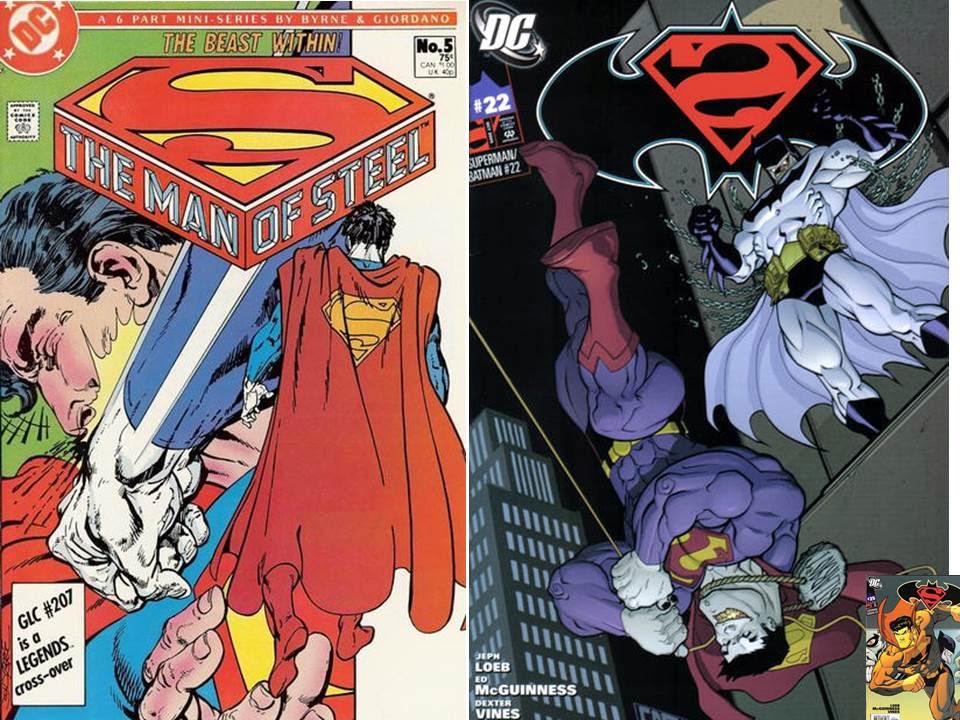 That storyline proved important, as it gave rise to Batzarro, who appeared in Superman/Batman #20-25 by Jeph Loeb and Ed McGuinness in 2005…proving that there was still a place for a little Silver Age foolishness even in the modern age!
Posted by Dave's Not Here Comic Blog at 5:30 AM