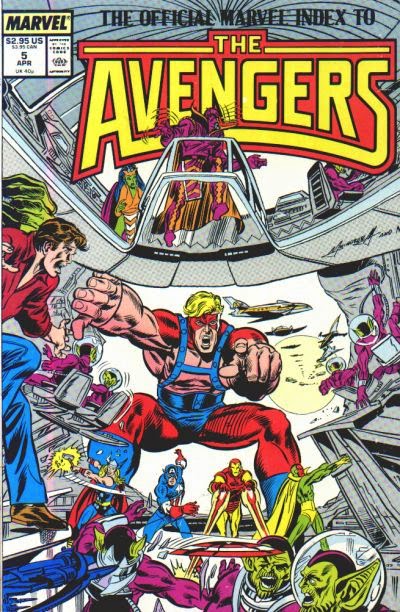 We start here with more on Roy Thomas' original run on the Avengers, and his most epic tale to date!


A galactic tale, spanning the history of Marvel Comics....and involving the two major interstellar races that have had contact with Earth....


It's all been leading up to this! 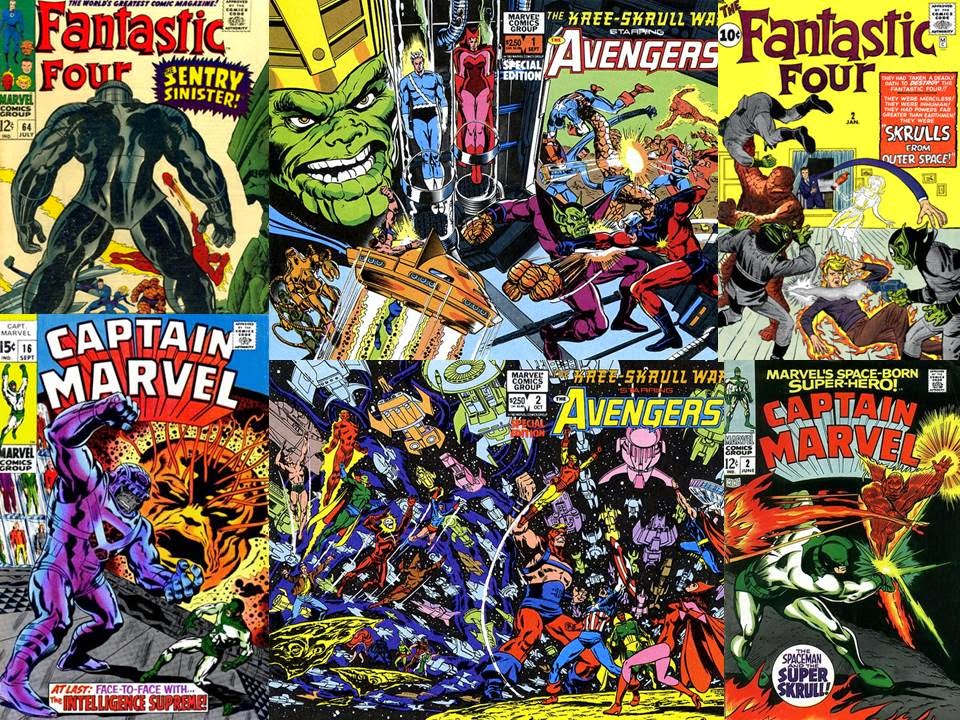 Now, the Kree were an intergalactic empire that are the home race of the original Captain Marvel (Mar-Vell, that is), and the Skrulls are shape-changing foes of the Fantastic Four.


Both races have been on Earth before (the Kree, involved in creating the Inhumans, and the Skrulls facing off against the 3D-Man), and battling each other through the cosmos, but things were beginning to heat up. 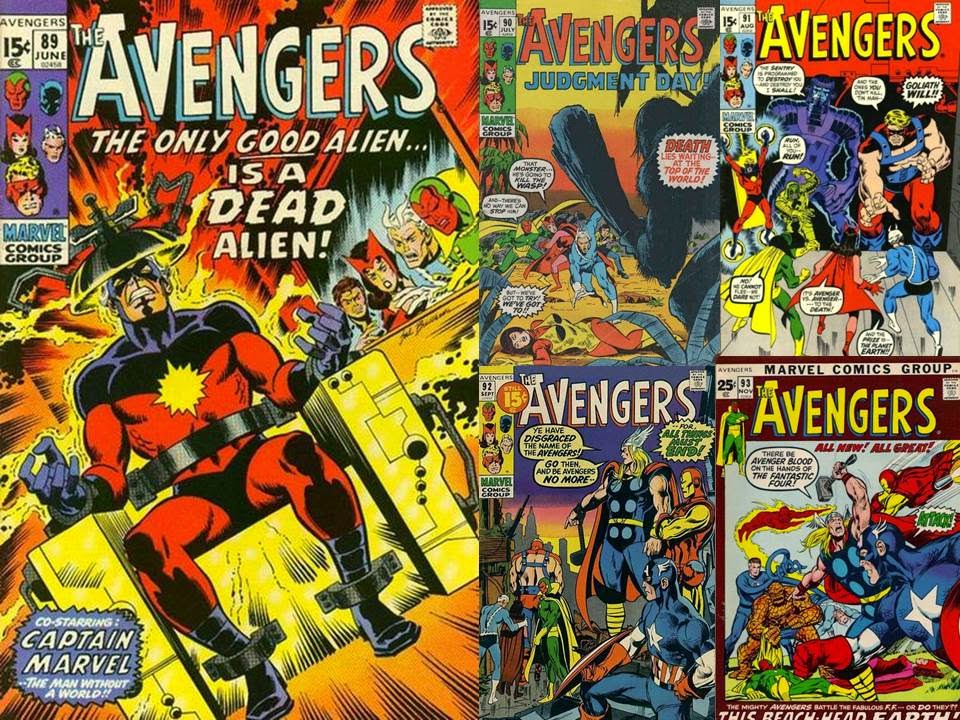 From Avengers #89-97, the heroes got between the warring races, trying to prevent the factions from destroying the Earth in their battles.


This fight ranged over the Earth, and involved not only the Avengers, but the Fantastic Four, Annihilus, the Inhumans, Maximus, Carol Danvers (she who would be Ms. Marvel/Binary/Warbird), the Super-Skrull, Sentry #459, Ronan the Accuser, as well as Hank Pym briefly returning to his Ant-Man identity... 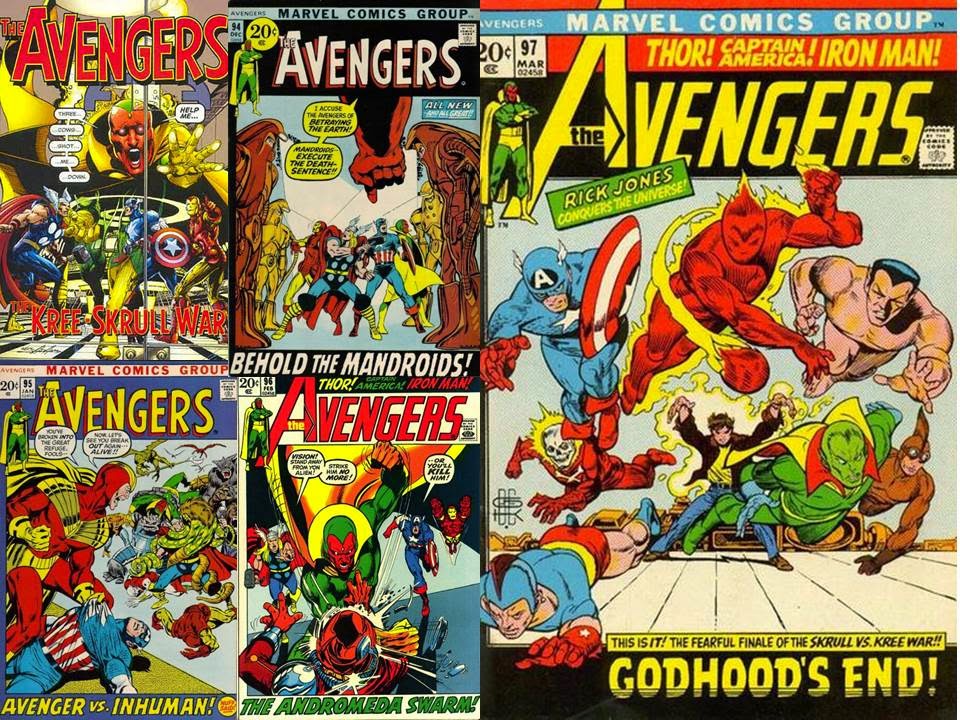 ...and would only end with the Kree Supreme Intelligence working with Rick Jones on unleashing Earth’s heroic myths.

This battle had many ramifications, leading to the formation of the Illuminati and Marvel’s Civil War (and is covered all too briefly but will be referred back to as needed).   With all this, the war didn’t involve all the Avengers, but the god of war planned to rectify that. 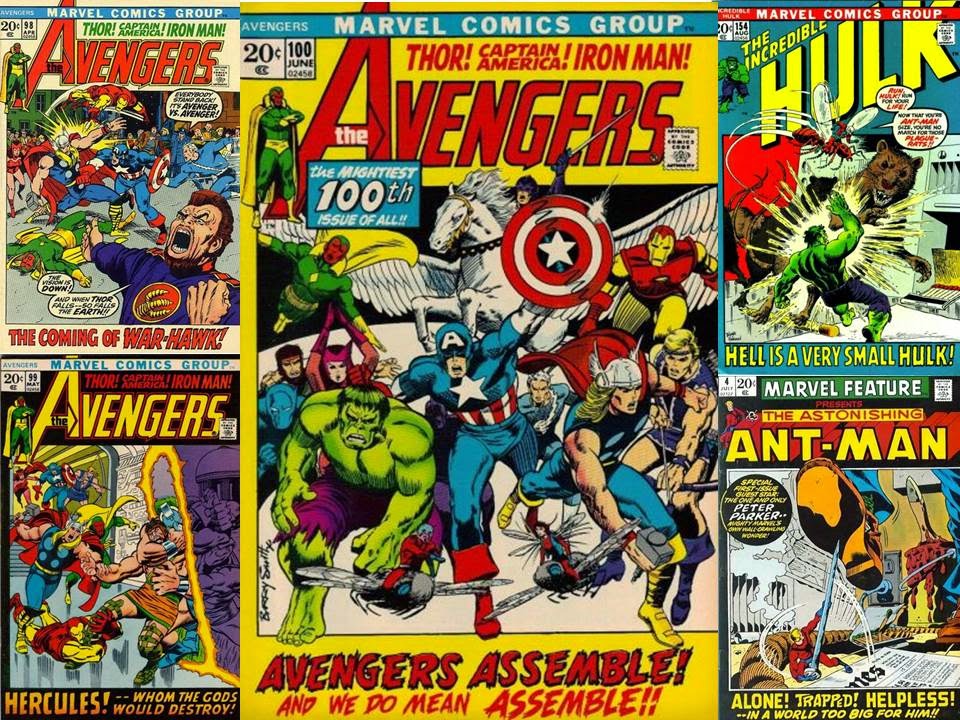 Olympian Ares ended up with the Black Knight’s Ebony Blade, and pursued his grudge against Hercules with help from the Enchantress in Avengers #98-100 (with art by Barry Windsor-Smith), where all members of the Avengers team reunited for the first time since their earliest days, including the usual hold-outs of the Hulk and the Swordsman, and Goliath/Clint Barton goes back to being Hawkeye in a costume he thankfully doesn’t keep for long!

Sadly, things did not end well for the Black Knight, as he kept the interest of the Enchantress. 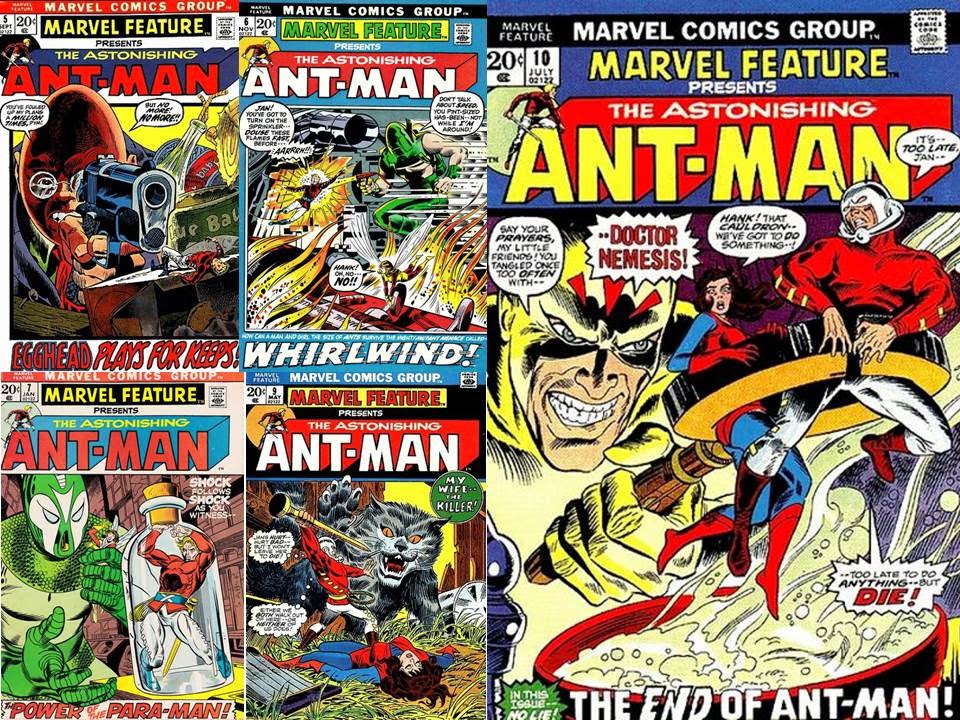 This larger team didn’t stay together, and the usual team stuck around, and a few members checked up on the Hulk.

After that, the Ant-Man and Wasp worked on their own for a while in Marvel Feature, facing familiar foes, like Egghead and Whirlwind, as well as Para-Man and Doctor Nemesis! 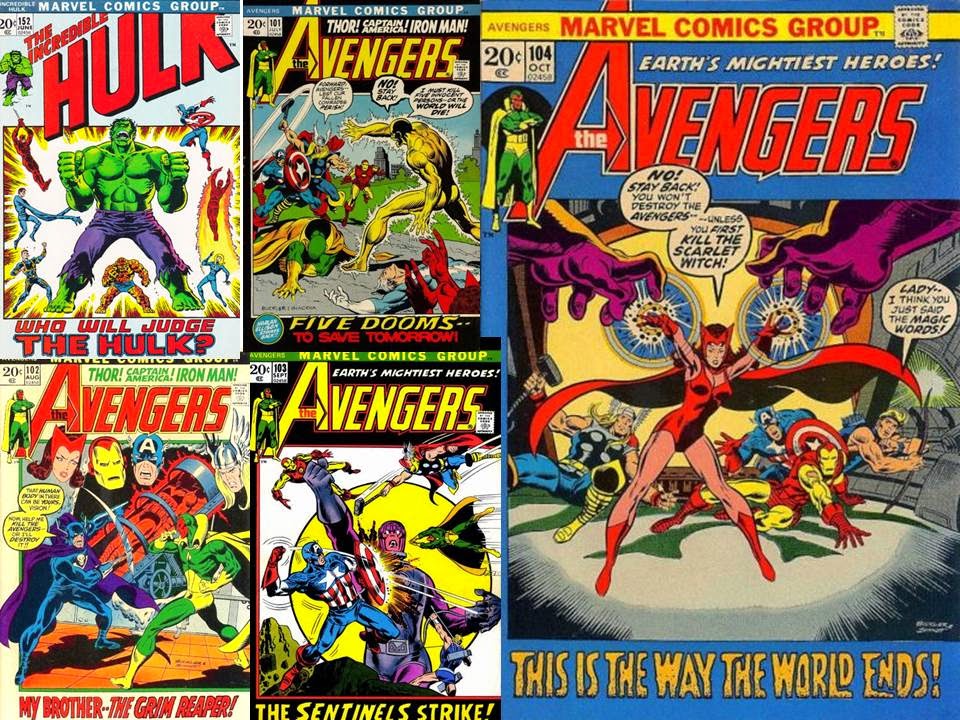 Then, a new menace in Avengers #101, and a return of the Grim Reaper in Avengers #102, (August 1972, art by Rich Buckler) giving the Vision a choice involving his brother, Wonder Man, where he chose independence, and a battle with the Sentinels in Avengers #103-104, Roy Thomas ended his first run on the Avengers (with the Scarlet Witch facing the Sentinels in “This Is The Way The World Ends”), leaving behind quite a legacy of stories for future writers to pick up on.

That will end the current rundown of the Avengers roster and history, until we assemble again, where we can pick up with what Steve Englehart did to the Avengers…and beyond!
Posted by Dave's Not Here Comic Blog at 6:30 AM