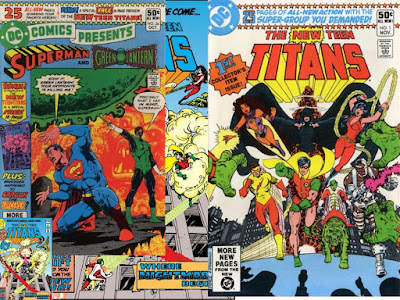 The Teen Titans had been having rough times, as the team had broken up in Teen Titans #53 (February, 1978), but it reunited a few times after that, but then, with DC Comics Presents #26 (October, 1980) and New Teen Titans #1 (November, 1980), the team was ready to go back to work, and stay around for a long time thanks to the work of Marv Wolfman and George Perez.

Robin, Kid Flash and Wonder Girl had been members for a long time....but, what about the new kids of Changeling, Raven, Cyborg and Starfire?

They all had history as well, some more than others..... 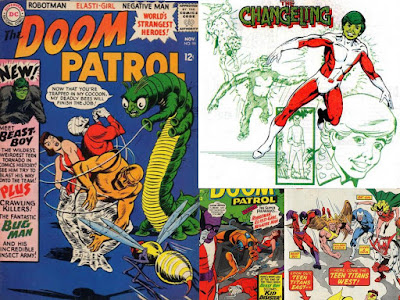 Garfield Logan started his super-hero career working with the Doom Patrol, in Doom Patrol #99 (November, 1965 by Arnold Drake and Bob Brown) as "The Beast-Boy", who shows up, as a kid with green skin and the ability to change into animals, looking to help out.  Later revealed (in the next issue), Gar contracted a rare disease in Africa, and his father found that green monkeys were immune to the disease. so transformed his son into a green monkey to give him the immunity, and, somehow the ability to transform into any animal stuck with the boy.  That ability was not enough to save Mark and Marie Logan, as Gar helplessly watched his parents drown, then ended up with a guardian, Nicolas Galtry (after flashback adventures later revealed in Doom Patrol #112 to #115 in 1967, with Gar foiling diamond mine thieves and Nazi war criminals before Galtry found the lad). 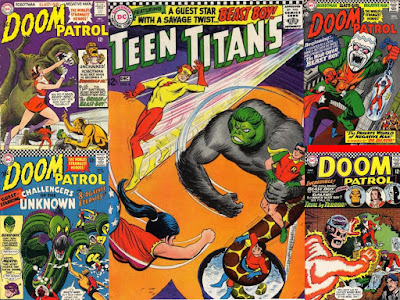 Galtry wouldn't let Beast Boy join the Doom Patrol (as Gar hid his Beast Boy identity from him), so Gar couldn't join the team, but Galtry was planning to kill the lad for his inheritance.  Beast Boy attends the wedding of Elasti-Girl and Mento (along with the Justice League of America and the Teen Titans), and Elasti-Girl discovers Galtry's plans in Doom Patrol #105 (August, 1966), then Mento finds out Galtry was financing Doom Patrol villain Mr. 103 in Doom Patrol #106 (September, 1966).  Gar works with the original Teen Titans in Teen Titans #6 (November-December, 1966), but is also unable to join them regularly....at least until Mento (Steve Dayton) and Elasti-Girl (Rita Farr) take custody of Gar in Doom Patrol #110 (March, 1967), though the Chief never does get around to making Beast Boy a member, as he gets involved in trying to rehabilitate Brotherhood of Evil member Madame Rouge (which doesn't work out).  Gar at least continues to work with the team and Mento until Doom Patrol #120 (July-August, 1968), and Madame Rogue (with the help of Nazi Captain Zahl, kills the team in the next issue). 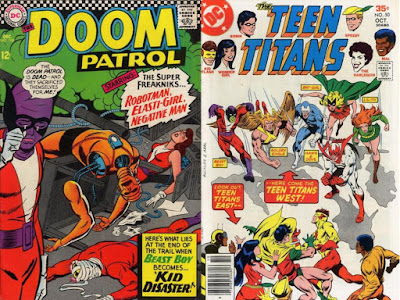 Gar shows up next in Teen Titans #50 (October, 1977) working on a sci-fi show (Space Trek: 2022) in California (his green skin and animal powers saving the production a ton of money), and when Mr. Esper and Captain Calamity cause a menace on each coast, joins up with Lilith, Hawk & Dove, Bat-Girl and Golden Eagle to form Titans West, which lasts for 2 more issues before the team slowly fades away, making Beast Boy a short lived Teen Titan. 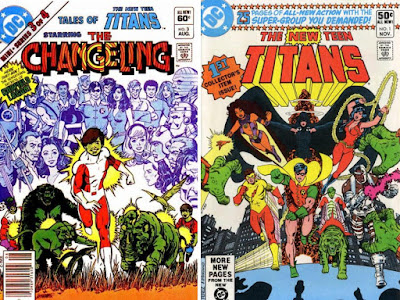 Still, Gar continues to work on the TV show as of the flashback tale in Tales of the New Teen Titans #3 (August, 1982 by Marv Wolfman, George Perez and Gene Day), at least until it is cancelled.  Then, Beast Boy tries to pick up the pieces of his own life, coming into conflict with what he believed was an old foe of the Doom Patrol, the armored Arsenal, who kidnapped his former girlfriend, Jillian Jackson.  Tracking him down, Gar found him, finding out it was really Galtry under the armor, who had hired the original Arsenal to attack the Doom Patrol....and Galtry took over the armor afterward and was trying to get more funds out of the young Mr. Logan or Ms. Jackson's parents.  Gar defeated Galtry, saving Jillian, but the villain's insults towards his Beast Boy name made him think that he needed a new super identity, which he took as Changeling when he next met with the Teen Titans. 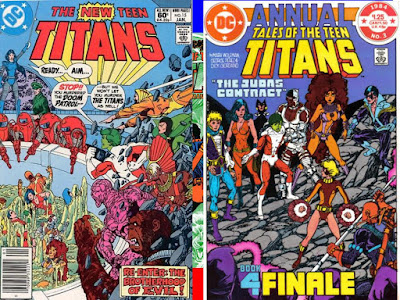 After rejoining the Teen Titans, Gar sticks around, working with the team (and a rebuilt Robotman, as well as the Brotherhood of Evil) to capture the killers of the Doom Patrol, as well as getting a new girlfriend in Terra (a girl who can literally move the Earth....though Gar's involvement with her turns tragic due to the interference of Titan foes, Deathstroke the Terminator and the H.I.V.E.).

Devil at the Door 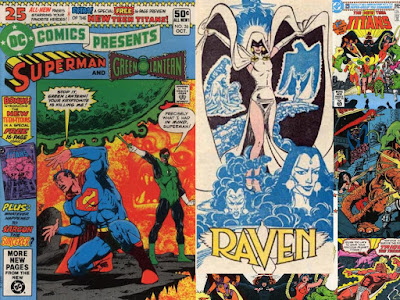 Trigon was an extradimensional demon looking to invade Earth, and his cult found a young woman named Arella, whom they brought into their group, and convinced to mate with their god....thus was produced Raven.  Yes, Raven was the daughter of Trigon, but Arella left the cult, planning to kill herself to prevent the child from being born.  Instead, Arella was found by extradimensional dwelling disciples of Azarath, who were a pacifistic people, who helped in Raven's birth, and helped Arella raise Raven, isolating the child, keeping her heritage a secret and training her to repress her emotions. 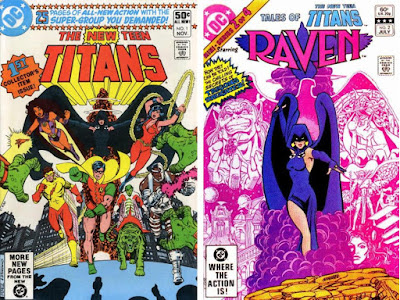 Juris, one of the followers of Azar, tried to kill Raven to prevent her father from manifesting, but instead ended up in Limbo himself.  Raven's lonely existence did give her time to learn how to use her powers of teleportation, astral projection and empathic healing.  After Azar's passing, Raven learned who her father was and went to confront him in Limbo against the wishes of Azar's followers, and Raven and Arella only survived because Trigon was sure he could turn Raven to his side once in Earth's dimension (this story related in flashback in Tales of the New Teen Titans #2 of July, 1982, by Marv Wolfman, George Perez and Pablo Marcos). 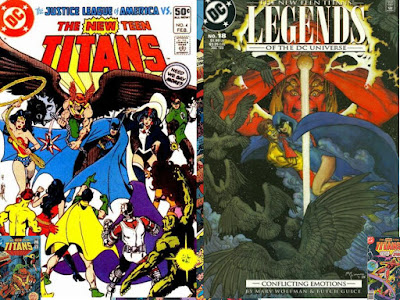 After approaching the Justice League in attempt to convince them to help her against Trigon and being rebuffed (due to the League's sorceress, Zatanna, sensing Trigon's evil within Raven), she recruited Kid Flash (by using her powers to make him think he was in love with her, a tale told in Legends of the DC Universe #18 of July, 1999, by Marv Wolfman and Butch Guice), Raven then went to influence Robin, showing him bits of his future (including new Teen Titans Cyborg and Starfire) in DC Comics Presents #26 (October, 1980 by Wolfman, Perez and Dick Giordano), leading to the team uniting for real in New Teen Titans #1 (November, 1980, by Wolfman, Perez and Romeo Tanghal). 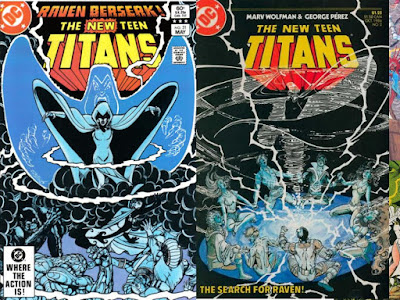 After the team's first mission of fighting Trigon (as well as a few distractions), the group did come to accept Raven, and tried to help the young, repressed woman to get use to life on Earth, with Raven slowly succumbing to Trigon's temptation for a time, and releasing him to face the Teen Titans again, nearly taking Earth, before he was defeated (and Raven freed from his influence for a time, changing her robes from blue to white). 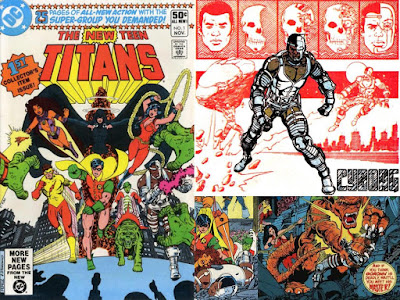 Victor Stone was born to Professors Silas and Elinore Stone of S.T.A.R. Labs, and educated by these scientists, lacked social graces until meeting local boy (and gang leader), Ron Evers.  Vic's mom then encouraged her son to attend public school, where Victor took to athletics, leaving his parents' plans of a scientific career behind.  After being injured in a gang fight, which ended his friendship with Ron, and widened the rift between Victor and his parents, Victor tried to reconcile with his family, only to lose his mother and pieces of his own body as his dad accidentally unleashed a protoplasmic creature during an experiment at S.T.A.R. Labs. 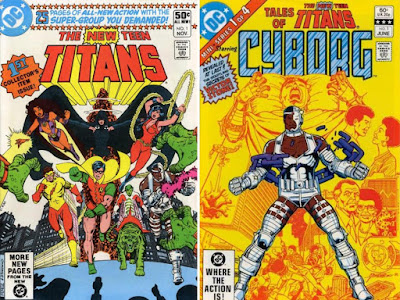 Using the advanced technology available to him, Silas build mechanical parts for his son, making him a cyborg.  After taking some time to adjust to his new body, Victor, having lost his athletic career and girlfriend, found Ron again, and was working with him to attack the United Nations building, but instead stopped Ron (who appeared to die in the attack).

The above relates the original DC Universe origin of Cyborg, as Victor told it in the Tales of the New Teen Titans #1 (June, 1982) by Marv Wolfman, George Perez and Brett Breeding. 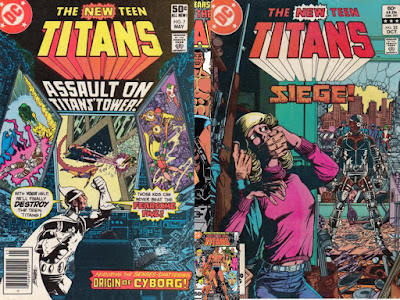 Cyborg found a renewed sense of purpose with the Teen Titans, made up with his father, Silas before his father died (having been poisoned by contact with the protoplasmic creature who killed his wife), with Silas making the T-shaped building on the small island in New York that the Titans would use as their headquarters, the Titans' Tower.  Victor even found some happiness with Sarah Simms, a teacher who worked with kids who had their own prosthetics, who saw Victor as a hero. 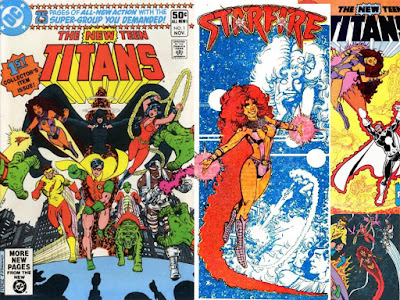 Koriand'r was a space princess, having been born to King Myand'r and Queen Luand'r of Tamaran, but Kori didn't have an easy life.  Hated by her older sister, Komand'r, who didn't possess the native ability of solar flight like all other Tamarans, these royal children had to train to fight like all children did in the Vega system, learning from the Warlords of Okarra.  Training together, the two had a final duel, with Komand'r cheating to try to kill her sister, but nearly ending her own life, only to be saved by Koriand'r.  This defeat so embittered Komand'r, that she betrayed her planet, selling their defense secrets to the reptilian Gordanians, who took over the planet, installing Komand'r as leader, and taking Koriand'r as a slave at her sister's order. 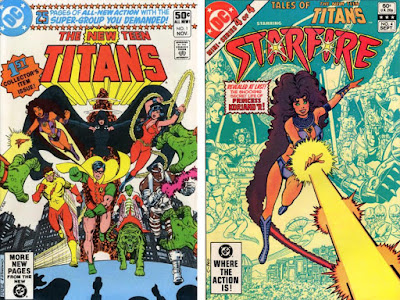 Separated for years, the two sisters met at an ownership transfer that was raided by the Psions, scientists who experimented on other races of the Vegan system, who overloaded the two sisters solar powers, testing their limits, giving them both the additional powers of solar force blasts.

Koriand'r took advantage, and freed them both, only to have Komand'r return Kori to the Gordanians (all revealed in flashback in the Tales of the New Teen Titans #4 of September, 1982, by Wolfman, Perez and Ernie Colon). With her new powers, Kori was able to escape, heading to the planet Earth....and her first meeting with Robin and the rest of the Teen Titans in New Teen Titans #1 (November, 1980). 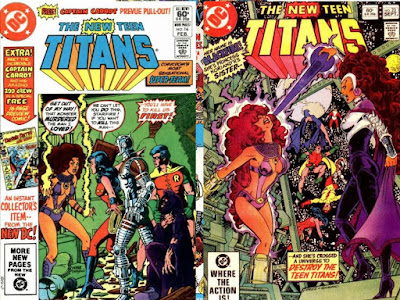 Taking the heroic name Starfire, Kori stayed on Earth to help fight Trigon, then, with the help of Wonder Girl Donna Troy, got a human identity as fashion model Kory Anders, and Starfire loves Dick Grayson, the leader of the Titans known as Robin, who later took on the identity of Nightwing (though she occasionally followed others, as her innocent free spirit led her elsewhere at times).  She even faced her sister again, and with the help of the Teen Titans and the Omega Men (heroes of the Vegan system), freed Tamaran from Komand'r (who would take on the name, Blackfire). 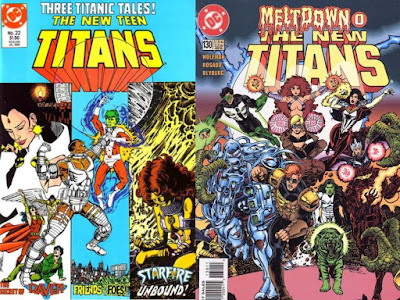 Gar, Raven, Vic and Kori remained the backbone of the Titans for years as Marv Wolfman chronicled their adventures, but changes to each member (including Dick, Wally and Donna) came about because of foes they faced like H.I.V.E., Deathstroke the Terminator, the Fearsome Five, the Brotherhood of Evil, Blackfire, Cheshire and Brother Blood, and before learning more of the future of these Titans, more of these villains has to be revealed as well....but, for now, remember these Titans....Together!
Posted by Dave's Not Here Comic Blog at 4:11 AM