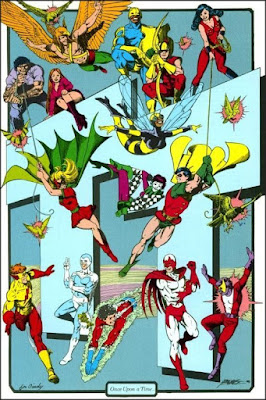 As the original Teen Titans series came to an end, the idea of a second group of Teen Titans came about, the Titans West in Teen Titans #50 to #52 (1978) by Bob Rozakis and Don Heck, with the two teams facing Captain Calamity and Mr. ESPer.

The Titans West group was brought together by Lilith, and included the original Hawk & Dove....as well as two characters with previous histories (though not directly with the Teen Titans....). 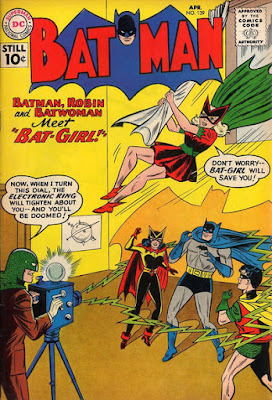 Betty Kane first appeared in Batman #139 (April, 1961) by Bill Finger and Sheldon Moldoff, as the athletically inclined niece of Kathy Kane (who was the original Batwoman), who found out her identity and wanted to be like her aunt, and be the Robin to Kathy's Batman.


Kathy stalled for time, promising the girl she would train her, but Bat-Girl got into action as Batman, Robin and Batwoman were trapped by King Cobra and his gang... 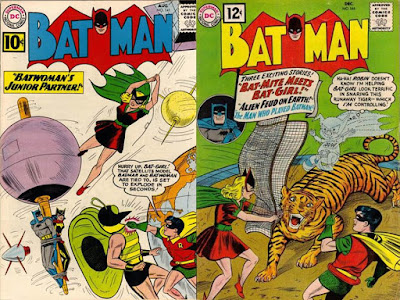 Bat-Girl returned in Batman #141 (August, 1961) as "Batwoman's Junior Partner" by Bill Finger and Sheldon Moldoff, where Robin and Bat-Girl beat the Moth (no relation to the Killer Moth), returned again, with "Bat-Mite Meets Bat-Girl" in Batman #144 (December, 1961) by Bill Finger and Sheldon Moldoff, with Bat-Girl and Robin alone in Gotham, and Bat-Girl professing her love for Robin, and Bat-Mite getting in the middle of the problem (this story being reprinted in Batman From the '30s to the 1970s and the Batman in the Sixties tradepaperback of 1999. 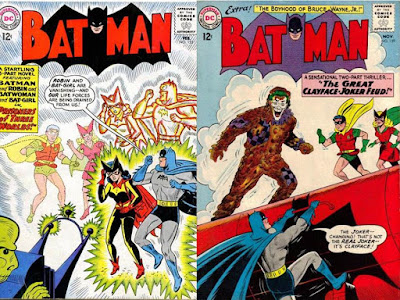 Bat-Girl gets in her first full length story with the "Prisoners of Three Worlds" in Batman #153 (February, 1963, by Bill Finger and Sheldon Moldoff), where Robin and Bat-Girl face aliens, and are sent to the aliens' home dimension, and they have to save Batman and Batwoman (who are sent to another dimension as well, with this story making it into the  Batman From the '30s to the 1970s as well as into the Batman: Greatest Stories Ever Told Volume #2 of 2007.  Bat-Girl finally gets to face some major Batman foes in "The Great Clayface-Joker Feud" in Batman #159 (November, 1963, by Bill Finger and Sheldon Moldoff), helping to catch the Joker, and while getting the shape-changing Clayface, not getting his stash of transmutation chemicals.  This story made it into the Greatest Joker Stories Ever Told of 1989. 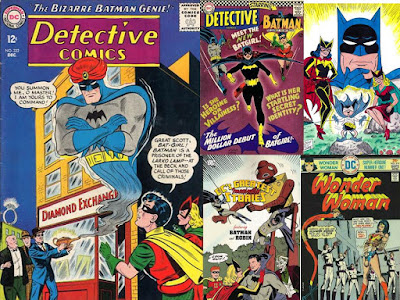 Bat-Girl made it into her only appearance in Detective Comics, Detective Comics #322 (December, 1963) with "The Bizarre Batman Genie" by Dave Wood and Sheldon Moldoff (an odd tale, to be sure, and one not reprinted).  Bat-Girl made an "imaginary appearance" as a grown up Batwoman in Batman #163 (May, 1964, by Bill Finger and Chic Stone) where Dick Grayson was Batman in stories written by Alfred (and these can be found in DC's Greatest Imaginary Stories Volume #2: Batman and Robin of 2010).  Batman comics had started to grow up, abandoning things like aliens, Bat-Mite, Ace the Bat-Hound, and Batwoman and Bat-Girl (though a new Batgirl, Barbara Gordon showed up in Detective Comics #359 of January, 1967, related to Com. Gordon instead of Batwoman), and Betty had faded away, popping up as a tennis player during Wonder Woman's trials in Wonder Woman #219 (August-September, 1975 by Martin Pasko and Curt Swan). 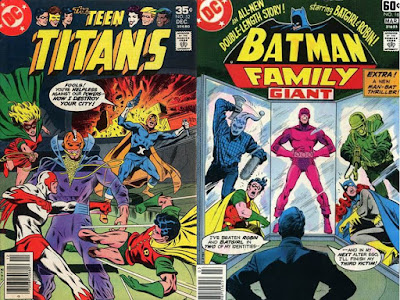 So, when Bob Rozakis needed new teens for a west coast expansion of the Teen Titans, Bette was there (playing tennis no less), getting a chance to reconnect with Robin (fighting for his affections with the Harlequin) in Teen Titans #50 to #52 of 1978, and even continuing that in Batman Family #16 (February-March, 1978, by Bob Rozakis and Don Heck, where Barbara Gordon was also around), before heading to limbo again (only briefly stopping by for Donna Troy's wedding in Tales of the Teen Titans #50 of February, 1985 by Marv Wolfman and George Perez), and her later change into Flamebird (as we'll detail in a later column....). 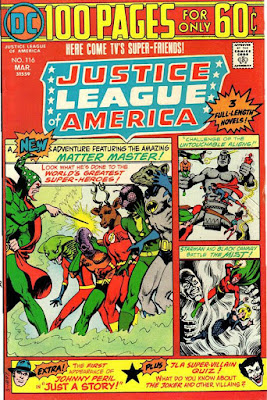 Charley Parker was a slacker, and became the Golden Eagle by accident, as "The Kid Who Won Hawkman's Wings" in Justice League of America #116 (March-April, 1975, by Cary Bates and Dick Dillin), getting wings due to Hawkman foe, Matter Master, and his subconscious desire to defeat Hawkman (but being unable to, because, at the time, Hawkman was back on Thanagar with Hawkgirl due to a plague).


Charley was pretty much left to back to his regular life in Justice League of America #117 (April, 1975, by Elliot S! Maggin and Dick Dillin), as Hawkman returned....(and Charley didn't make either cover, the kid gets no respect!). 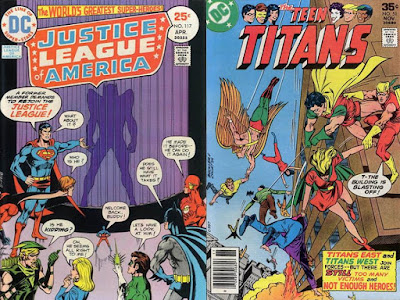 But it appears Hawkman took pity on the kid, giving him a pair of wings so he could continue to fight crime (while being chronically unemployed on the west coast), meeting up with the Teen Titans in Teen Titans #50 to #52 (1978) to briefly be a part of the Titans West, and even popping up for Donna Troy's wedding in Tales of the Teen Titans #50 (February, 1985 by Marv Wolfman and George Perez), before being forgotten in the Crisis On Infinite Earths (and later to get a few different histories, first in Secret Origins Annual #3, along with Bat-Girl/Flamebird, and then later, thanks to the Hawkworld history rewrite). 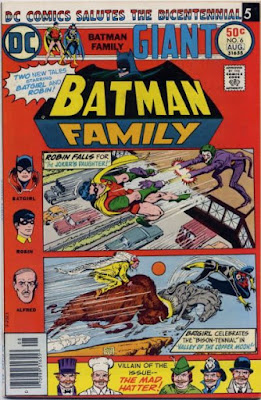 Duela Dent appeared first in Batman Family #6 (July-August, 1976) in a tale by Bob Rozaiks and Irv Novick, wherein the mysterious Joker's Daughter appears, using Joker-like gimmicks to terrorize Robin (but causing no real harm...unlike the real Joker would have done), but her real identity remained a mystery...

....and it would even after the mystery was solved; but let's not get a head of our selves.

The Joker's Daughter would return again, but in a slightly different form.... 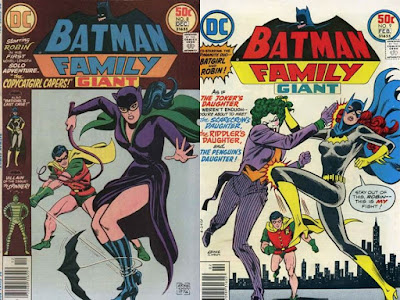 ...facing Robin again in Batman Family #8 (November-December, 1976, by Bob Rozaiks and Irv Novick), but this time as Catgirl (potentially a younger Catwoman), and then in Batman Family #9 (January-February, 1977 by Bob Rozaiks and Irv Novick), wherein Robin gets help, facing Scarecrone (the Scarecrow's daughter), the Riddler's Daughter, and the Penguin's Daughter, where Robin thinks he's solved the "Startling Secret of The Devilish Daughters",  all of whom Robin thinks is Duela Dent (who claims to really be Two-Face's daughter), and she wants to fight crime instead of heroes!

(The Batman Family #9 story was reprinted in the Batgirl: Greatest Stories Ever Told tradepaperback of 2011). 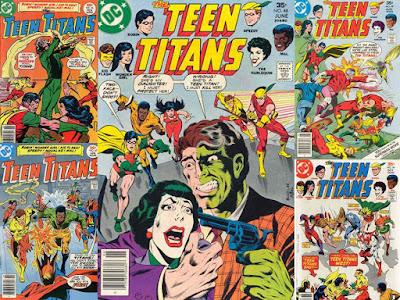 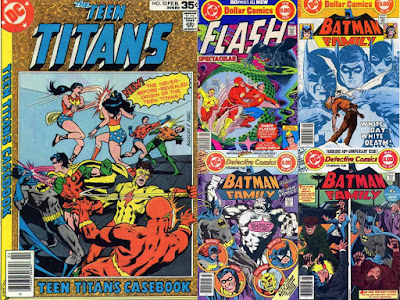 Duela is there for the never before revealed origin of the Teen Titans in their last issue of Teen Titans #53 (February, 1978), follows Robin into Batman Family #16 (February-March, 1978), is one of the Titans present for the graduation of Wally West (Kid Flash) in DC Special Series #11 (1978), and helps Robin in Batman Family #19 (August-September, 1978), then keeps him busy as the Card Queen in Detective Comics #482 and #483 (1979) as the Card Queen, before disappearing for a time (and coming back for Donna Troy's wedding in Tales of the Teen Titans #50 (February, 1985 by Marv Wolfman and George Perez), wherein Dick Grayson confronts her with the fact that she's too old to be Two-Face's daughter!  Duela Dent's story doesn't continue again until well after the Crisis On Infinite Earths, and it is those multiple Earths that help her origin.... 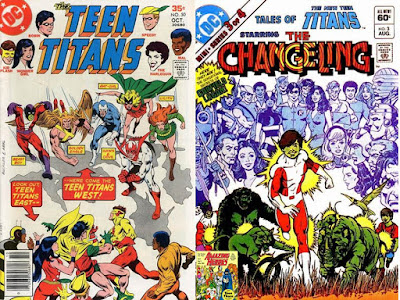 ...and that covers the members of the original Teen Titans (Robin, Aqualad, Kid Flash, Wonder Girl, Speedy, Hawk, Dove, Lilith, Mal, Gnarrk, Harlequin, Bumblebee, Golden Eagle and Bat-Girl), except for one, little Beast Boy (who met the Teen Titans early in his career with the Doom Patrol), and joined the Titans finally during the Titans West time at the urging of Lilith, but little Garfield Logan is more associated with the Teen Titans in his identity of Changeling, with other Titans like Raven, Starfire and Cyborg, so we'll cover him then!