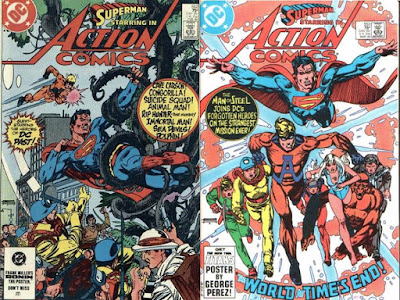 It's rough to be forgotten, and sometimes that even happens to heroes.  Thankfully, while researching DC Comics history, writer Marv Wolfman decided to revive a few of those forgotten heroes with Action Comics #552 (February, 1984, with artist Gil Kane)....

...and here's an opportunity to look into the past of some of these heroes! 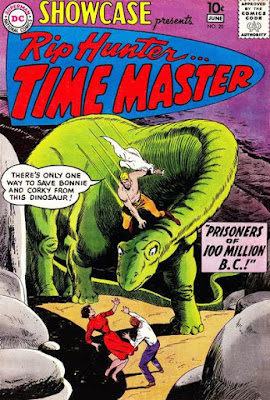 Since time is what usually makes one forgotten, let's start with Rip Hunter, Time Master!  Rip Hunter made his first recorded time trip in Showcase #20 (May-June, 1959) by writer Jack Miller and artist Ruben Moreira, where the inventory of the Time Sphere (Ripley Hunter), and his friend, Jeff Smith, went back to the age of the dinosaurs...

...followed by thieves who used Rip's original Time Sphere and brought along Rip's girlfriend, Bonnie Baxter and her brother, Corky Baxter, and the four almost became "Prisoners of 100 Million B.C.". 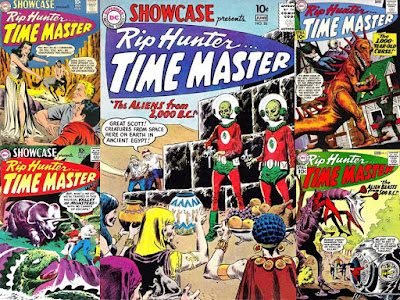 Rip and his crew continued their adventures in Showcase #21 (July-August, 1959, written by Jack Miller and art by Mike Sekowsky), facing Circe and Alexander the Great in the search for the origins of Atlantis, Showcase #25 (March-April, 1960, by Jack Miller and Joe Kubert), with Jeff Smith taking the trip off, and Rip, Bonnie, Corky and a Dr. Senn facing the sorcerer, Cholorus, 1000 years ago (and again facing dinosaurs).  With Showcase #26 (May-June, 1960 by Jack Miller and Joe Kubert), Rip and his companions faced "The Aliens From 2,000 B.C.", as aliens had invaded ancient Egypt!  A formula for success seemed to have been formed with the issues, and Rip and his crew graduated to a regular series with Rip Hunter, Time Master #1 (March-April, 1961, by Jack Miller and Ross Andru), with Rip tracking a friend's history through the 17th, 14th and 10th centuries, while facing a 10th Century sorcerer, Karatan's evil. 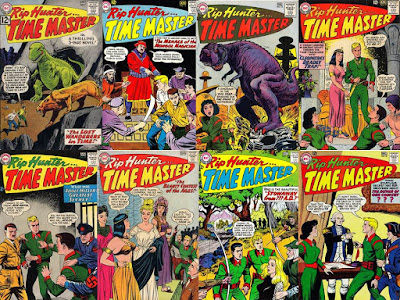 Rip and his crew continued their trips through time, mostly into the past, fighting dinosaurs, aliens, and ignorance, along with meeting a few historical figures along the way... 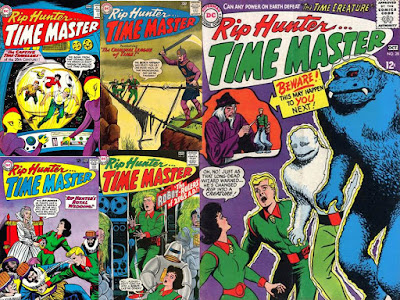 Kraklow would return later as well, as he wouldn't be forgotten... 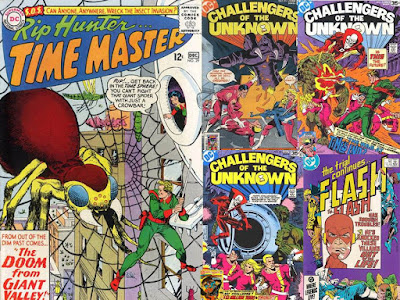 Sadly, Rip's time traveling title ended with Rip Hunter, Time Master #29 (November-December, 1965), but Rip's adventures continued, coming back in Challengers of the Unknown #85 to #87 (in 1978), helping the Justice League and Teen Titans (among others) in Showcase #100 (May, 1978), getting a few more facts of his early tests with Jeff Smith in Justice League of America #144 (July, 1977), finding out that Rip and his crew might have supplied the Time Sphere's original power unit to themselves in DC Comics Presents #37 (September, 1981, by writer Mike Tiefenbacher and artist Alex Sauvik, as part of the "Whatever Happened To...?" series), before popping up in Action Comics #540 (February, 1983, by Marv Wolfman and Gil Kane), setting the stage for the Forgotten Heroes, where most of the rest of Rip's appearances took place (except for a brief spot on the witness stand in Flash #342 of February, 1985) until the Crisis On Infinite Earths. 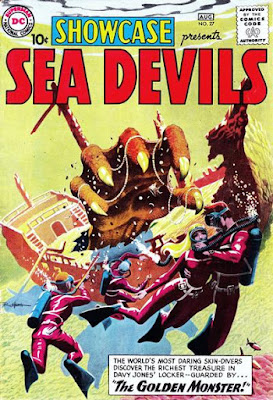 The Sea Devils first swam into comics with Showcase #27 (July-August, 1960, by writer Robert Kanigher and artist Russ Heath), with Dane Dorrance (son of John Payton Dorrance, a wartime frogman), diving on a ship looking for treasure, and meeting aspiring actress, Judy Walton, who was looking to be in a movie called Sea Devils.  The two get into trouble with an octopus, and are rescued by Biff Bailey, another diver.  After that, they encounter a sea monster, and are saved by Judy's younger brother, Nicky, and the team stops the monster with a mine explosion (but also sinks the treasure).

They decide to become a team of undersea explorers and heroes, calling themselves the Sea Devils. 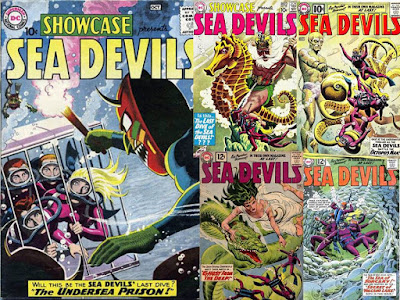 In Showcase #28 (September-October, 1960), Dane's father awards him a pair of prize flippers, and Dane decides to test the rest of his team, giving the most spectacular diver the fins as a prize.  Showcase #29 (November-December, 1960) has two stories, one facing an alien, Horro, whom the team faces in the ocean, and the second tale has them facing off against the Black Mantas (a diving team, no known relation to Aquaman foe, Black Manta).  This series proved popular enough (likely due to the beautiful Russ Heath art) to get its own series, starting with Sea Devils #1 (September-October, 1961), which had them face off with the Octopus Man, Captain Shark and the Emerald Whale. 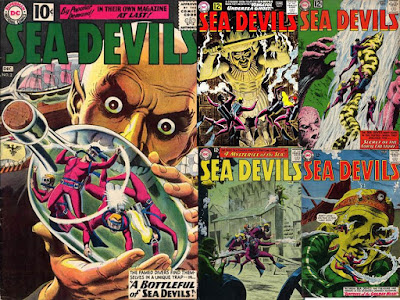 In Sea Devils #2 (November-December, 1961, by Bob Haney and Russ Heath), the team meet Mr. Neptune, a spy with a miniaturization ray, but even small, they are able to defeat him (and he returns later, in DC Comics Presents #77 as Mr. Poseidon), along with their trained seal, Pappy.  The team continues on, fighting various underwater menaces, including aliens like Hroodo and K'Poora, mermen and mermaids, pirates (like Black Shark and Sea Wolf) and mad scientists (like Dr. Deep and Dr. Quad), and even a sentient computer, the Manchine. 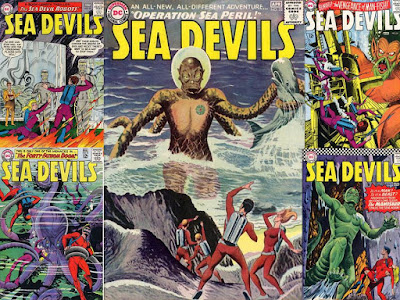 The Sea Devils even have a few regular foes... 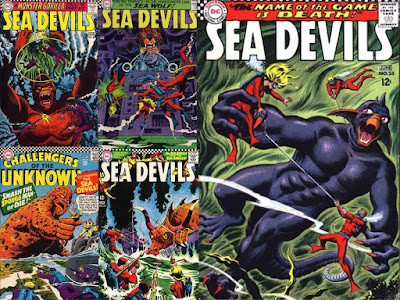 Sadly, sinking sales led to the end of the Sea Devils' title, with Sea Devils #35 (May-June, 1967), but it didn't end the adventures of the Sea Devils.  The team popped up in Showcase #100 (May, 1978) with a bevy of other past Showcase stars (including the Challengers of the Unknown, with whom the Sea Devils guest-starred in issue #51 of the Challengers of the Unknown mag in August-September, 1966, between issues #30 and #31 of their own mag, fighting Challs foe, the Sponge Man), and Judy (now Mrs. Dorrance) hired Christopher Chance (the Human Target) to protect Dane in Detective Comics #486 (October-November, 1979). Dane pops up next in Action Comics #545 (July, 1983, by Marv Wolfman and Gil Kane), where he meets with Rip Hunter and explorer Cave Carson (while Superman fights Brainiac)....which leads to the formation of the Forgotten Heroes. 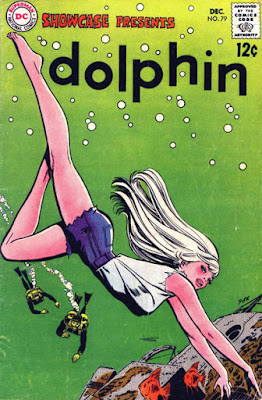 Dolphin was a bit of mystery, starting in Showcase #79 (December, 1968, by writer/artist Jay Scott Pike), where Chief Petty Officer Chris Landau and Seaman First Class Ben Harkey find "The Fantasy at 14 Fathoms", a girl, surviving on a sunken Navy ship.

The divers bring her to the surface, where the girl begins to die...because she has trouble breathing in the air for any length of time because she has gills!

Chris teaches the girl English, and now known as Dolphin, retrieves the paperwork from the wreck and brings it back to the ship, but then leaves for the ocean, not being able to live in Chris' world. 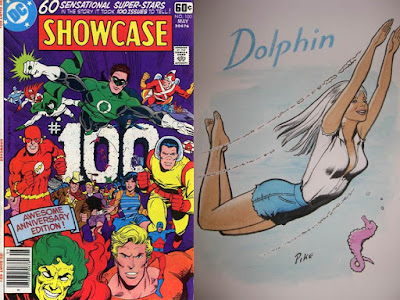 Then, Dolphin had a brief appearance in Showcase #100 (May, 1978, by Paul Kupperberg and Joe Staton), where it was revealed that Aquaman knew of Dolphin, but the Sea Devils didn't (though Aquaman didn't let the readers know what he knew, which wasn't much we later found out)...and Dolphin would have been forgotten, until she was recruited to Rip Hunter's team in Action Comics #552.

Other heroes were recruited to the Forgotten Heroes, so don't forget to check back as we delve into their history soon....