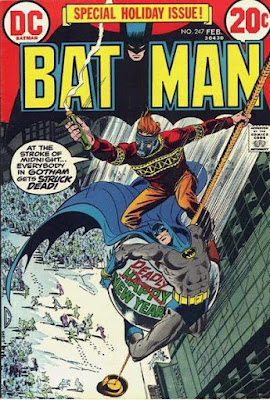 Under a cover by Dick Giordano, where Batman doesn't look like he's going to be enjoying the ball drop on New Year's Eve....

In "Merry Christmas", Batman takes care of a gun-wielding criminal on Christmas Eve, with a little help from a distraction by the Christmas star (and writer Denny O'Neil, penciller Irv Novick and inker Dick Giordano!).

...then, in the second story, "And A Deadly New Year" (by Denny O'Neill and Dick Giordano), Batman and Robin take out a deadly stash of nerve gas to save Gotham, and save the new year on New Year's Eve!