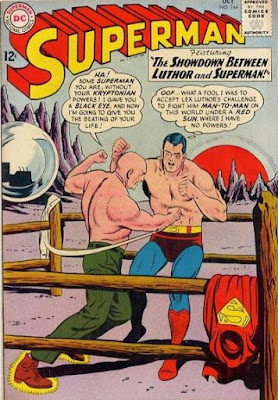 Over the decades, Superman and Lex Luthor have had quite a few battles, but none more exciting than the story from Superman #164 (October, 1963) with "The Showdown Between Luthor and Superman" by Edmond Hamilton, Curt Swan and George Klein!

This little tale had Superman and Luthor facing off under a red sun (thus superman didn't have his powers), so it was a bare-knuckle brawl....that ended with the two becoming separated, and Lex saving the planet's inhabitants (while convincing them Superman was evil).

Luthor was unsuccessful in finding water for the people, and goes back to fighting Superman, but throws the battle, and on their way back to Earth, convinces Superman to redirect water to save the planet's inhabitants, so that while headed back to prison, Luthor feels like a hero. 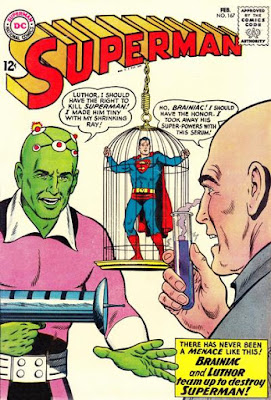 Soon, Luthor teams with Brainiac for the first time (in Superman #167 of February, 1964 by Edmond Hamilton, Curt Swan and George Klein in "The Team of Luthor and Brainiac)...


...where readers and Luthor learn that Brainiac is really a robot, uses his own genius to increase the threat of Brainiac by increasing his intelligence, and then Luthor returns to the planet where he's thought of as a hero, battling with Superman all the while! 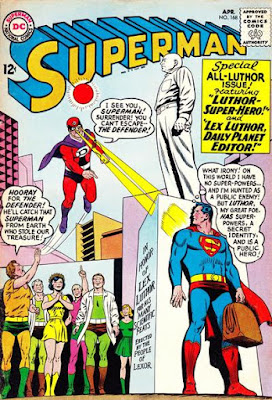 This leads into Luthor's next appearance, in Superman #168 (April, 1964) by Edmond Hamilton, Leo Dorfman, Curt Swan and George Klein, with "Luthor - Super-Hero".


Luthor is on the red sun planet, now named Lexor in his honor, where he spends time as their hero, the Defender (having gotten temporary super-powers), and has to stop Superman who was stealing rare crystals (which, unknown to the Lexorians, were emitting dangerous radiation).


Luthor leaves the planet with Superman to save the Lexorians, including his girlfriend, Ardora.


Wishing to read these classic tales? 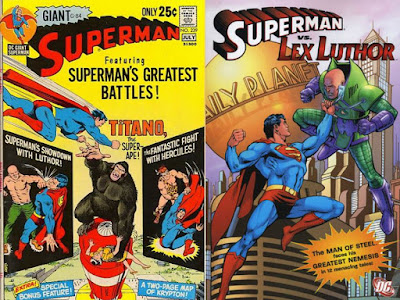 The story from Superman #164 was reprinted in... 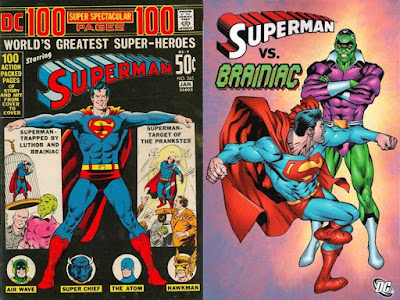 Superman's battle against Luthor and Brainiac from Superman #167 was reprinted in....

Sadly, the story from Superman #168 hasn't been collected anywhere in America....as of yet.  After all, who'd believe Luthor could be the hero?
Posted by Dave's Not Here Comic Blog at 3:54 AM