The Early Days of Man-Bat 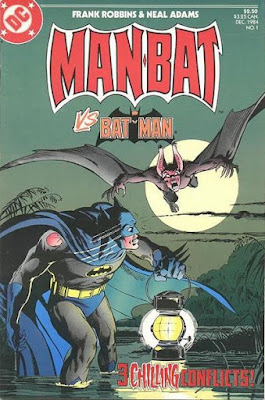 Back in the 1980s, DC Comics gave readers deluxe reprint series, that collected old stories, but on better, high quality Baxter paper, and featured no ads...

...much smaller than tradepaperbacks, yet more focused on a specific purpose.

One of these was 1984's Man-Bat #1, which featured three stories written by Frank Robbins, pencilled by Neal Adams and inked by Dick Giordano...

...featuring the first three stories of Man-Bat, a new, Jekyll and Hyde type of villain for Batman! 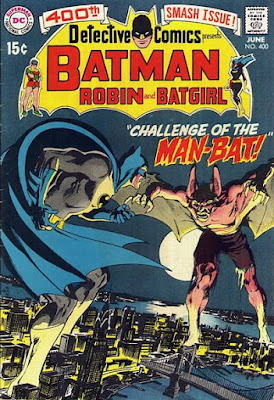 Starting off, Man-Bat first appeared in Detective Comics #400 (June, 1970) in the "Challenge of the Man-Bat", where Gotham Museum of Natural History employee and self-styled bat-scientist Kirk Langstrom tried to give himself super-hearing and night vision by injecting himself with bat-gland extract...


...but, instead, turned himself into a half-man, half-bat creature that ended up facing off against Batman, though the two managed to defeat some crooks who planned to rob the museum, before the transformed Kirk wandered off into the night...


....and into his second appearance! 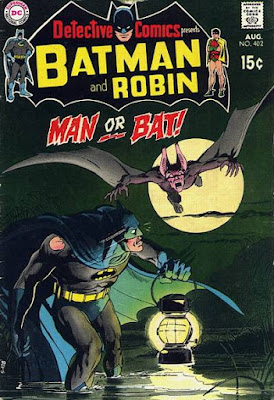 Which was Detective Comics #402 (August, 1970), with the story "Man Or Bat?", where Batman accidentally interferes with Kirk's attempts to cure himself from his bat-transformation...


...and we find out a little more of what drives Kirk Langstrom, by meeting Francine Lee, the woman who was his fiancee!


This Neal Adams' cover also was altered a bit...

....to become the front cover of the collection of this series of three short stories! 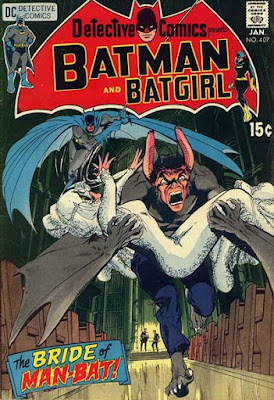 The last of Man-Bat's stories to be collected in this tome was Detective Comics #407 (January, 1971), with the story of "Marriage: Impossible".  In this story, Batman crashes Kirk Langstrom's wedding, trying to prevent the mutated zoologist from marrying Francine Lee, except that the surprise is on Batman, as Francine knew, and had taken some bat-extract herself to become the creature known as She-Bat (though Batman did cure the two of them....).


The wedding was postponed and didn't happen until later.....(and these three stories can also be found in the Batman: Illustrated by Neal Adams Volume #2, both Hardcover and tradepaperback).


But, even though this collected ended with this (and an altered back cover of Detective Comics #416, which was also drawn by Neal Adams), Man-Bat's story didn't end.

More Of The Story 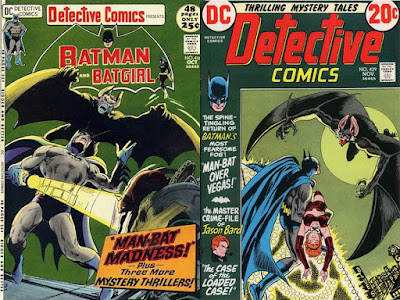 Man-Bat continued on in Detective Comics #416 (October, 1971) written and drawn by Frank Robbins, wherein Kirk married Francine, but also changed back into Man-Bat after, with Batman trying to cure him again, Batman fighting a bat-creature in Las Vegas in Detective Comics #429 (November, 1972), except learning that it was She-Bat from Kirk, who was trying to save her in this Frank Robbins written and illustrated tale. 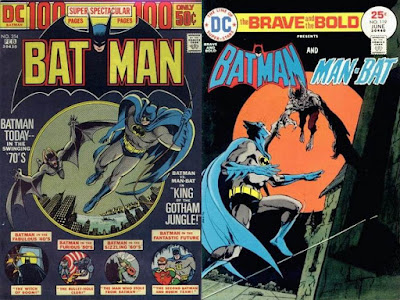 Man-Bat turned the hero in Batman #254 (January-February, 1974) in "King of the Gotham Jungle" written by Frank Robbins, with art by Irv Novick and Dick Giordano, helping Batman bring down the Getaway Genius, and also worked with Batman to help "Bring Back Killer Krag" in Brave and the Bold #119 (June, 1975), by writer Bob Haney and artist Jim Aparo.

All of this led to Man-Bat getting his own series with covers by Jim Aparo! 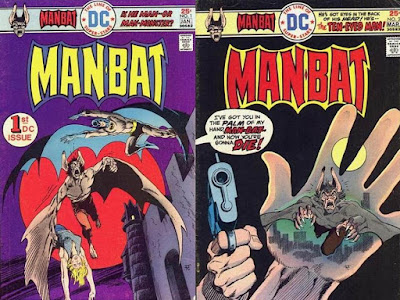 In Man-Bat #1 (December-January, 1975/1976), Kirk had to "Beware The Eyes Of Baron Tyme", a sorcerer who had transformed Francine back into She-Bat and taken control of her in a story by Gerry Conway, with art by Steve Ditko and Al Milgrom, and in Man-Bat #2 (Feburary-March, 1976), Kirk had to be a "Fugitive From Blind Justice", facing off against Batman foe, the Ten-Eyed Man, who got a bit of an upgrade from a secret organization who felt Man-Bat and She-Bat might have been the start of an invasion of bat-people in this story by Martin Pasko, with art by Pablo Marcus and Ricardo Villamonte. 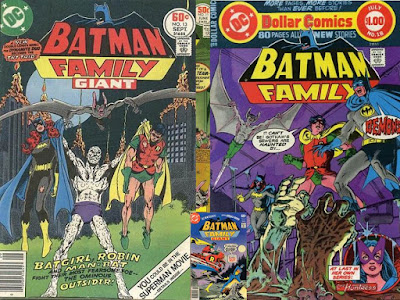 Sadly, the series was quickly cancelled, with Man-Bat getting a back-up in Detective Comics #458 and #459 (in April and May, 1976), and a regular feature in Batman Family in 1977 and 1978, from issues #11 to #20 (including getting his own foe, Snafu, and working with Batgirl and Robin, as well as Etrigan the Demon, and beginning a partnership in a detective agency with Jason Bard, who also had a back-up feature in Detective Comics, with all Batman Family stories written by Bob Rozakis, and art by Marshall Rogers, Don Newton, Howard Chaykin, Michael Golden and Danny Bulandi)... 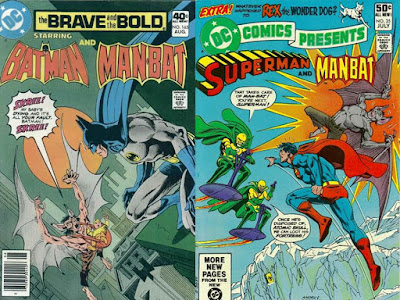 Wouldn't it be great to see a collection of Man-Bat stories, from Detective Comics #400 to DC Comics Presents #35 chronicling his days as a hero?