The Early Life of Vandal Savage 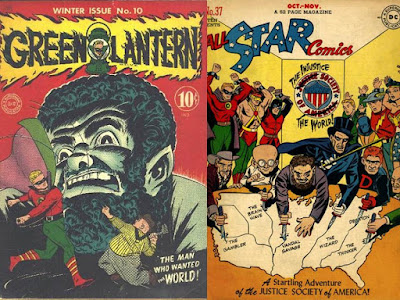 Vandal Savage has been around a long time, not only because he's a caveman who was made immortal by a meteor strike, but he's been appearing in comic books since the days of the 1940s, with two Golden Age appearance, first in Green Lantern #10 (Winter, 1943 by Alfred Bester and Martin Nodell) and then, as a member of the Injustice Society of the World in All-Star Comics #37 (October-November, 1947 by Robert Kanigher and a small army of artists).  One of the claims Vandal Savage made during these appearances is that he caused trouble all over the globe in early eras....so, let's take a look at a few of those troubles! 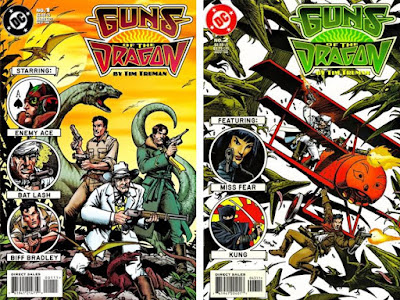 First stop....China, in 1927.  With the four issue mini-series, Guns of the Dragon (October, 1998 to January, 1999, written and drawn by Tim Truman), we see Vandal Savage hanging out on "Dragon Island" (later to be known as Dinosaur Island, starting with Star-Spangled War Stories #90), where he faced off against aging cowboy, Bat Lash (whose wild west adventures started with Showcase #76), German World War I fighting Enemy Ace, Hans Von Hammer (who fought the allies in World War I starting with Our Army At War #151), Biff Bradley (a relative of Slam Bradley, a detective that first appeared back in the original Detective Comics #1). 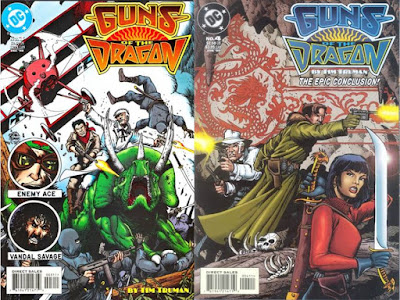 While there, they face Communist forces, as well as Miss Fear (a female fighter pilot who would go on to later face Blackhawk starting with Modern Comics #49) and Kung (a shape-changing soldier who worked with Baron Blitzkrieg, Tsunami and Sumo the Samurai against the All-Star Squadron in World War II, but first appeared fighting Wonder Woman in World War II flashback tales in Wonder Woman #237).

A truly joyous little series for dinosaur fans, fans of cowboy and war comics, and fans of Tim Truman, as well! 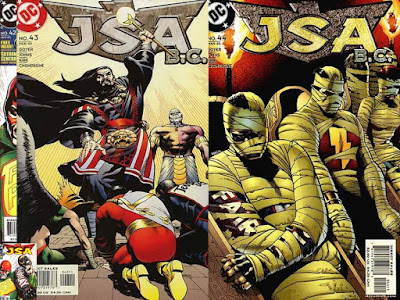 All roads once led to ancient Egypt, and that was never more true than in JSA #42 to #44 (January to March, 2003), when writers David Goyer and Geoff Johns, along with penciller Leonard Kirk and inker Keith Champagne, took the modern day JSA back in time to the Egyptian 15th Dynasty looking for Captain Marvel, but find the Egyptian time Vandal Savage, along with Teth-Adam (the man who would become Black Adam, starting with Marvel Family #1), Nabu the Wise (the mentor who made Kent Nelson into Dr. Fate as of More Fun Comics #55), Ahk-Ton (a priest who used the Orb of Ra to become a Metamorph, and had faced Batman and the Outsiders including Metamorpho first in Batman and the Outsiders #17) and Prince Khufu and Lady Chay-Ara (the lovers who were later destined to be Hawkman and Hawkgirl, starting in Flash Comics #1 for Hawkman,  and Flash Comics #24 and JSA Secret Files #1 for Hawkgirls!). 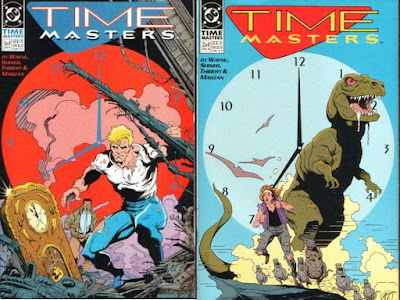 Vandal Savage was very active in the later 20th Century, heading up his own Illumunati group, quietly plotting to control the world, and, over the course of the eight issue Time Masters mini-series of February to September, 1990 by writers Bob Wayne and Lewis Shiner, penciller Art Thibert and inker Jose Marzan Jr., we found out how active Vandal Savage was in the past as well. Fresh off his post-Crisis on Infinite Earths reintroduction in Booster Gold, Rip Hunter began dealing with the problems of time travel (making him a slightly different character than the Rip Hunter who was a member of the Forgotten Heroes), Rip started to recruit his new Time Masters, starting with Bonnie Baxter and Jeffrey Smith, and even dealt with many modern day heroes in quick cameos, including the Metal Men's Doc Magnus, Booster Gold and the Justice League America, Superman, Animal Man and Green Lantern Hal Jordan (and dealt a little with how the Crisis had changed how they travel in time and who they knew as well).

As the series progressed, Rip recruited Bonnie's younger brother (who found out one of the problems of post-Crisis time travel, that it was a one-shot deal), spelunker Cave Carson, Rip's cousin Dan Hunter, petty thief and computer expert Tony (Antonia)....

...and as various people went back in time, they encountered various historical DC characters in the appropriate eras as well. 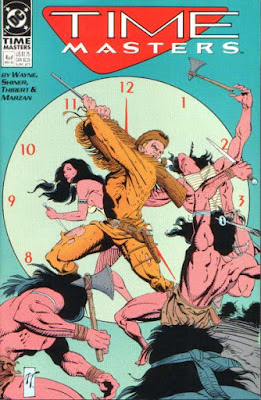 Starting with September, 1874 in Time Masters #3, Jeff Smith encountered scarred Southern Civil War veteran Jonah Hex (who first appeared in All-Star Western #10), Indian garbed lawman Scalphunter (a.k.a. Brian Savage and Ke-Woh-No-Tay, who saddled up first in Weird Western Tales #39), and gambler Bat Lash (earlier in his life, but after having met the previous two, but before leaving the States for China), working against Vandal Savage's plans against the president of the United States.

In 1770, it was Dan Hunter who had come back to that time in Time Masters #4, dealing with Tomahawk (a frontiersman, who had his first comic book adventure in Star-Spangled Comics #69), and plots of Lord Shilling (an English foe of Tomahawk's, who first later appeared in Tomahawk #28), and the early Illuminati plot to replace George Washington with Adam Weishaupt before he became the U.S. President!  This tale also had Dan staying in 1770, to continue to help Tomahawk....(and, as of that first appearance of Tomahawk, he did have a partner named Dan Hunter!). 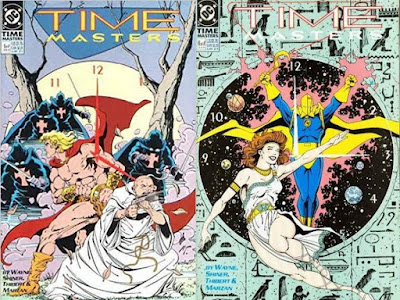 Time Masters #5 had Tony helping Jon the Viking Prince (who began his battle, swinging his sword against the forces of evil with Brave and the Bold #1) against Vandal Savage and his Knights Templar (earlier versions of the Illuminati), back in the days of 980 A.D.

Time Masters #6 saw Bonnie go back to ancient Egypt, helping Nabu (Dr. Fate's mentor) against the Illuminated Ones (the 2578 B.C. version of the Illuminati). 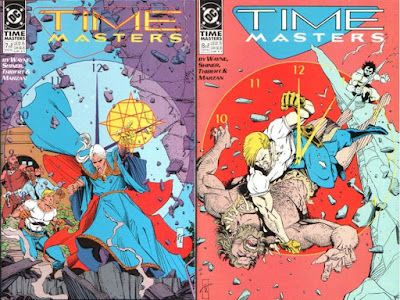 Time Masters #7 saw the crew meeting up with the mage Arion, the Lord of Atlantis (who first appeared back in Warlord #55), dealing with problems in the ancient city and keeping Arion's granddaughter, Kara, safe, as Rip had figured out another two ways to travel in time, allowing him and Jeff to go back, along with Cave Carson....

...and Rip used up his way back in time again in Time Masters #8, where he went back to the time when Vandal Savage was still caveman Vandal Adg, before the meteor hit....and learned some scary truths in the process, while Bonnie used her second chance to go forward and learn of the Illuminati's legacy. 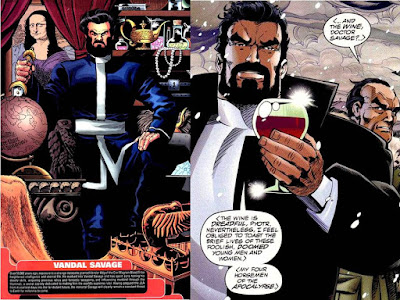 Vandal Savage made many claims on being an important man in history, and, at least as far as these tales show, he was correct! He even was quite a menace to the future of the DC Universe, as Resurrection Man and DC One Million would show, but those are tales of the future....

Posted by Dave's Not Here Comic Blog at 3:45 AM