The Many Lives of Hawkgirl 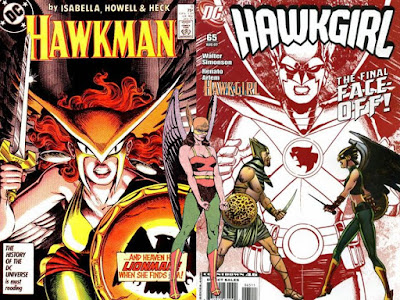 
But, Hawkgirl has undergone many changes over the decades as well, so, here's a quick little summary of the many lives of Hawkgirl! 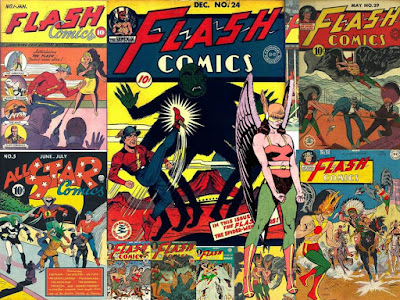 Shiera Sanders had a long history, even before she became Hawkgirl.  Premiering in Flash Comics #1 (January, 1940 by writer Gardner Fox and artist Dennis Neville), Shiera was the reincarnated version of Egyptian priestess, Chay-Ara, who met her eternal love, Prince Khufu in his reincarnated version as Carter Hall.  Shiera ended up being kidnapped by Dr. Anton Hastor, the modern version of the foe of the ancient prince and princess, Hath-Set, which led to Carter becoming Hawkman, using an anti-gravity Nth Metal and ancient weapons to save the girl, and (temporarily) vanquish their foe. 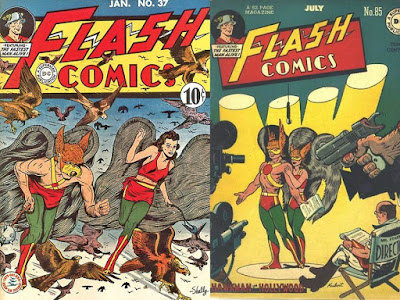 Shiera continued with Carter, eventually donning a costume and wings herself in the Justice Society story of All-Star Comics #5 (June-July, 1941) in a story written by Gardner Fox (but it was more to make villains think she was Hawkman), but Shiera officially became Hawkgirl in Flash Comics #24 (December, 1941 by writer Gardner Fox and artist Sheldon Moldoff)...though, just to add a bit of confusion to this tale, she called herself Hawkwoman in this tale (and this one only). 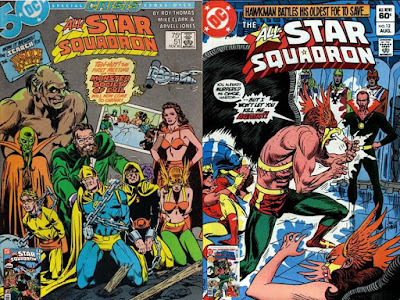 Shiera continued on working with Hawkman in Flash Comics, and occasionally in All-Star Comics (but not being a member of the JSA team in the original run, unlike Carter, who was), though Hawkgirl did join the World War II team of the All-Star Squadron.  Shiera was mostly retired when the JSA returned at the coaxing of the two Flashes (having married Carter Hall and had their son, Hector, sometime between the end of the JSA and their first revival), but Hawkgirl did go into limbo with the JSA (unlike the newest members of Power Girl and the Star-Spangled Kid) soon after the Crisis on Infinite Earths (and was officially a JSA member when she and the rest of the team came back for a brief time in the 1990s).  Sadly, she and her husband, Carter, didn't make it out of Zero Hour....but did, it's complicated....and that tale requires you to meet the rest of the Hawkgirls and Hawkwomen.... 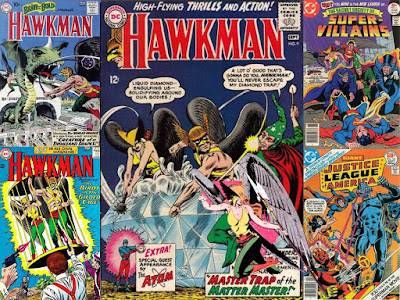 Shayera Hol was introduced to the world in Brave and the Bold #34 (February-March, 1961 by Gardner Fox and Joe Kubert) along with Hawkman as married police officers from the planet Thanagar, looking for fugitive shape-changer Byth, and stayed to learn Earth crime fighting techniques while using her flight, resistance to outer space, technological advances and ancient weapons to fight the new menaces they encountered! 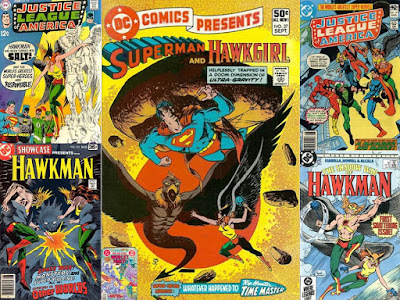 This Hawkgirl also worked with Hawkman exclusively, and even supported his work when he joined the Justice League of America, though it took until Justice League of America #146 (September, 1977) for her to be inducted into the JLA.  Soon after, Hawkman and Hawkgirl got involved in the Rann-Thanagar War (in Showcase #101-103 from June to August, 1978), and that conflict which had the Hawks exiled from their homeworld caused friction between the couple, which also led to Shayera to change her identity from Hawkgirl to Hawkwoman in World's Finest Comics #272 in October, 1981 by Bob Rozakis and Alex Saviuk, though the couple patched things up soon after halting the Rann-Thanagar War (for a time). 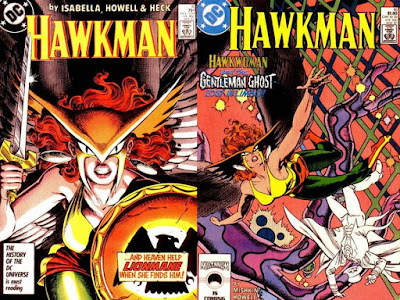 The Thanagarians were more blood thirsty after their war, but raged their war as a more silent, shadow war, which kept the Hawks busy during their 17 issue series in the mid-1980s, and up until they faced two other alien threats to Earth, with the Millennium and Invasion! (along with joining the newest version of the Justice League, the Justice League International, after which they pretty much completely disappeared (this, due to an editorial decision at DC, which led to the newest Hawkwoman, and years of confusion for Hawkman fans!). 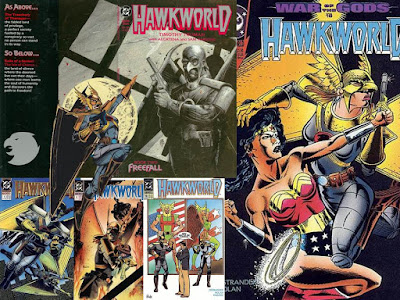 Shayera Thal owes her existence to an accident, and not just the one that killed the original Shayera Thal in Tim Truman's 1989 Hawkworld mini-series (though that wasn't the Silver Age Hawkgirl or  Hawkwoman).  When Hawkworld #1 (June, 1990 by John Ostrander and Graham Nolan) appeared, it was the first appearance of the new Hawkwoman, Shayera Thal (though she was in the mini-series as a civilian, and revealed to be the illegitimate daughter of Chief Wingman Andar Pul), who was a Thanagarian police officer, coming to Earth for the first time, with her single partner, Katar Hol, soon after the events of the Hawkworld mini-series (and yet, after Invasion!), looking for the escaped shape-changer, Byth (who also was coming to Earth for the first time), and using their advanced Thanagarian tech to fight crime (which included flying and blasters). 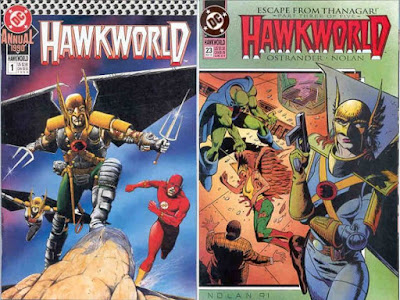 Being new to Earth, Hawkwoman (and Hawkman) had problems with the local heroes (who had just fought Thanagarian Hawkmen in Invasion!), as well as Earth losing its pair of Hawkmen and a Hawkgirl and Hawkwoman (explained as the original Hawkman and Hawkgirl taking the place of the Silver Age pair up to the Crisis on Infinite Earths, then a Thanagarian double agent taking Hawkman's place, recruiting Earth girl, Sharon, as his Hawkwoman, and his wife....see Hawkworld Annual #1 of 1990 and Hawkworld #23 of May, 1992 for the confusing details, including how the Golden Age Hawkman and Hawkgirl seemed to have access to Thanagarian technology). 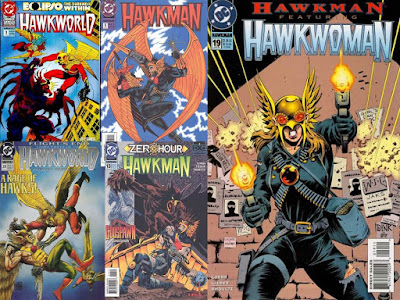 Be that as it may, Shayera Thal was getting use to life on Earth, and being a hero (and slowly getting to like Katar), and even using crossovers like the War of the Gods to make new friends (like Wonder Woman), though some people, like Eclipso, got in her head (during Eclipso: The Darkness Within).  Hawkman and Hawkwoman even got exiled from their Thanagar, coming to stay on Earth as heroes on their own, getting updated costumes....and were fine on Earth, until Zero Hour: Crisis on Time of 1994, where this new Hawkman, the original Hawkman, and the original Hawkgirl all merged (and all of the original Hawkman's past lives got a lot louder in Hawkman's head).  This also made Hawkman the only possessor of the Thanagarian Nth-metal (which allowed the Hawks to fly), so Shayera was left without her wings (and sadly, mostly abandoned by Hawkman).  Hawkman did finally join the Justice League America, eventually disappearing himself soon after Underworld Unleashed and an encounter with Vandal Savage (who took credit for killing many of the original Hawkman's reincarnated selves). 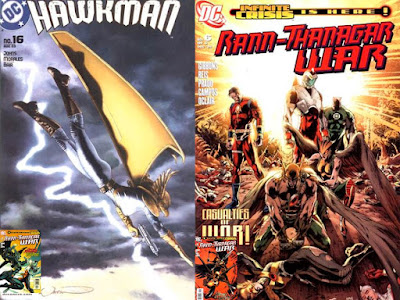 Hawkwoman did return, after the original Hawkman returned, and Shayera also worked with the new Hawkgirl, at least until a new Rann-Thanagarian War, which spelled the end of Shayera Thal Hawkwoman....

....but, more details of that to follow, as we meet the more current Hawkgirl! 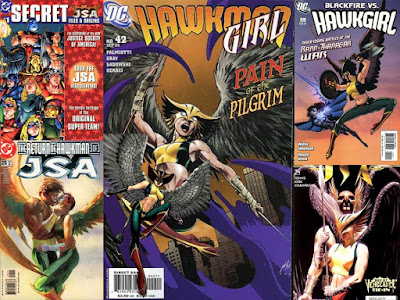 Kendra Saunders was a troubled young girl, so much so that she tried to kill herself, and she was almost successful, but then came back as Hawkgirl!  Premiering in JSA Secret Files #1 (August, 1999, by James Robinson, David Goyer and Scott Benefiel), we learn that Kendra was the granddaughter of Speed Saunders (an adventurer who premiered in Detective Comics #1 of March, 1937)... 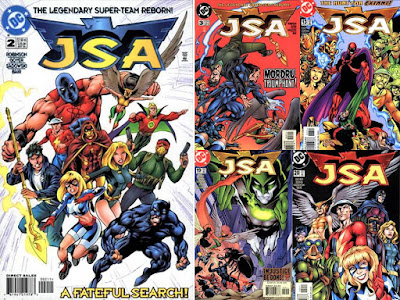 ...and that he saved Kendra (though she did die for a time, and that allowed the soul of Shiera Hall into her body), with Speed realizing what had happened after Kendra awoke in the hospital.  Speed gave her a set of Sheira's old wings, inspiring the young girl to be Hawkgirl.  She soon joined the reforming JSA (which included as members the second Black Canary, Nuklon as Atom-Smasher and the original Flash and Wildcat) as they faced the wizard, Mordru, and continued to distinguish herself as a member of the team, including during the Day of Judgment. 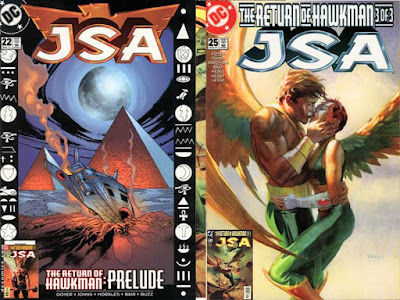 Hawkgirl ended up being taken to Thanagar to face Onimar Synn, who proclaimed himself an eater of souls, who was using the Thanagarian Nth metal to control the population of the planet.  With the help of the current JSA, Hawkgirl frees the people of Thanagar, and helps in the return of the original Hawkman, Carter Hall (who still possesses echos of his previous lives, but not Shiera Hall, nor the Hawkworld Katar Hol, with Carter's return being chronicled in JSA #23 to #25 of 2001 by David Goyer, Geoff Johns, Stephen Sadowski and Michael Bair).  Carter tells Kendra of his and Shiera's eternal love, and keeps trying to convince her they belong together, but Kendra isn't sure, feeling their relationship is more complicated. 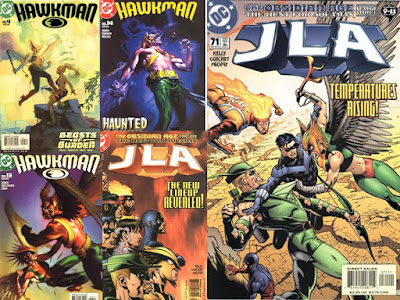 The pair move to St. Roch, Louisiana, following a lead on the death of Kendra's parents, and the Hawks settle there for a time (along the way, discovering more about their past lives and each other, like how old West incarnations Nighthawk and Cinnamon, had met in St. Roch, and we learn that Nighthawk was the one who originally killed Jim Craddock, the Gentleman Ghost.....), joining the Justice League of America at this time (in JLA #71 of early October, 2002, with Green Arrow, Atom, Firestorm, Nightwing and others), as well as fighting Helene Astar (who had killed Silver Scarab a.k.a. Hector Hall son of the original Hawkman and Hawkgirl in Infinity, Inc. #42 to #44, and was thought to be the modern reincarnation of Hath-Set, who faced Silver Scarab, and later, the Hawkworld Hawkman in Hawkman #21 and Hawkman Annual #2), and finding Kendra's parents' killer. 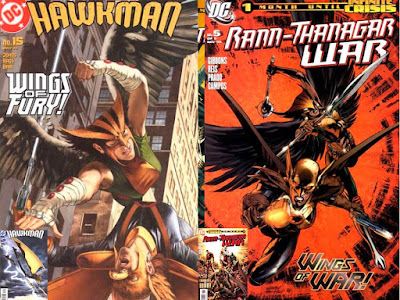 Hawkgirl even met the Hawkworld Hawkwoman in Hawkman #14 thru #17 (June to September, 2003), where Shayera learned that the Katar she loved was dead, with Carter, Kendra, Shayera and Animal Man capturing shape-changer Byth who was loose on Earth again, and then Kendra encountered Shayera again during he Rann-Thanagar War 6 issue mini-series of 2005, where Hawkwoman sadly lost her life, just before the Infinite Crisis, with Kendra and Carter, for a time accepting one another. 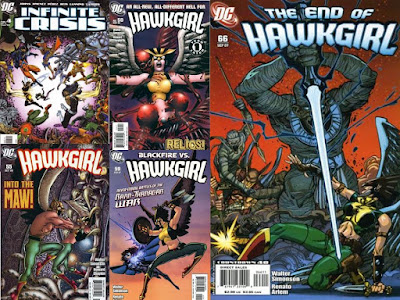 After the Infinite Crisis, Kendra does what no Hawkgirl before her ever did, getting her own title!  Running from Hawkgirl #50 (May, 2006, taking over the numbering of the Hawkman series), and lasting until Hawkgirl #66 (September, 2007), with Hawkgirl finally dealing with Hath-Set, and settling if it was Shiera Hall or Kendra Saunders in charge, letting Kendra be in control of her own life going forward. 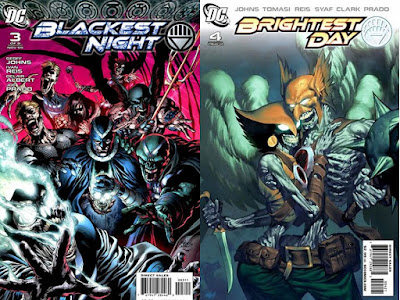 ...but continued to menace the world as an undead Black Lantern through the rest of that eight issue series. 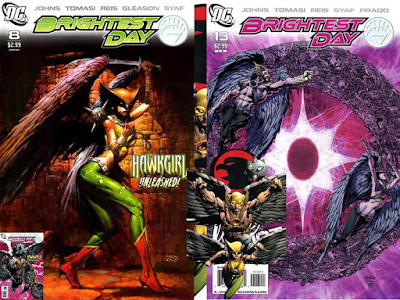 All of this history led to the return of the original Hawkgirl, Shiera Sanders-Hall, in Brightest Day #1 (Early July 2010), finally reunited with her Hawkman, Carter Hall, where they continued to fight for us all, facing off with Hath-Set one last time, as well as Chay-Ara's mother (Queen of Thanagar Khea Taramka, also known as Queen Shrike) and learned how Thanagar had been an influence in the original ancient Egyptian life of Khufu and Chay-Ara, until the DC Universe got a reset with Flashpoint, and we eventually got a new Hawkgirl and Hawkwoman in the New 52. 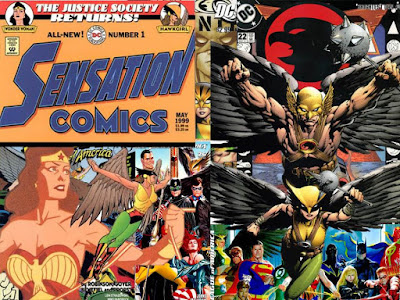 Hawkgirl is a great example of reincarnation and karma..

...truly showing what goes around, comes around, and how true love can be eternal!
Posted by Dave's Not Here Comic Blog at 4:01 AM