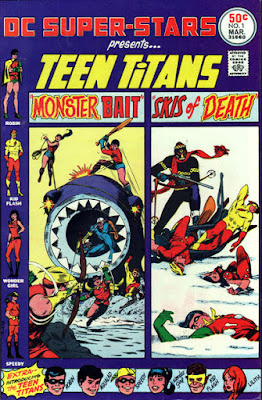 The Teen Titans had been out of print for a few years when DC Super Stars #1 (March, 1976), with its cover made of a couple of past covers of Teen Titans by Nick Cardy gave the kids their first collection of tales...


...but, this was a key issue to the development of the Teen Titans, presenting a few old tales of the team.


Let's set the wayback machine to take a look at the two classic tales reprinted here, as well as a few other surprises that E. Nelson Bridwell's reprint title had in store for readers... 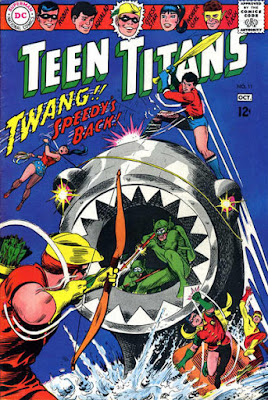 First up, the team was offered up as "Monster Bait" by Bob Haney, Irv Novick and Nick Cardy in a story reprinted from Teen Titans #11 (September-October, 1967), with cover by Cardy.

Occasional member Speedy (Green Arrow's partner, Roy Harper), came to Titans' Lair to convince the team (Robin, Kid Flash, Aqualad and Wonder Girl) to go help Willie Gregson, a young genius who was helping scientist Dr. Simon Finely, as the boy was being menaced by blackmailers using Gregson's dad's criminal past to try to have the lad steal Finely's nerve gas formula.  The five kids took the Titanscopter to the campsite near where the scientist and his team worked, and after enjoying a little time on the water in bathing suits, fought against the scuba diving criminals and their robot monster involved in this nefarious scheme. 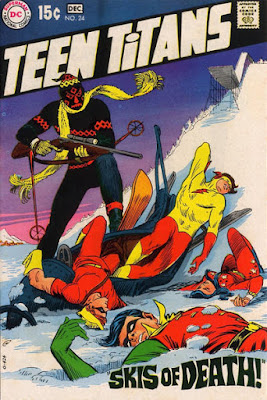 Next up for the team (which was down to four, as Aqualad had taken a leave of absence and Speedy joined full time), time on the slopes facing the "Skis Of Death" by Bob Haney, Gil Kane and Nick Cardy from Teen Titans #24 (November-December, 1969), with Cardy providing the original cover.

Vacationing in their alter egos (after finding out Wonder Girl's origin, name of Donna Troy and near lack of a life), the team went skiing.  Of course, there was trouble at the Medicine Mountain resort.  The Titans came to the aid of ski instructor Eddie Tallbow, to find that developer Anson Larson was trying to force the resort off the land so he could sell it to the government for a hefty profit...and he would have gotten away with it if not for these kids. 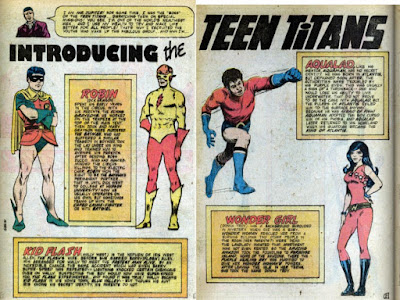 One of the most important parts of this issue was four new pages introduced by Mr. Jupiter (a senior advisor for the Teen Titans for a time), written by E. Nelson Bridwell, with art taken from previous Teen Titans issues for the members), that introduced the team for readers.


Not only Robin, Kid Flash, Aqualad, Wonder Girl and Speedy... 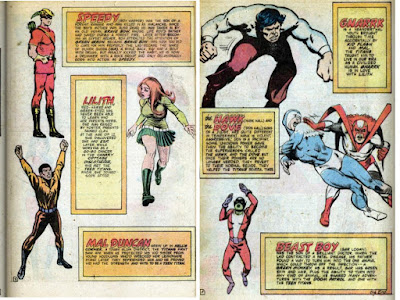 ....but also other members such as brothers Hawk & Dove, telepath Lilith, fix-it-man Mal Duncan, and even caveboy Gnarrk and Doom Patroler Beast Boy....who, at the time of this issue, the last two had only been associates of the team. 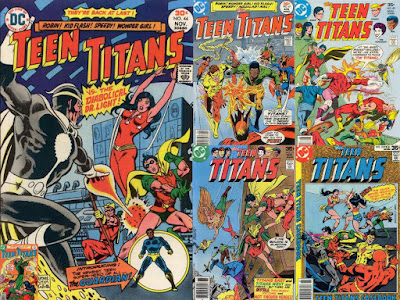 That was due to change, thanks to the successful sales of this issue (as well as Super-Team Family #1, which also had a Teen Titans reprint), leading to the Teen Titans getting a ten issue revival in the mid-1970s, which also featured the introduction of the Titans West and added a few new heroes to the team, like Bumblebee, Joker's Daughter, Bat-Girl and Golden Eagle!

But, bigger things were coming for the Titans after the 1970s ended....
Posted by Dave's Not Here Comic Blog at 3:11 AM