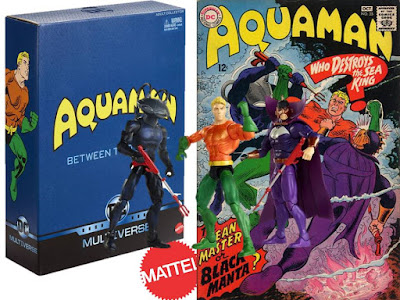 Another July, another round of figures that only are available at the San Diego Comic Con.  2018 is where Mattel gets wet, giving collectors a set of 3 six inch figures as a part of the preparations for the Aquaman movie set to come out in December, with their DC Comics Multiverse Aquaman Between Two Dooms Figures 3-Pack, featuring Aquaman and his two most fearsome foes, Black Manta and Ocean Master, in a package designed to emulate the classic Nick Cardy cover of Aquaman #35 (September-October, 1967), which is the first appearance of Black Manta. 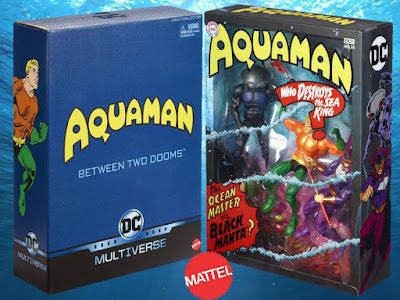 In the depths of the ocean, the King of the Seven Seas must face the firing rage of his two arch enemies: Black Manta and Ocean Master. Both have pledged to bring their wrath upon him. While the waters of the ocean are typically kind to the Sea King and his city, today, they have summoned these two arch foes to battle Aquaman, and each other. For in their thirst for power, there can only be one ruler. A colossal battle begins, unleashing fire from the bottom of the sea. As the clash of these warriors makes the Atlantean water boil, a question rises at this pinnacle moment: Who will destroy the Sea King? The “Sea Jackal” Black Manta or the DREADED Ocean Master? 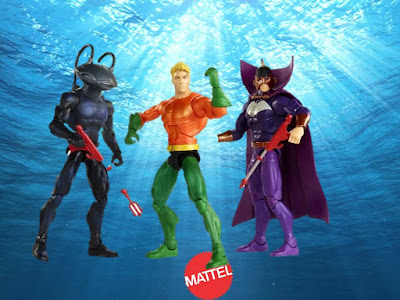 Available for pre-order at the Mattel shop, it seems  to only be available if you have your id, which you would present at the San Diego Comic Con, and then the $60 3-pack would be shipped to you.

One can hope that Mattel wouldn't be a cold fish, and makes this easily available to fans who can't join the schools of fish at SDCC! 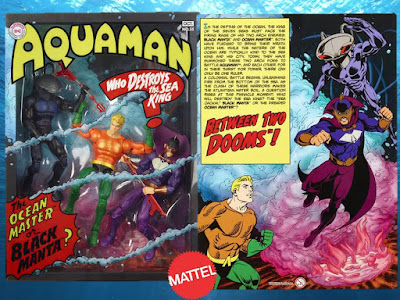 Posted by Dave's Not Here Comic Blog at 4:22 AM