The Original Apocalyptic Kingdom of The Atomic Knights 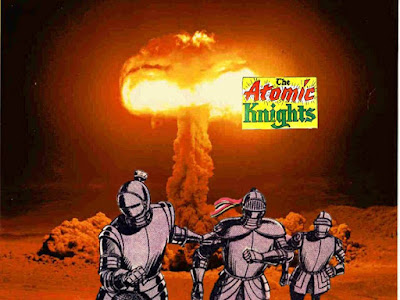 If you are reading this, then the Mayans were wrong, and the world didn’t end with a great disaster in 2012.

It’s also not the first time someone predicted the end of the world and it didn’t happen.

A man goes to sleep…and wakes up in a world devastated by an apocalypse. No, it isn’t Rick Grimes from the Walking Dead, but Sgt. Gardner Grayle from the Atomic Knights! The original post-apocalyptic Kingdom!

After all, the world didn’t end on October 9-29, 1986 with World War III (the Hydrogen War), leaving the Earth devastated, with only lonely scavengers hunting all over the world, looking for canned food, and fighting other groups of survivors, as well as mutated humans…right? 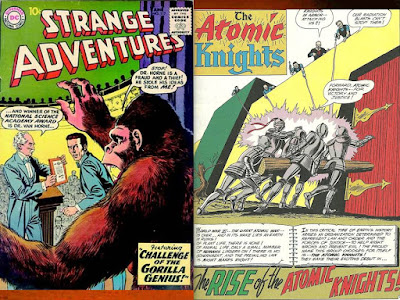 Well, that was the world according to Strange Adventures #117 (June 1960) with “The Rise of the Atomic Knights” (by writer John Broome and artist Murphy Anderson, as all of the original adventures of the Atomic Knights were done by Broome and Anderson). Perfectly average soldier Gardner Grayle found himself in a changed world…destroyed by nuclear bombs, chased by angry mobs, amnesiac to start, and would have to band together with other survivors (like teacher Douglas Herald, scientist Bryndon Smith, soldiers Wayne and Hollis Hobard, and Douglas’ sister Marene) to battle mutated monsters, alien menaces, dwindling supplies and other survivors. In this first adventure, Gardner and Douglas find the six suits of armor that are impervious to radiation and fight with the Black Baron to get the food he has stored and won’t share with others. 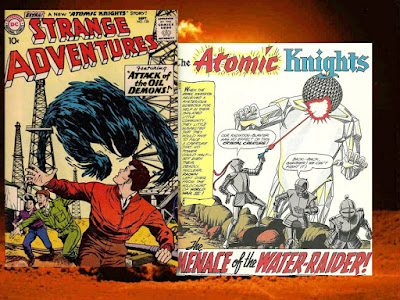 In Strange Adventures #120 (September, 1960), “The Menace of the Water-Raider”, the Knights fight a salt-crystalline creature that is stealing water from local survivors, with a first page splash page that was used later....


....but again, the Atomic Knights don't make the cover of the issue! 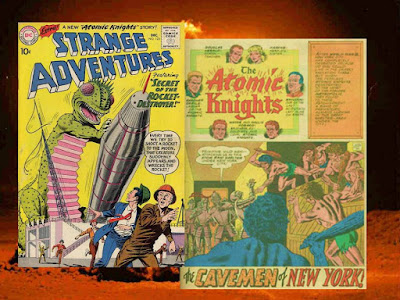 Strange Adventures #123 (December, 1960) has the Knights meet “The Cavemen of New York”, devolved NYC inhabitants, while looking for stored food for their own town of Durvale.

Again, like most of their tales, the Knights aren't on the cover! 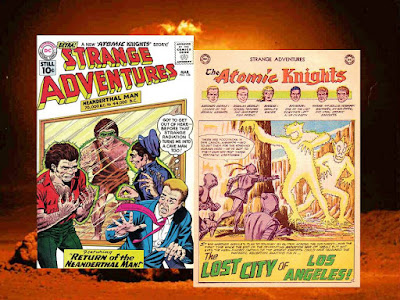 With Strange Adventures #126 (March, 1961), the Atomic Knights go coastal and take gliders out across the vastly changed United States to “The Lost City of Los Angeles”, with the Knights feeling very much in charge of their brave new world...

Still not making a cover appearance! 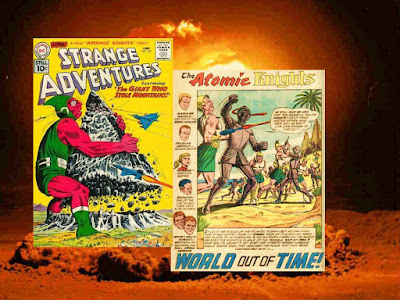 In Strange Adventures #129 (June, 1961), the Knights face ancient Atlanteans who had been transported across the ages into 1990, and face off against their ruler, Khagan (NOT Negan, but still, a relentless opponent), who wants the Knights and their armor to pass through a radiation belt around the Atlantean city in "World Out Of Time". 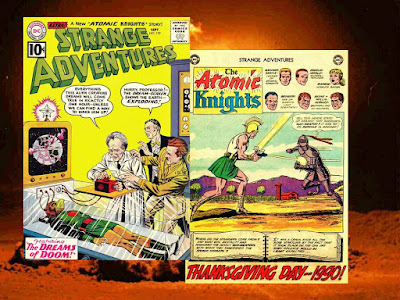 Strange Adventures #132 (September, 1961) celebrates “Thanksgiving Day — 1990″ as the citizens of Durvale celebrate with fresh vegetables grown from seeds gotten from the Atlanteans, and face off against Khagan’s troops, as Khagan and his army continue to cause trouble for the Atomic Knights!

Not making a cover (and one has to wonder how the Earth got so bad....). 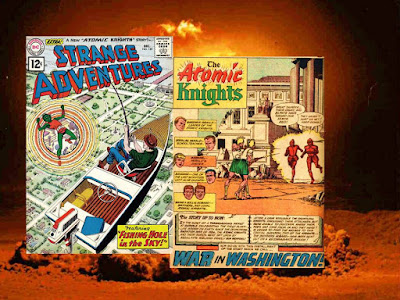 Strange Adventures #135 (January, 1962) sees Khagan plan to destroy Durvale and the Atomic Knights with a weapon the Atlantean got in our nation’s capitol, with a “War In Washington”.  Getting to our nation's capital didn't solve the problems of the Atomic Knights, but was an important adventure for the team, and letting them know where things stood. 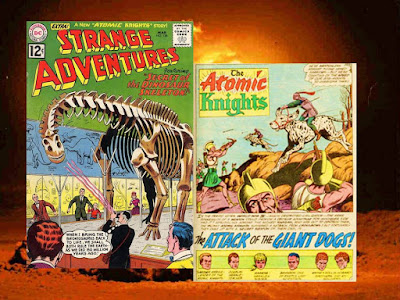 Strange Adventures #138 (March, 1962) has the Knights’ final battle with Khagan and his forces, as the team also gains two giant dalmatians in “The Attack Of The Giant Dogs”.  This also added a change to the series, with the team getting pets/steeds of giant dalmatians; having a distinctive pet is a part of any great Kingdom! 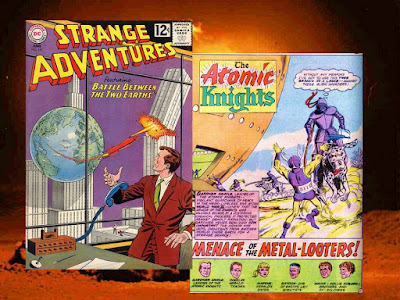 Strange Adventures #141 (June, 1962) sees the Atomic Knights fighting aliens, including Ki-Ling, who want their atomic-proof armor in the “Menace of the Metal-Looters”.


Still, the team didn't make the cover, but that would change soon... 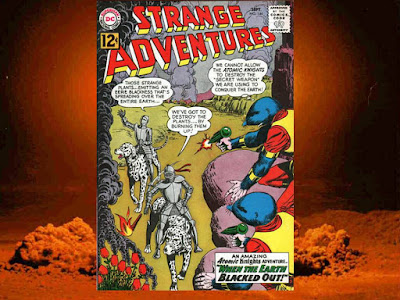 Strange Adventures #144 (September, 1962) features the Atomic Knights in their only original run cover, and reveals the Mole People (and how they started World War III!) “When the Earth Blacked Out”.


It was the Mole People that helped life on Earth, not us (well, humans did help). 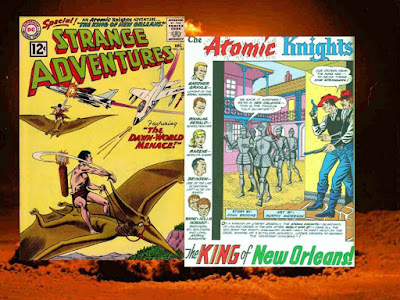 In Strange Adventures #147 (December, 1962), the Knights go to Louisiana and face King Touro and his lack of love for jazz in “The King of New Orleans”.


Seems New Orleans can survive even the Great Disaster! 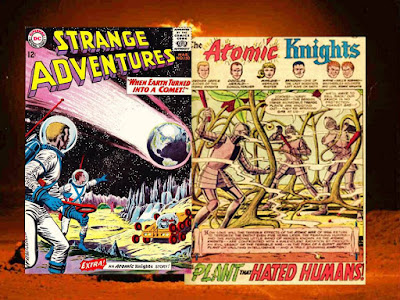 Strange Adventures #150 (March, 1963) see the Knights facing off against mobile mutated flora, and they are a little mad, as they are “The Plant That Hated Humans”.


Seems the world of the future has problems with vegans....as these plants fight back! 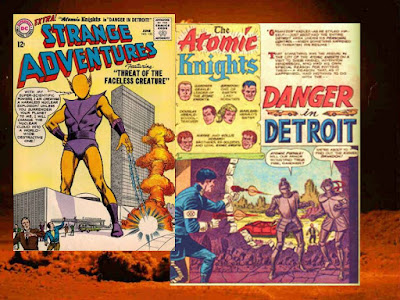 With Strange Adventures #153 (June, 1963), Gardner and his crew being the climb back to civilization (as well as Gardner’s interest in Marene) as they battle organizer Kadey and his Blue Belts trying to get the first new car to roll off the assembly line since the disaster in “Danger In Detroit” (and a cover featuring a future Forgotten Villain, the Faceless Hunter From Saturn!). 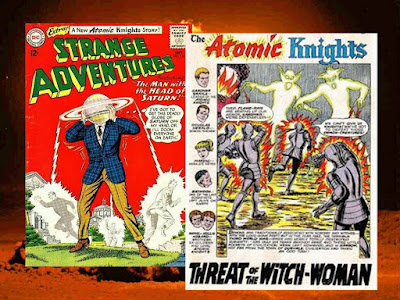 Strange Adventures #156 (September, 1963) see the Knights save a mutated woman from villagers in the “Threat of the Witch-Woman”.

It also felt like the covers were making Saturn responsible for the trouble (though the Atomic Knights didn't crossover with any other features in Strange Adventures at the time). 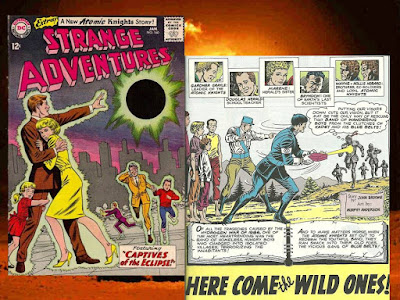 In their last original recorded adventure, Strange Adventures #160 (January, 1964), “Here Come The Wild Ones” the Knights face off against the Wild Ones – a group of youngsters who have abandoned adults...


..and Kadey returns to enact revenge on the Knights, with a new device that can induce trances in others. 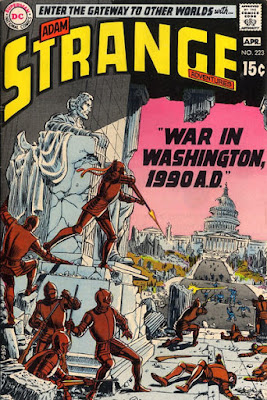 
...the idea that humanity could survive a nuclear war relatively unscathed.


Still, it’s an interesting look back at how people from that era saw the future, and that we have the belief we can survive any danger, so long as we work together.


The adventure didn’t end with Strange Adventures #160, as the Atomic Knights just don't give up!

Return Of The Atomic Knights 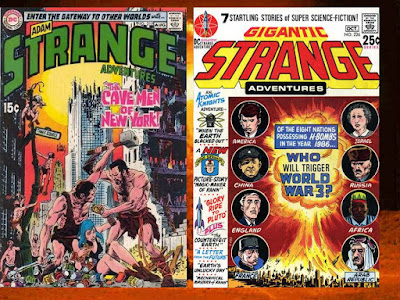 The Atomic Knights had most of their stories reprinted in Strange Adventures #217-231 in the 1970s.
This run supplied them more covers than in their original run, with #219 and #226 relating to the Atomic Knights and drawn by Joe Kubert, and #223 also featuring them, drawn by Murphy Anderson! 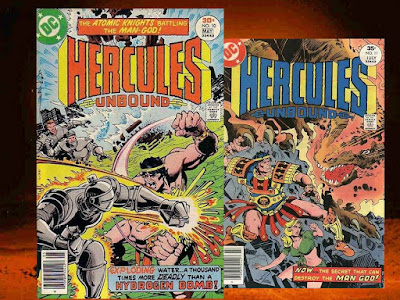 The team even got a couple of new appearances in Hercules Unbound #10-11 in 1977 (by Cary Bates, Walt Simonson and Bob Layton) as their post-apocalyptic world was tied in with that of Hercules (and Kamandi and OMAC as well…

..though there were some inconsistencies as none of these worlds were originally planned to be part of a shared universe).


But, an even bigger disaster befell the Atomic Knights…that of real time. 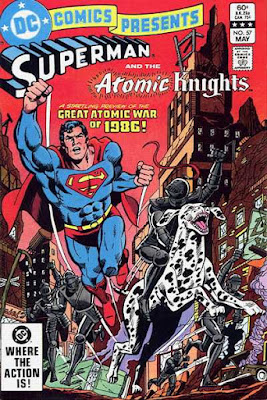 As we approached the 1980s, the threat of nuclear war waned for a time (though it never really went away), and the response to it grew beyond that of fantasy…and much more than the average man (or average soldier) could deal with.

DC Comics Presents #57 (May 1983, by Dan Mishkin, Gary Kohn and Alex Saviuk) had the world of the Atomic Knights revealed to be a hoax…all a computer simulation dreamed up by average soldier, Gardner Grayle, who was trapped in a computer, and almost plunged the world into nuclear war to make his fantasy world come true…


...if not for Superman and Marene Herald (with a little secret about her as well). 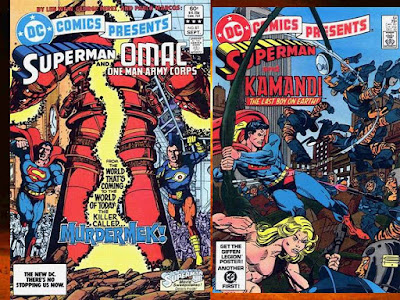 
This also left Gardner Grayle in the here and now, and available for use by others, and they made use of him! 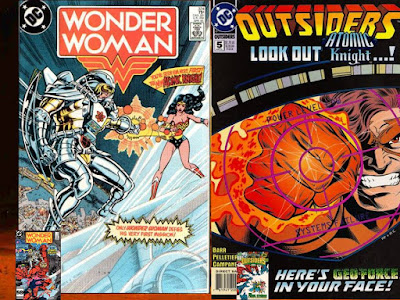 Gardner Grayle stuck around, getting a fancy new suit of armor in Wonder Woman #324-325 in 1985, and the ability of precognition…and he planned on using these abilities to stop the end of civilization. The Atomic Knight worked with the Forgotten Heroes in Crisis on Infinite Earths, and even joined the Outsiders for a time…and reformed the Atomic Knights just after the Infinite Crisis to deal with the Crisis Aftermath: The Battle For Bludhaven. 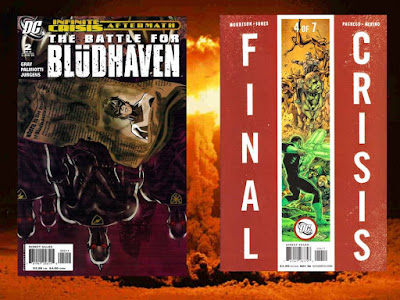 The Knights even appeared in the Final Crisis, and a world that was ravaged by a great disaster (and encompassed OMAC, Kamandi and Hercules Unbound as well),  becoming known as Earth-17, and is still out there somewhere in the DC Universe fighting to keep humanity alive on their own Earth.... 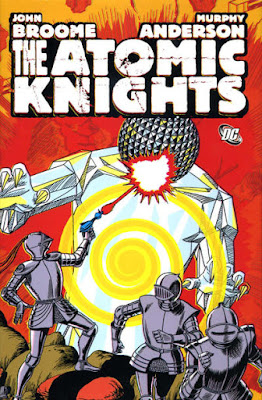 ...with the entire original Strange Adventures run by John Broome and Murphy Anderson being collected in a hardcover graphic novel in 2010….


So, it seems Gardner Grayle and the Atomic Knights are still great survivors, as they have battled a few would be dictators, made it through a few different Crises...


...as well as the Great Disaster!