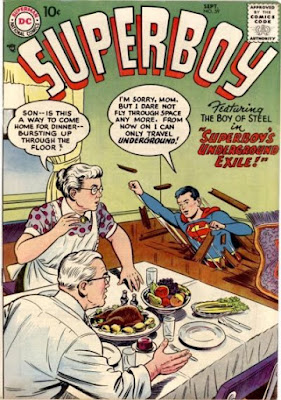 Seems odd for Superboy to spoil a meal, but that's what happened in Superboy #59 (September, 1957) with this cover by Al Plastino.

In the story, "Superboy's Underground Exile", by Otto Binder and Al Plastino, Superboy started to only travel underground after a missile test near Fort Knox.  Soon after, Superboy spends his time searching for gold....and he did this, distracting people into thinking the missile made him radioactive, to replace the gold in Fort Knox, which he accidentally turned to lead (and wanted to prevent a worldwide panic). 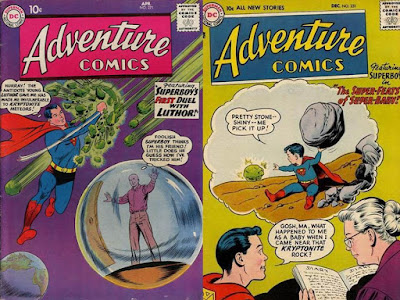 Two other stories in this issue as well, one where Superboy meets an adult Luthor (as "Superboy Meets Amazing Man" by Jerry Coleman and John Sikela) which is contradicted by later stories that place Superman and Luthor at the same age (and it is in Adventure Comics #271 of April, 1960 where the teenage Luthor first turned to crime), and another story, "The Super-Dreams of Superbaby" with art by John Sikela, wherein Superboy has to go to the moon to fix a note he left there back when he was a baby, or risk revealing his identity as Clark Kent!

Such adventures are what we're thankful for!  Happy Thanksgiving!

Posted by Dave's Not Here Comic Blog at 3:19 AM