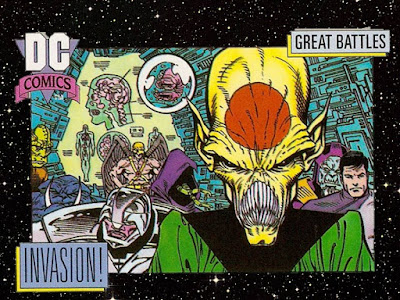 Something to be feared, when coming from beyond our Earth, and DC's heroes dealt with this threat decades ago (and will be dealing with it again on their live action CW shows).

Hard to tell your invaders without a scorecard, so here's a few facts to help you keep the Alien Alliance members straight. 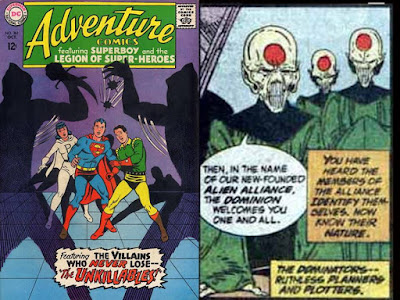 This group first appeared in Adventure Comics #361 (October, 1967), though, it would likely have been the descendants of the one Earth's heroes would face, as the Dominators seen there were in the time of the Legion of the Super-Heroes, one thousand years past the publication date of the issue by Jim Shooter, Curt Swan and Jim Mooney.  The Legion faces the "Unkillables", descendants of some of Earth's most notorious killers like Lee Harvey Oswald, John Wilkes Booth and Brutus, send to menace members of the United Planets by a rogue Dominator.  Usually, the Dominators work in tandem, but, as this shows, sometimes their most dangerous plans come from one member of their race acting out against the others. 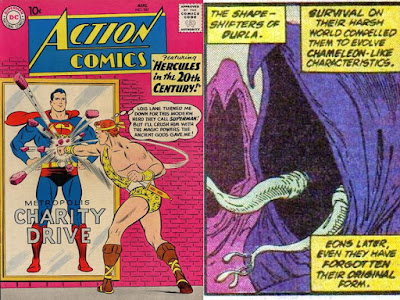 The first Durlan readers see came in Action Comics #267 (August, 1960) by Jerry Siegel and Jim Mooney, as Supergirl tried to join the Legion of the Super-Heroes in the 30th Century, and met other applicants, including Durlan Chameleon Boy.  Cham used a familiar form of an orange humanoid with pointed ears and antennae, used by many Durlans in the 30th Century, but in the 20th Century, at the time of Invasion!, members were a little looser, obscuring their forms....as their shape-shifting came about due to a devastating war on their homeworld. 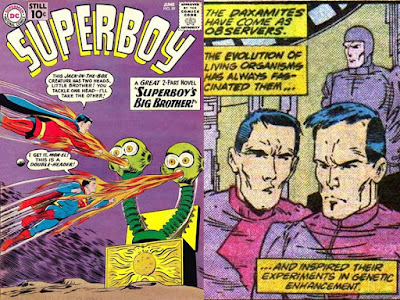 The first time a Daxamite appeared was in Superboy #89 (June, 1961) by Robert Bernstein and George Papp, and this was when Mon-El met Superboy (just a little before the current age of heroes, as Superboy was Superman, as a boy, learning to deal with his powers in Smallville).  Daxamites have powers similar to Kryptonians (flight, super-strength, invulnerability, vision powers), but without the weakness to Kryptonite.  Instead, their weakness is common lead, and it is fatal to any Daxamite who is exposed to it. 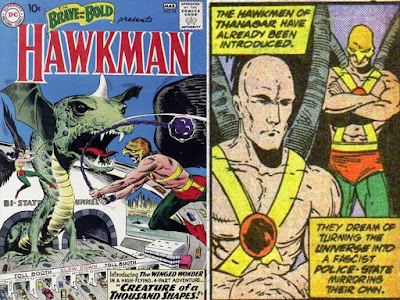 Thanagarians lived on a planet with an advanced police force, as revealed in their first appearance in Brave and the Bold #34 (February-March, 1961) by Gardner Fox and Joe Kubert.  At that time, police officers Katar and Shayera Hol came to Earth to track down a criminal, and stayed to learn Earth police techniques.  Various invasions and tyrannical rulers of Thanagar have taken it's toll on its people, and the once proud Nth metal winged Hawkmen symbol of law and order had turned into flying fascists, bent on controlling other races (though as Hawkgirl can attest, their history gets confusing sometimes). 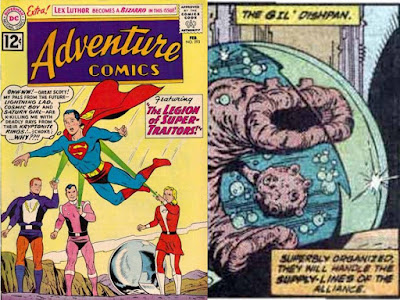 The Gil'Dishpan really first appeared in Adventure Comics #293 (February, 1962) as the Brain Globes of Rambat, attacking Superboy in his home of Smallville in a story by Jerry Siegel, Curt Swan and George Klein, with a more formal introduction in Legion of Super-Heroes #307 (January, 1984) by Paul Levitz, Keith Giffen and Larry Mahlstedt.  As the Brain Globes, they turned Superboy's friends, the Legion of Super-Heroes, against him, and were instrumental in the formation of the Legion of Super-Pets (Krypto the Super-Dog, Streaky the Super-Cat, Beppo the Super-Monkey and Comet the Super-Horse), while, later, in the 30th Century, members of their race usually were involved in nefarious actions, and keeping things flowing smoothly, as they were not of much use in physical confrontations, needing to be confined to their globes. 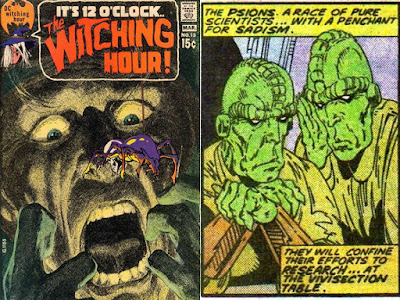 Originally briefly glimpsed in Witching Hour #13 (February-March, 1971) by Alan Gold, Marv Wolfman and Gray Morrow, the Psions were scientists, that like to experiment (and they considered every other race inferior, and useful only as experiment subjects).  They lived in the Vegan system (home of the Omega Men, and a zone that the Guardians of the Universe had barred Green Lanterns from).  The Psions were also instrumental in enhancing the solar powers of New Teen Titan, Starfire, and her sister, Blackfire, as the sisters escaped one of their solar based experiments. 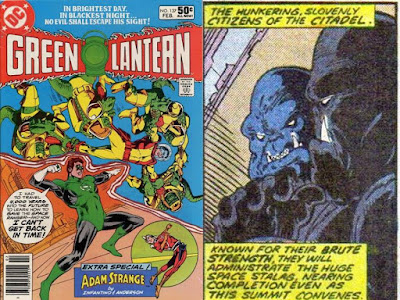 The Citadel first were mentioned in Green Lantern #137 (February, 1981) by Marv Wolfman and Joe Staton, and these hulking aliens were leaders of evil empire which ran the Vegan system, being the brutish forces that the alliance of the Omega Men fought against, though harboring a secret of their own, that of being a race of clones. 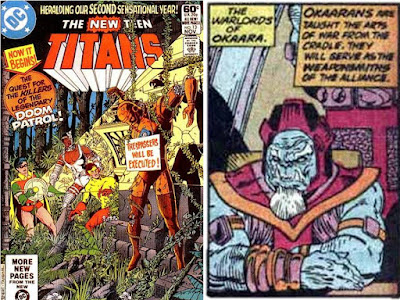 The Warlords of Okaara were a fierce warrior race (thus, the name), and the earliest mention of them came about in New Teen Titans #13 (November, 1981) by Marv Wolfman, George Perez and Romeo Tanghal.  They trained many of the ruling class of the worlds of the Vegan system, including the children who would grow up to be Primus and Kalista of the Omega Men, and Starfire and Blackfire. 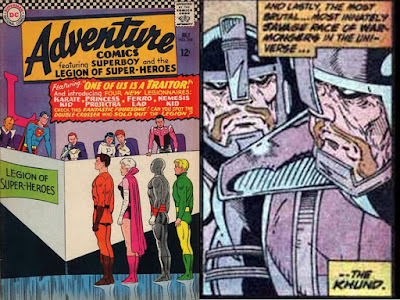 But, no race in the galaxy were as savage of the Khunds, introduced in Adventure Comics #346 (July, 1966) by Jim Shooter and Sheldon Moldoff.  True, that was the 30th Century version of this race, which gave the Legion of Super-Heroes one of its most serious traitors in their mist, as well as introducing new Legion members of Karate Kid, Princess Projectra, Ferro Lad and Nemesis Kid...but they were just as ferocious in our time as they would be in the future.  The Khunds were a race devoted to war, brutal in their dealings with all other peoples. 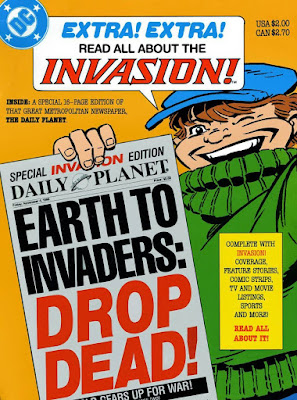 These were the forces aligned against Earth in Invasion! #1 (1988) by Keith Giffen, Bill Mantlo and Todd McFarlane, as well as the second and third issue of that mini-series (and quite a few crossover issues at the time).


Earth's response to the alien Invasion.....and check back for a little more Invasion! coverage coming soon!
Posted by Dave's Not Here Comic Blog at 4:16 AM