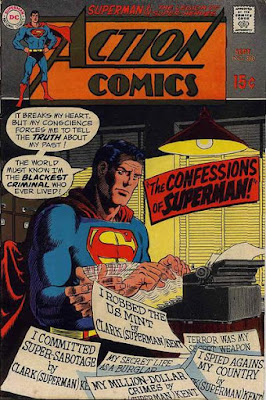 One often forgets about one of Superman's greatest powers....that of the power of the press, in his other identity as Clark Kent.  The cover of Action Comics #380 (September, 1969) by Curt Swan and Murphy Anderson shows Superman using that power....

...though the story inside, "The Confessions Of Superman" by Leo Dorfman, Curt Swan and George Roussos, does have Superman doing this, it is because he thought he committed crimes, and was confessing to them.  He thought he willingly did these heinous actions, as he had Supergirl test him for Red Kryptonite exposure (which makes Kryptonians due odd things for 48 hours), but the tests came back negative (because it was a member of the Superman Revenge Squad, lying to Superman....).

Superman planned punishing himself with exposure to Gold Kryptonite (which permanently removes a Kryptonian's powers)..... 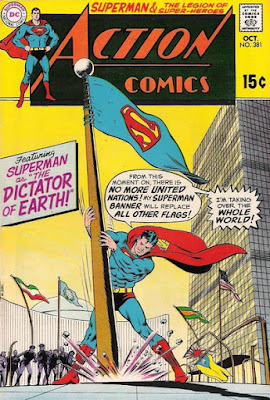 ....with that story resolving in Action Comics #381 (October, 1969) with a cover by Swan/Anderson and story by Dorfman, Swan and Roussos, with Superman as "The Dictator Of Earth".  Instead of exposing himself to Gold K, Superman decides to take over the world!  As he is doing this, Superman comes out of his Red K haze, and allows himself to be put on trial by the United Nations for his misdeeds.  The Revenge Squad watches, gloating, and Superman tunes in on their actions, proving his innocence (his plan, as he figured out what they were doing when he headed back to his Fortress, pretending he was going to expose himself to Gold K).

All of which proves the power of the press, and the need to use it wisely.
Posted by Dave's Not Here Comic Blog at 4:01 AM