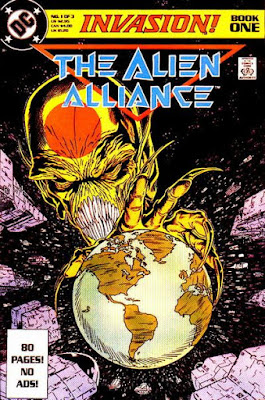 Invasion! was a three issue mini series in 1988, by Keith Giffen, Bill Mantlo, Todd McFarlane, P. Craig Russell, Al Gordon, Josef Rubinstein, Tom Christopher, and Bart Sears, covering a gathering of the Alien Alliance (headed by the Dominators) to unite against the heroes of Earth.

The first issue was devoted entirely to the Alien Alliance, and the kidnapping of humans from Earth to be tested for a genetic anomaly....which some people on Earth were found to have, that allowed them to manifest super human abilities when hit with extreme stress or danger.

This first issue set the stage for First Strike and Aftermath (the second and third issues of the series), as well as the two issues of individual titles of the heroes of the DC Universe, some of which are detailed below. 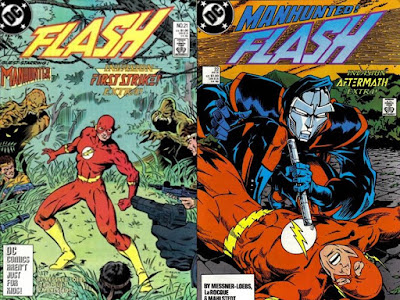 The Flash of Invasion! was Wally West, who, being Kid Flash until the supposed death of his mentor, Barry Allen, fought on as the Flash.  Flash fought the Durlans (shape-changing aliens) in Cuba, where his father (Rudolph West) was also hiding in Flash #21 (1988), and Flash #22 (January, 1989), in issues by William Messner-Loebs, Greg LaRocque and Larry Mahlstedt, and Flash also worked with the Manhunter. 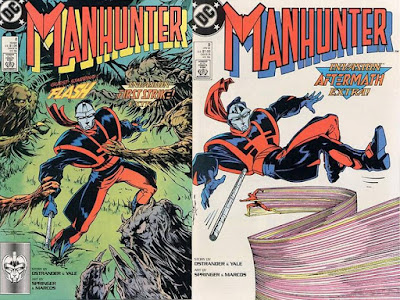 Manhunter was a man named Mark Shaw, who worked for the Manhunters (precursors to the Green Lantern Corps), but turned against them, and became a bounty hunter of super-villains.  Manhunter was paid by Wally's mom to go down to Cuba to help Wally (thus he also ended up fighting the Durlans as well, using his training and energy baton) in issues of Manhunter #8 (Holiday 1988) and #9 (January, 1989) by Kim Yale, John Ostrander, Frank Springer and Pablo Marcos, in tales intertwined with those of Flash and Invasion! 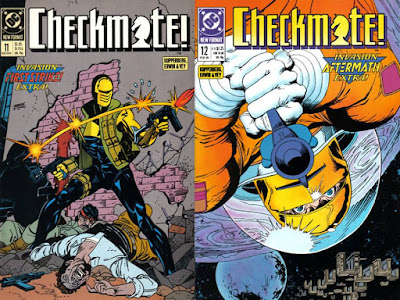 Ordinary men had to step up during the Invasion, and the knights of the secret government organization, Checkmate! were as likely as any to do the job.  Checkmate #11 (Holiday, 1988) dealt with humans working with the aliens to unseat the government in England, while Checkmate #12 (February, 1989) dealt with the knights keeping Cape Canaveral safe (and dealing with the Dominators last assault on mankind) in two stories by Paul Kupperberg, Steve Erwin and Al Vey. 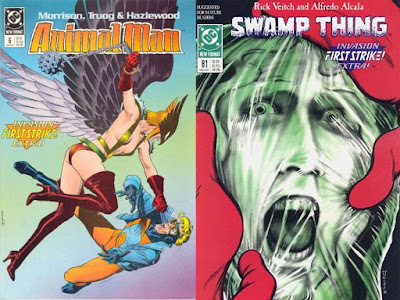 Animal Man (the man with animal powers) and Swamp Thing (a powerful Earth Elemental both got a little involvement in the battle.  In Animal Man #6 (Holiday 1988 by Grant Morrison, Chas Troug and Doug Hazlewood), Buddy Baker (a.k.a Animal Man) faced off against a Thanagarian warrior and artist, with a little help from Hawkman, while Swamp Thing #81 (Holiday, 1988, by Rick Veitch and Alfredo Alcala) didn't have Swamp Thing in it (as the Dominators sent him away the issue before, fearing their plant-based technology would be vulnerable to a plant elemental), and this issue dealt with his wife, Abby Cable, dealing with a widowed alien. 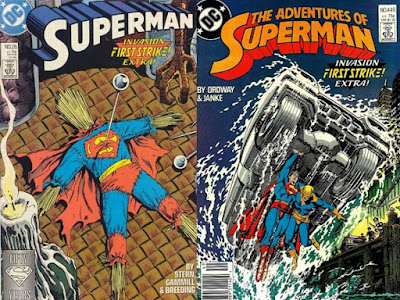 Superman had two monthly titles at this time, so we deal with the First Strike issues of his here.  In Superman #26 (1988 by Roger Stern, Kerry Gammill and Brett Breeding), Superman dealt with the supernatural menace of Baron Sunday, as well as attacks by the Thanagarians and the machinations of Luthor and Brainiac, with Captain Atom looking for Superman, but only finding the Guardian (and a new Gangbuster emerging to help people in Metropolis as well).  In Adventures of Superman #449 (1988, by Jerry Ordway and Dennis Janke), Guardian fights Gangbuster while looking for Superman, finding the man of steel but losing Gangbuster.  Jimmy Olsen helps out, getting Superman to Captain Atom, and leading him to meet with the Dominators (and leading into Invasion! #2). 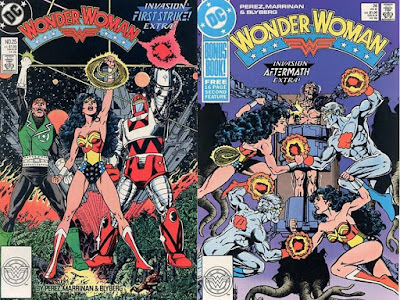 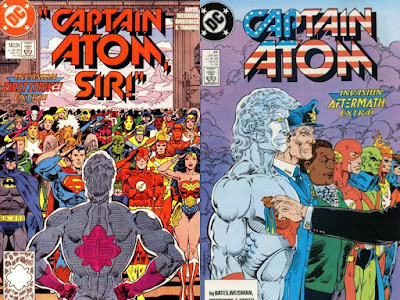 Nuclear powered hero wrapped in an alien metal shell, Captain Atom, is recruited by the U.S. government to head up the response to the aliens in Captain Atom #24 (1988, by Cary Bates, Greg Weisman, Pat Broderick and Romeo Tanghal), with the JLI's Maxwell Lord, the Suicide Squad's Amanda Waller and General Wale Eiling (secretly of the Captain Atom Project), and they find a Durlan spy disguised as Steve Trevor in their midst (leading back into Invasion! and the later Wonder Woman story).  In Captain Atom #25 (January, 1989, by Bates, Weisman, Broderick and Robert Smith), the heroes celebrate what they thought was a victory until situation change (leading into Invasion! #3). 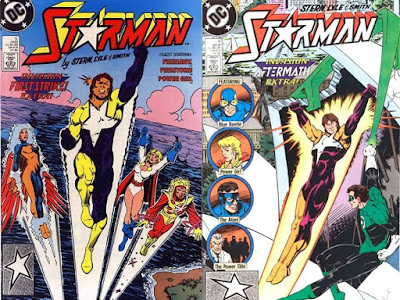 Will Payton was a man struck by a beam from outer space, allowing him to control his density, fly and limited shape-change, which he used to become the hero, Starman.  Dealing with a group of powered people called the Power Elite, Starman is recruited into the Invasion in Starman #5 (Holiday, 1988 by Roger Stern, Tom Lyle and Robert Smith), after being kidnapped by a Durlan, and then fighting Khunds with Firestorm, Firehawk and Power Girl.  Then, after Invasion! #2, in Starman #6 (January, 1989 by Stern, Lyle and Smith), Will is part of clean-up duty across the world, along with Green Lantern, Atom, Power Girl and Blue Beetle, and runs into the Power Elite again as time for Earth runs out.... 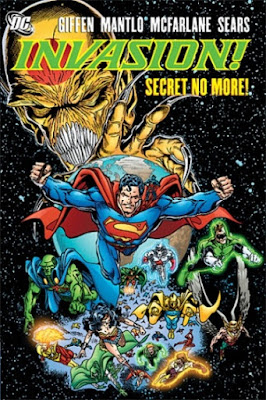 ...and the 3 issue mini-series is collected in tradepaperback, with Animal Man's issue in the Animal Man TPB of 1991, Swamp Thing in Swamp Thing: Infernal Triangles TPB of 2007, and the Superman tales would make it into a Superman: The Man of Steel Volume 11 (if there is to be one), and the Wonder Woman issues would be in the second Wonder Woman by George Perez Omnibus due out in 2017, with the rest of the tales presented here needing collection.....