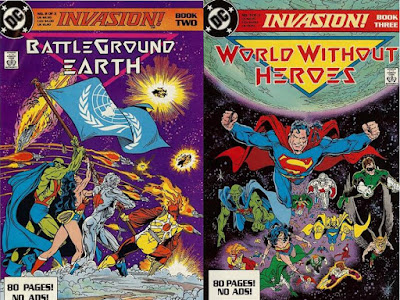 Invasion! was a three issue limited series by DC Comics in the later 1980s that crossed over with many of its titles.


Already covered some of them last time, here's the rest of the bannered crossovers of the time. 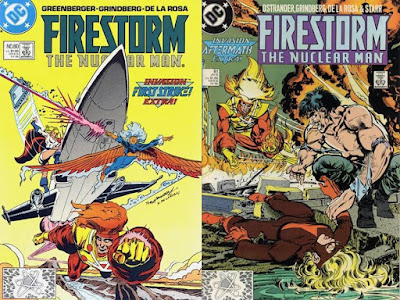 Firestorm was, at this time, a hero with his own mind, coming from the merging of Ronnie Raymond and Mikhail Arkadin (Martin Stein was not known to be part of the matrix at this time).  In Firestorm The Nuclear Man #80 (1988 by Robert Greenberger, Tom Grindberg and Sam DeLaRosa), Firestorm was recruited (along with his similarly nuclear powered friend, Firehawk) and Power Girl to battle Khunds (freeing Starman along the way), and the lot work to free America's first spaceman, Adam Strange (which happens in Starman #5).  In Firestorm The Nuclear Man #81 (January, 1989, by John Ostrander, Tom Grindberg, Arne Starr and Sam DeLaRosa), Firestorm returns to his normal life, but ends up reforming in Russia to help hero group Soyuz (young Russian heroes with mutant powers) fight Stalnoivok (a villain of extreme strength, who has gone mad battling aliens). 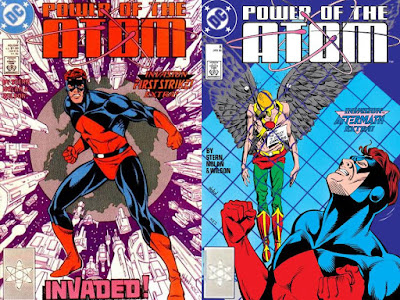 Ray Palmer was fighting his time traveling foe, Chronos, when the Invasion! hit.  The shrinking hero formed an alliance with Chronos in Power of the Atom #7 (Holiday, 1988, by Roger Stern, Graham Nolan and Keith Stan Wilson). freeing humans trapped by the Khunds. In Power Of The Atom #8 (January, 1989,  by Stern, Nolan and Wilson), Atom checks on the world's repair efforts (meeting Green Lantern along the way), finds that Chronos ended their truce by killing a Thanagarian Wingman (Ray thinking for a second it might be his friend, Hawkman), and goes to confront his foe as something bad happens for Earth (resolved in Invasion! #3). 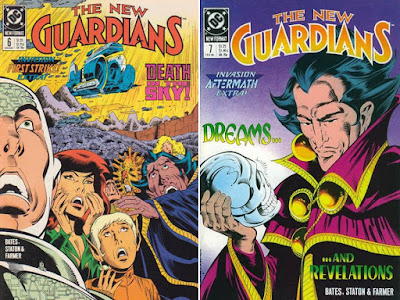 The New Guardians were heroes that came out of the last DC crossover, Millennium, and were a group of heroes (Ram, Gloss, Floro, Extrano, Harbinger and not pictured, Jet) who, working with former Green Lanterns Arisia and Kilowog, faced the Warlords of Okaara in New Guardians #6 (Holiday, 1988 by Cary Bates, Joe Staton and Mark Farmer) with fatal results for a member of the team.  In New Guardians #7 (February, 1989 by Bates, Staton and Farmer), the team splits up to deal with the loss, and team sorceror, Extrano, gains a crystal skull to focus his power. 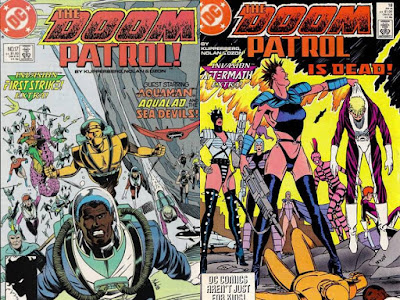 A later incarnation of the Doom Patrol, with original members Robotman and the Chief, and newer members temperature controlling Celsius, Negative Woman (similar powers to Negative Man), energy blasting Tempest, magnetic Lodestone and fiery Scott Fischer work with alien foe of the Patrol, Garguax (who was not invited into the Alien Alliance) against the Gil'Dishpan, to save Atlantis (along with help from Aquaman, Aqualad and the Sea Devils) in Doom Patrol #17 (1988 by Paul Kupperberg, Graham Nolan and Timothy Dzon), with the team losing a new member.  In Doom Patrol #18 (January, 1989, by Kupperberg, Nolan and Dzon), the team deals with the loss, as former Negative Man Larry Trainor is injured in a crash, and Negative Woman Valentina Volstok loses her powers, as the rest of the team gathers for the funeral for their fallen comrade (and leads into Invasion! #3, where another new member also perishes). 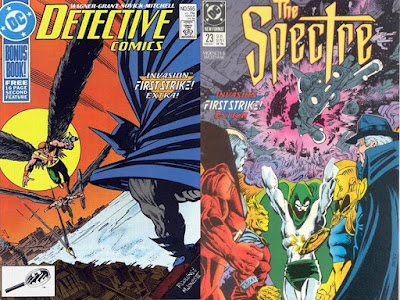 Batman was recruited to battle Thanagarians, Durlans and Khunds in Cuba by Maxwell Lord in Detective Comics #595 (1988, by Alan Grant, John Wagner, Irv Novick and Steve Mitchell), and the Spectre kept the supernatural members of the DCU (Madame Xanadu, Deadman, Demon, Dr. Fate, Phantom Stranger, Tala and Zatanna) out of the conflict (with one exception, as seen in Invasion! #2), in Spectre #23 (Holiday, 1988 by Doug Moench and Chris Wozniak). 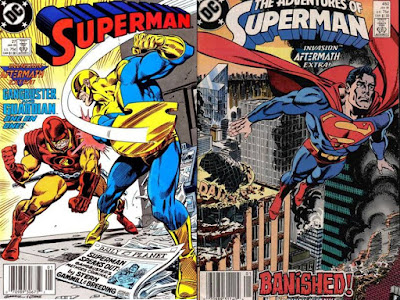 Superman had his two issues after Invasion! #2, the Aftermath issues, starting with Superman #27 (January, 1989 by Roger Stern, Kerry Gammill and Brett Breeding) with an exhausted Clark Kent (Superman), getting some rest, while Gangbuster goes to attack Luthor (who is protected by Brainiac, though not that well, as Brainiac went into a coma trying to read Gangbuster's mind), then Gangbuster is confronted by the Guardian, who finds out that Gangbuster is.... next in Adventures of Superman #450 (January, 1989), revealing who this Gangbuster really is, and leading Superman to decide that it is too dangerous for him to stay on Earth (and we also see the prototype Supergirl, Matrix, with the Kents in this issue).  Superman prepares to leave Earth (but events lead him back for Invasion! #3). 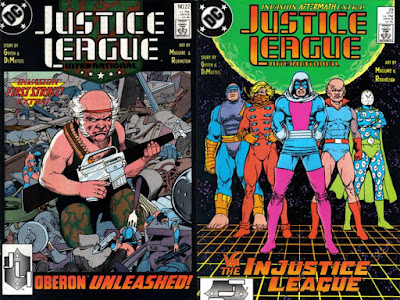 The current Justice League is pretty busy fighting Khunds with Wonder Woman, so Mr. Miracle's assistant, Oberon and future hero, Booster Gold, are left to defend their HQ in  Justice League International #22 (1988, by Keith Giffen, J. M. DeMatteis, Kevin Maquire and Josef Rubinstein) from miniaturized Khunds.  The team regathers in Invasion! #2, plus many other heroes, and in Justice League International #23 (January, 1989 by Giffen, DeMatties, Maquire and Rubinstein), sees the gathering of the Injustice League (Big Sir, Cluemaster, Major Disaster, Multi-Man and Clock King, and the not pictured Mighty Bruce) form to raid a Khund ship, with disastrous results (for the Injustice League), facing Guy Gardner (then, onto Invasion! #3, and meeting more heroes). 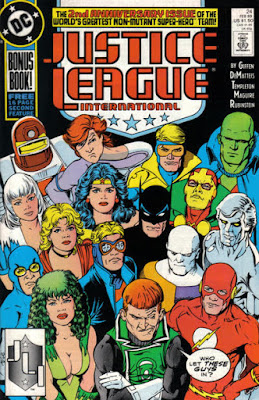 The invasion had ended, and the pieces needed to be picked up....and they were in Justice League International #24 (February, 1989), with an expansion of the current JLI of Blue Beetle, Fire, Guy Gardner, Ice, Batman, Mr. Miracle, Captain Atom, Rocket Red, Booster Gold and Martian Manhunter), into a new team with Elongated Man, Wonder Woman, Power Girl, Animal Man, Metamorpho and Flash (Wally West) (and Hawkman and Hawkwoman leaving).....with more on that to follow, and of these stories, only the Justice League Internationals have been collected so far (#22 in their 3rd TPB, and #23 and #24 in their 4th)!

Posted by Dave's Not Here Comic Blog at 4:02 AM