Historic Formation of the All-Star Squadron 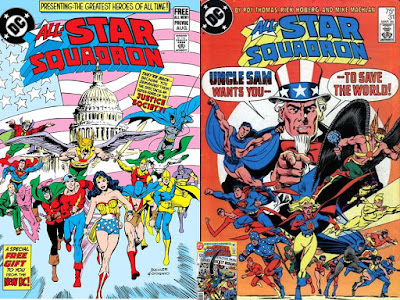 December 7th, 1941 was "a date which will live in infamy" as Franklin D. Roosevelt said, as the Japanese fleet launched an attack on Pearl Harbor, bringing the United States into World War II.

But, how did that date go in a fictional world where Superman was active since June, 1938, Batman since May, 1939, and there was a teams of heroes like the Justice Society of America and the Seven Soldiers of Victory? 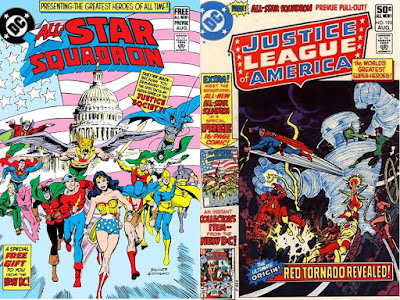 That question was answered starting with Justice League of America #193 (August, 1981) in a special preview comic, by Roy Thomas, Rich Buckler, Dick Giordano and Jerry Ordway, as readers saw Flash, Green Lantern and Wonder Woman race and be captured by Solomon Grundy; Sandman, Johnny Thunder and Starman be taken down by the Sky Pirate; Dr. Fate and the Spectre be defeated by Fate's foe, Wotan; Superman, Batman and Robin be defeated by the Alchemist, Professor Zodiak) while opening a USO function; but, Hawkman, Atom and Dr. Mid-Nite were able to defeat their foe, the attacking Monster (all while being watched by a man in a trenchcoat).  If there was trouble on this day (December 7th, 1941), who could FDR call?  (The answer would be, "The All-Star Squadron", but they didn't exist yet.). 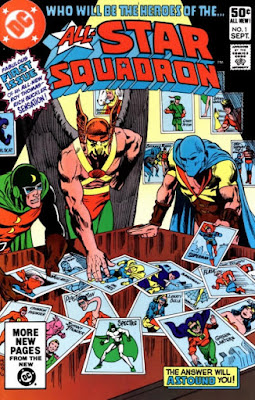 Answers came in All-Star Squadron #1 (September, 1981 by Roy Thomas, Rich Buckler and Jerry Ordway), as Pearl Harbor was being attacked, Hawkman learned of the JSA's capture, fighting off King Bee with Plastic Man, and Dr. Mid-Nite and the Atom meet the man in the trenchcoat, the original Robotman, and the lot head to the White House as people begin to think of "The World On Fire".

Heroes Johnny Quick and Liberty Belle (who are reporters in their alter egos, and were both present during events chronicled in the Justice League issue as Johnny Chambers and Libby Lawrence) meet outside the White House as Hawkman and FDR decide to gather all heroes to find out what's going on....and the villain of the piece, time traveler Per Degaton. is revealed to the reader while he attacks the Shining Knight (of the Seven Soldiers of Victory) with his villainous minions. 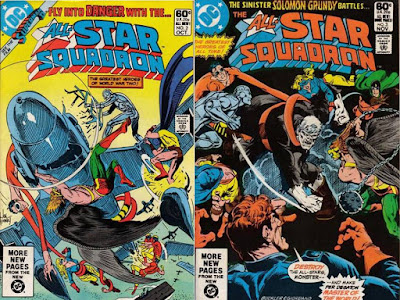 The newly formed All-Star Squadron head west (adding Quality heroine, Phantom Lady as well), as Per Degaton, "The Tyrant Out Of Time" works on attacking San Francisco with the villains he had recruited from 1947, as Degaton figures this will get the USA to attack Japan first, allowing him to take over the world...and the newly formed All-Star Squadron defeat the villains (with them going back to their own time) and freeing the captive Justice Society of America, Shining Knight and Danette Reilly (who had been exposed to mystic forces and volcanic gas) in All-Star Squadron #2 and #3 (October and November, 1981 by Roy Thomas, Rich Buckler and Jerry Ordway), and the heroes begin to get an idea of "The Dooms Of Dark December". 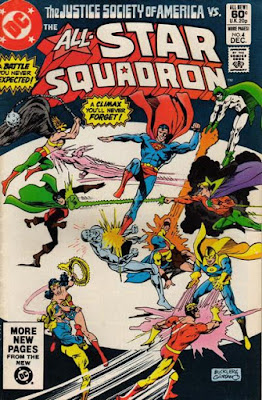 The All-Star Squadron, whose members include all the heroes mentioned above, get a look at the results of the attack on Pearl Harbor by flying there on December 8th, 1941 in All-Star Squadron #4 (December, 1981 by Roy Thomas, Rich Buckler and Jerry Ordway) in the "Day Of The Dragon King"....the heroes had planned to go to Japan immediately, but a new villain, the Dragon King, is introduced, who uses the supernatural power of items like the Holy Grail, and Spear of Destiny to create a mystical shield that affects supernatural and otherworldly powered heroes like Dr. Fate, Spectre, Johnny Thunder, Green Lantern, Wonder Woman and even Superman, making them work for the Axis forces, forcing the heroes to all retreat...and let the war be fought in conventional ways, as Danette Reilly learns her brother Rod was injured at Pearl Harbor. 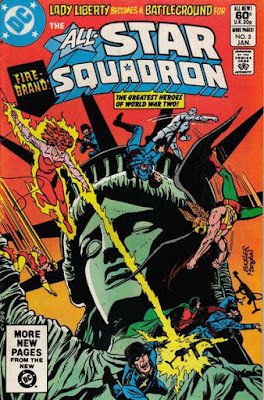 In All-Star Squadron #5 (January, 1982 by Thomas, Buckler and Ordway), Danette learns her brother was the non-powered hero, Firebrand, now unable to be Firebrand for a time thanks to injury, and learns she received flame powers thanks to her time, takes over his mystery man name, and joins the All-Star Squadron in fighting a new menace, the Feathered Serpent, who is working with the Nazis...


...continuing the story, and adding Hawkman's girlfriend, Hawkgirl, into the mix as well.... 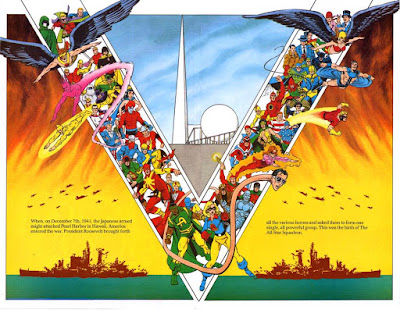 The heroes continued the fight against the Axis on the homefront, as All-Star Squadron lasted 67 issues (and 3 Annuals), eventually adding most of the Golden Age heroes to its roster (and covering comic history to about April, 1942).  The series also filled in DC history, exploring what happened to the Quality heroes on December 7th (and how they went to another Earth, stopping the Japanese attack on Pearl Harbor, allowing the Nazis to win World War II....and forming the Freedom Fighters under Uncle Sam), as well as adding to the history of Earth-2, and the Justice Society of America (including future members Hawkman's partner Hawkgirl,  Sandman's partner Sandy, Wildcat, Mr. Terrific and Robin), the Seven Soldiers of Victory, and even other Golden Age characters like Johnny Quick, Liberty Belle, Robotman and Plastic Man... 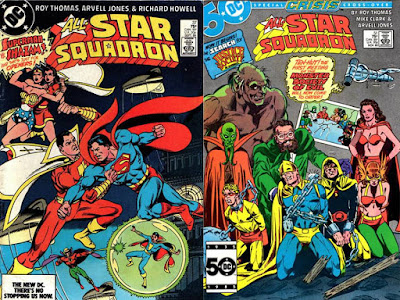 ...with later additions to the team, like Tarantula, the Guardian, TNT and Dan the Dyna-Mite, Air Wave, Manhunter, Zatara, Sargon, Mr. America, Midnight, the Whip, Dr. Occult, and even World War II heroes created later, like Steel (renamed Commander Steel after the assistance of the All-Star Squadron in freeing him from Baron Blitzkreig), as well as new heroes like Firebrand and Amazing Man, and facing off against the Marvel Family and the Monster Society Of Evil... 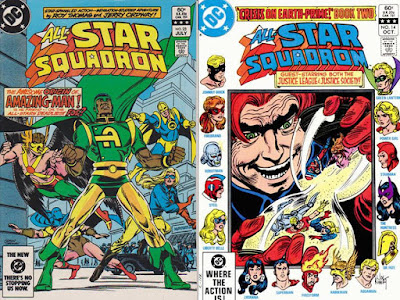 ...but it all started on one day, and the machinations of Per Degaton.