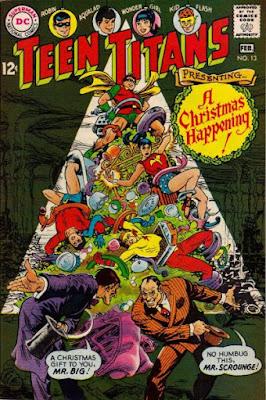 More accurately, the title of the story was "The TT's Swingin' Christmas Carol" for all of you hepcats around when Teen Titans #13 came out back on cover date January-February, 1968 by Bob Haney and Nick Cardy.

This delightful tale, beautifully rendered by artist Nick Cardy, detailing the Titans role in a modern day reenactment of Dickens' classic tale....as Robin was reading in the issue before going to a Batman comic.  The team ends up fighting Jacob Farley and Mr. Scrounge, with the Titans giving junkyard owner Scrounge the Dickens' treatment, with Kid Flash as the Ghost, Aqualad as the Ghost of Christmas Present, and Wonder Girl as a swingin' Ghost of Christmas Future, at least until Mr. Big shows up.  They still defeat the villain, get a new wheelchair for Tom, and even better job conditions for Mr. Ratchet! 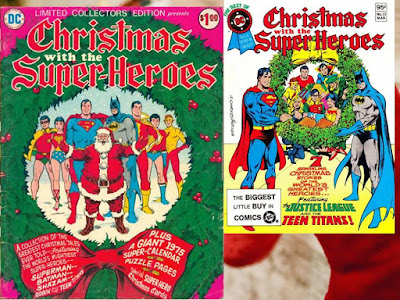 This story was also reprinted many times, including in Limited Collector's Edition C-34 (February-March, 1975, cover by Nick Cardy) and the Best of DC #22 (March, 1982, cover by Rich Buckler and Dick Giordano), but both of these reprintings are missing the second page... 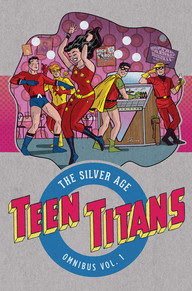 ..how's that for coal in your stocking?

But you can get the complete tale in the Teen Titans: The Silver Age Omnibus with a groovy cover by Darwyn Cooke, and all the original Teen Titans tales from Teen Titans #1 to #24, and their premiere tales from Brave and the Bold and Showcase, featuring Robin, Kid Flash, Aqualad, Wonder Girl and Speedy!
Posted by Dave's Not Here Comic Blog at 4:12 AM