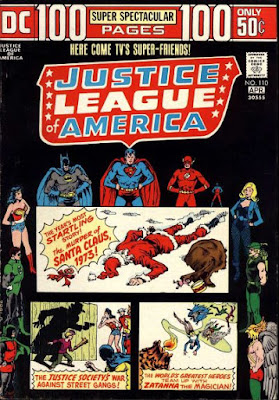 Doesn't sound like a happy tale, does it?  Sadly, bad things still happen even at Christmas, as a mall Santa Claus was found murdered, and this was enough for Superman and Batman to call in the JLA....but Flash (Barry Allen) is with Iris and her parents in the future, Elongated Man, Atom and Aquaman are also busy, and Hal Jordan slips in the tub answering the call, so his back-up, John Stewart, has to take over as Green Lantern for this case. 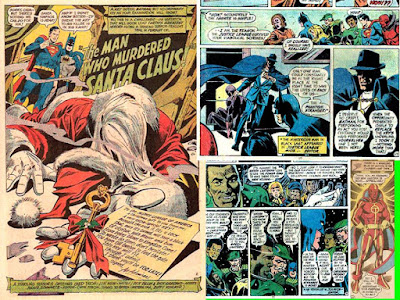 Things don't go well for the JLA, as Superman and Black Canary appear to die, then Batman and Green Arrow, leaving Red Tornado and the new Green Lantern to face off against the Key (an old JLA foe), who plans on releasing a "doom bomb" on this old, rundown neighborhood....at least until the Phantom Stranger shows up to stop him.  The Phantom Stranger helped the Justice League on occasion, and had saved all the previously thought dead JLAers as well.  But, the Key still manages to blow up the neighborhood! 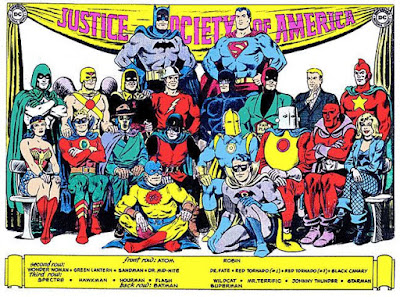 Thankfully, Green Lantern John Stewart is there, to rebuild the neighborhood (minus the rats, leaking pipes and other problems faced by it's residents!).   Best of all, Black Canary gives Red Tornado a new costume, allowing an android a chance at a Merry Christmas!  Better still, this issue has the a reprint of the JSA adventure from All-Star Comics #40 (April-May, 1948), with the Justice Society facing the Crimson Claw gang, and Zatanna's first meeting with the JLA (including Elongated Man) from Justice League of America #51 (February, 1967) and Murphy Anderson's drawing of the JSA from Justice League of America #76 (November-December, 1969).  How's that for a Christmas present?

Posted by Dave's Not Here Comic Blog at 4:05 AM