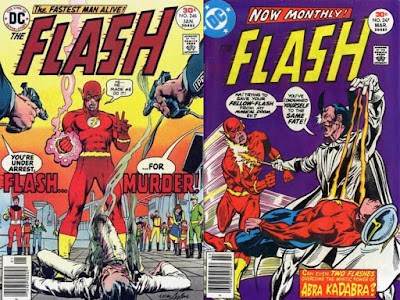 By now, team ups of the Flashes (Barry and Jay) and the JLA and JSA were pretty regular occurrences, but still they could sneak up on a Flash here and there.

This time, Barry had a case of his own, that found a way to work Jay into it. 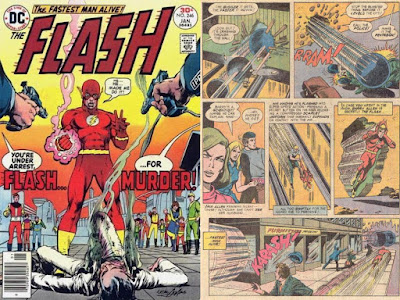 Neal Adams did a stunning cover for this issue of Flash #246 (January, 1977) by Cary Bates, Irv Novick and Frank McLaughlin, with what seems a pretty final end for Flash foe, Abra Kadabra in the 64th Century.

Barry Allen tries to enjoy bowling with his wife, Iris, and their friend Stacy Conwell (and her friend Chuck Marston), when the bowling ball grows out of control!  This spurs Barry on to some Flash action....where he beats the large bowling ball.

Still, he had been dealing with this problem of "impossible happenings" already (as seen in the last issue), and traces it back to its source....a small pyramid in Barry's lab! 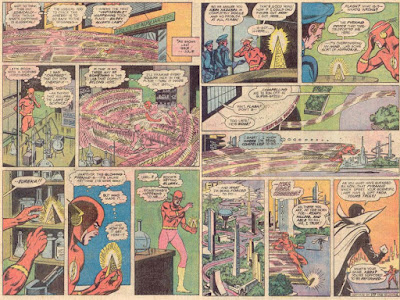 This pyramid transports Barry to the 64th Century, where he sees criminal Abra Kadabra being applauded on the street!  Checking with authorities, Flash finds this is a new rehabilitation treatment, but Abra hates it.  So, with the glow of the pyramid, Flash now feels compelled to kill Abra Kadabra, and does....vibrating him to death!  The police arrest the Flash, nullifying his speed and taking him to jail.

Green Lantern (Hal Jordan) also concluded his back ups here in Flash (battling transformed Atom foe, the Plant Master), finally moving back to his own magazine (albeit, one he would share with Green Arrow for a time). 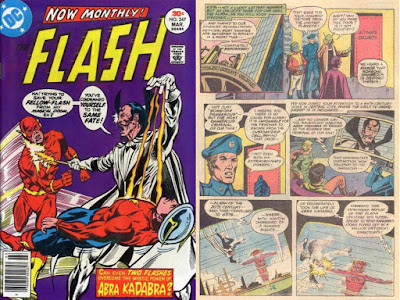 Rich Buckler and Frank Springer provided the cover for Flash #247 (March, 1977), as Cary Bates, Irv Novick and Frank McLaughlin finished this battle of Flash vs. Abra Kadabra (with Jay Garrick joining the battle).

Barry Allen finds himself trapped in an escape proof cell in the 64th Century, framed for the murder of Abra Kadabra....yet, Abra Kadabra had just pulled off his own escape of his own time, ending up back in the Flash's time...but, wrong Flash! 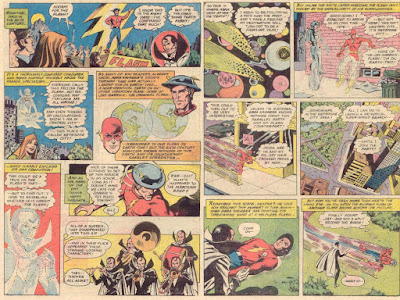 Abra is upset as he finds the people of the city he landed in applauding the Flash....Jay Garrick's Flash in Keystone City!    Abra seems to have forgotten meeting Jay before (Flash #170 with Dr. Fate and Dr. Mid-Nite), and thinks this is a trick of Barry's.  So, Abra engages Jay's Flash as Barry tries to escape his cell.   Barry eventually breaks free and repeats Abra's trick to go try to follow him, as Abra captures Jay.  Barry rescues Jay, and the two take down the rogue future magician.

Sadly, these two tales have yet to be reprinted. 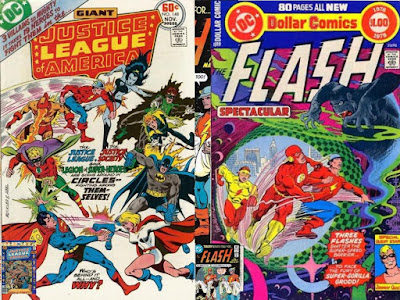 Jay Garrick had last appeared in the 14th JLA/JSA crossover with the Squadron of Justice and Marvel Family, and would appear next in the 1970s All-Star Comics revival with Power Girl, until the next JLA/JSA meeting (which involved the Legion of Super-Heroes and their 30th Century future), and the two JLA/JSA team-ups were covered here!  Barry and Jay still had a couple of their individual team-ups to go before the Crisis On Infinite Earths!