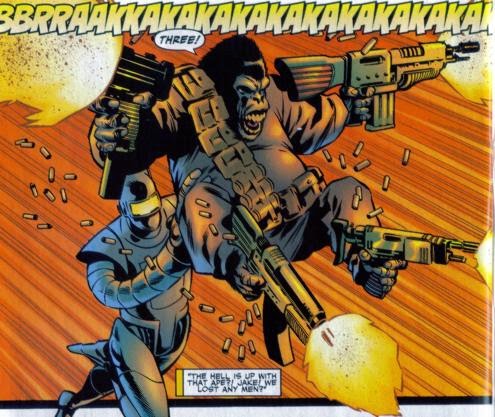 Robots and gorillas use to be all the rage in comics, now as well as back in the 1950s.


Don't think so...well, take a look at these two teammates of the Agents of Atlas! 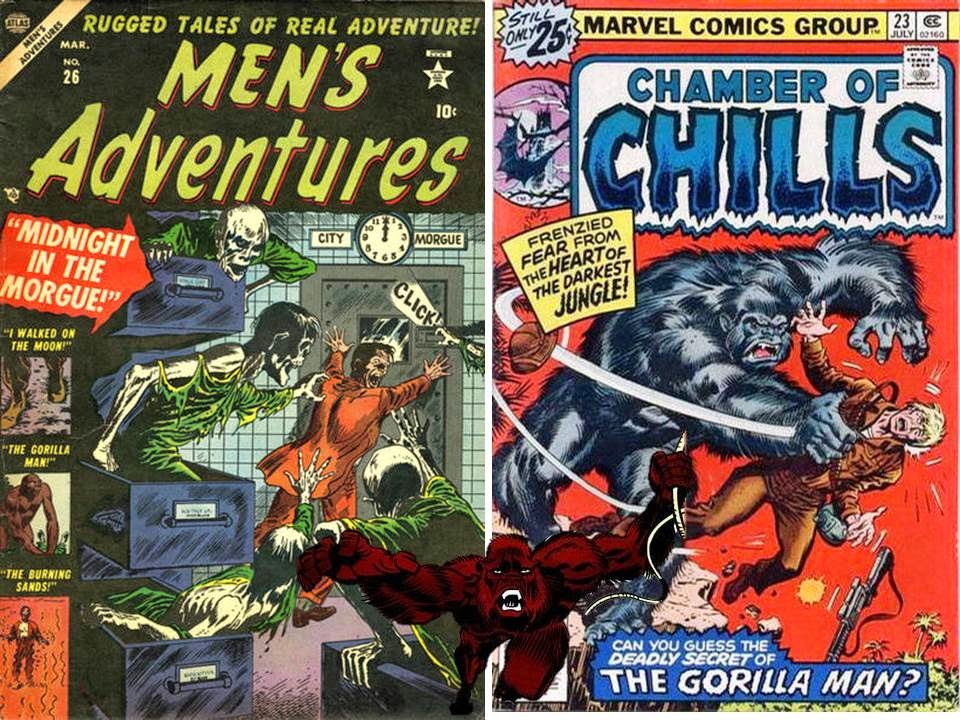 Marvel has had a few Gorilla Men over the decades, but one of the earlier ones was Ken Hale, and he got his start in Men's Adventures #26 (March, 1954, with art by Robert Q. Sale, under a cover by Russ Heath).  Soldier of fortune Ken Hale had dreams of a man/gorilla hybrid, and went to Africa to find one, and by doing so, a battle between the two wherein the current Gorilla Man tricked Hale into killing the beast, leading to Hale being turned into an immortal Gorilla Man himself!  (This tale was also reprinted in Chamber of Chills #23 in July, 1976). 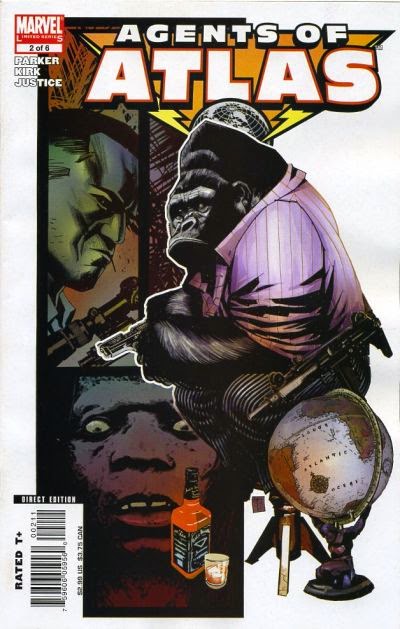 Hale was later recruited by Jimmy Woo (as Jann of the Jungle helped Jimmy find Ken) to help fight the Yellow Claw (with other 1950s heroes like Venus and Marvel Boy in the original Agents of Atlas mini-series by Jeff Parker and Leonard Kirk of 2006/2007) as G-Men, worked with Charles Xavier's first class of mutants (though didn't joined the team, in X-Men: First Class #8 in June, 2007 by Jeff Parker and Roger Cruz), and even a monstrous version of S.H.I.E.L.D.'s Howling Commandos working along with Lilith the vampire, the Glob, Warwolf, Brother Voodoo, Groot and more (Nick Fury's Howling Commandos #1-6 of 2005/2006 written by Keith Giffen), before returning in the modern day version of the Agents of Atlas. 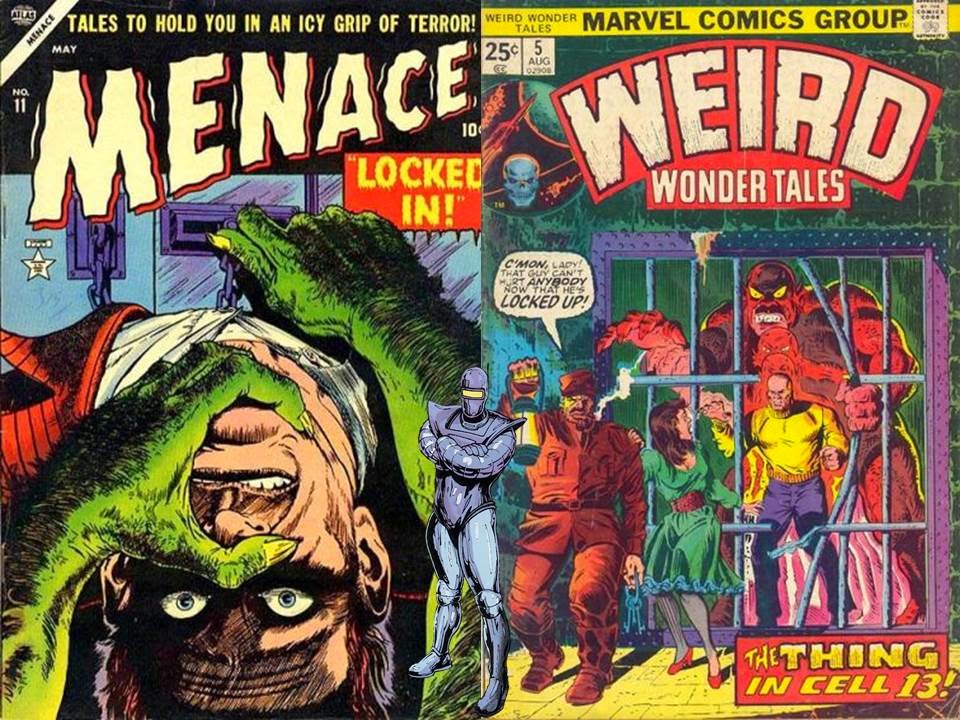 Robots were all the rage in the 1950s as well, and that was true in the Marvel horror title of Menace as well.  In it's last issue (Menace #11 of May, 1954, in a story drawn by John Romita), a scientist created a robot and M-11 was programed to kill the man in the room (and did, ending up killing it's creator, as well as the thief who planned to steal it, as it was sent to kill the man in the room!).  M-11 then wandered off to end up underwater, where he remained...(and that original tale was also reprinted in Weird Wonder Tales #5 in August, 1974, with the robot not making either cover). 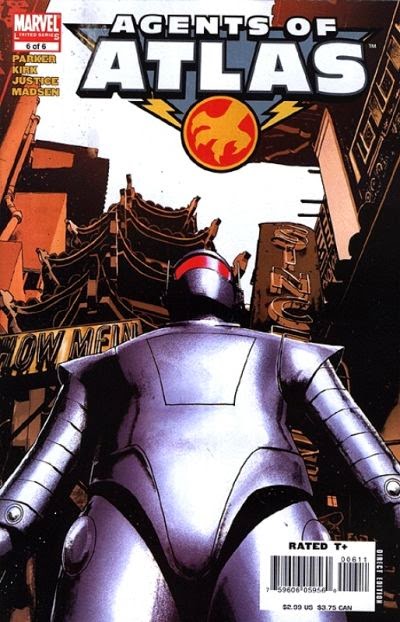 Later, in the Agents of Atlas mini-series, it was revealed that Yellow Claw had commissioned M-11 to be built to battle Jimmy Woo, and the scientist sacrificed himself in the hopes of imprinting human emotions onto the robot to prevent it from becoming a killer.  Namora (the Sub-Mariner's cousin) found the Human Robot, and let Jimmy Woo have it to help stop Yellow Claw (and was a founder of the G-Men).

The Human Robot worked with the team in the 1950s, and was instrumental in the team's revival as well, as M-11 and Gorilla Man saved the aged Jimmy Woo to battle the Atlas Foundation, as well as alien invaders the Skrulls during Secret Invasion! It was exactly that question that led to the alternate world of What If? #9 (June, 1978 written by Don Glut, and art by Alan Kupperberg and Bill Black, taking the concept from Roy Thomas) and the formation of the 1950s Avengers, with 3-D Man joining forces with heroes of Marvel Comics of the 1950s (Venus the goddess, the Human Robot, the Gorilla Man, alien band powered Marvel Boy and foe of the Yellow Claw...Jimmy Woo).  The team battled a gathering of their foes, but Eisenhower did not want them to stay together as a team.  This reality was developed further in Avengers Forever #4 and #5 (in 1999), wherein a Skrull posing as Nixon tried to take over America's space program in 1959...at least until Immortus (another time traveling Avengers villain) shut down this reality....but led to the Agents of Atlas series (which existed without 3-D Man, but later invited him in!).

All this goes to show how connected the Marvel Universe is that even odd menaces of the 1950s can become heroes in the 21st Century!