We Are The Marvel Champions Part 1 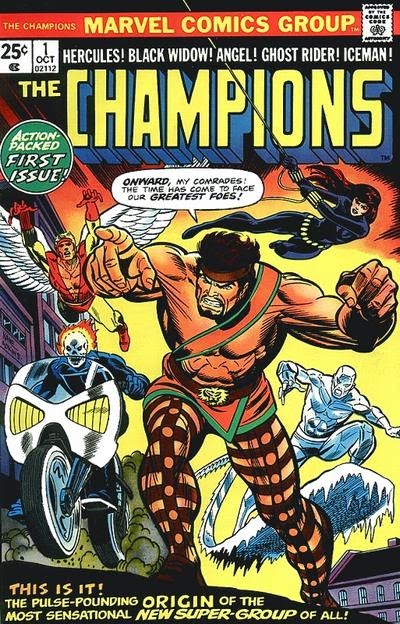 Take one son of an Olympian god, a millionaire mutant, an ex-Russian femme fatale, a walking ice box and a demon from hell...and what do you have? Certainly not a team....well, actually, there was one.

In a tribute to committee thinking, two ex-Avengers (Hercules and Black Widow) joined solo star (Ghost Rider) and two ex-X-Men (Angel and Iceman) to form...The Champions! (And it really was quite a committee...David Anthony Kraft came up with the name for the team, Len Wein and John Romita contributing to the design of Angel's new costume - taking away a blue colored costume in a blue dominated team, and Len insisting a team have five members). 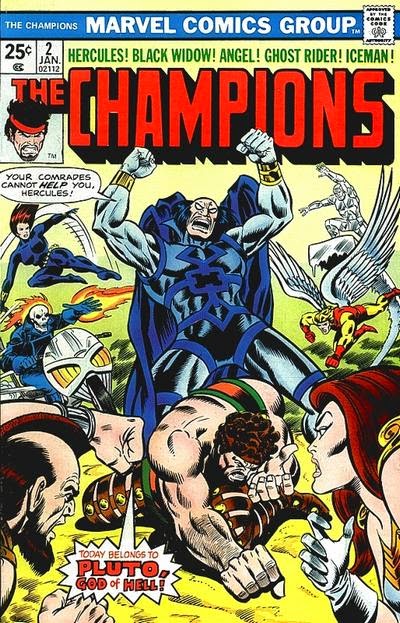 Cover dated October 1975, the saga of Marvel's Champions began. Originally intended to be an Angel/Iceman series, the Marvel offices convinced writer Tony Isabella to add Hercules (a strongman), Black Widow (a woman) and a solo star (Ghost Rider...though, had he not gotten his own title, it could have been Black Goliath! Or even Son of Satan, Captain Marvel or Power Man) to make it a full-fledged team. Art on the first two issues was by Don Heck (himself no stranger to the Avengers or the X-Men), and Champions #1-3 (also originally suppose to be Giant-Sized Champions #1, another in a long line of pre-production tinkering for the team) told the tale of how these unlikely teammates would gather. 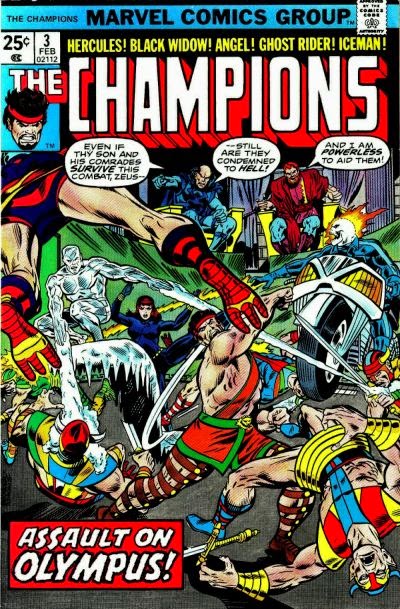 The hell it was to put this series together was reflected in the story...it was Pluto (Olympian god of the netherworld), who, in an agreement with other more demonic underlords to restrict the actions of Zeus, god-father of the Olympians (and Hercules in particular). Pluto's plan was to wed Hercules to Hippolyta (queen of the amazons), and Venus (the goddess of love) to Ares (the god of war), which would end their interference with his plans for Earth and Olympus. If the human friendly Olympians don't play along, the alliances he made with the netherworlder demons like Mephisto, Satan and the Demon of the Mask, would destroy Olympus. Hercules and Venus oppose this, along with the rest of the future Champions, but Pluto has Zeus' (father to the Olympian gods, and Hercules) aid in bringing them back to Olympus. The Earth heroes eventually figure out a way to Olympus and defeat Pluto's armies, but are not enough to stop the demonically backed Pluto himself. The Ghost Rider has to convince Zeus to stop Pluto (as Johnny Blaze knows a little about demons, and gets Zeus to realize that the only reason the underlords united was to topple Olympus). Venus stays behind to spread the message of love amongst the gods, and Hercules and the rest of the humans return to Earth. 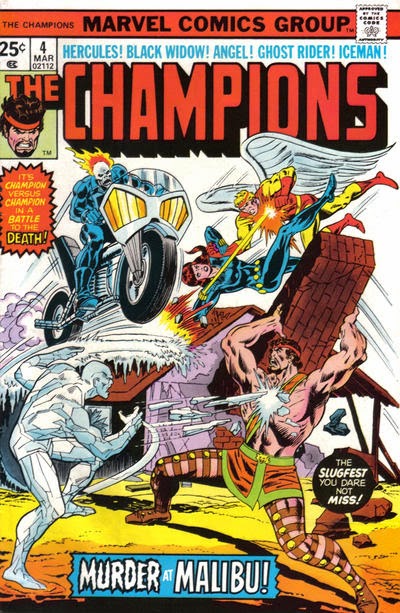 The Champions next gather in Champions #4 (May 1976, by X-Men writer Chris Claremont and art by George Tuska, who also drew #3).

In this issue, the team faces Dr. Edward Lansing, who has a solution to the homeless problem – turning them into his mind controlled mutated slaves. Black Widow and Hercules are the first to stumble onto his plot, but the Mutates overpower the two. Dr. Lansing then uses his mind control box on the two ex-Avengers, and sends them to attack the two ex-X-Men (Iceman and Angel, seems the Avengers and X-Men always fight!) as well as Black Widow’s mentor, Ivan Petrovich, who were all at Angel’s beach house. In facing Ivan, Black Widow breaks her control, then turns to break Dr. Lansing’s control box…which frees Hercules and the Mutates, but the Mutates kill the Doctor. Angel decides at this point that the team should form on a regular basis, to be champions to protect the innocent. The Champions bid fair well to Ghost Rider in Ghost Rider #17 (April 1976, by Tony Isabella and Frank Robbins) but that’s just to allow Johnny Blaze time for his own series, and doesn’t stop their adventures. 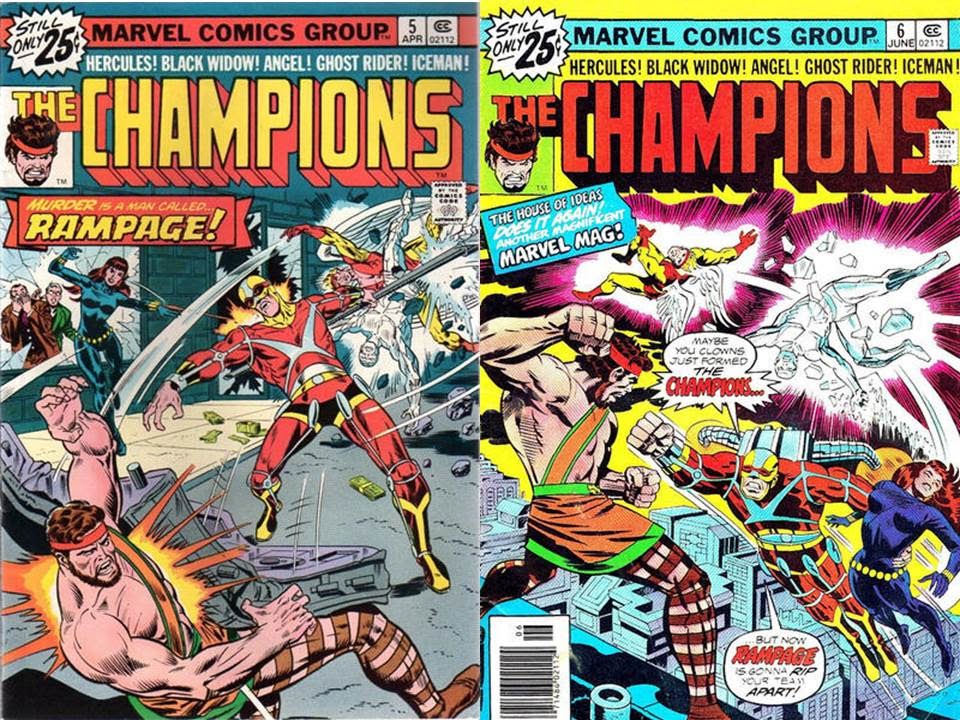 In Champions #5-6, (April and June of 1976, written by Tony Isabella and art by Don Heck in #5, and George Tuska in #6), the team faces an inventor, Stuart Clarke, who succumbed to the recession and uses his exo-skeleton to try to rob a bank. At the same time, Angel was securing his right to the Worthington fortune his mother left him, and the team battles Clarke (who gets the name, Rampage) and asks him to surrender, but Rampage instead tries to kill himself by exploding his suit’s jet back. Iceman manages to save everyone, even Clarke, who is injured by the blast. During all this, Black Widow is elected leader of the team. 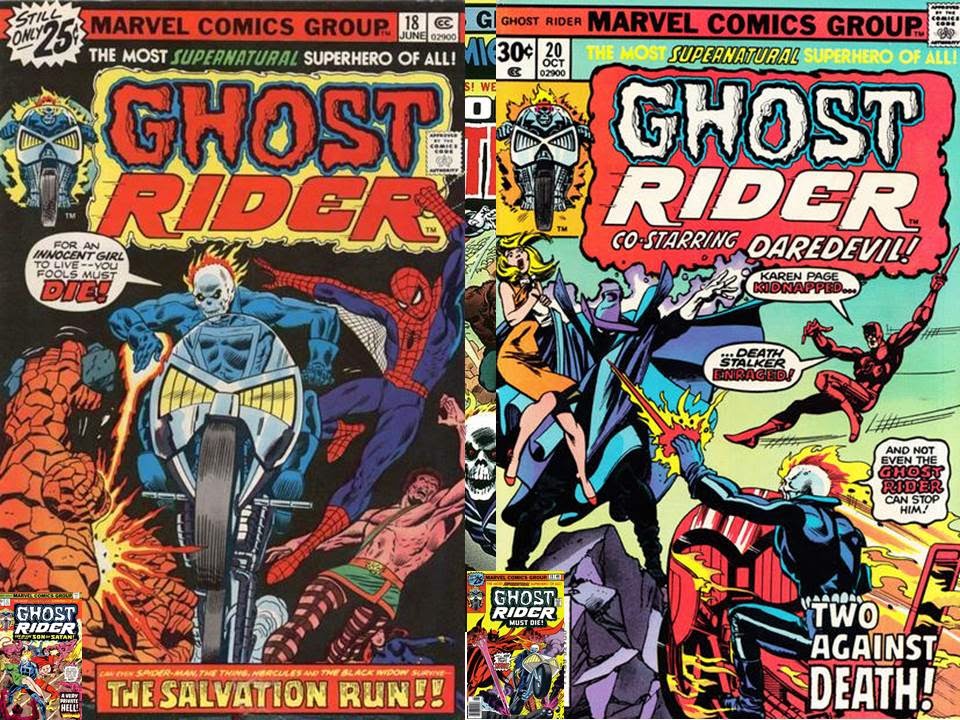 The team briefly appears in Avengers #151 (September 1976), to comment on the hype around the announcement of the Avengers new roster (which will include ex-X-Man the Beast…he comes in more later). Ghost Rider is present as well, having returned from his team-ups with the Son of Satan, the Werewolf by Night, the Man-Thing, Morbius and Daredevil in Ghost Rider’s #17-20, Daredevil #138 and Marvel Premiere #28 (all from 1976, and explains why the motorcyclist from hell was not available for the two issues with Rampage).

Back To Full Strength 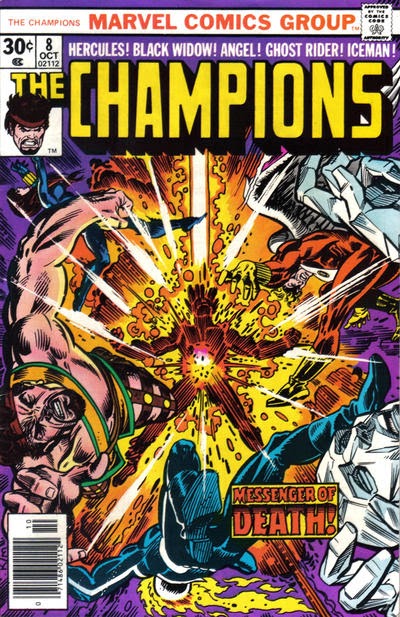 In Champions #7-10 (August-January 1976/1977), the team experiences a few explosive changes both inside and outside the book (as shown by this stunning cover by artists Gil Kane and Al Milgrom for issue #8! And, it wasn’t even a fully symbolic cover – as the damage done from this explosion gets Angel to switch from his costume to a red version of the blue costume he had worn in the X-Men, but more on that later,…so keep reading, true believer!).


Tony Isabella and George Tuska still write and draw issue #7, to set the stage, but Bill Mantlo becomes the new writer for the rest of the Champions series, with Bob Hall in some of his earliest work as an artist for issues #8-10. 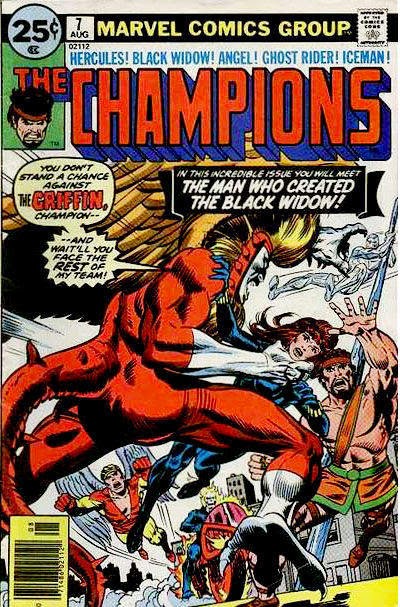 The team changes at this time as well, starting with a temporary headquarters! And, the team just starts to settle in as they get to face a menace that's like a marriage...something old (armored Russian Iron Man foe, the Titanium Man), something new (the Russian mutant Darkstar, wielder of the darkforce), something borrowed (a new Russian named Yuri in the second Crimson Dynamo armor) and...well, something that fought something blue (that being the Griffin, who faced the blue-furred Beast and Angel back in Beast's solo stories in Amazing Adventures, as well as Spider-Man and the Beast; now returned to face the Angel and his friends in an attempt to get back to being human).

Griffin and Darkstar go to free Rampage from the hospital, while the returning Ghost Rider is headed there as well to meet the Champions' first costume foe of their own and use his "demon from hell" act to get some information from the bankrupt villain. 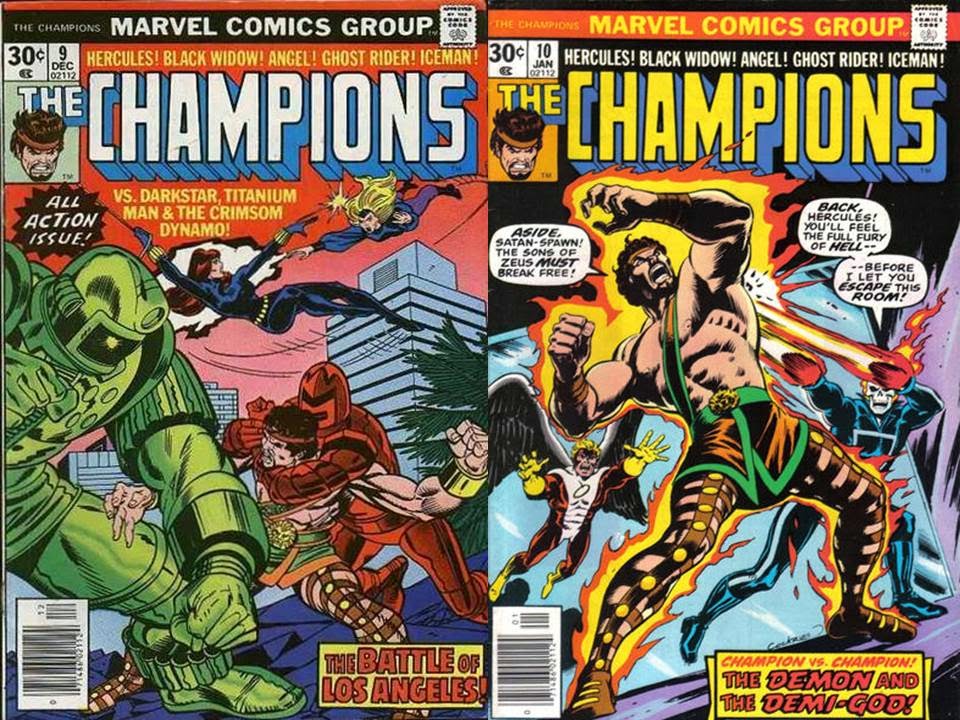 Meanwhile, the Titanium Man captures the Black Widow and her mentor, Alexi Bruskin. Rampage delivers the news of the Widow's capture to the rest of the Champions, but unbeknownst to him, his exoskeleton was booby-trapped by his supposed allies, exploding in an attempt to kill the Champions.

Thanks to Iceman, they survive, and Ghost Rider even saves Rampage. The explosion does cost Angel his costume, and he gets a red-colored variation of an old costume of his. The Russian villains then try to add Ivan Petrovich to the group they want to take home - and it is revealed why - Yuri is Ivan's estranged son. After a pitched battle in Los Angeles and in the Pacific Ocean, Bruskin dies, Darkstar switches sides, the Champions capture the Titanium Man and the Griffin and Yuri escapes. All the while, conflict grows amongst the Champions.

The conflict subsides for a while during the Christmas season, as the Champions celebrate together in Marvel Treasury Edition #13 (1975, by writer Roger Stern and artist George Tuska), where the team thinks Iceman delivered some snow...but instead it was a little Christmas magic in California!

And, the rest of the Marvel Champions' story will come soon, so stay tuned!
Posted by Dave's Not Here Comic Blog at 5:30 AM