Avengers Opposite: The Masters Of Evil 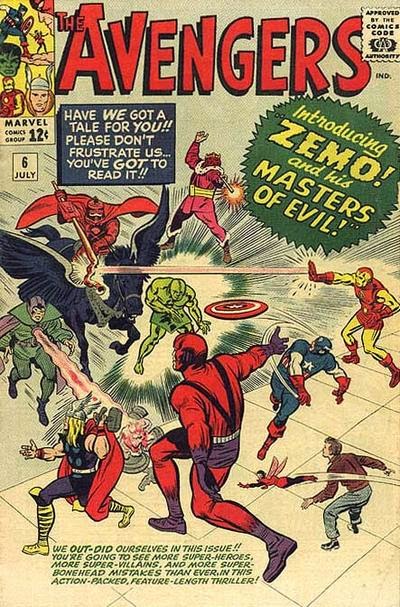 With all that assembling of heroes, did the Avengers not think that the bad guys would gather too?


They did, under the watchful eye of Baron Zemo, and became his Masters of Evil, a group with a long history, which began soon after the Avengers formed (and continues to this day….).

The Leader of the Pack 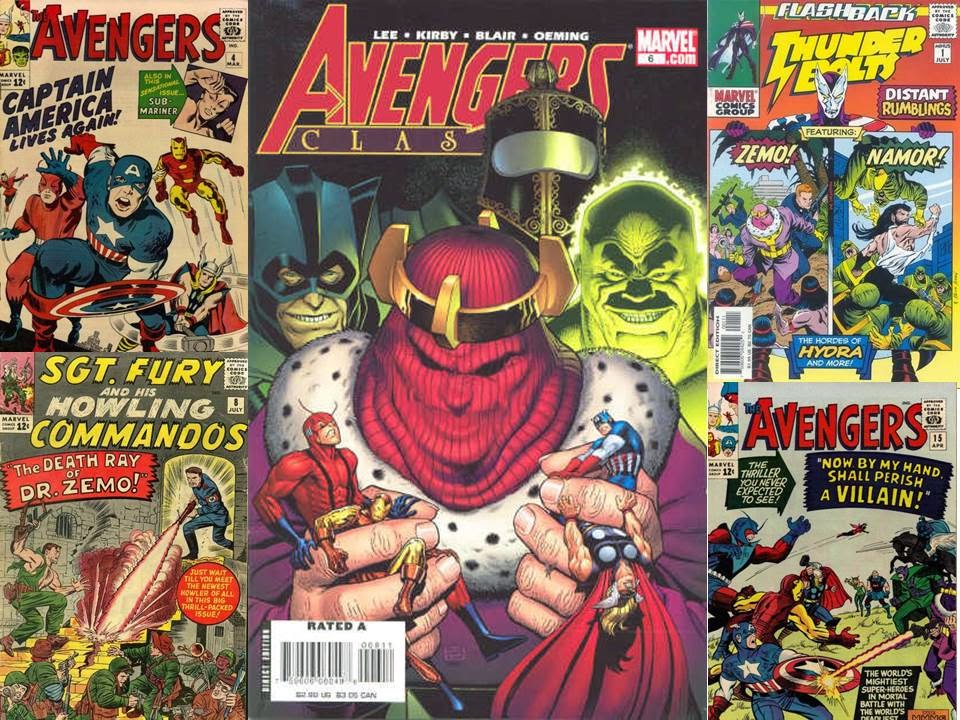 Baron Heinrich Zemo was a foe of Captain America’s during World War II…but he wasn’t introduced until Avengers #4 (March 1964), and not even seen until Avengers #6 (July, 1964, both Avengers issues by Stan Lee and Jack Kirby, wherein Zemo formed the Masters of Evil). Zemo also appeared in Sgt. Fury and his Howling Commandos #8 (by Stan Lee and Dick Ayers) at the same publishing time as Avengers #6, but that story was set in World War II. Zemo was a Nazi scientist who created many items for his leader…including the one he wish he didn’t…Adhesive X. In battle with Captain America, Heinrich had his mask permanently stuck to his head as Cap threw his shield to break a vat of the adhesive, dousing Zemo in it. Zemo was responsible for Cap being on the plane took him over the Arctic Ocean, where Bucky was thought to be killed, and leading Cap to be found by the Avengers (who had been searching for the Sub-Mariner) decades later.

The Heat Is On 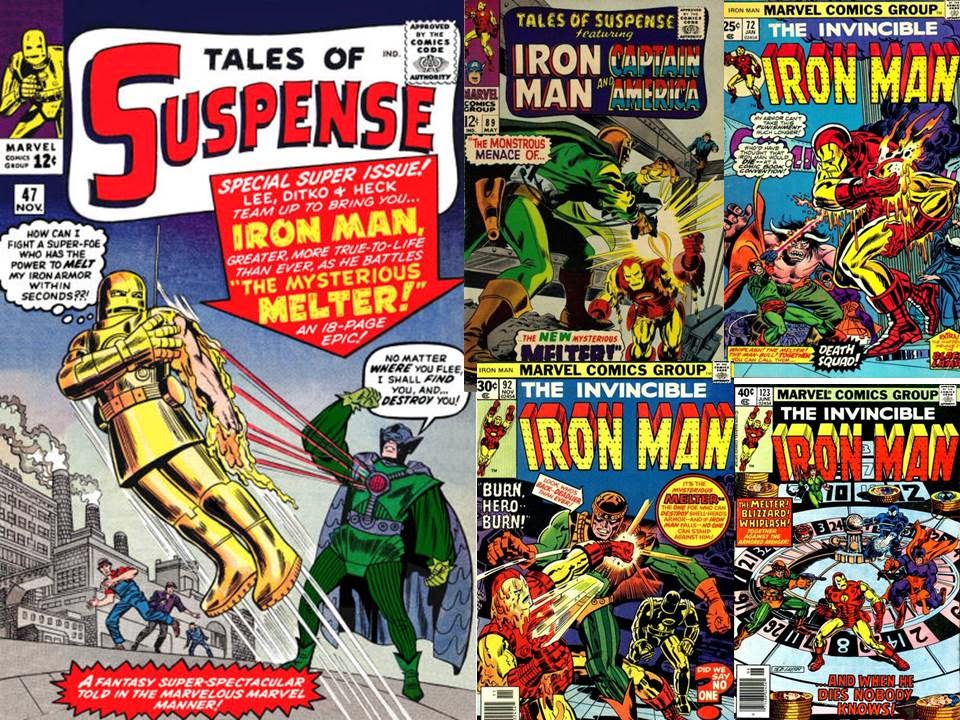 The Melter (Bruno Horgan) was a little hot under his collar when he lost his company’s government defense contracts to Tony Stark. So, naturally, he enhanced one of his melting devices, and took off to attack Stark…and ran afoul of Iron Man! All this excitement happens in Tales of Suspense #47 (November, 1963, by Stan Lee and Steve Ditko, with cover by Jack Kirby!).

The Melter had damaged Iron Man’s armor (his next red and gold suite premiered in the very next issue…though it wasn’t specifically the Melter’s damage that caused the replacement, it might have been the inspiration for Stark to do just that!). Still, the Melter wasn’t much of a villain, having that odd chest-melting beam (Iron Man hasn’t had the best foes, has he?). 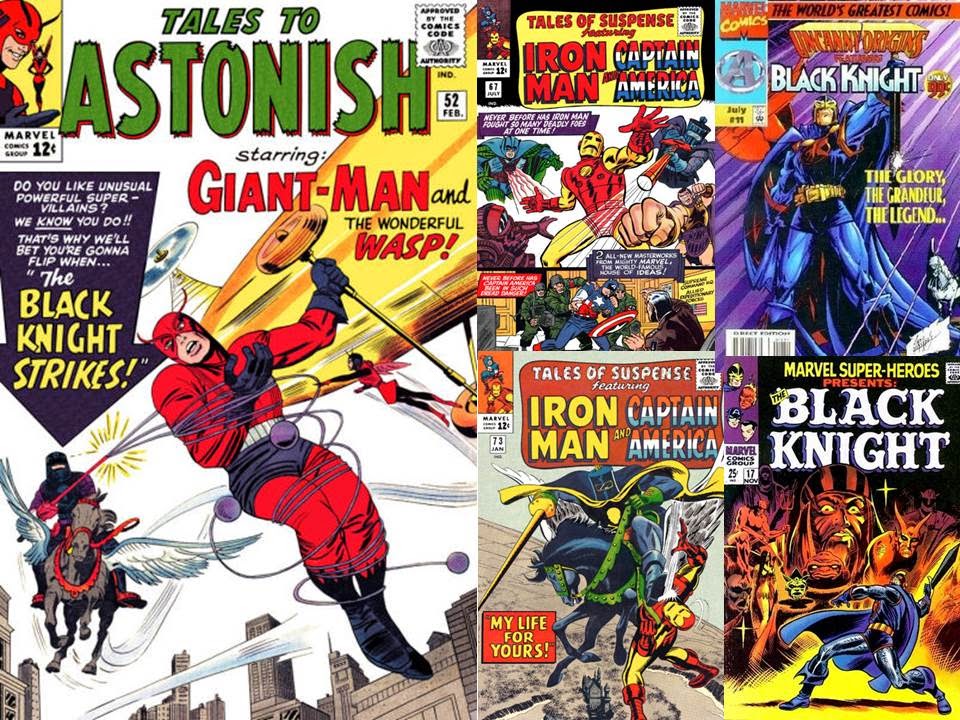 Still, you can’t beat a knight. The Black Knight, that is. Professor Nathan Garrett faced the Giant-Man and Wasp first in Tales to Astonish #52 (February, 1964, by Lee and Dick Ayers).

The professor had been arrested for treason by Hank Pym’s alter ego, but developed a winged horse and special lance to take on the identity of the Black Knight…and be defeated by Giant-Man and the Wasp. After facing this large man and his diminutive sidekick, working for Zemo was a breeze…but, Garrett switched individual foes, facing Iron Man more instead, until his wayward ways caught up to him, and he passed along the mantle of the Black Knight to Dane Whitman. 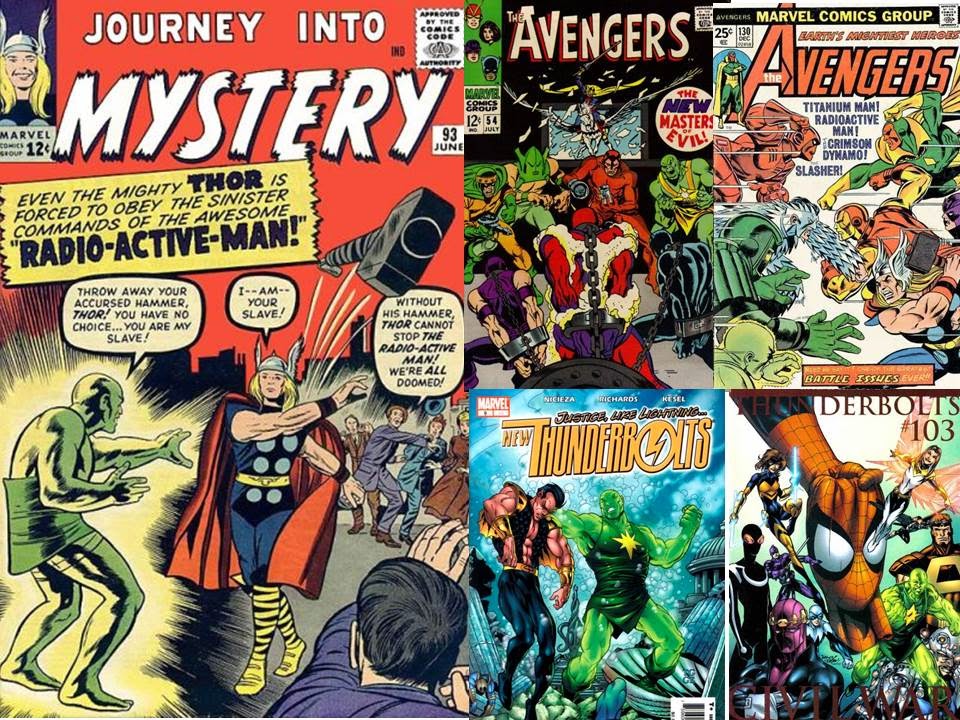 Last, but not least of the charter members of the Masters of Evil, is the Radioactive Man. Dr. Chen Lu was a Communist nuclear scientist in China, ordered to come up with a way to defeat Thor (in Journey Into Mystery #93, June 1963, by Lee and Kirby…and, hey, isn’t irate foreign scientists a trademarked foe for Iron Man?).

Lu exposed himself to radiation until he became…radioactive (thus, the name). Thor was able to defeat him in the ultimate throwdown between science and mythology, but the Radioactive Man was recruited by Zemo for his Masters of Evil (and he liked it so much, he also remained a member when others led the Masters). 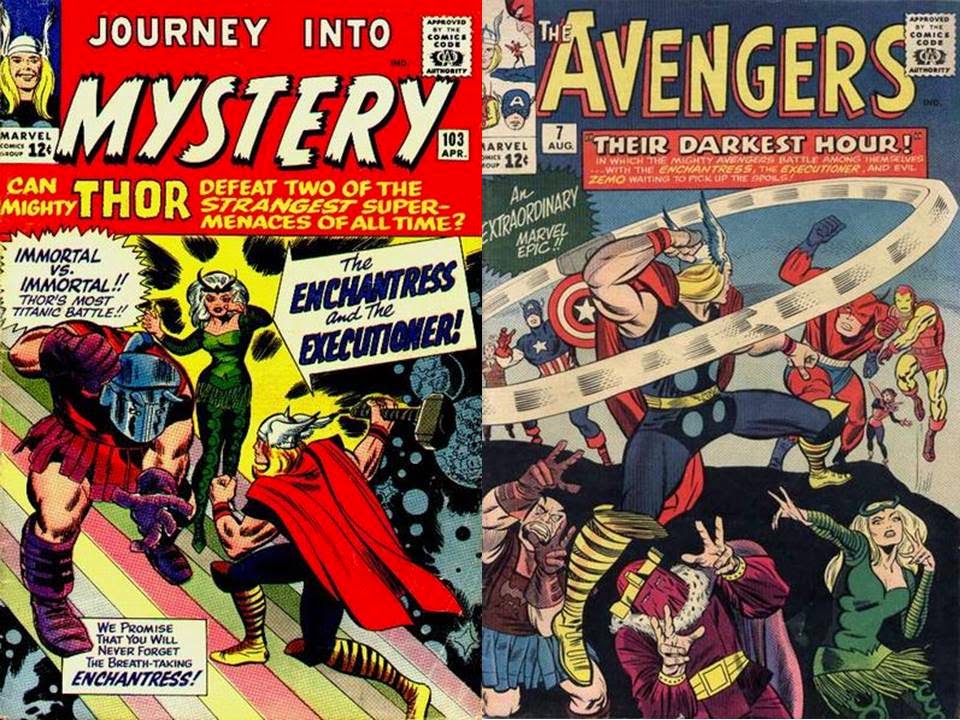 Zemo and his band didn’t fare so well against the Avengers, so he immediately set about to recruit….and he pulled in two new members, the Enchantress and the Executioner. The Enchantress (sorceress Amora, from Asgard) and the Executioner (Skurge, her Asgardian muscle) were foes of Thor (introduced to Earth with Journey Into Mystery #103, April, 1964, by Lee and Kirby). 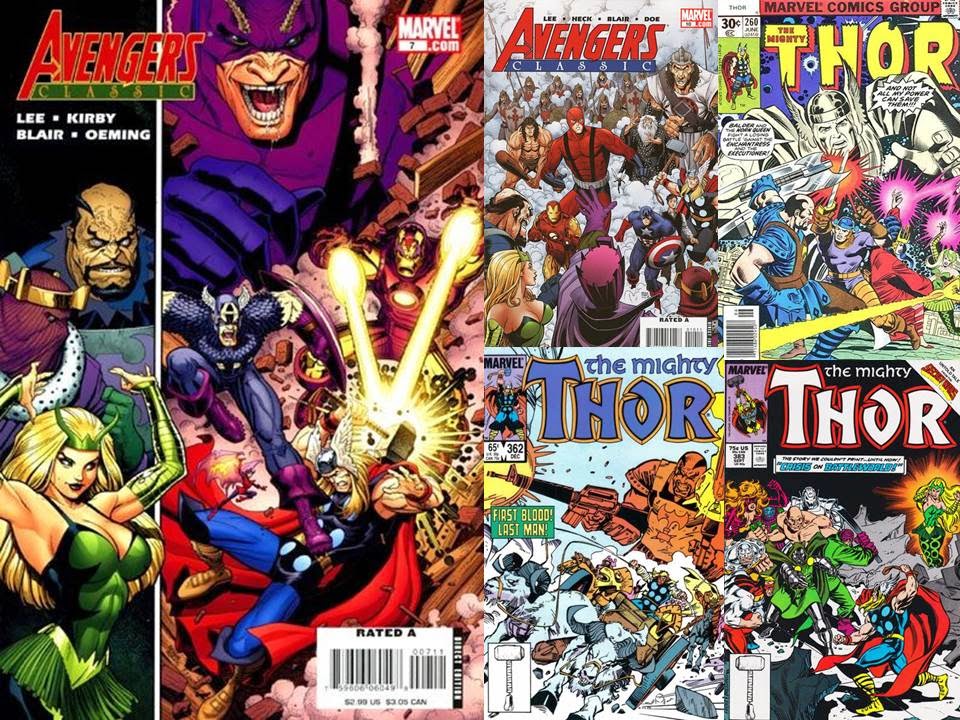 Amora welds magic and her incredible beauty as a weapon, but lusts only for Thor (much to the chagrin of her manservant, Skurge, who had fallen prey to her charms). The pair battled Thor in a few issues of Journey Into Mystery (#103 and #104) before joining the Masters of Evil in Avengers #7 (August, 1964, also by Lee and Kirby). These two also were the first members of the Masters of Evil to face the Hulk…as the Hulk had not really faced the Masters of Evil (he just hasn’t been a member when they were around…though Avengers Annual #4 cover by Sal Buscema from 1971 gives the feeling they had. Hulk just wasn’t around the Avengers that much, though the movie and animated series, the Avengers: Earth’s Mightiest Heroes give the impression the Hulk was around more). Still, if you have an interest in reading any of these tales, they have all been collected in Marvel Masterworks (as well as Marvel Essentials….mostly in the first title to feature the villain’s hero). 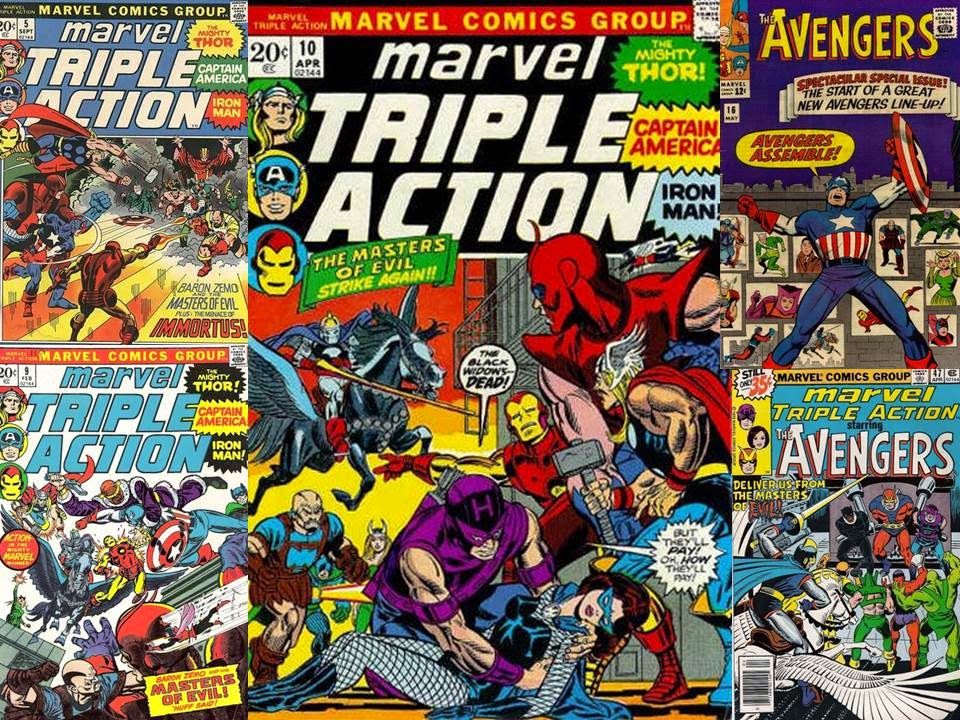 This also allows me to bring up an odd feature from the early Avengers reprints, Marvel Triple Action. It seems it was a title that featured the Masters of Evil! Here’s a few representative covers….(most of them from stories covered above, except Marvel Triple Action #10...which reprinted Avengers #16...looks like different stories, doesn't it?).

Odd, isn’t it? It’s not like you could HAVE a title focused on the Masters of Evil….could you? That would be like getting hit with a Thunderbolt out of the blue…
Posted by Dave's Not Here Comic Blog at 5:30 AM