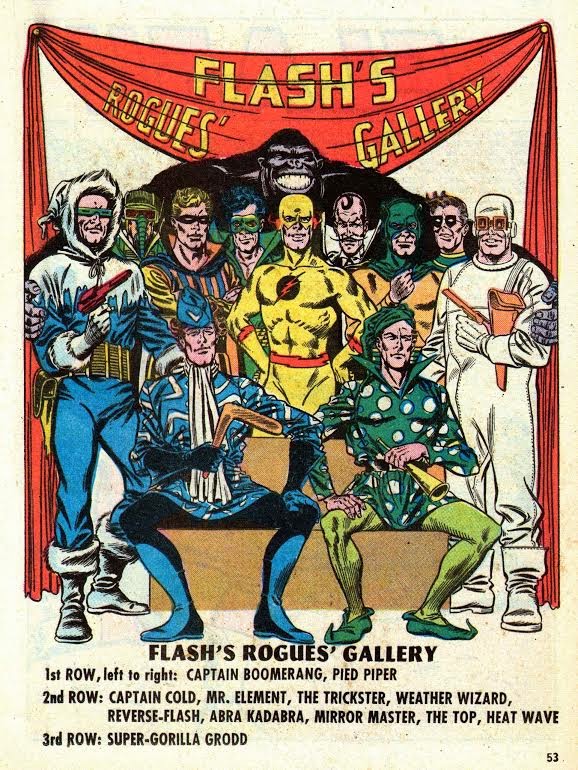 Here's a few more fast facts on later members of the Flash Rogue's Gallery (and one who really wasn't!).

Technically, the first appearance of Flash's Rogue's Gallery was in 80 Page Giant #4 (October, 1964), but there were no new stories in that issue...instead, it contained reprints of earlier Flash tales...and a pin-up of all of Flash's foes by Carmine Infantino and Murphy Anderson, and included those who would become the charter Rogue's Gallery (Captain Cold, Mirror Master, the Top, Heat Wave, Captain Boomerang and Pied Piper), as well as a few who were never members of the group, like Mr. Element, Reverse-Flash, Abra Kadabra and future members Weather Wizard and Trickster! 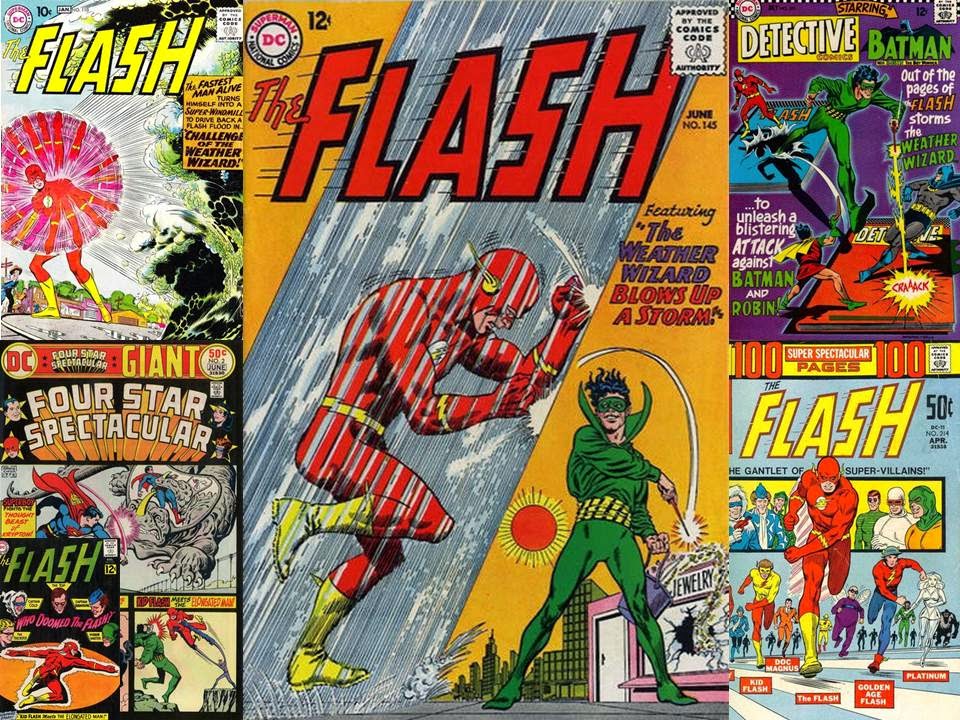 Origin: Mark Mardon found his Weather Wand in his dead brother Clyde's lab (maybe Mark killed him?), and, after meeting with tailor Paul Gambi, was using the Wand to rain on the Flash's parade for years by making storms, lightning and more!  Weather Wizard also was the first of Flash's foes to branch out, fighting Batman, Superman, Wonder Woman & Plastic Man, Aquaman, Hawkman and more, even updating his costume! 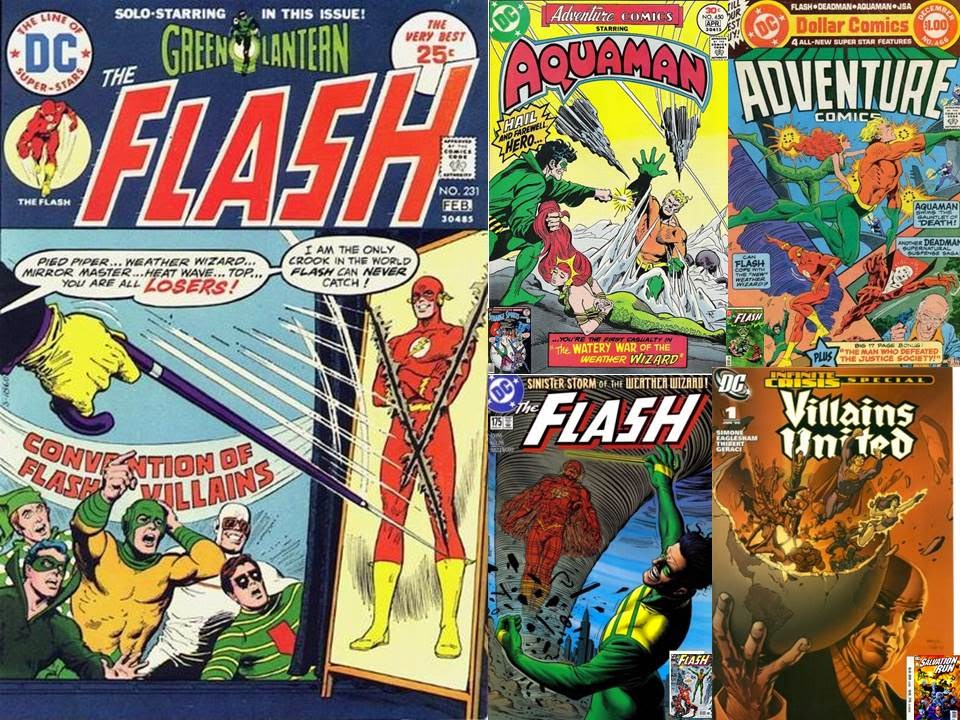 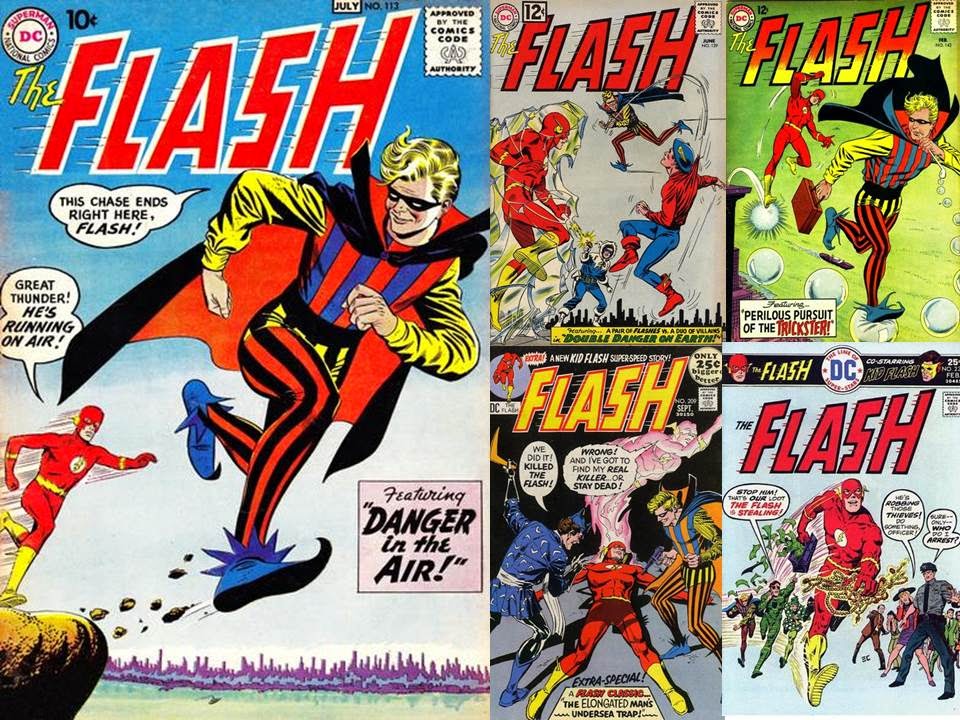 Origin:James Jesse Jesse was a trapeze artist with a problem...a fear of heights.  Jesse developed a pair of "air walker shoes" and some other practical joker gimmicks, turning to a life of crime (and battles with the Flash, and was the first of Barry's foes to work with another - Captain Cold - to battle Barry and Jay in Flash #129).  Jesse started to go straight, first working with Blue Devil, and then after the other Rogues lost their souls to Neron, but...it never quite stuck. 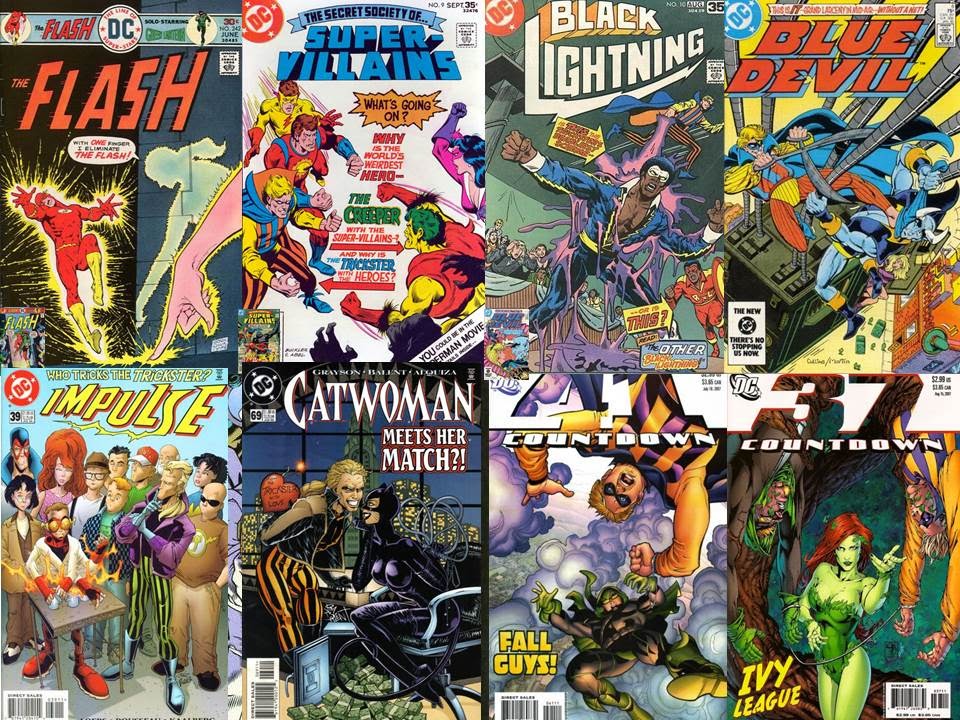 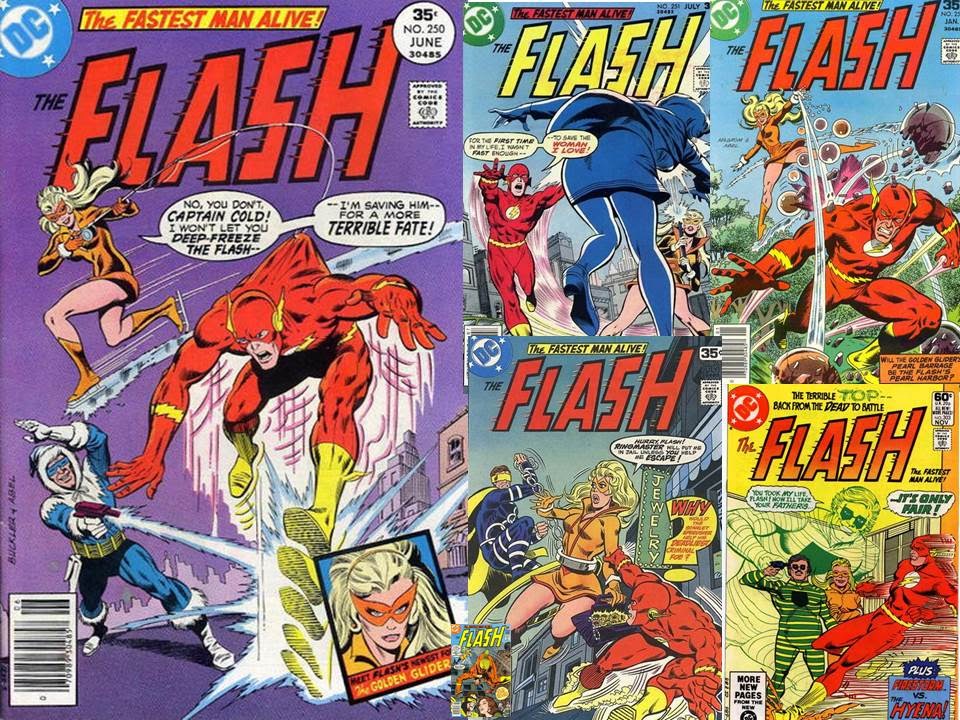 Origin: Lisa Snart was the sister of Captain Cold, and wanted her never to be near the Rogues.  So, what does she do....but date the Top (who teaches her spinning moves she uses as an ice skater).  After the Top died, Lisa became the Golden Glider (getting ice skates that allowed her to fly and other jewelry and cold related weapons to use against the Flash).  She manipulated other men, like the Ringmaster and Chillblaine (providing cold weapons to a multiple of Chillblaines, until the last one killed her). 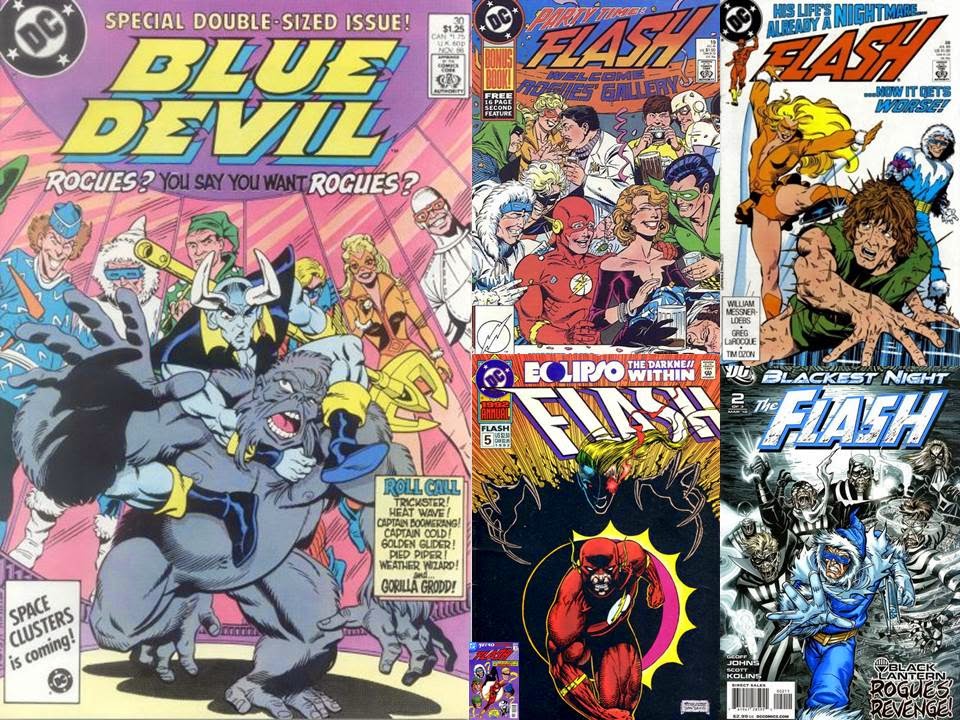 Team Membership: Rogues (started working with in Blue Devil #30, but not really a team player) 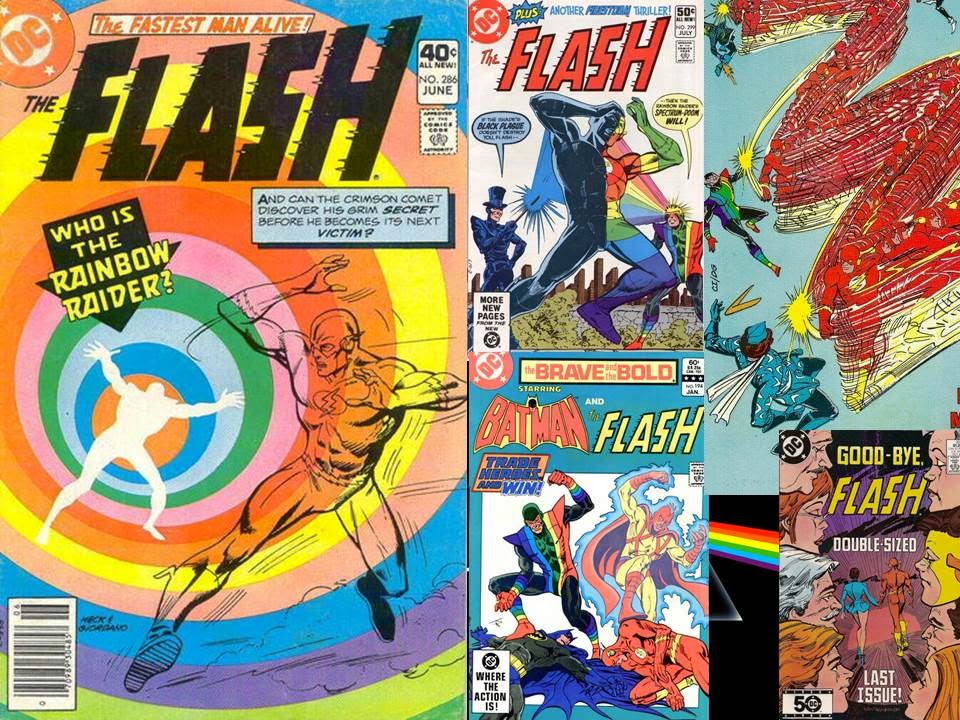 Origin: Roy G. Bivolo wanted to be an artist, but...he was color-blind!  That didn't deter him, instead he invented "prisma-goggles" which allowed him to manipulate light to his will, and started to steal art for himself!  Flash stopped him, again again, even when he worked with the Shade and Dr. Double X.  Rainbow Raider then joined the Rogues just as Barry Allen faded away for a time...and then fought Booster Gold, and had this technology given to Captain Atom's foe, Dr. Spectro.  When new Rogues formed, Blacksmith didn't really have a use for Roy... 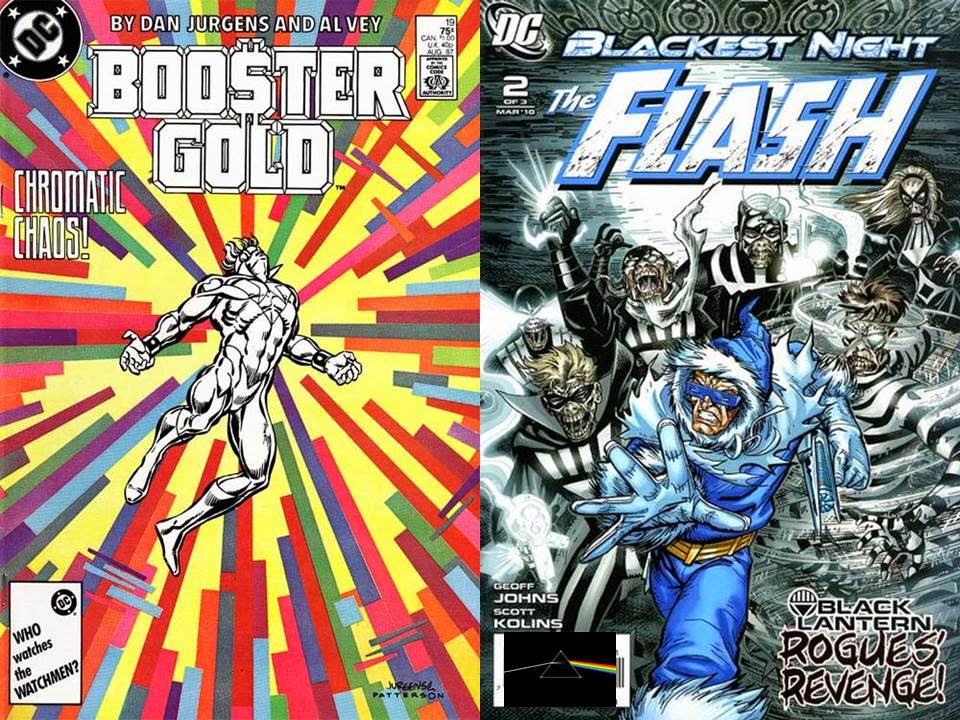 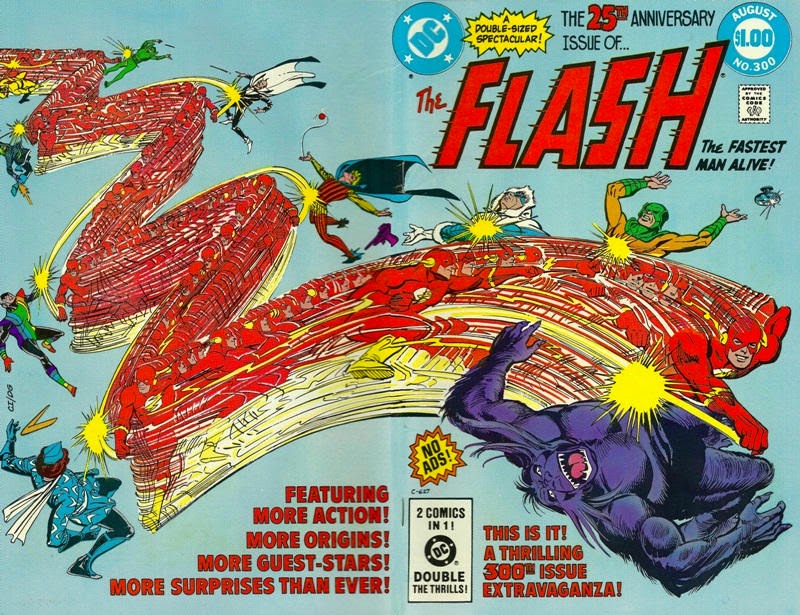 That sums up the Silver Age Flash's Rogue's Gallery in all it's glory...

...other villains joined, like Blacksmith, Girder, Murmur and more..