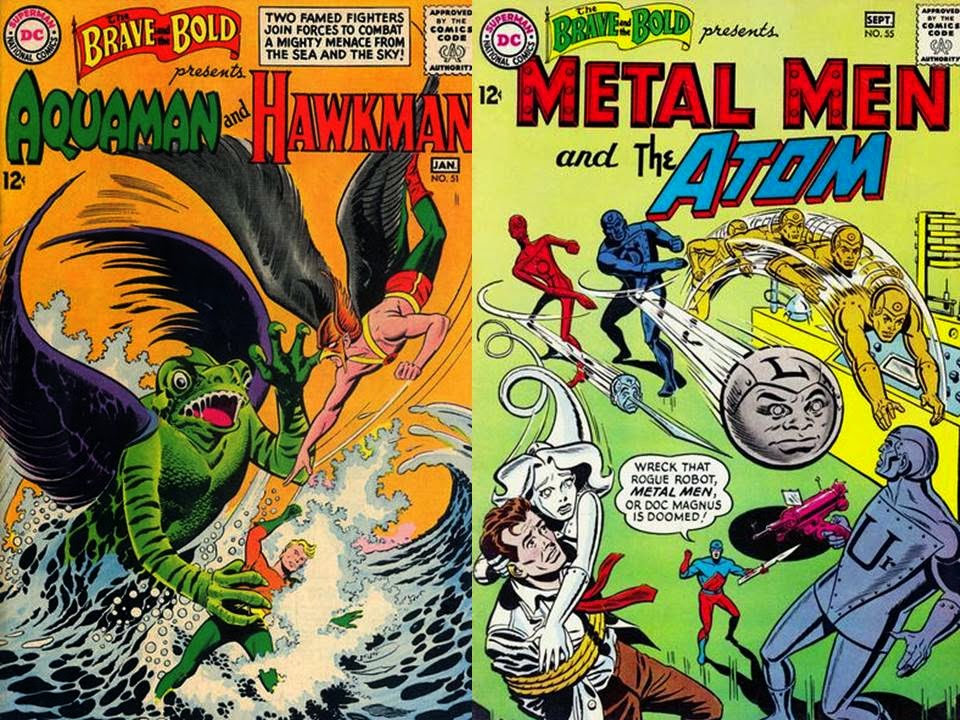 It's getting down to the last of the original Brave and the Bold team-ups without Batman....

....and it's getting pretty interesting, with returning stars and new arrivals!

Only one of the heroes didn't return and if you have read the first and second articles, you'll know who! 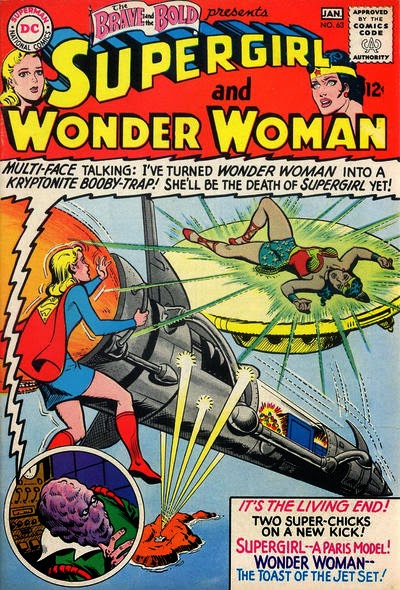 The women took charge for once in Brave and the Bold, with Supergirl and Wonder Woman teaming up in Brave & the Bold #63 (December-January, 1965/1966 by Bob Haney and John Rosenberger, and a cover by regular Supergirl artist, Jim Mooney). Superman editor Mort Weisinger usually didn't allow Superman characters outside of titles he edited, and this tale called "The Revolt of the Super-Chicks"....didn't help much.  Not that was horribly different than tales of the times, but it would NOT be considered a high point of women's lib as Supergirl planned on retiring from being a super-hero, and Superman recruited Wonder Woman to help convince her back into battle...and the two end up dating Frenchmen (Henri for Supergirl, Andre for Wonder Woman) for a time, and fighting the shape-changing Multi-Face!  Eventually the ladies beat the villain and go back to their normal lives (and this issue has an appearance of Wonder Girl between Showcase #59 and Teen Titans #1, establishing her as a separate person from Wonder Woman....).  It also takes a little work to find this issue as it has NOT been reprinted... 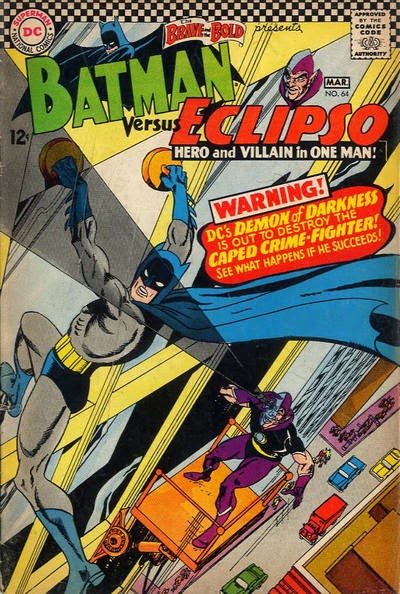 Brave and the Bold #64 (February-March, 1966) had Batman vs. Eclipso, and that's covered more under supernatural characters (and Batman team-ups).


That said, it was a very good issue, and has been reprinted in color in Super-Team Family #5 (June-July, 1976) as well as in the black and white Showcase Presents The Brave and the Bold Batman Team-Ups #1.


This second team-up of Batman's in B&B is a well done tale! 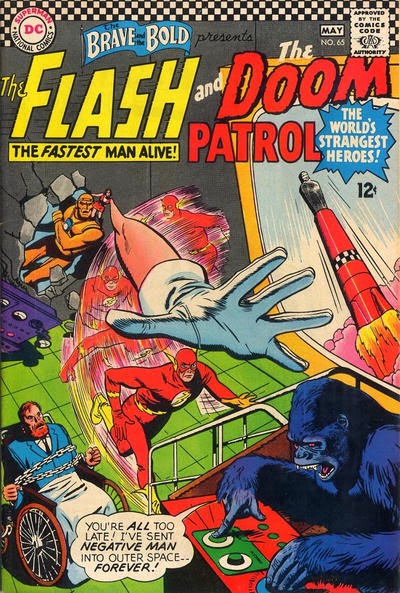 With Brave and the Bold #65 (April-May, 1966), it was a chance for previous B&B star, the Flash, to return....and meet a new DC Super-Team....the misfits of the Doom Patrol (Robotman, Elasti-Girl, Negative Man and the Chief) in this Bob Haney story of "Alias Negative Man", with art by Dick Giordano and Sal Trapani.  The Doom Patrol's foes, the Brotherhood of Evil (the Brain, Monsieur Mallah, Madame Rogue, Garguax and General Immortus) captured the Negative Man, and his team recruit the Flash to try to fool the villains into releasing him...it didn't quite work, but the Brotherhood was defeated and Negative Man freed.  A pretty good issue, other than the Flash seemed like an also-ran (as he wasn't much of a part of the story, being more of a device instead of a character).

Even more annoying is that this story, which read like it could have been in an issue of Doom Patrol, was NOT reprinted (even in the Doom Patrol Archives or Showcase Presents the Doom Patrol). 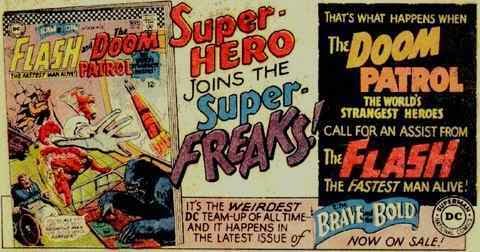 The Doom Patrol also never returned to B&B (but being labeled freaks in the ad for this issue might have hurt their feelings...).

Flash would return many times to work with Batman... 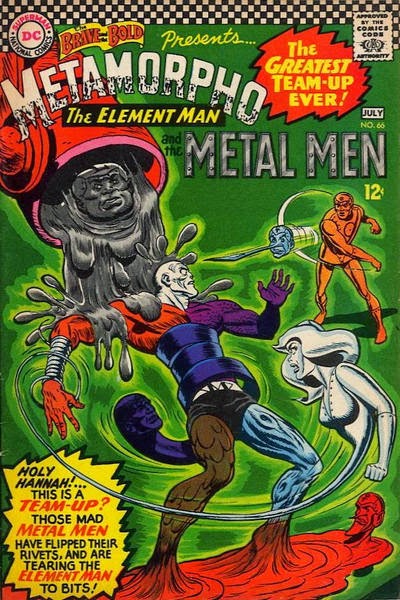 Brave and the Bold #66 (June-July, 1966) let Bob Haney team his own creation (Metamorpho) with one of his favorite B&B co-stars (the Metal Men) in the Mike Sekowsky drawn "Wreck of the Renegade Robots" (with a cover by Ramona Fradon, Metamorpho's co-creator).

Both sides get interesting things to do as Metamorpho approaches Doc Magnus to try to cure him of his condition of being the Element Man.  While doing this, Prof. Kurt Borian takes control of the Metal Men, turning them against their creator, and Rex Mason has to have the Doc turn him back into Metamorpho to save the rogue robots (as Prof. Borian plans to go after Simon Stagg) and might put Rex's love, Simon's daughter Sapphire, in danger.  Back as Metamorpho, Rex fights the Metal Men, destroying the device that controls them....and losing his one time cure. 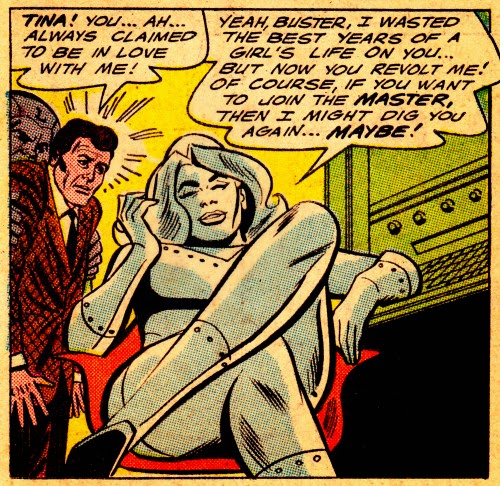 Sadly, this story has only been reprinted in black and white, in both Showcase Presents Metamorpho #1 (and only) and Showcase Presents Metal Men #2,  as I answer the question posed on the cover that this is a team-up, and a great one at that!  Both Metamorpho and the Metal Men would return repeatedly, and even team-up with Batman and other B&B co-stars like Plastic Man and Green Arrow.  "According to E. Nelson Bridwell, Metamorpho's pairing with the Metal Men in B&B 66 was one of the book's best-selling team-ups ever" according to John Wells' American Comic Book Chronicles: 1965-1969. 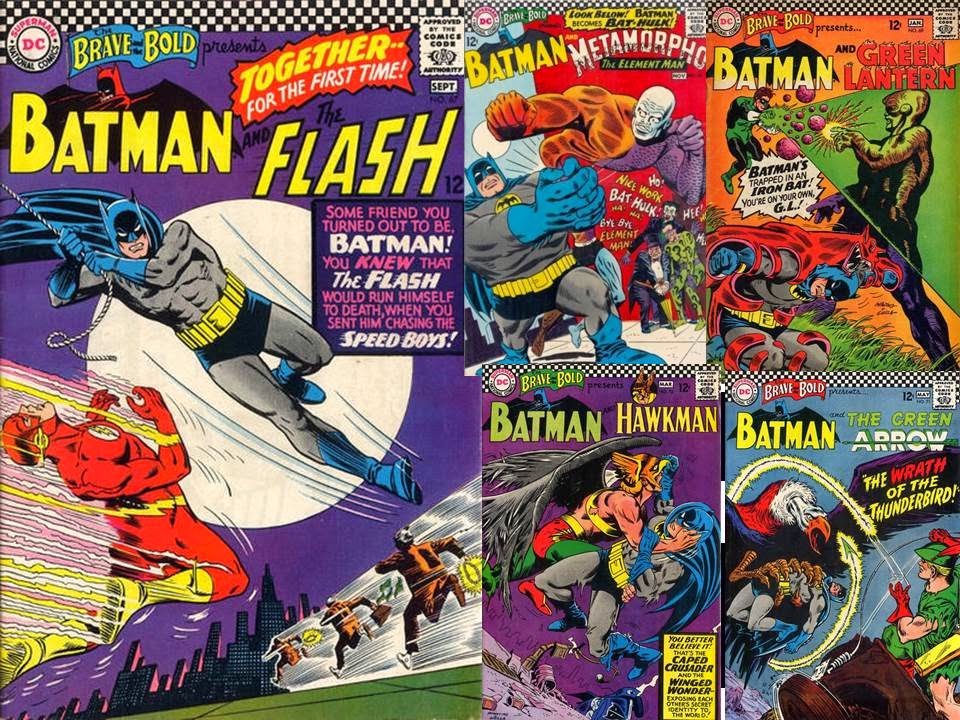 A Ghost of A Chance 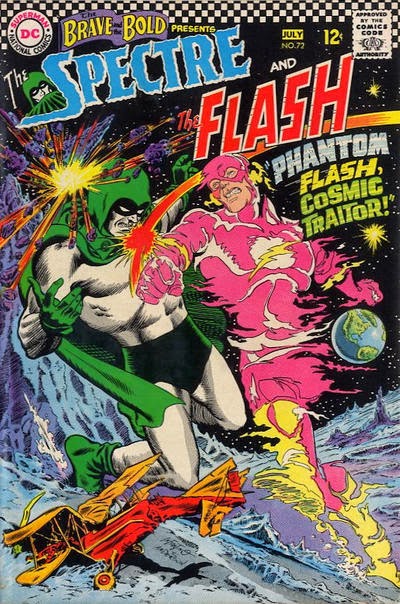 Flash took a trip to Earth-2, and end up being caught by some criminals, who gave the speedster to the Ghost Ace (the spirit of Luther Jarvis, a World War I fighter ace) who wanted revenge against his fellow squad members.

The Ghost Ace turns Flash into a spectral being, and the Spectre gets involved in the case, preventing the murder of the pilots, and eventually frees the Flash and defeats the Ghost Ace.

This title also served as the transition book for the Spectre, as he went from his three Showcase try-outs to his 1960s Spectre book, and can be found reprinted in the Showcase Presents: the Spectre #1! 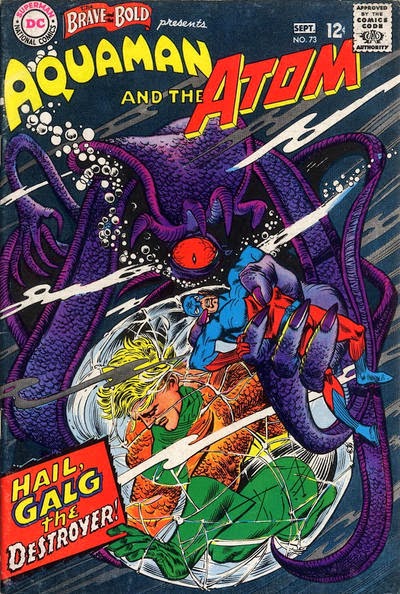 Brave and the Bold #73 (August-September, 1967) was a meeting of two previous stars in B&B, with the Atom and Aquaman facing off against the evil mutant plankston monster in "Hail, Galg the Destroyer!" which, in this story by Bob Haney and art by Howard Purcell (and cover by Carmine Infantino).

The story had Aquaman, Aqualad, Mera, Vulko and Aquababy, so even though Atom was there, it did read like an Aquaman story (so much so that it's only reprint is in Showcase Presents: Aquaman #3)... 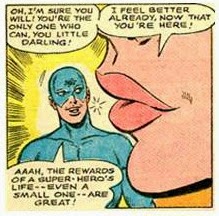 ....but at least the little man got a kiss from Aquaman's wife, Mera, so it all work out pretty good in the end for Ray Palmer! With that happy note (and Brave and the Bold #74 of October-November, 1967), Batman took on the regular star role of Brave & the Bold, "a post that he held until the book ended in 1983" (quote also from the American Comic Book Chronicles: 1965-1969).  All but Eclipso and the Doom Patrol returned to team with Batman...but it was still possible to have some fun without the Caped Crusader, as Bob Haney and others showed so well!