Superman vs. Flash Run For Your Life 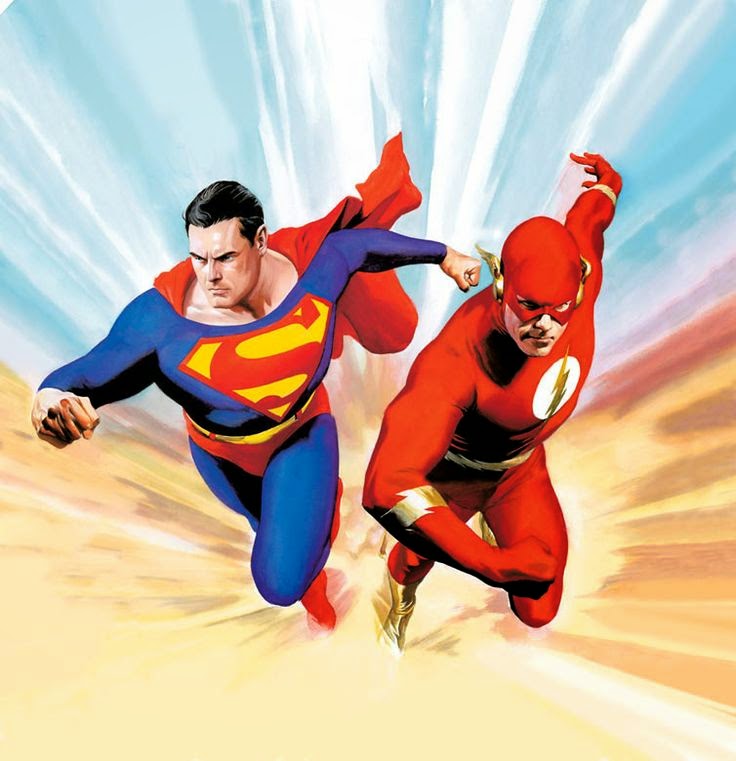 That’s what the Man of Steel and the Scarlet Speedster had to do…to decide who really was the fastest man alive…and that’s what they have done, and done again and will do again as well!

It all happens so fast…as these two Justice League members race like school children!

But, let’s take a step back and start at the beginning of the race, shall we?


Superman’s Race With The Flash 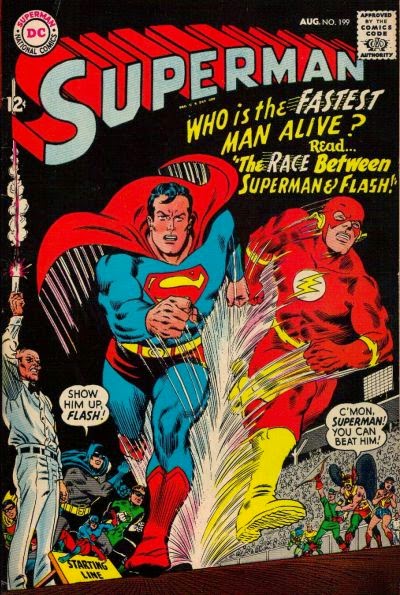 It all started with Superman #199 (August, 1967) in a story by Jim Shooter with interior art by Curt Swan, and a cover by Carmine Infantino.  Superman (Clark Kent) and Flash (Barry Allen) were to race to help raise funds for the United Nations…until mobsters decided they wanted a piece of the action.

No winner decided here, though…

The Race To The End Of The Universe! 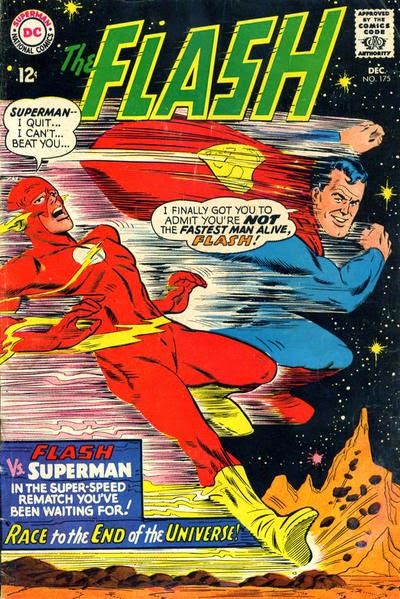 Next up, Flash #175 (December 1967, cover by Carmine Infantino, story by E. Nelson Bridwell and art by Ross Andru) provided the first rematch, and, along with the JLA, added a few Flash foes like the Weather Wizard, Abra Kadabra and Reverse-Flash to the mix, and friends like Flash Museum curator Dexter Myles…as the race was organized by Rokk and Sorban, two alien gamblers who Superman, Batman and Robin had last encountered in World’s Finest Comics #150.

Still no winner here though…

The Greatest Race Of All Time! 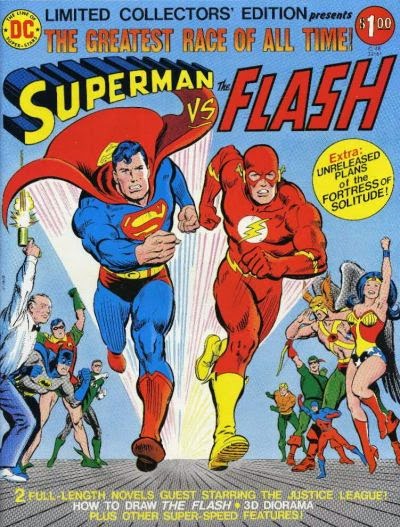 Worth noting now, as Carmine had worked on the races in the past (and around this time worked on the first Superman/Spider-Man book, along with Ross Andru and others), and Jose was to do some important Superman/Flash work in the future! 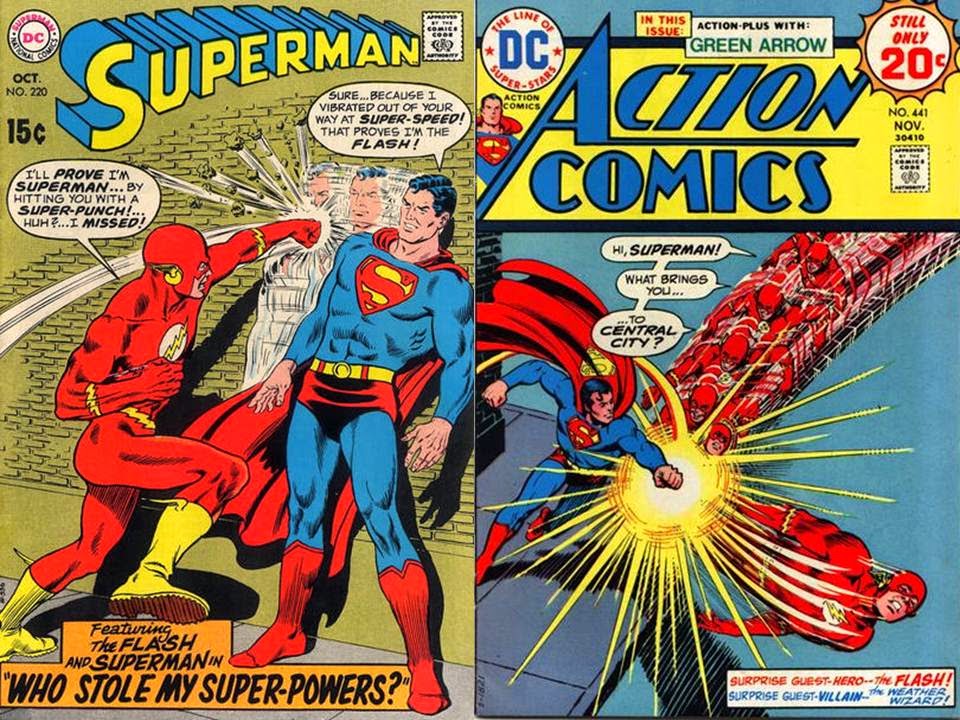 Now, time to detour a bit more, as though Superman and Flash worked together regularly in the Justice League of America, they still didn’t meet that much in their own books…though Barry Allen tried to fill Superman’s boots in Superman #220 (October 1969, by Jim Shooter and Curt Swan) with Clark Kent being the Flash, and later, Superman and Flash had a little run in as seen in Action Comics #441 (November 1974, by Cary Bates and Curt Swan, with cover by Nick Cardy, and Green Arrow back-up story, not related to the main story), but these weren’t races…as the race was decided finally between these issues!

Race To Save The Universe! 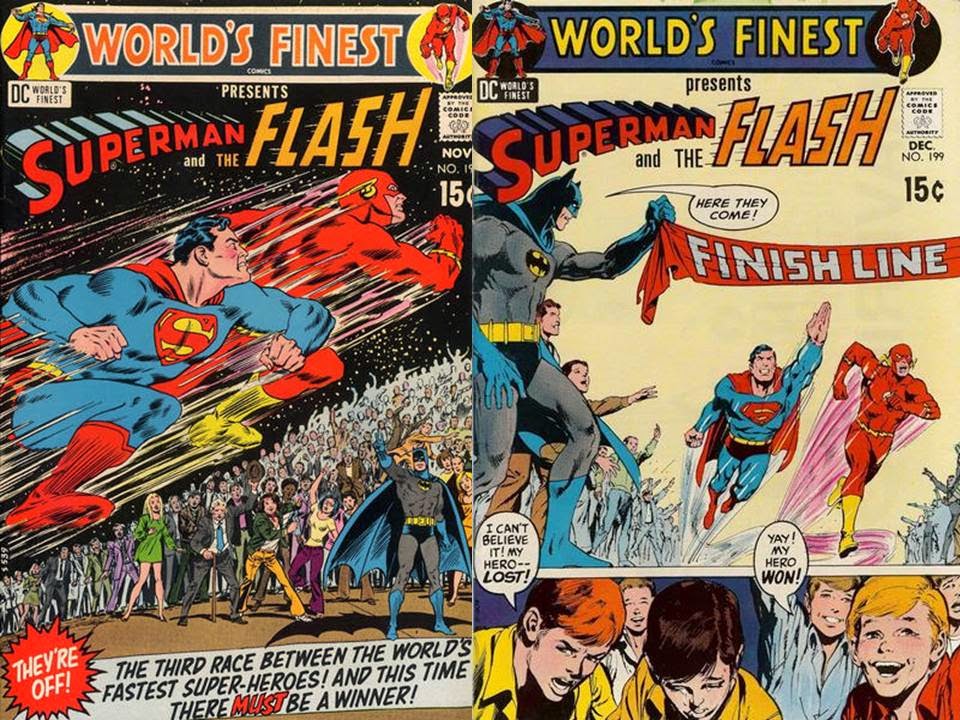 Breaking from Superman and Batman team-ups came World’s Finest Comics #198-199 (November-December 1970, with covers by Curt Swan and Neal Adams respectively, and interiors for both done by writer Dennis O’Neil and artist Dick Dillin), wherein Superman teamed up with Flash at the behest of some mystery foes (read about them here), and the title of who was the Fastest Man Alive was decided as the heroes raced across the galaxy…and more!  No spoilers, but, there was a winner!

Chase To The End Of Time! 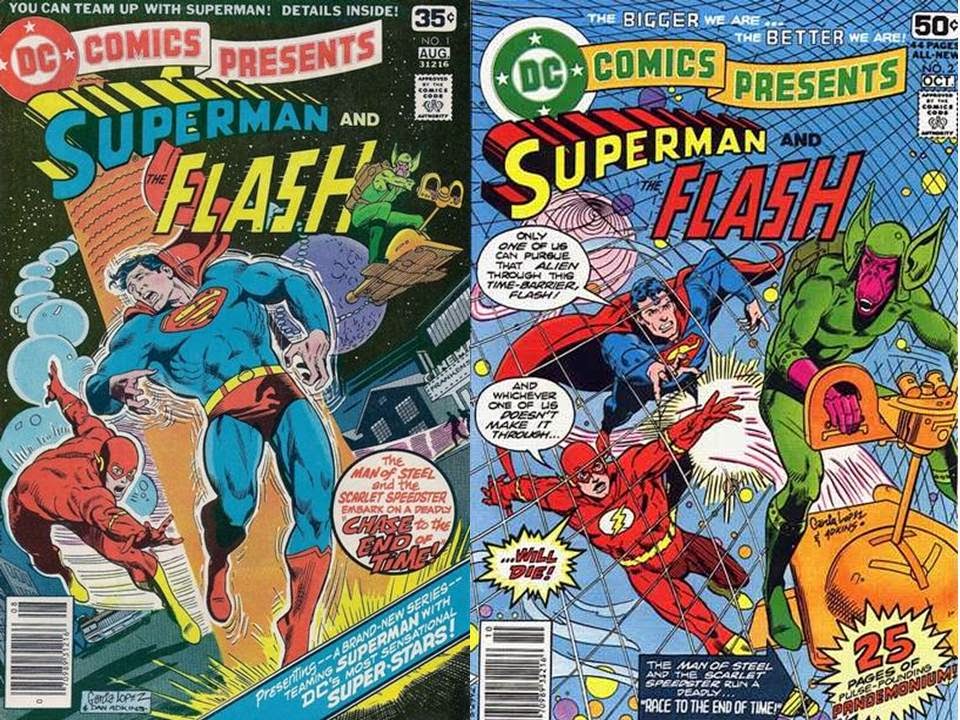 Still, the racing went on, and Superman and the Flash kicked off the new Superman team-up book with DC Comics Presents #1 and 2 (July-October 1977 by writer Martin Pasko and artist Jose Luis Garcia-Lopez), wherein Superman and Flash had to race through all of time thanks to two alien races at war (the Volkir and the Zelkot),  to see who was the fastest, and along with way ran into the Reverse-Flash and the Legion of Super-Heroes (though not at the same “time”…Professor Zoom was in the 25th Century, and the Legion was in the 30th).

The pair went to the end of time, and looped around to their starting point to finish this one… 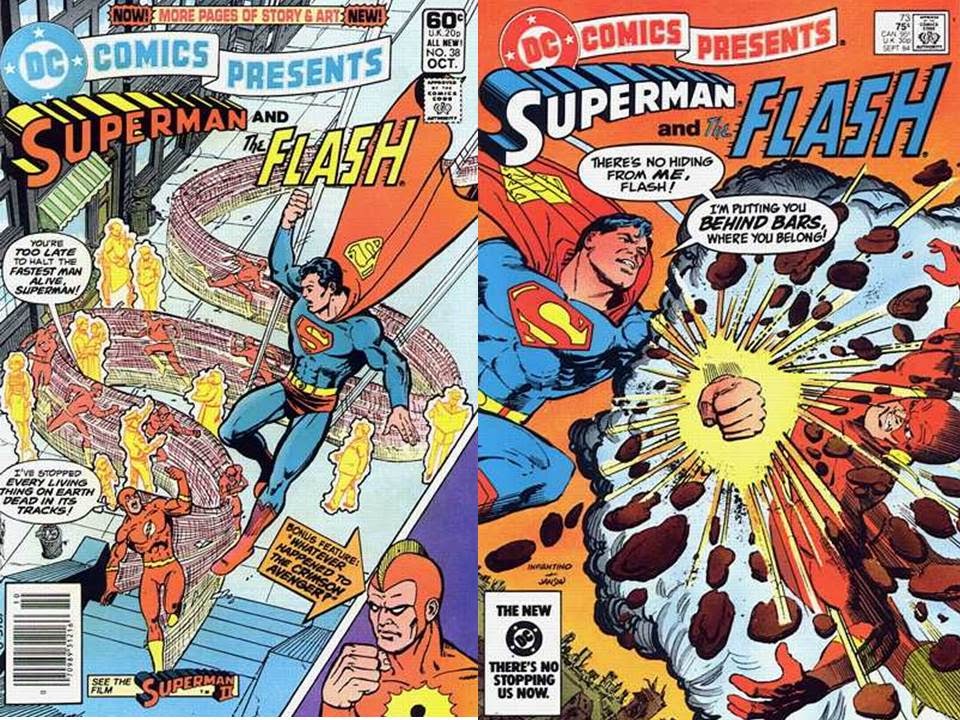 Superman and Flash ran into each other a couple of times later outside of the Justice League book, with DC Comics Presents #38 (October 1981 story by Martin Pasko and art by Don Heck, with a George Perez cover) and #73 (September 1984, by Cary Bates and Carmine Infantino), but these weren’t really races and get mentioned…mostly because of the great covers!  Also of note, in DC Comics Presents #38, was a great story on the Crimson Avenger, and a two-page spread featuring Superman and all his DCCP co-stars, drawn by George Perez!

Who Is Really The Fastest Man Alive? 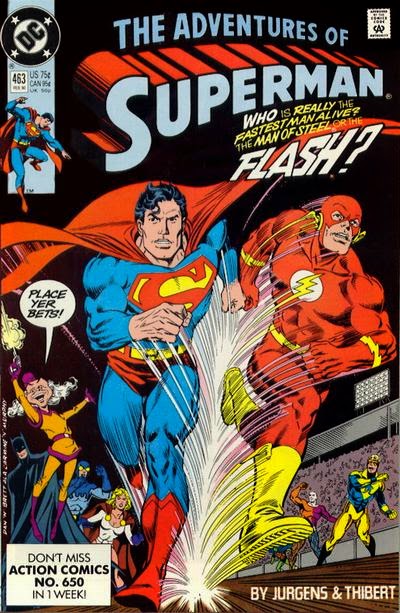 Adventures of Superman #463 (February 1990, by Dan Jurgens, as both writer and artist for this issue) tried to answer that, with a race between Superman and the new Flash, former Kid Flash Wally West.  This time the race was instigated by Mr. Mxyzptlk (the 5th dimensional imp who bedevils Superman), and folks like Lex Luthor, and both the Justice League America and Europe were involved…

…and this race even continued over into other DC Comics that month like Hawk & Dove and New Gods (though the racers were just in the background…).

This kept the race going for a time… 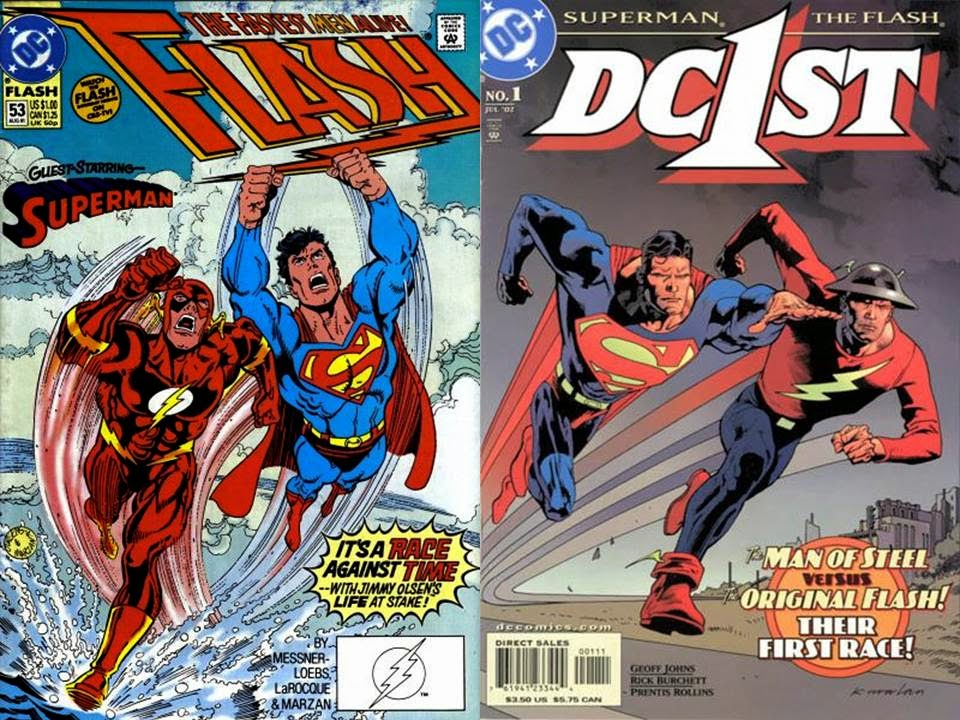 Superman and Flash (Wally) raced again in Flash #53 (August 1991 by William Messner-Loebs and Greg LaRocque, and a cover by Dan Jurgens), and a little later, Superman raced the original Flash (Jay Garrick) in DC First: Flash/Superman #1  (July 2002 by Geoff Johns and Rick Burchett and cover by Kevin Nowlan) to save Wally’s life from Abra Kadabra in an homage to all the previous races.

Mostly with these, you can see how Wally West matured as the Flash, and Superman really didn’t gain any ground on his racing… 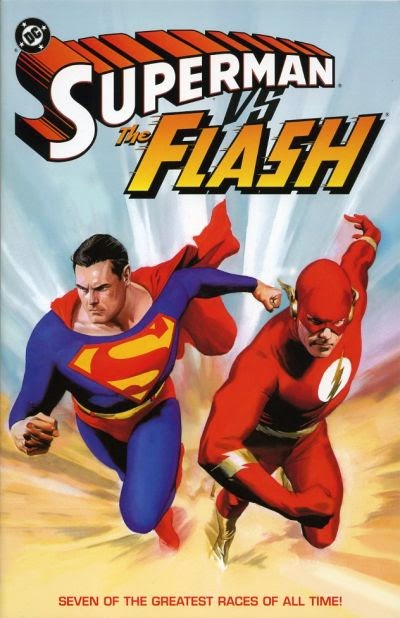 Most of the issues here (well, Superman #199, Flash #175, World’s Finest Comics #198-199, DC Comics Presents #1-2, Adventures of Superman #463 and DC First: Flash/Superman #1 at least) were gathered in the Superman vs. Flash tradepaperback in 2005, with a cover by Alex Ross…
…proving the time is circular, not unlike proven during one of the races between these two super heroes!

This is also a nice, easy way to get a good start with all that racing, without having to run out your funds paying for expensive back issues…and looks great on any bookshelf when you have time after your daily run! 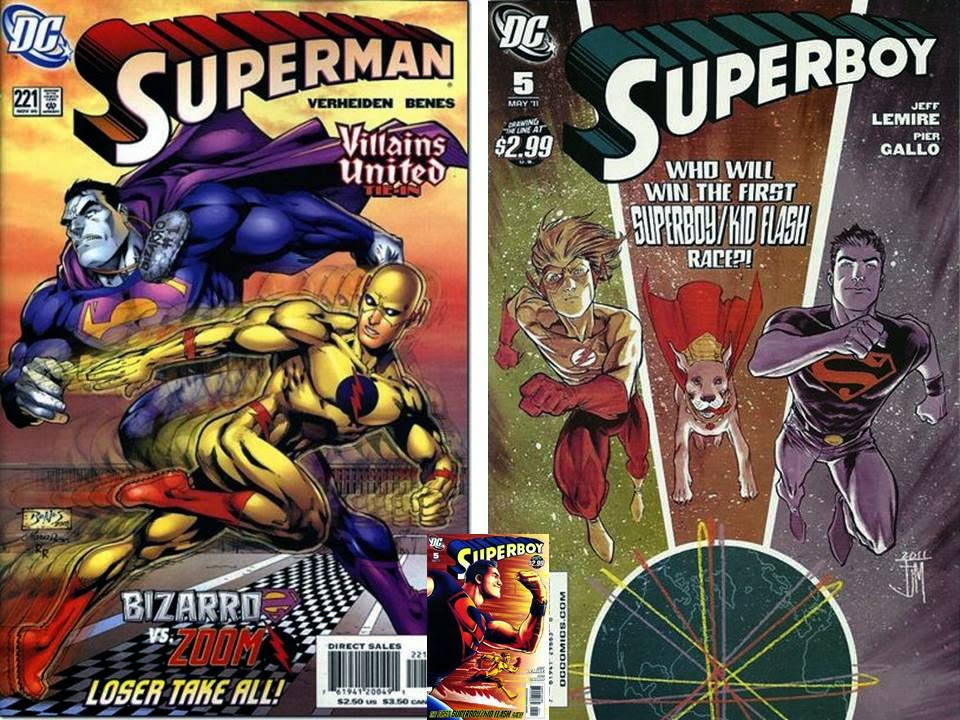 Superman foe Bizarro and Flash foe Zoom even raced once, in Superman #221 (November 2005 by writer Mark Verheiden and artist Ed Benes) in a battle of the opposites, and Superboy (Kon-El, the clone of Superman) raced with the second Kid Flash (Bart Allen – he who was formally Impulse) in Superboy #5 (May 2011, by Jeff Lemire and Pier Gallo, and cover by Francis Manapul).

No ruining these races for you, but they were different to say the least! Superman and Flash still race to this day, whether it be in the Superman: The Animated Series (in “Speed Demons”, aired September 13, 1997, written by Rich Fogel and directed by Toshihiko Masuda, wherein the race was interrupted by the Weather Wizard).  They’ve even raced live in Smallville (in “Run”, aired October 20, 2004, written by Steven S. DeKnight and directed by David Barrett), though this involved a younger Bart Allen (played by Kyle Gallner) who was Impulse and Kid Flash in the comics as well and Bart continued to run in and out of Smallville, even meeting Smallville’s Green Arrow, Aquaman, Cyborg and Black Canary along the way). 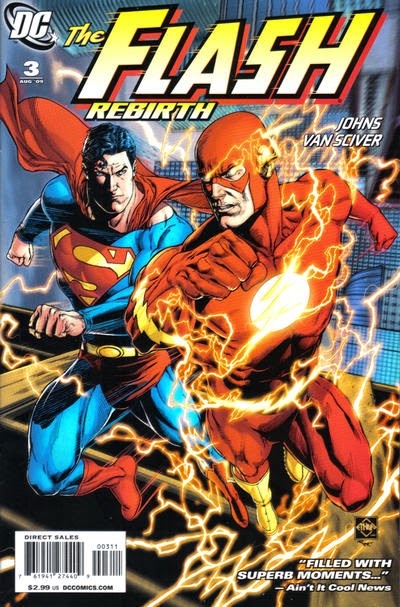 Barry Allen returned, and so did Superman/Flash races…with Flash: Rebirth #3 (August 2009, by Geoff Johns and Ethan Van Sciver).  Ironic that Flash should return in the Arrow show (with Geoff Johns a co-writer on “The Scientist”, along with Andrew Kreisberg and Greg Berlanti, debuting on December 4th, 2013, with Grant Gustin as Barry Allen)…and the Flash has his own show starting in October, 2014 on the CW! 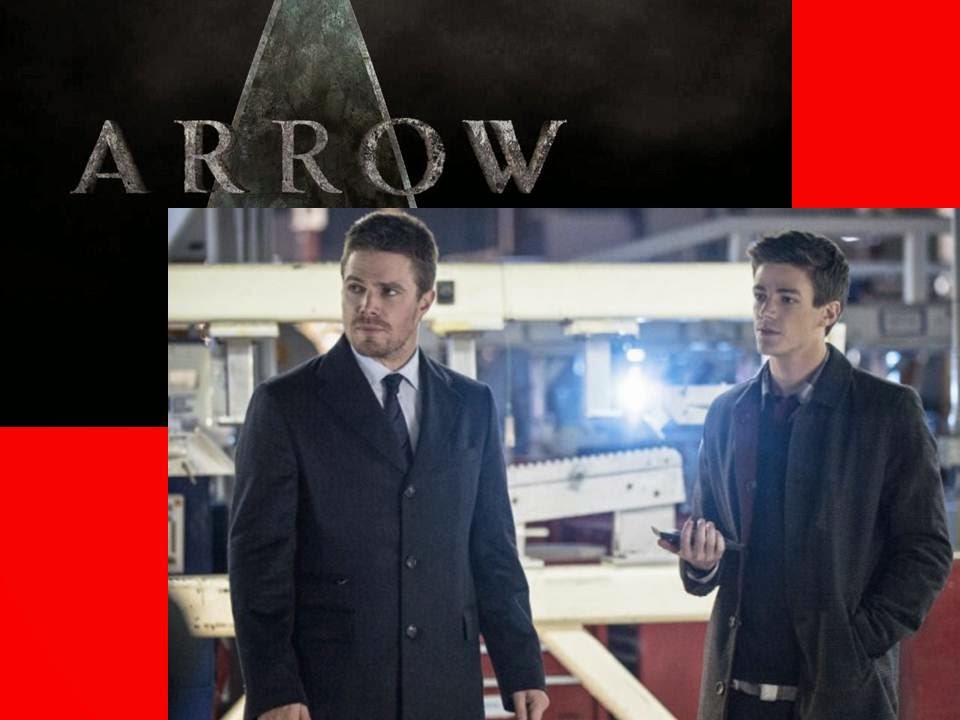 …but Superman and Green Arrow had a little in common in comic history, but Flash never really raced the Emerald Archer!
Posted by Dave's Not Here Comic Blog at 7:00 AM