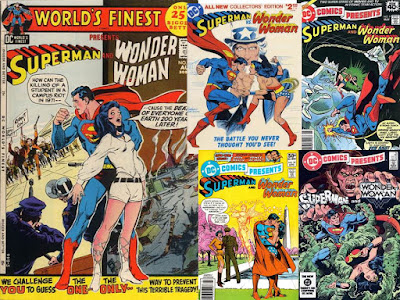 Not to be outdone by his friend (and occasional rival) Batman, Superman also had a couple of team-up books back in the day, when comic titles only rarely interacted with each other.

Let's take a look back at the meetings of the Man of Steel and the Amazing Amazon! 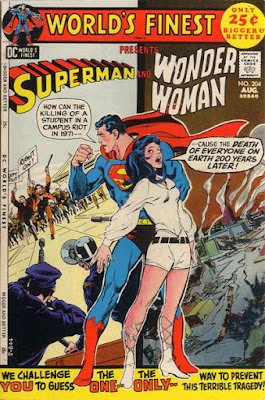 First up (though not their first meeting) is World's Finest Comics #204 (August, 1971) under a cover by Neal Adams and Dick Giordano, with a story by Denny O'Neil, Dick Dillin and Joe Giella entitled "Journey To The Edge of Hope".  This was the de-powered, Wonder Woman, Diana Prince, and she and Clark Kent ended up at a computerized dating service, then ended up in a future desolate Earth, brought there by a rogue computer, hoping to stop this horrible future!


This has been reprinted in the Diana Prince: Wonder Woman tradepaperback #3 of 2008. 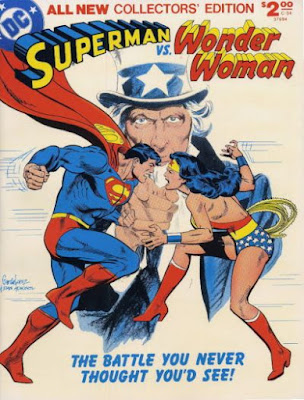 The next pairing of Superman and Wonder Woman in All-New Collector's Edition C-54 (1978) was a little different than the others....as it was the Earth-2 versions of the characters, and so much bigger, as it was in an over-sized tabloid edition, under a cover by Jose Luis Garcia-Lopez and Dan Adkins!  The story by Gerry Conway, with pencils by Jose Luis Garcia-Lopez and inks by Dan Adkins was "Superman vs. Wonder Woman", with the two heroes facing off in June, 1942, dealing with Baron Blitzkrieg and Sumo the Samurai (who both had later appearances in All-Star Squadron, but, thanks to this and those being historical comics, those appearances take place before the ones here!) as well meeting with FDR and dealing with the potential of an atomic bomb and the Manhattan Project!

This story has been reprinted in the Adventures of Superman: Jose Luis Garcia-Lopez hardcover of 2013 (though only in normal size....). 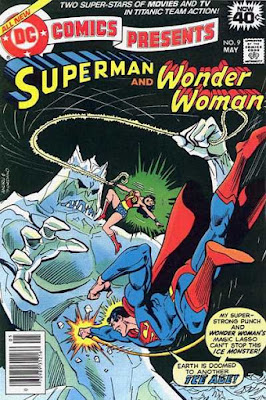 Superman's large team-ups and work with Batman led to him getting his own team up title, and the first adventure with Wonder Woman (back in her regular costume and with all her Amazonian powers) was DC Comics Presents #9 (May, 1979) with the "Invasion of the Ice People" by Marty Pasko, Joe Staton and Jack Abel, under a cover by Ross Andru and Dick Giordano.  This time, Superman and Wonder Woman heat things up facing off against aliens invading Earth by possessing ice sculptures.


This tale found itself reprinted in one of the longest titled books, Showcase Presents: DC Comics Presents: The Superman Team-Ups volume 1 in 2010 in glorious black and white! 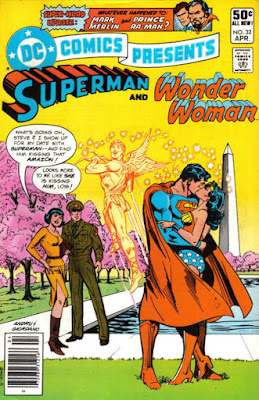 Next pairing of Wonder Woman and Superman was in DC Comics Presents #32 (April, 1981) with a cover by Ross Andru and Dick Giordano, and interior work by Gerry Conway, Kurt Schaffenberger and Vince Colletta, with "The Super-Prisoners Of Love", wherein Wonder Woman spurns Eros, so he shoots his love arrows into Superman and Wonder Woman, much to the frustration of Steve Trevor and Lois Lane!

This odd love pentagon worked itself out in the end, returning to normal, but sure got hearts beating!

This hot and steamy story was reprinted in black and white in Showcase Presents: DC Comics Presents: The Superman Team-Ups volume 2 in 2013!

It's also worth noting that Wonder Woman did assist Superman and Batman (and Zatanna and Flash) with Dr. Zodiac sometime after this appearance.). 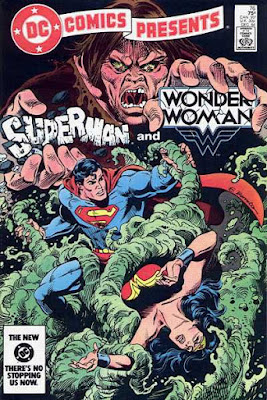 Last, but not least in the solo Superman/Wonder Woman pairings was DC Comics Presents #76 (December, 1984) with Superman and Wonder Woman facing "Living Clay...Killing Clay" under a cover and with art by Eduardo Barreto and story by Dan Mishkin and Gary Cohn.  The heroes faced off against Dr. Christine Cade, a former Amazon who was using living clay (the same material Wonder Woman was made of) to create creatures that would do her bidding....and Christine also used it on herself (making herself into a monster, which didn't turn out good for her....).  This issue also featured a cameo by Lyla and the Monitor, like many comics in the DC line in 1984 and 1985, setting up for the Crisis On Infinite Earths, which ended the Silver Age Wonder Woman and changed Superman. 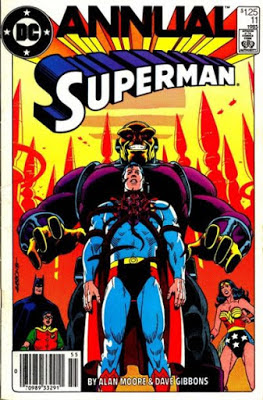 Soon after this issue, Wonder Woman, Batman and the new Jason Todd Robin surprised Superman on his birthday (but not as good as Mongul did with a Black Mercy!) in Superman Annual #11 of 1985 (and more on that here).


So, Superman and Wonder Woman have made quite the couple over the decades!
Posted by Dave's Not Here Comic Blog at 3:32 AM