Coming at you soon, the latest in Marvel action figures, wave two of the new Marvel Legends 3 and 3/4th line! 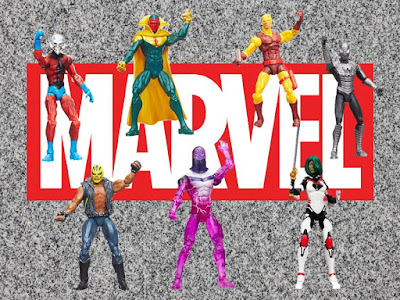 True, we've seen Ant-Man before, but his movie was so successful, Vision also gets a figure update in a more recent look, Daredevil goes back to his original costume that only a blind man could love, Spider-Man comes out in an armored version of his costume pre-Iron Spider, and new figures for Rage (of the Avengers), Living Laser (of the Lethal Legion) and Gamora (of the Guardians of the Galaxy).

Not the greatest of released, but something to help you pass the time while pumping your fist in the air waiting for more releases!
Posted by Dave's Not Here Comic Blog at 9:30 AM