Superman The Night Of March 31st 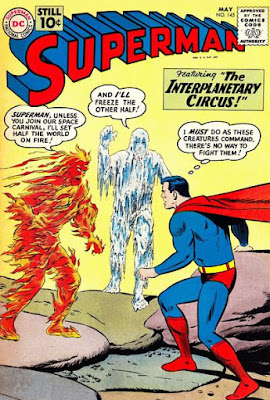 Back in the Silver Age, it was not uncommon to have multiple stories in any one issue, and Superman #145 (May, 1961) was one of those!

In the first story, Superman faces off against the anti-Superman gang with "The Secret Identity of Superman", story by Jerry Siegel and art by Curt Swan and Stan Kaye, and the second (featured on the cover) dealt with the time "The Interplanetary Circus" came to Metropolis and tried to recruit Superman (cover by Curt Swan and Stan Kaye, and this story by Robert Bernstein and Al Plastino). 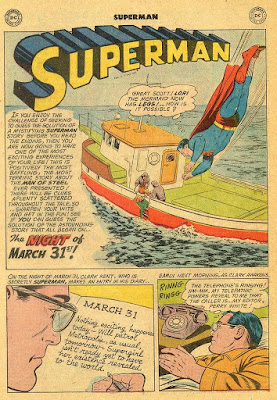 The third story was "The Night of March 31st!" by Jerry Siegel, Curt Swan and Sheldon Moldoff....oh, and what a story it was!


Lori Lemaris the mermaid has legs?

Clark has telepathic powers he uses on a telephone when he awakens the next day?

Clark changes to Superman with an audience as Mr. Mxyzptlk woos Lois?

Lana Lang attacks Superman, with Luthor, Brainiac and Bizarro coming to his rescue?

What is going on here? 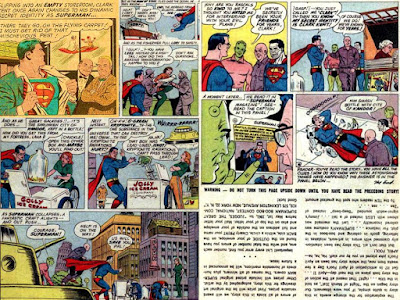 What, what day is after March 31st?


This story has been reprinted a few times, in Adventure Comics #339 (December, 1965), The Greatest Superman Stories Ever Told from 1987, and in glorious black and white in Showcase Presents Superman Volume #2 in 2006. 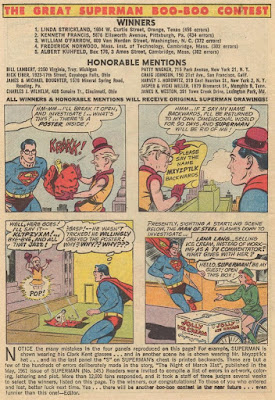 Here's the explanation, and winners of "The Great Superman Boo-Boo Contest" from Superman #149 (November, 1961)...

....but I'll leave it to you to find the story and list the errors!

Posted by Dave's Not Here Comic Blog at 3:50 AM